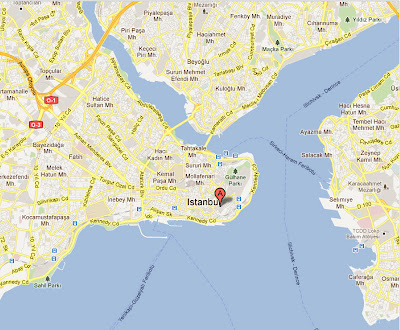 Istanbul today is a thriving, vibrant "mega city" of some 12 million people straddling two continents.  Historically it was first the Greek colony of Byzantium, then the Roman and Byzantine capital of Constantinople, and later the capital of the Ottoman Empire.  Today is serves much the same commercial and cultural role to modern Turkey that New York City does for the United States.

Much of today was similar to our first full day in Istanbul last semester, with some minor variations.  Enjoy this highlights video; even with this hotel's reasonable internet, it took way too long to upload.  Video clips and perhaps some pictures for subsequent days will need to wait till I get home to Jerusalem, though I will always try to give a written summary and post at least a few pictures each day (this mostly for parents of students and a few of our more dedicated blog lurkers).

We stated by walking from our hotel in the Beyazıt neighborhood down to the historic center in Sultanahmet.  We were in a much better location for the sites we wanted to see than we were last semester.  Along the way, we walked around Istanbul University and saw several interesting street scenes until we arrived at our first major destination.

The major historic districts of old Istanbul are named for the important mosques that dominate them.  In what had been the center of the Byzantine capital the Ottoman Sultan Ahmet built a magnificent mosque named after himself though commonly called "The Blue Mosque."  Before visiting that mosque itself, we walked in the large, open plaza that preserves the basic footprint of the old Roman hippodrome or race track.  The tiered seating and the track are long gone, but some of the monuments, such as columns and an obelisk, which once adorned it remain.


We then went into the beautiful Blue Mosque, which is a prime example of how Turkish architecture adopted, adapted, and in many ways perfected the style of Byzantine church architecture best exemplified by Hagia Sophia (which we will see on the last day of our trip). 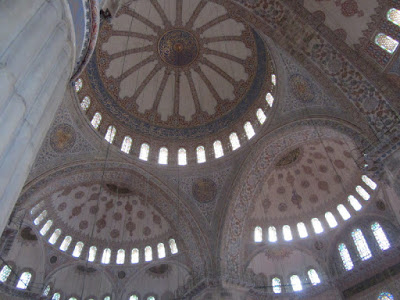 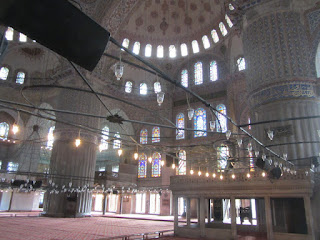 We then visited the Topkapı Palace, once the home of the sultans.  There we went through the successive courtyards, viewed the imperial treasures and important Islamic relics, and walked through many of the halls, though we did not go through the Harem this time. 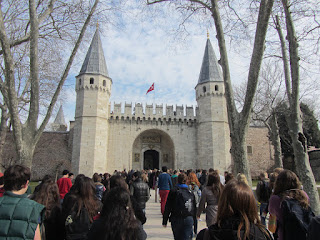 The Basilica Cistern was built by the emperor Justinian in the early 500's.  It was probably called the "basilica" because it was built under an important public square and building, the Stoa Basilica, though its use of row after row of columns and arches makes the subterranean area look much like a great church.


After lunch we visited the Grand Bazaar, after which we took a cruise up the Bosphorus, the important sea lane connecting the Black Sea with the Sea of Marmara and then the Aegean and Mediterraneans Seas beyond.  Last semester we cruised to within sight of the mouth of the Black Sea, had dinner, and bused back.  This time we went half way up and boated back to Istanbul and ate in the city.  This was just as well because IT WAS COLD! 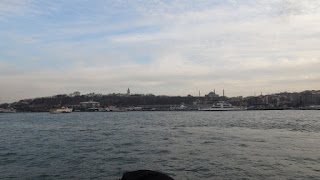 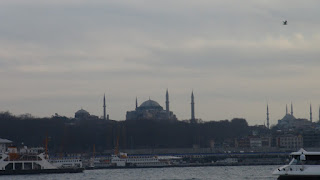