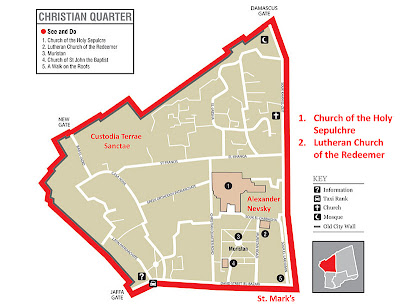 Most of our field trip on 3/15/21 was spent in the Christian Quarter, though one of the churches we visited is technically in the Armenian Quarter.  From A.D. 135 to 325, after all Jews were expelled from Judea, Jerusalem was the Roman city of Aelia Capitolina.  When Constantine made Christianity a legal, and in fact the favored, religion, Christians were able to start to build freely.  From A.D. 325 to 638, when the Muslims took the city, Jerusalem was a Christian city, the center of the Byzantine Holy Land and the focus of pilgrimage for Christians everywhere. 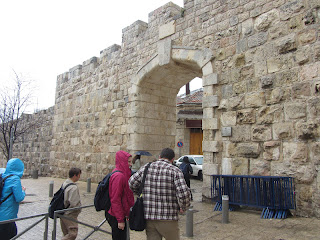 Here is the day's highlights video:


We began our field trip in the northwest corner of the Old City, near New Gate.  Here the Roman Catholic Church in the past century or two has established a number of institutions, such as a high school and a Franciscan complex called the Custodia Terrae Sanctae.  The "Custody of the Holy Land" traces its roots back to the visit of St. Francis of Assisi to the Holy Land in 1217.  Later the pope gave the order of friars he founded the responsibility to care for those churches and shrines in the Holy Land that were in the control of the Roman Catholic Church.  The headquarters of the Custody is in this complex in the Christian Quarter, where the Franciscans have a beautiful Renaissance style chapel, as well as a monastery and a tannery, where all the habits used in the Middle East are made (think of it was a massive Beehive Clothing for Catholics!).

In this tannery is a sewing shop, in part of the complex that used to serve as a hostel for Christian pilgrims.  Many of the pilgrims carved their names in the doors and on the walls.  In 1841-42, Orson Hyde was in Jerusalem and may well have stayed at the hostel.  On an old wooden door is carved a name that looks much like "Hyde." 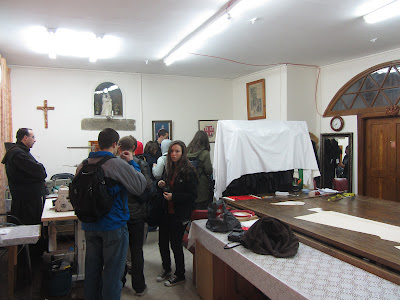 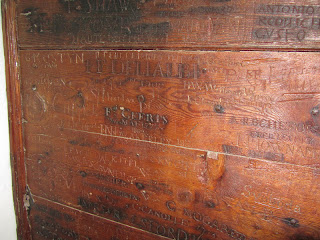 We then went into the beautiful Renaissance-style St. Saviour church, where Father Molinas gave us the history of the church and treated us to a brief organ performance.  We then sang "All Creatures of Our God and King," in honor of St. Francis, the founder of the order that runs the Custodia Terrae Sanctae. 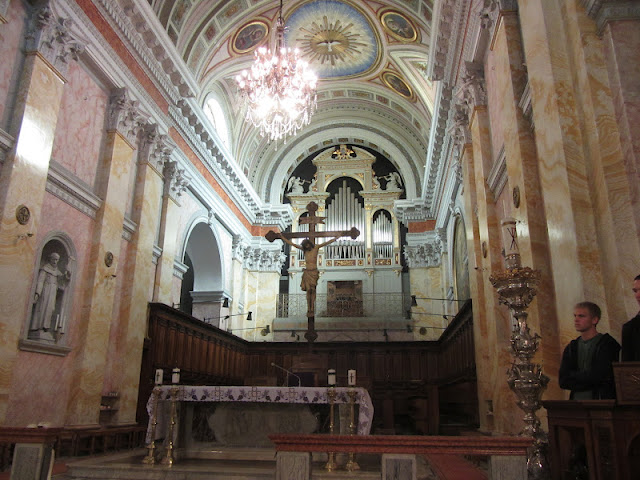 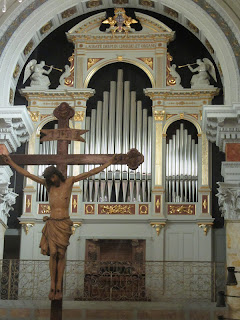 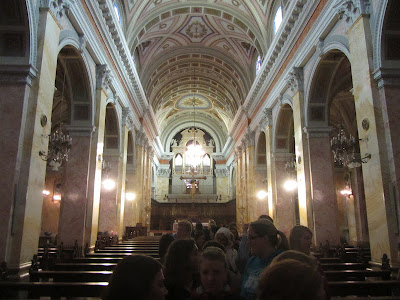 We then crossed into the Armenian Quarter, where we came to the Syrian Orthodox Church of St. Mark, which this denomination claims is built on the site of the Upper Room where the Last Supper was held (the Crusaders located it elsewhere, in the Coenecle on Mt. Zion).  Since this was believed to have been held in the home of the mother of John Mark (see Acts 12), it would also be the "first" church, where the apostles met together and where the Holy Spirit came down upon them at Pentecost.  Our hostess was a delightful woman named Sister Justina, who spoke with much faith about her belief in Christ, about the importance of this place, and of miracles that she herself has seen and experienced.

Down in the lower chamber that predates the church itself, we sang "In Humility, Our Savior" in honor of the Last Supper" and "Thy Spirit, Lord, Has Stirred Our Souls" in recollection of Pentecost. 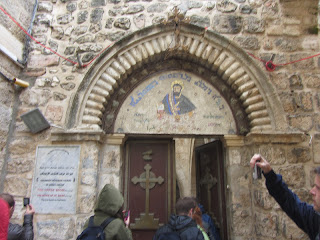 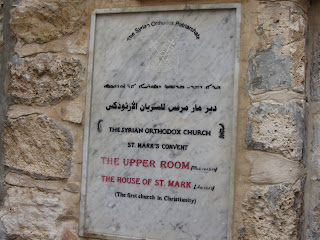 The original church commemorating both the crucifixion and the burial and subsequent resurrection was built by Constantine after his mother, Helena, came to the Holy Land on a pilgrimage to A.D. 326-328.  The site she was led to by local Christians had been held to be the site of the crucifixion and burial from a very early time, probably even before the emperor Hadrian rebuilt Jerusalem as a Roman city in A.D. 135.  In the Herodian Period, it lay outside of the city walls.  In fact, remnants of the Herodian Gate can be found in the basement of the Church of Alexander Nevsky.  When Hadrian rebuilt the city, he built a temple to Aphrodite on top of Christian sacred site, and one of the arches in the triple gateway that opened into the sacred precinct also survives in the basement of the Russian church. 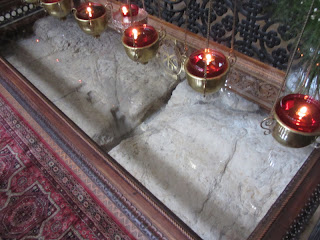 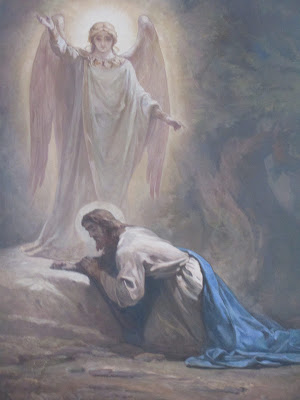 The original church built by Constantine was originally a complex, which began with a gateway and courtyard followed by a large basilica called the Anastasis, or "Resurrection."

Another open court behind the basilica was called "The Garden," and recalled the original garden surrounding the Lord's tomb.  There was then a circular domed shrine called the Martyrium or witness.  This church was destroyed by the Persians in 614.  It had barely been rebuilt when the Muslims conquered Jerusalem in 638.  The Arabs initially allowed the Christians to worship freely, but in 1009 the mad Fatamid caliph Al-Hakim razed the church to the ground.
In 1048 the Byzantine emperor Constantine IX Monomachos paid to rebuild the church but could only afford to rebuild the rotunda over the tomb itself.  Later, when the Crusaders took Jerusalem, they expanded this building some, leading to the basic floor plan of the church today.


While the church has much to recommend it in terms of tradition, its history, and archaeology, some Protestants and many Latter-day Saints prefer the site of the Garden Tomb outside the current Damascus Gate.  We took some of our students to that site soon after they arrived in September, and we will take them there again after our final "Last Week" walk, and when I blog about that I will write about the Garden Tombs relative strengths and weaknesses.  But what we tried to stress to the students during this visit to the Holy Sepulchre was that the faith of two millennia of Christians as made this place sacred. 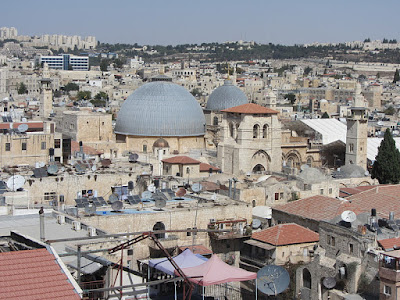 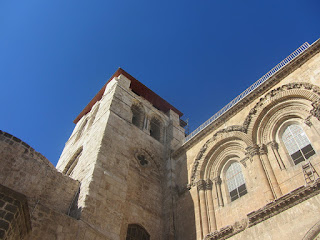 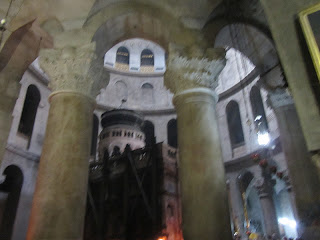 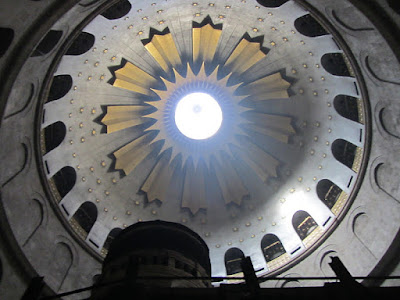 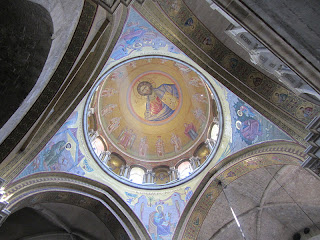 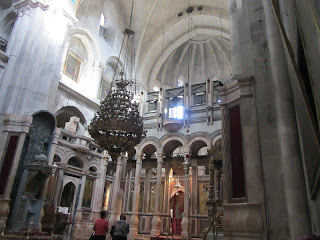 The last site we visited was the chapel off of the cloister next to the Lutheran Church of the Redeemer.  The Redeemer church was built by the Germans in the late nineteen century on the site of the old St. Mary of the Latins, a crusader church built on the grounds of the Knights of St. John of the Hospitalers.  Off of the cloister itself is a refrectory or dining hall, which is the current chapel of the English-speaking Lutheran congregation.  There we sang "A Mighty Fortress Is Our God" and then, out of the red Lutheran hymnal, "Come Thou Fount" and "Amazing Grace." 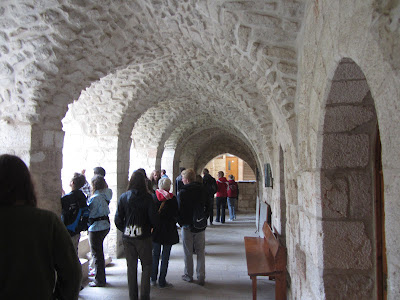 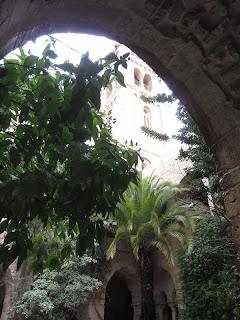 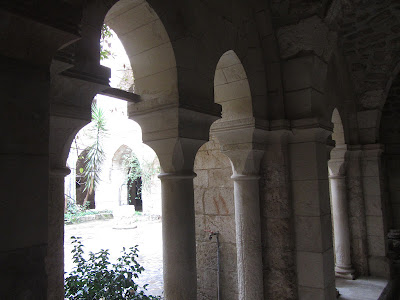