As usual, today's activities can be compared usefully with the report of last semester's trip, where I have given a bit more background and history for each of the sites.  Because of time and internet constraints, in this entry I will post as many pictures as I can of this semester's students with perhaps a bit of updated commentary.


Bet She'an
Located at the strategic juncture of the Jordan River and Jezreel Valleys, this site has been important since the Bronze Age, being occupied by empires from the Egyptian to the British. In the Old Testament period, it was known as Bet She'an, with remains found in the tell that dominates the site.

In the Hellenistic Period, the Ptolemies operating from Egypt built a Greek city under the tell and named it Scythopolis.  The Seleucids from Syria later renamed it Nysa, but after a brief period under the Jewish Hasmoneans, it resumed the name Scythopolis.  This is the name it is known by in the New Testament, where it is the leading city of Decapolis.


As a Greek, later "Roman," city, it is reminiscent of great cities of the period that we have seen such as Jerash in Jordan and Ephesus in Turkey.  Because of its position, it is very likely that Joseph and Mary passed this way as they traveled to Bethlehem, and Jesus and the disciples may likewise have passed through or by it in their travels.


Most of the students, much like me, were up way to late last night getting ready for our 11-day out-of-center rotation.  That together with a long bus ride up to Bet She'an resulted in a rather sleepy group as I began to take them through the site.  We had run into an LDS tour group at the entrance, so after I told my students about the theater at Bet She'an, I had them sing "Redeemer of Israel," thinking that might catch the attention of our co-religionists.  Well, none of them were within hearing distance of our performance, which was just as well, because it was sad, tired little rendition.  So since we were alone in the theater, I tried to wake my students up by having them all do the "flash mob" routine that we had come up with in Turkey.  If course as chance would have it, the LDS group came in just at that moment to see us in all our silly glory.  Oh well! 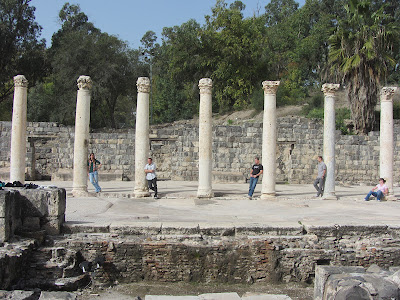 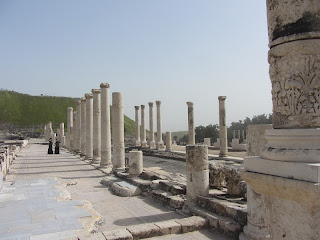 Nazareth
Once again, see last semester's blog entry for a longer discussion of the biblical history of Nazareth and the background of the churches that are pictured below.  One slightly different thing that I did this time was stop and do a lot of the students' orientation to Nazareth below the basilica complex.  After talking about the modern history of Nazareth---how it is now the largest Arab city in Israel because its citizens escaped expulsion in 1948 but how the previous Christian majority was soon swamped by Muslim refugees (much as was the case in Bethlehem)---I pointed out the Muslim prayer area right below the Basilica of the Annunciation.  We talked how the plans for a major mosque right there, rivaling almost the church, were altered with this compromise.  But the signs from the Qur'an tell quite a story of the continuing competition, if not tension, between Christians and Muslims. 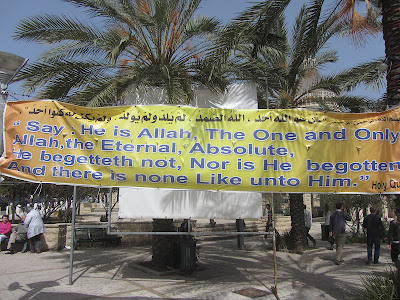 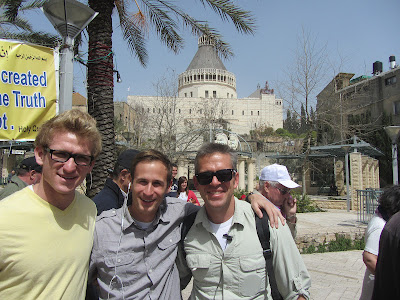 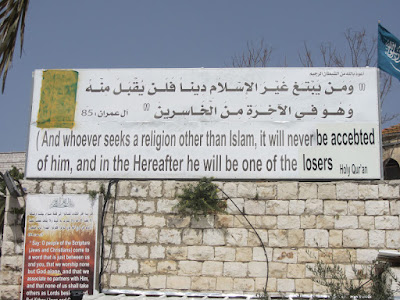 We had a .lovely time in the churches honoring Mary and Joseph.  Joined by a Franciscan convent, they are part of a complex that is beautiful, clean, and well-gardened.  Because of that and the peaceful spirit present, a few of the students called it "The Catholic Temple Square." 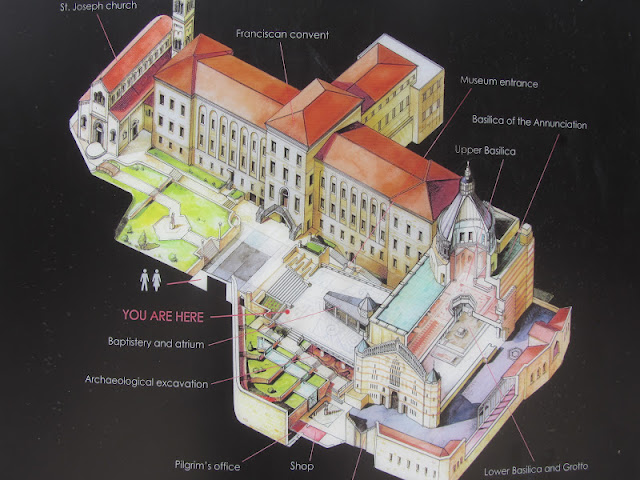 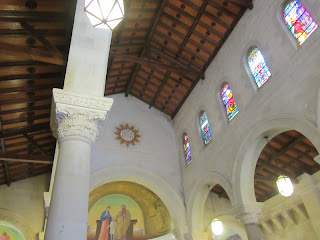 Before we left Nazareth, we made our way through the market to the so-called Synagogue Church.  Now operated by the Greek Catholics, this simple church is on the site of an early Jewish Christian place of worship that, by tradition, is located on the site of the very synagogue where Jesus taught his townsmen and women.  Here we had a devotional in which Steve Harper read from Isaiah 61, I read from Luke 4, and Jared Ludlow bore testimony.  We then sang several hymns, ending with "Jesus of Nazareth, which seemed quite appropriate. 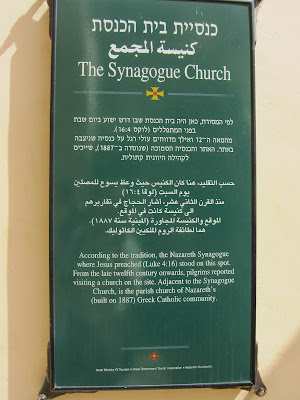 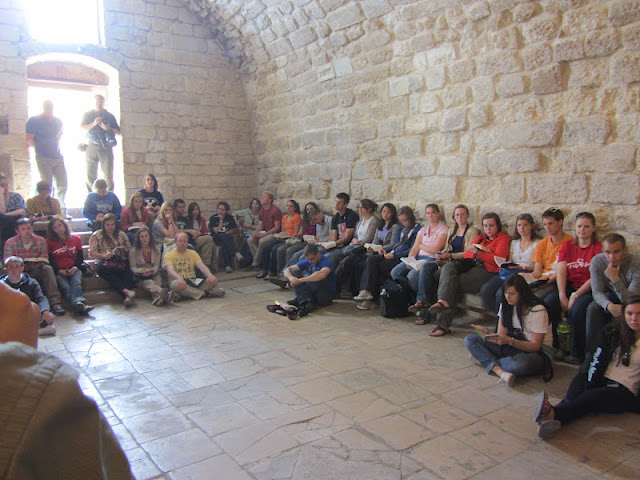 Our last stop of the day was at Mount Arbel.  Gently rising on one side, the mount drops precipitously on the other, creating stunning cliffs that were also afforded military strongholds at different points in history.   From the top of Arbel one usually has stunning views of the Sea of Galilee and geographic features in every direction.  Today, however, a thick haze kept us from seeing much of anything.


Still, it was an impressive natural site, and the green fields awash with yellow mustard blossoms were beautiful. 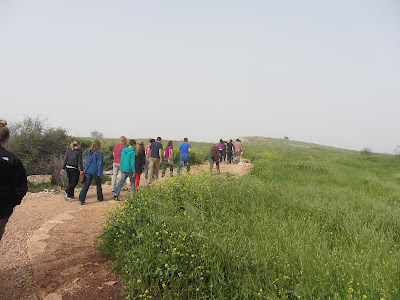 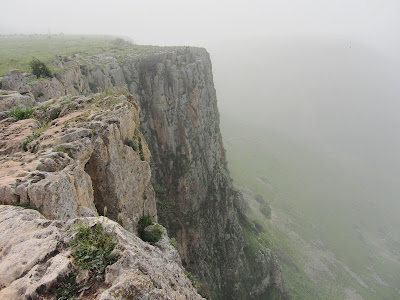 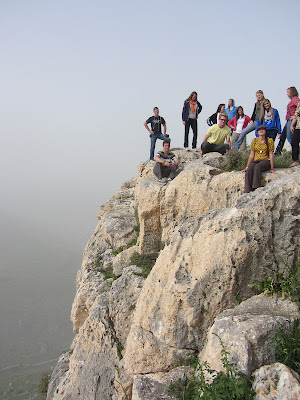 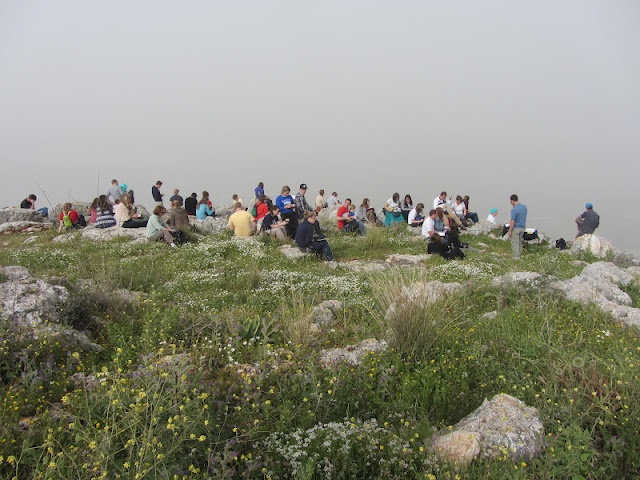