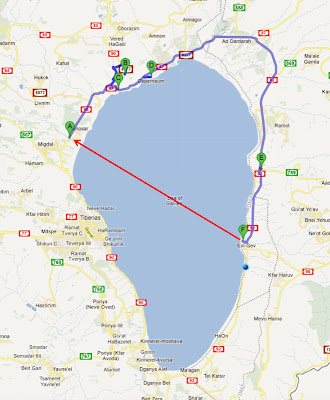 [Sorry that this entry is late posting.  With all the students trying to use the limited internet here at `En Gev, it has been difficult to get everything uploaded.  Future entries may need to be shorter as a result]

Today was a good day, and I think that the students had a great time . . . though I am, at almost-47, worn out by it all more than I think I would have been, say, earlier in middle age!  Things were a bit more stressful today because a few reservations had fallen through and I needed to make adjustments on the spot.

Also, I was "flying solo" all day.  Usually Jared Ludlow or Kent Jackson alternate between me and Steve, but today I was all alone, as I was much of the day yesterday.  Guess that means I am "experienced" now and supposedly up to this!  We had one of our great Jerusalem Center couples with us, however: Robert and Elizabeth Schafer.  Both retired academics, they are good company and wonderful people.

Of all the places in the world he created, Jesus chose to spend most of his life in Galilee.  And being in Galilee in the spring, I can certainly see why.  The hills are covered with green grass, interspersed liberally with yellow mustard flowers, white wild flowers, and other rich plant life right now.  Galilee is beautiful even in the dry season, but now it is particularly lovely.  We still had haze hovering over the sea and valleys surrounding it, but the weather was otherwise warm and as pleasant as one could want.

Please see last semester's post for the background of the different places we visited today.  I am simply going to write a header for each one, followed by a few sentences.  That is not my wont, so we'll see how successful I am at following this plan!

Galilee Boat Ride
One of the real treats of this field trip each semester is taking the students on a boat ride across the Sea of Galilee.  The crew always plays gospel music, allowing us to have fun AND praise the Lord in a different way than our LDS hymnal/Mormon Tabernacle Choir way (which are both great ways, I can assure you!).  Midway across the lake, the crew stops the boat and we have a devotional.  I taught from Mark and Matthew about Jesus stilling the storm and walking on the sea, including the Matthean variant of Peter coming out on the water to meet him and then needing to be saved by him.  We sang "Master the Tempest Is Raging," of course, followed by "Be Still My Soul."  After that we had quiet time as the boat cruised to the opposite shore.  I am always pleased and impressed by how seriously our students take "quiet time," using it to meditate, pray, and write their feelings.


[Does that paragraph count as just a few sentences?] 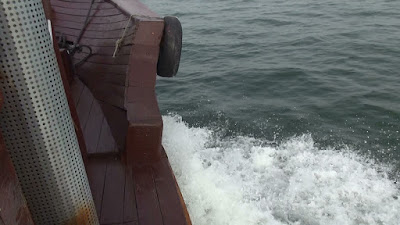 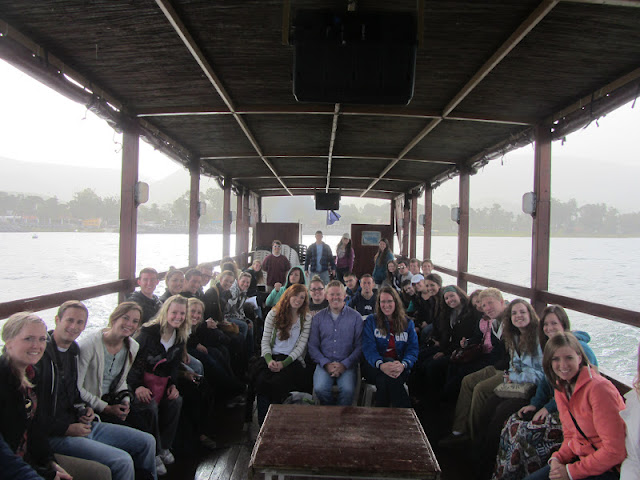 The Galilee Boat
While we rode a (relatively) modern boat across the Sea of Galilee, when we docked at Nof Ginosar, we got to see the only known and preserved first century boat.  This boat, which could have held 12-15 people was probably the kind of boat that Andrew, Peter, James and John used.  Ginosar, by the way, is modern Hebrew for the Greek Genneseret, which in turn comes from the biblical Hebrew Kinnereth (meaning "harp," this was the ancient name for the Sea of Galilee).

[Perfect, that was THREE and only three sentences.  See http://huntsmansintheholyland.blogspot.com/2011/11/galilee-boat-ride-mount-of-beatitudes.html for more!] 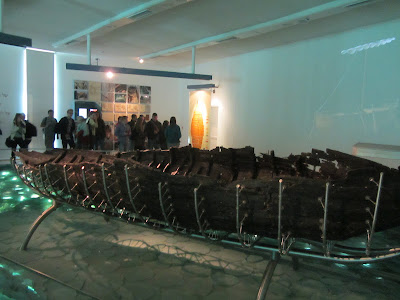 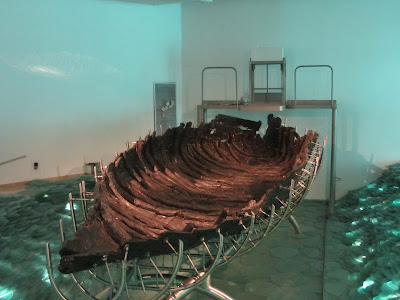 Built in 1938 on a high hill overlooking the Sea of Galilee, the octagonal church commemorating the Beatitudes is not necessarily located where Jesus delivered the Sermon on the Mount.  But is as likely a spot as any and is rather close to spots on the coast below that are associated with events from the Savior's ministry (the Feeding of the 5,000 at Tabgha) and his post-resurrection appearances to his disciples (at Peter's Primacy).

Though we did not have reserved spot for our meeting, Sister Mary Rose was able to give us a gathering area near the church between other meeting spots.  This made our devotional a bit more subdued; we read through much of the Sermon on the Mount together, softly sang "More Holiness Give Me," and one of our classmates (Lee) offered a prayer. 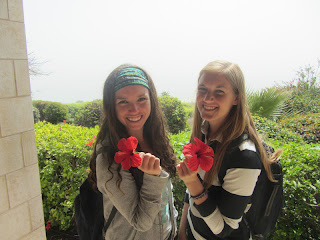 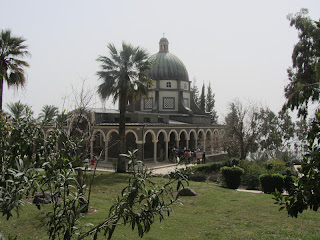 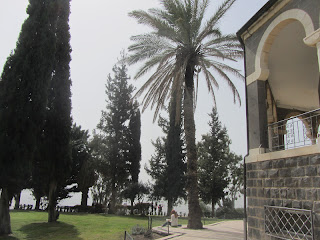 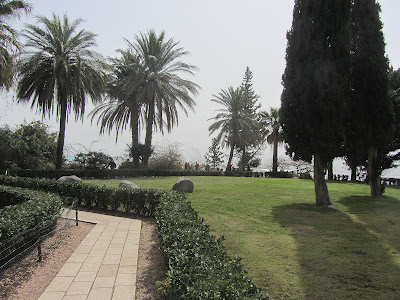 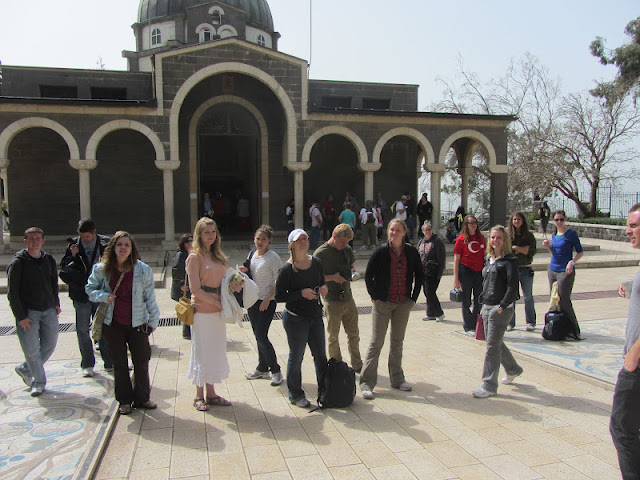 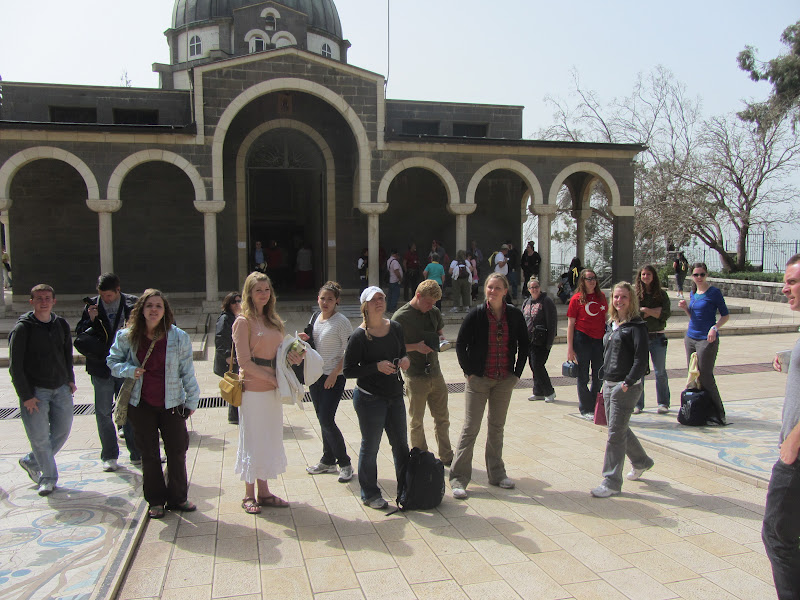 Taghba
At a point where seven springs came together as they flowed into the Dead Sea was a spot that early Christians associated with the miraculous Feeding of the 5,000 ("Taghba" is an Arabic corruption of the Greek Heptapegon for "seven springs").  In the early part of the last century, a Benedictine church was built on the site where it was discovered an early Christian church had been built to commemorate a large rock upon which, it was believed, the Savior put the loaves and the fishes.  We talked in a corner of the front court outside the church about the miraculous feeding and in particular about the Bread of Life Discourse in John 6, but the crowds did not allow us to sing. 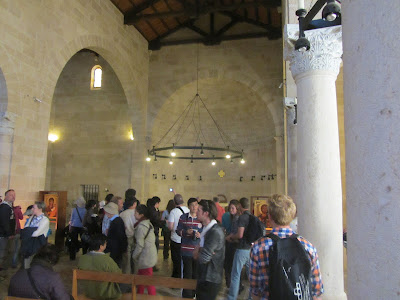 St. Peter's Primacy
Not too far from Taghba is spot that recalls the Risen Lord's commission to Peter to "feed his sheep."  Once again it is a church, this time a Franciscan one, built over another rock that early Christians associated with Jesus.  Here they believe he served a meal of bread and fish to a handful of disciples as described in John 21.
When we arrived, a large group of European Christians had filled the small church and were processing between it and an outdoor mass area.  They were all dressed in white robes, and I? had never seen anything quite like it.   I took the students down from the church and onto the beach itself, walking eastward a bit so that all we could see was the sea and the coast, nothing modern to remember "when" we were.  There we read John 21. 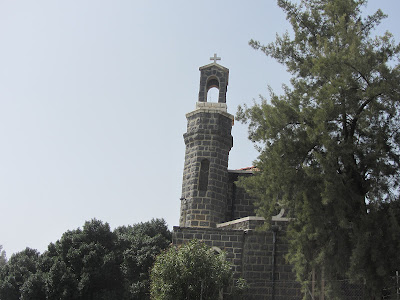 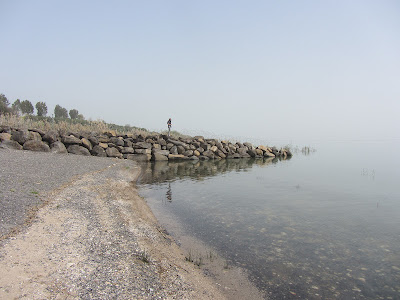 Sites are not all about religion.  Sometimes we also have some fun.  In the next two pictures Jon-Jon and Courtney show us that skipping rocks off of the water is all about form! 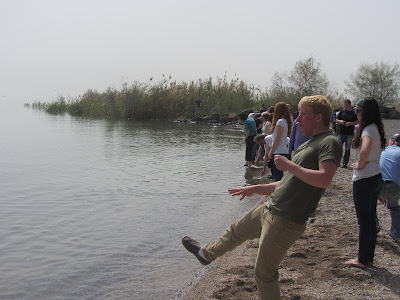 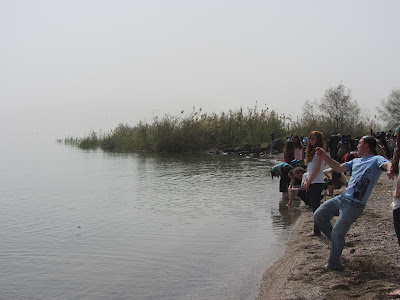 Capernaum
The town of Andrew and Peter, as well as James and John, Capernaum became Jesus' headquarters for much of his Galilean Ministry.  In the fourth and fifth centuries a "house church" commemorated where Peter lived.  It was later replaced by an octagonal Byzantine church, and recently the Franciscans have built a modern church over all the remains.
We started by the sea side, where we read about the call of the first disciples and sang "Come Follow Me."  We then walked through the other sites, which you can read more about . . . wait for it . . . in last semester's post! 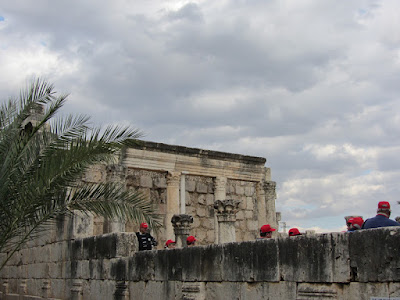 Kursi
On our way back to `En Gev, we stopped at Kursi, the traditional site of the casting out of the legion of devils. Known in some biblical manuscripts as "Gergesa," this is a scribal guess, since earlier texts read Gadara or Gerasa (modern Jerash), both cities of the Decapolis across the Jordan that are too far away (Mark would have had the pigs run a half marathon!). There are remains of a large Byzantine monastery here that commemorated the event, but we mostly just used the site to talk not only about Jesus' power over devils but also is ability to free us from other things that enslave us today, such as addictions or habits.  Some of the students climbed up the hill to reenact the swine plummeting down towards the sea, what we have come to call "pig races!"
Posted by Eric D. Huntsman at 11:42 AM