We checked out of our hotel after breakfast and boarded the bus forour major site of the day, Jerash.  In Israel and Palestine we will have three buses, one with Tyler Griffin, one with me, and one with Scott and Maureen Proctor. Some from each group elected to join us on the Jordan pre-tour option, where we spend three days here before meeting the rest of our groups in Tel Aviv.

In Jordan and Israel, as in Turkey, Greece, and Italy, we are required to have licensed, local guides.  On this trip ours is a Jordanian named Roberto Massis, whom I worked with on a previous tour in 2017.
Jordan is often overlooked by pilgrims to the Holy Land, but we like to always tell our groups that it WAS part of the ancient Holy Land. Two and a half of the tribes of Israel settled in what is now Jordan, and even before that it was the site of the biblical kingdoms of Ammon, Moab, and Edom, who were all cousins of the Israelites. In the New Testament period, there were many Hellenized, or Greek-speaking, cities, and it was the site of the important Nabataean Kingdom headquartered in Petra (see tomorrow's post). 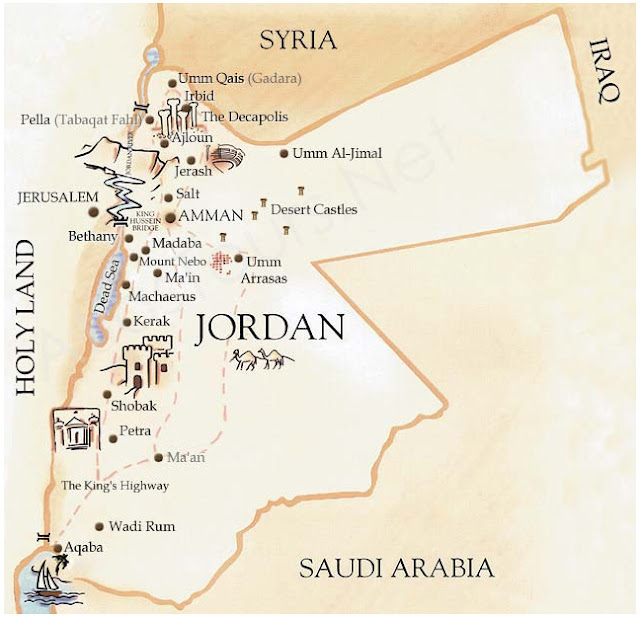 We start each day with a bus devotional, where a member of our group shares a scripture, shares a few thoughts about it, we sing, and then that volunteer offers our travel prayer. Today Doug Bodily spoke seeking Christ, and we sang "Teach Me to Walk in the Light."

Brief Stop at the Jabbok River 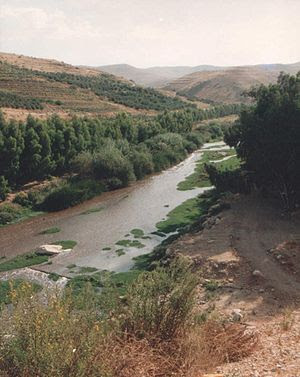 On our way we stopped at a pull-off or rest stop on the banks of the Zarqa River, which is the biblical Jabbok River. This is in a hilly, relatively rich agricultural area known anciently as Gilead, and the Jabbok formed the border between the tribe of Gad and half of the tribe of Manasseh.

This is where Jacob wrestled with the angel on his way back to Canaan after having spent years working for his wives in Laban’s service and fathering 11 or his 12 sons (and presumably his known daughter Dinah).  I read the account from Genesis 32:22–30 and discussed the sacred nature of his receiving the new name Yisrael and seeing the face of God and how that compared to the purpose of our experience in the temple.  Given his concern for his family and the presumed nature of the blessings he sought, I extended it to our own making and keeping of sacred covenants that allow us to be with our families forever.  This led us to sing, naturally, “Families Can Be Together Forever.”  It was nice, I thought. 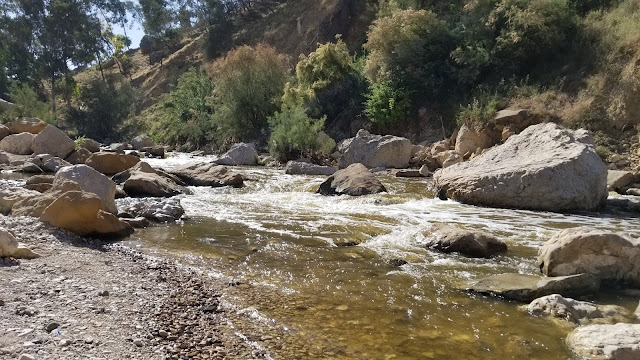 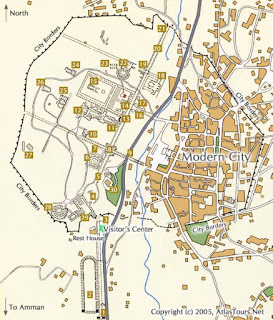 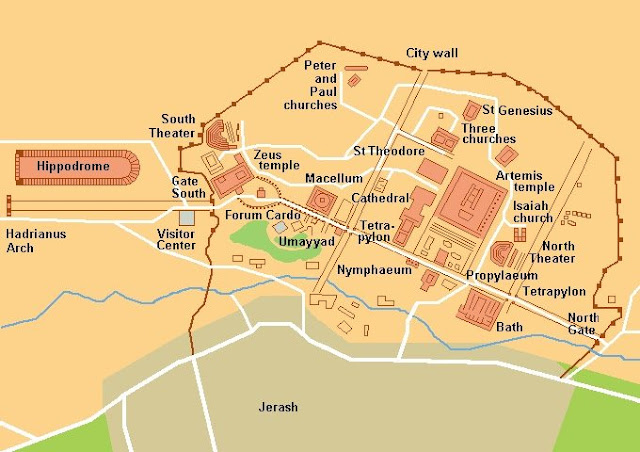 After one walks through the commemorative gate and before reaching the main southern gate, which led into the city proper, one first comes upon the hippodrome, or chariot racing track that held up to 15,000 people. 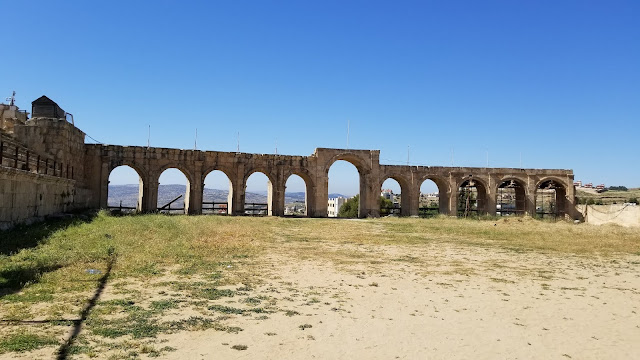 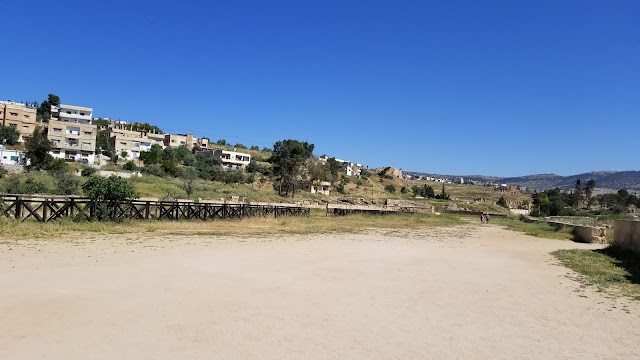 Immediately after entering the southern gate is a large oval plaza from which the main streets of Gerasa radiated. 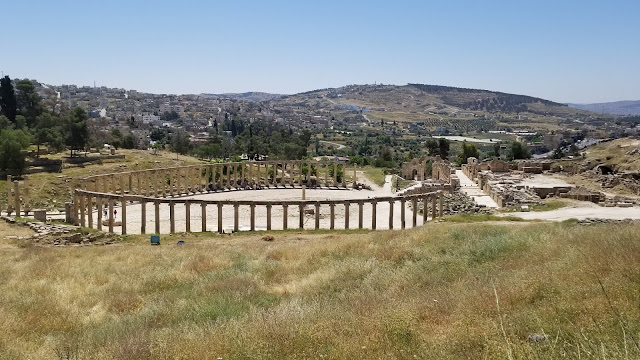 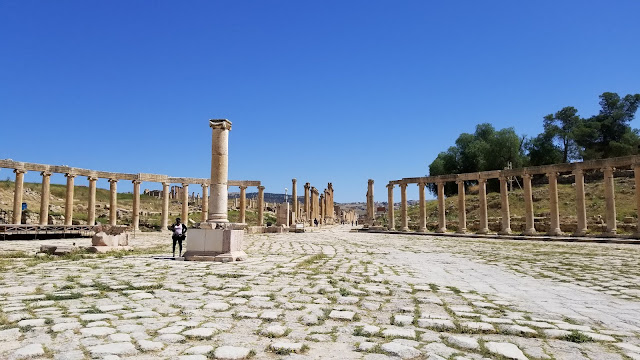 Above the plaza are the remains of a monumental temple to Zeus and a well-preserved theater, where we saw retired Jordanian military officers play the bagpipes (a holdover from the British period) and sang "Come, Come Ye Saints" to test the acoustics. 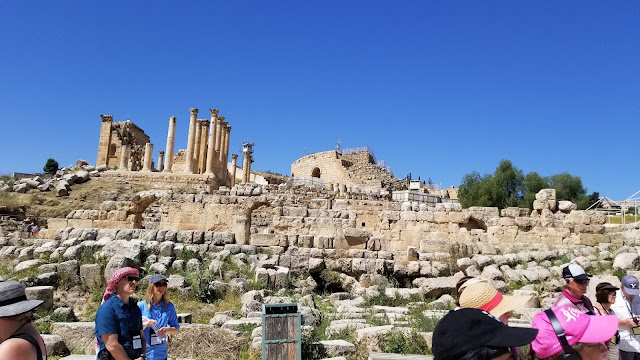 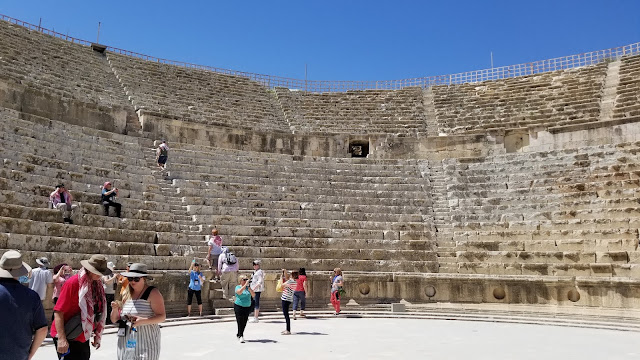 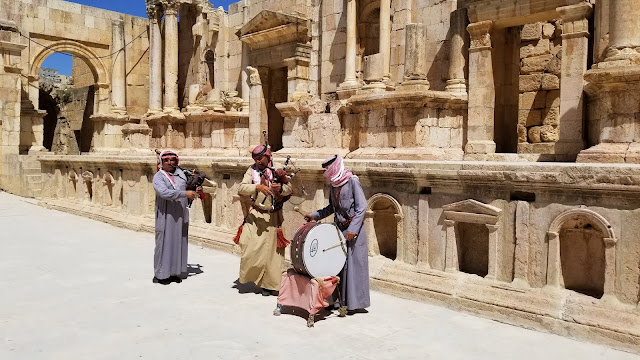 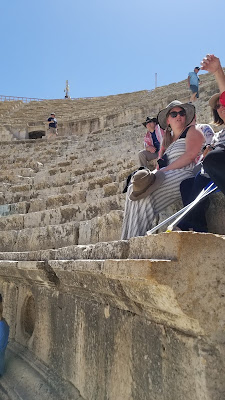 We then hiked around some of the remains of Gerasa, checking later Byzantine churches and the ancient temple of Artemis. 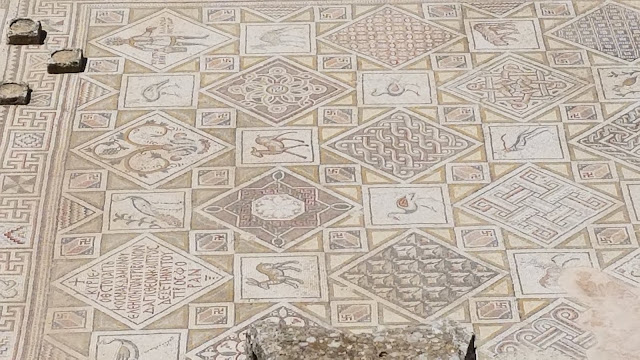 We ended our walking tour of ancient Gerasa on the colonnaded Cardo, or Main Street. 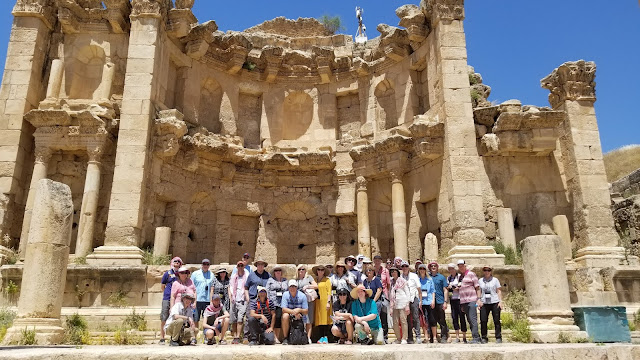 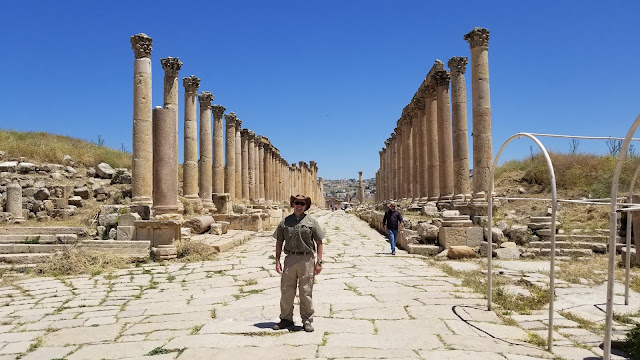 We had a late lunch at the Artemis Restaurant, Artemis having been the patron goddess of ancient Gerasa.  It was a buffet consisted of lots of good food! Forgot to take any pictures of the meal, though . . .

We had a lot of bus time after that, because we drove back down to Amman and then a long way south along the desert highway towards Petra.  I am used to taking more of the road following the ancient King’s Highway where there is time to talk about more history and biblical connections (such as stopping at the Herodian fortress-palace of Machaerus, where Antipas may have executed John the Baptist).  But I am finding that because this commercial tour is necessarily quicker than what we did with our JC students (and, because as we will find tomorrow, we have other interesting sites and activities, such as Wadi Rum), we cannot do it all.

Anyway, the King's Highway is certainly worth reading about.

We did follow some of its route, however, seeing the remains of the Crusader Castle of Montreal, now known as Shobak Castle. 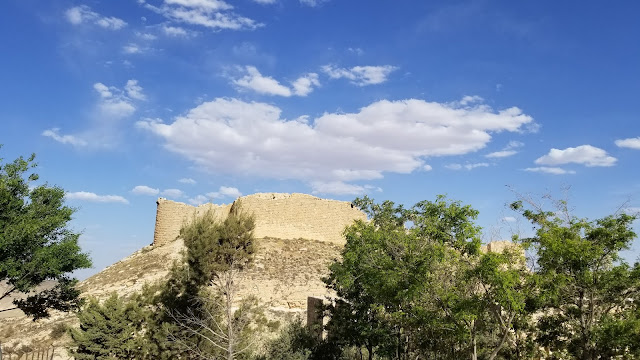 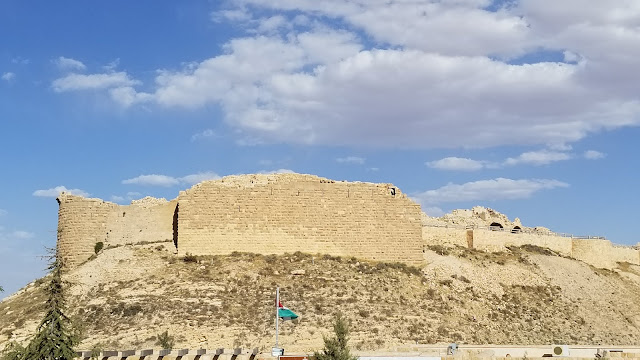 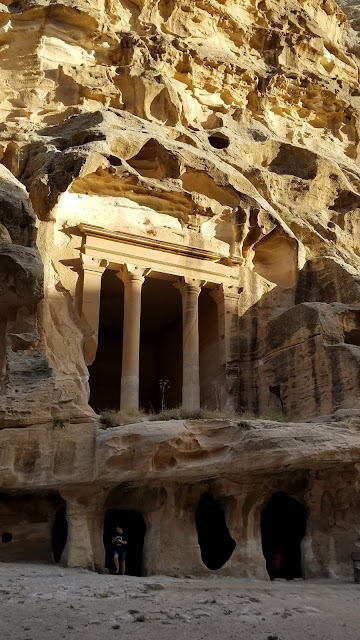 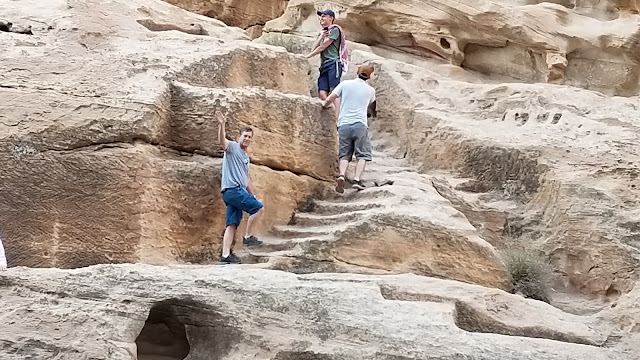 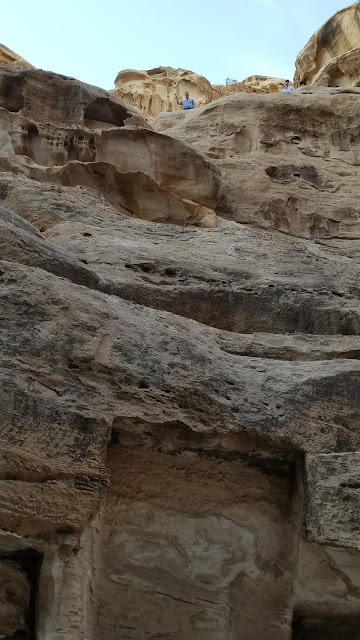 We then checked into our hotel in the Jordanian town of Wadi Musa (which means "Valley of Moses") and will be the place from which we stage our visit to Petra tomorrow. The hotel is called Beit Zaman, which means something in Arabic like “the house of once upon a time.”  It is a converted Bedouin village which is now a luxurious hotel, one of the nicest that we stay at on this trip. 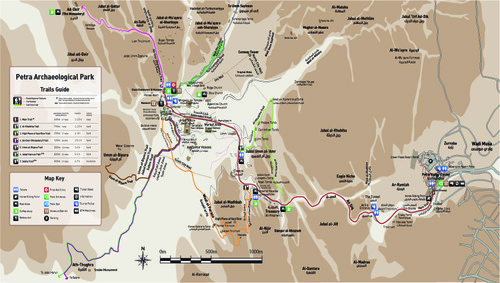