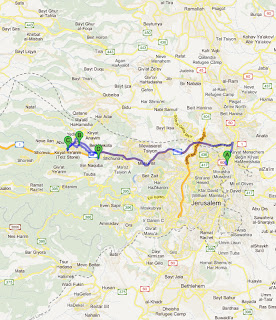 Because we did not have a student field trip to plan for today, the faculty (with Nancy Jackson and Jen Harper) went on an outing to three nearby sites, two of which, Abu Ghosh and En Hemed, had Crusader-era connections.  The third, Qiryat Ye'arim, is primarily important as an Old Testament site, though it had a Byzantine church built on it and currently boasts a lovely little church run by the order of St. Joseph of the Apparition.

Abu Ghosh is an Israeli-Arab town about 6 miles west of Jerusalem.  Throughout the period of the British Mandate and even during the dark years of the 1948 War, the townspeople maintained good relations with the Zionists and, since, with the Israeli government.  This contrasts with most of the Arab villages along the Bab el-Wad, the steep valley (often a narrow gorge) that leads from the coast up to Jerusalem, many of whom actively fought the Israelis and worked to block supplies from reaching the Jewish section of Jerusalem. 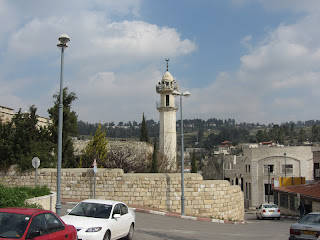 Anyway, while it later took its name from the Arab clan that ruled it in the Ottoman period, Abu Ghosh was the site that the Crusaders earlier thought was biblical Emmaus, the place where the Risen Lord revealed himself to two disciples after walking with them 60 stadia (KJV, "furlongs"; see Luke 24:13-35).  The Byzantines, on the other hand, had earlier associated the site of Neapolis (modern Latrun, see our earlier blog post) with Emmaus and followed texts that read "160 stadia" to give them the farther distance.

Abu Gosh features one of the best preserved Crusader-era churches in the Holy Land, one that is still maintained and used by a French Benedictine order.  While the building itself is still quite intact, its once magnificent frescoes, clearly done by local Christian artists working in the Byzantine style, have largely flaked off.  Some of the surviving ones had the faces of all the angels and saints removed because of Muslim prohibitions on representative art.  But those that have survived are still quite impressive. 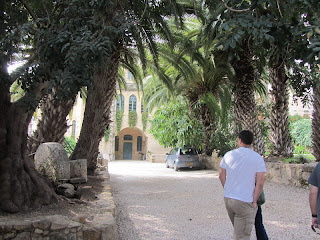 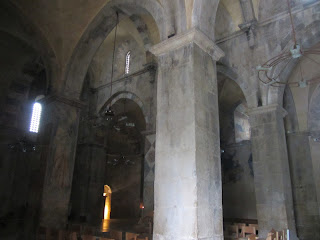 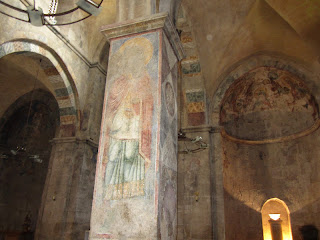 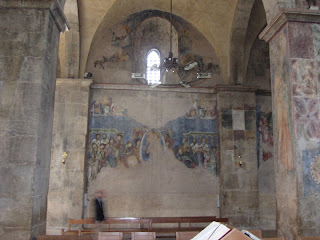 Surprisingly, however, none of the frescoes recount the story of the Road to Emmaus or the famous dinner there, where Jesus revealed his identity after breaking bread with the two disciples.  Nonetheless, sitting in the crypt, we had a sweet experience as Kent read the story from Luke 24, after which we sang hymn 157, "Thy Spirit, Lord, Has Stirred Our Souls." 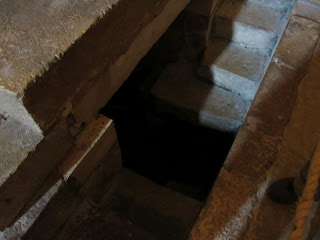 After that we drove to the height above and to the west of Abu Ghosh known as Qiryat Ye'arim.  This is where the Ark of the Covenant, after it was restored by the Philistines to Bet Shemesh, was brought by the Israelites and where it stayed for 20 years until David brought it to the Temple Mount in Jerusalem (see 1 Samuel 6:21-7:2; 2 Samuel 6). The Byzantines had built a church on the site, no doubt an ancient high place, to commemorate this, and in 1924 a French order called St. Joseph of the Apparition rebuilt the church as the Church of Notre Dame de l'Arche de l'Alliance (Our Lady of the Ark of the Covenant).  The "steeple" of the church is a fantastic sculpture of the Madonna and Child standing on the Ark of the Covenant, the idea being that they old container of God's covenants and the seat of his presence was replaced by Mary, the Mother of Christ. 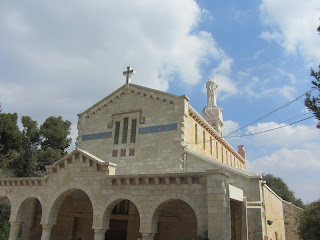 Our final stop was to En Hemed, an Israeli National Park built around a beautiful natural spring.  Here the Crusaders had also built either a farm complex (a manor, as it would have been called in feudal Europe) or perhaps a "retirement home for retired knights."  It was a great site where I would like to take the family. 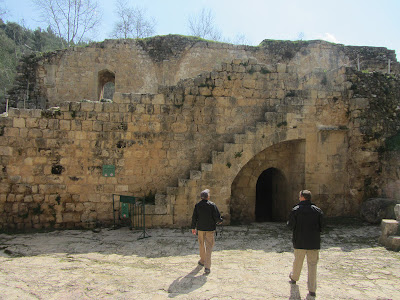 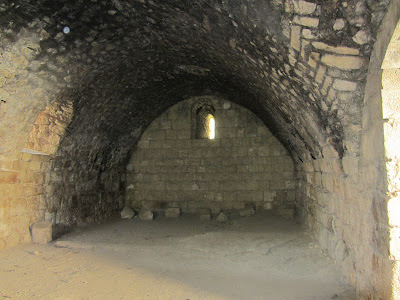 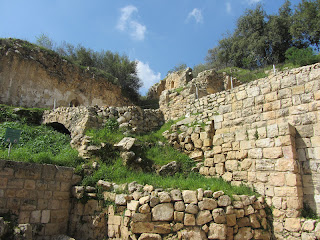 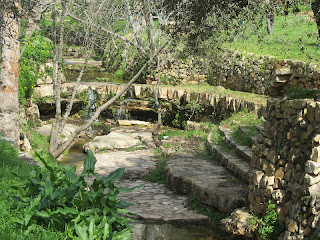 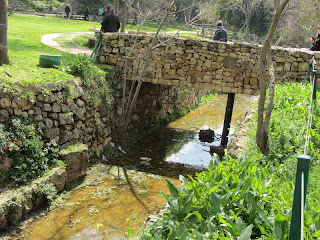 We then went back to Abu Ghosh for a late lunch in a Lebanese restaurant.  It was a great day with good colleagues.
Posted by Eric D. Huntsman at 8:49 AM 1 comment: 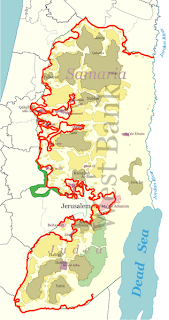 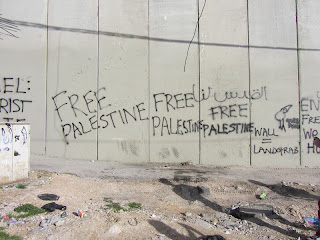 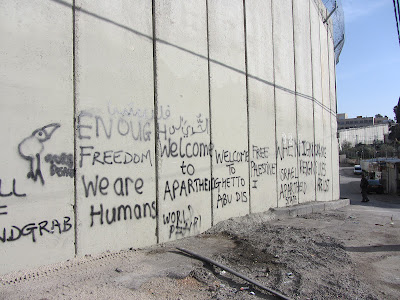 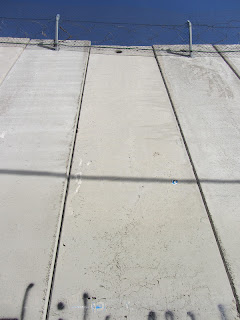 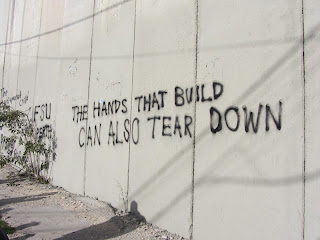 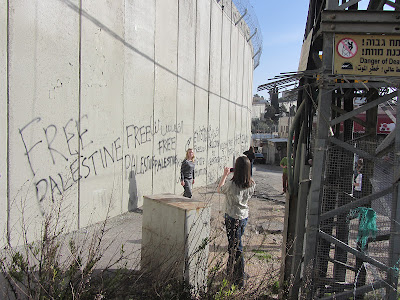 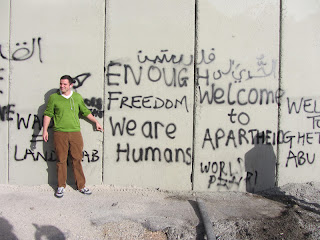 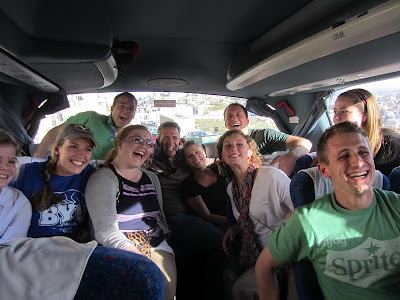 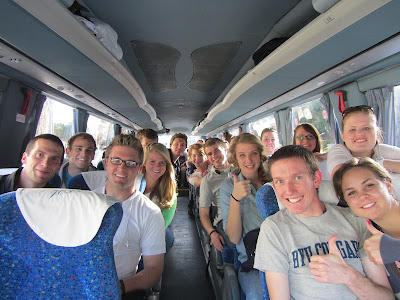 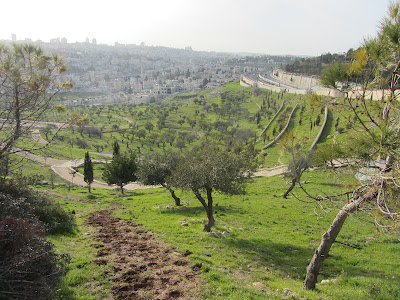 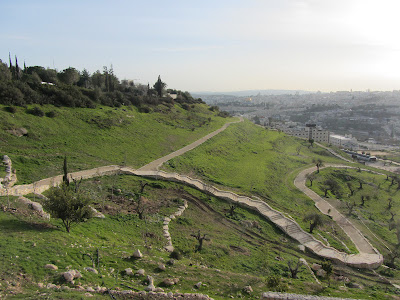 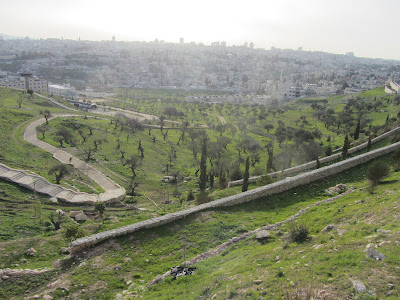