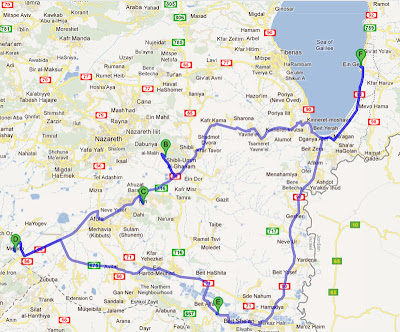 Today's field trip saw us cover a lot of ground.  We left `En Gev and drove first to Mt. Tabor, which is in Western Galilee near the broad Jezreel Valley.  After visiting the traditional site of the Transfiguration (as opposed to the more likely one north at Mt. Hermon), we went to Nain, where Jesus raised the widow's son.  We then visited Megiddo, an ancient Canaanite fortress and sanctuary that later became an important stronghold of Solomon and later Israelite kings.  It is also, (in)famously mentioned in Revelation16:16, giving rise to perceptions, and misperceptions of "Armageddon."  After such a heavy day, we needed a break, so we finished the afternoon swimming at a natural spring under Mt. Gilboa. 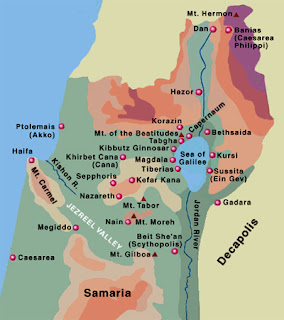 After looking over last semester's field trip to these sites, take a look at today's highlights video:

Mount Tabor
Since the Byzantine period, Mount Tabor, one of the highest hills in Galilee and also one that stands strickingly apart from any other, thus making it more impressive, has been identified with the mountain where Jesus took Peter, James, and John and was transfigured before them.  Earlier, in the Old Testament, it was the scene of Deborah and Barak's defeat of Sisera and the Canaanites in the book of Judges.

Buses can only make it part way up the hill, so we stopped, unloaded, and caught small taxi vans to take the winding road to the top.  As the highlight video above shows, it was a rather wild ride!  On the crest of the hill, the Franciscans rebuilt a Church of the Transfiguration on the site of earlier Byzantine and Crusader churches.


In addition to the main sanctuary in the church, there are side chapels dedicated to Moses and Elijah, the two other glorious beings unveiled when the three apostles had a vision of Christ in glory.  The Franciscan in charge today gave us permission to gather in the small Moses chapel, where we held a our own devotional.  There I reviewed the three Transfiguration accounts, noting the differences and unique contributions of the Marcan, Matthean, and Lucan accounts as well as reading later witnesses given by Peter and John in their writings.  We sang several hymns, including "Jehovah, Lord of Heaven and Earth," "Arise, O God, and Shine," and "More Holiness Give Me."  It was very nice. 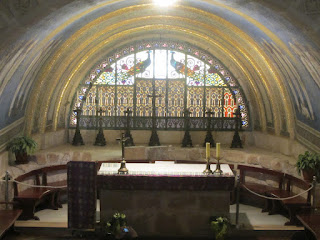 After giving the students time in the church, we went out into some of the ruins, where Jared Ludlow talked to us about LDS implications of the transfiguration and in particular about the appearance of Moses and Elijah in the Kirtland Temple.  I added to his readings from D&C 110 by going back to the beginning of that section to stress the glorious vision of Christ.  We then sang "The Spirit of God." 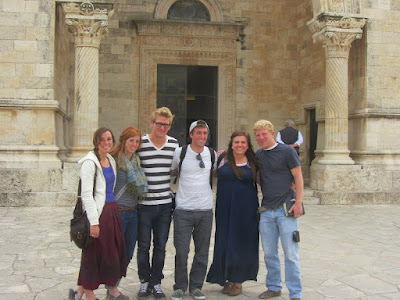 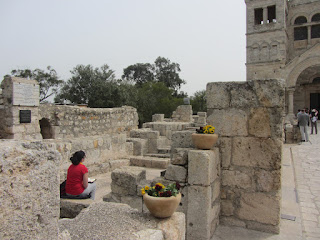 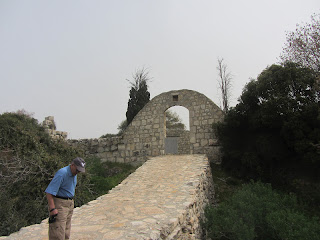 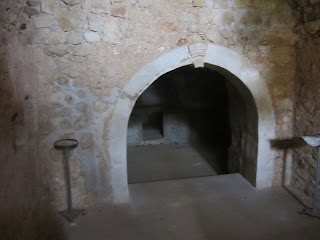 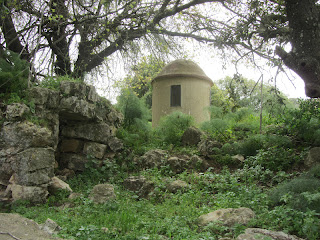 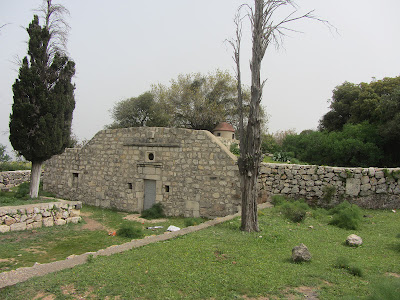 Nain
The small church that commemorated Jesus' raising of the widow's son here (Luke 7:11-17) was closed when we arrived, but we had a very nice devotional on the grounds.  Sitting on the rocks around the church, we discussed Jesus' power over death and the hope it gives us, especially in the face of the natural grief that we must go through when we lose a loved one.  We then sang "Oh What Songs of the Heart," "Each Life that Touches Ours For Good," and "I Need Thee Every Hour." 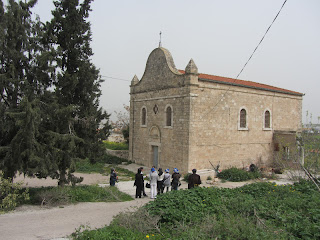 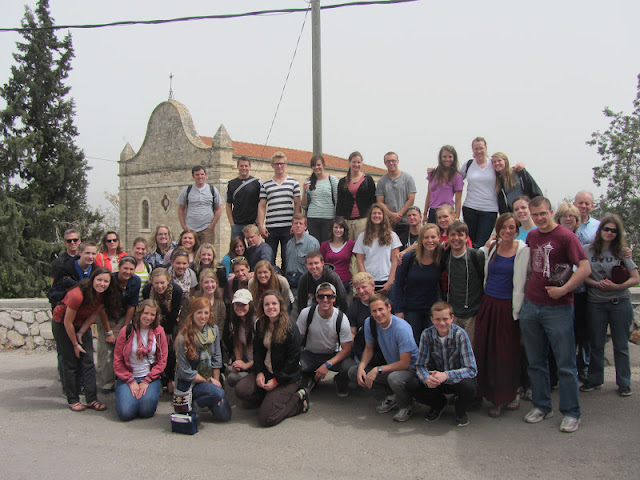 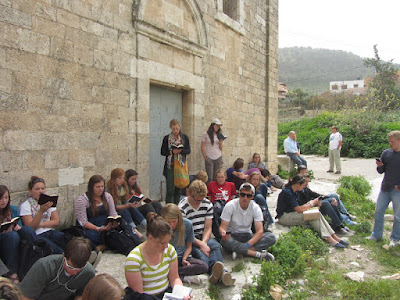 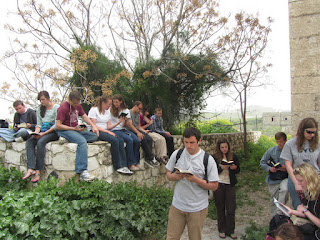 Tel Megiddo occupies a strategic position towards the head of the Jezreel Valley.  It was occupied from a very early period and served as a Canaanite sanctuary and stronghold.  Solomon made it one of his fortified cities, which served as base for his chariots, and later kings of Israel followed suit.  It was here that good king Josiah was killed, trying to stop Pharaoh Necho from advancing towards Mesopotamia.  Jared reviewed all of this as he led us through the museum at the bottom of the site and then walked us through the site.

At the top, as we looked over the Jezreel Valley (which was sadly shrouded in haze), I discussed a seeming reference appears in Revelation 16:16, where we read that God will gather all for judgment.  But despite the seeming reference to a great apocalyptic battle between armies for and against Israel there (Har Megiddo means "Mountain of Megiddo" and appears in Greek as Armageddon), the destructions which that chapter described come through natural disasters that God sends upon the earth.  So while it is popular to conflate this sole reference to "Armageddon" with other prophecies regarding the last days found, for instance, in Ezekiel and Daniel, perhaps we would best simply see it as reference to God's final judgments on the wicked, however they are inflicted.


Gan HaShlosha
Our final stop of the day was a break, swimming in the natural springs that flow out from under Mount Gilboa.  This has been developed into an Israeli National Park called Gan HaShlosha. 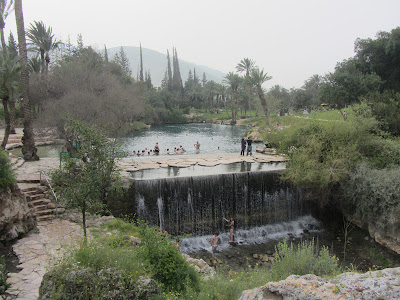 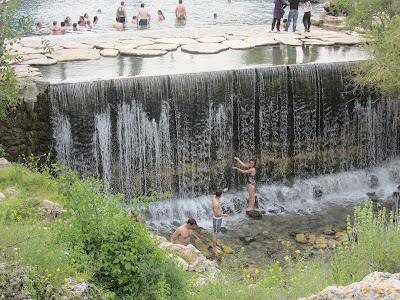 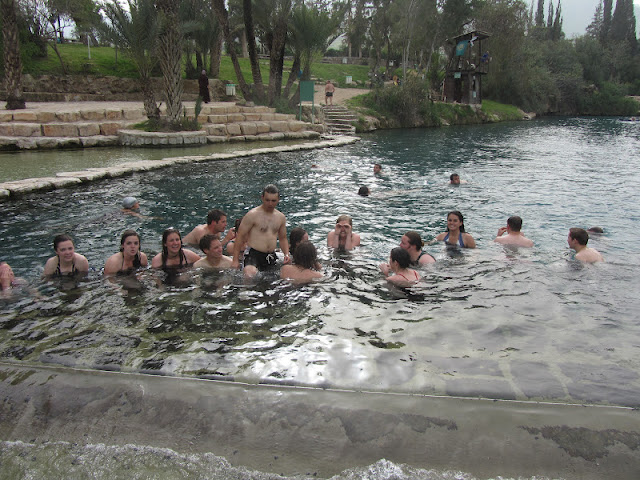