The first half of our eighth day in Galilee was spent in class.  During those  three hours we finished our discussion of Luke (up to the Passion Narrative), focusing on the Perean Ministry (much of it unique Lucan material as Jesus moved towards Jerusalem for his final week).

The students had the afternoon off, and during that time Elaine took the children to the beach. I went with Kent Jackson a quick outing to the north end of the lake, first to look at the site of Bethsaida and then to visit the lovely Orthodox compound next to Capernaum.


Bethsaida
With Capernaum and Chorazin, Bethsaida formed the so-called "evangelical triangle" where Jesus spent much of this Galilean ministry.  Jesus later rebuked these three towns, noting that nowhere else had he done more miracles and mighty works, yet they had not repented.  All three of these cities are now nothing but heaps of ruins.

The gospel of John tells us that Andrew, Peter, and Philip came from here. It is an advantageous site, near where the Jordan River enters the Sea of Galilee.  Settlements had existed here since the iron age, but in A.D. 30, Herod's son Philiip, who was tetrarch of the northeast, refounded it as a Greek city named Julia after the empress Livia (who was, incidentally, my dissertation topic). 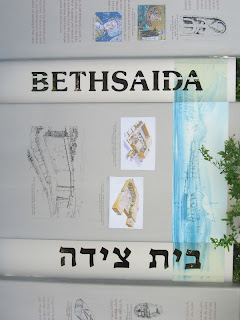 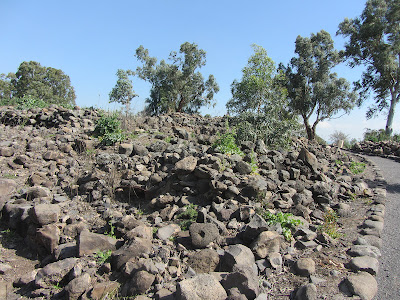 Just west and a little north of the archaeological site of Capernaum run by the Franciscans is the lovely little Monastery of the Holy Apostles.  The Orthodox Church obtained this property in the late nineteenth century, but this sliver of territory found itself in the "no man's land" in between Israel and Syria after 1948.  Following the 1967 War, the Orthodox regained access to their property, finished the beautiful church, expanded the monastery, and developed the grounds.

The site, as all the Orthodox sites in the Holy Land, is administered by "The Gaurdians of the Sepulchre" (literally "guards of the Tomb," phylakes taphou, and often rendered "The Brotherhood of the Holy Sepulchre").  This is the order that governs the Greek Orthodox Church in the Holy Land, electing the Orthodox Patriarch and caring for its churches (in the latter function being much like the Franciscan Custos Terrae Sanctae). 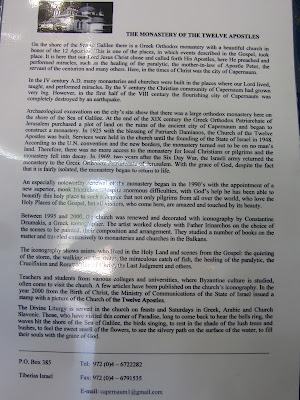 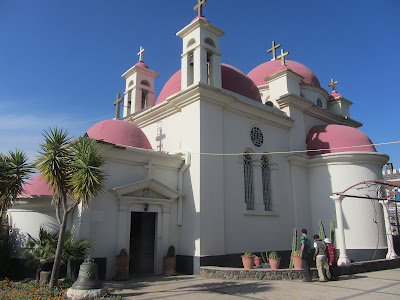 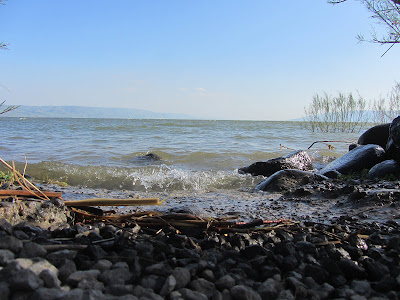 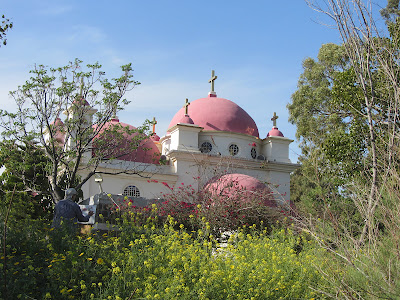 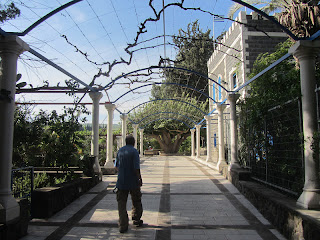 The Church of the Holy Apostles contained a fine examples of Orthodox religious art.  It gives a real feel for what a Byzantine church in its heyday would have looked like.  In the main dome, the apse, and the two side half domes are images that follow the usual Orthodox program: Christ Pantocrator in the Apse, Mary as Theotokos (Mother of God) in the apse, and representations of the Crucifixion (staurosis) and the Resurrections (Anastasis).  Elsewhere throughout the church are paintings representing the call of the apostles and Jesus' ministry with them here in Galilee, such as calming the sea and various miracles.  There is also, on the back wall, an unusual and interesting representation of the Last Judgment. 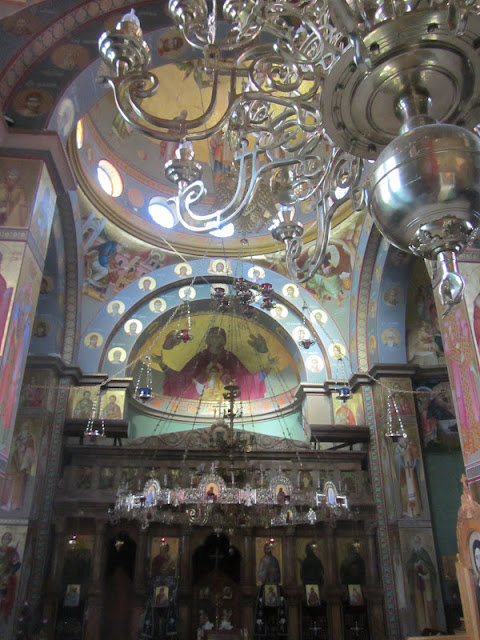 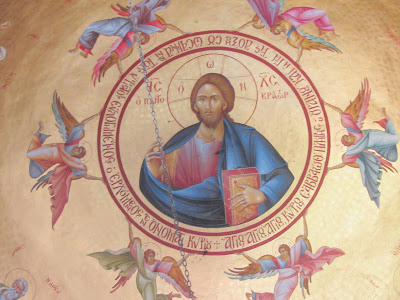