We started the day early, leaving the hotel at 7:30, so that we could spend a lot of time at today’s sites, particularly the first, Ephesus.  On the western cost of Asia Minor (modern Turkey), Ephesus was settled by Greeks early, during the Migratory Period (about 1050 B.C.).  An important city-state through the Archaic and Classical period, it boasted a famous temple to Artemis, which in one of its last incarnation was one of the Seven Wonders of the Ancient World.  The earlier settlement was moved in the Hellenistic period to the site where the current ruins lie.  This city became very important in the Roman period, becoming the fourth, or even the third, largest city in the Roman empire. 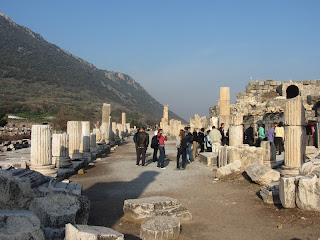 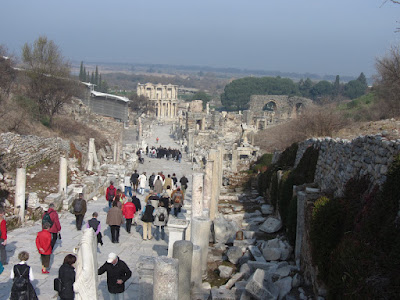 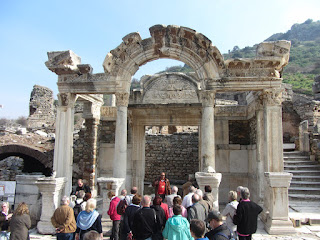 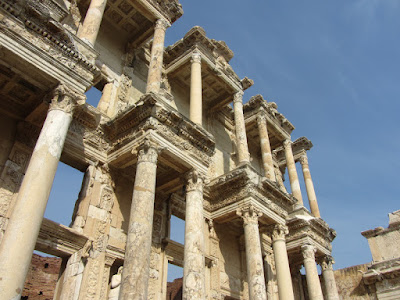 Here is a highlights video of clips from Ephesus:


Ephesus was the scene of important Christian missionary activity by the apostle Paul.  According to Acts 19, Paul spent two years in the city, and he was so successful that local pagans became concerned about the rapid growth of Christianity, which threatened their livelihood.  I recounted this mission as we were seated in the great theater of Ephesus, one of the largest in the world After me, my colleague Jared Ludlow outlined a riot in that very theater that occurred because of the anti-Christian sentiment that Paul’s success engendered.  The students role played this scene after which we sang “True to the Faith” and “The Spirit of God Like a Fire Is Burning.”  A German couple, who happened to be Latter-day Saints, hurried into the theater when they heard us singing, and Jared and I revived what little German we still have to visit with them. 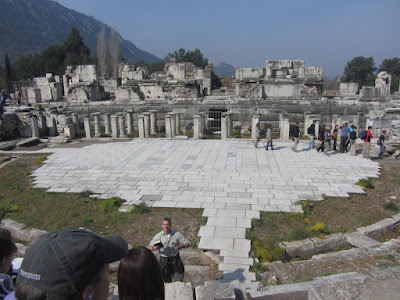 Ephesus has another important New Testament connection, this one with the apostle John.  Early Christian tradition relates that John moved to the Ephesus area, perhaps bringing Mary, the mother of Jesus, with him.  The Gospel of John and the letters attributed to him might have been written here.  The Book of Revelation was written on the island of Patmos nearby off the coast, where John was relegated by either local or imperial officials.  Ephesus is one of the Seven Churches of Asia that the Lord addressed in that revelation.

In addition to the message to Ephesus contained in Revelation 2:1–7, the two beasts mentioned in Revelation 13 may well have been connected with the imperial cult that was rampant in Asia Minor in the latter half of the first century when John received the revelation.  In connection with this, we visited the site of the massive Temple of Domitian that had been built in Ephesus.  All that remains of this massive testament to megalomania is the gigantic platform that had been built for it. 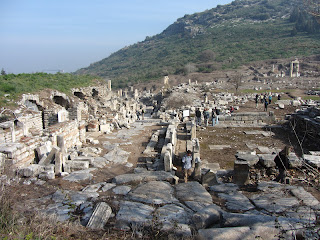 On the way out of the site, we also visited the Church of Mary, which had been built partly for the Third Ecumenical Council that was held in Ephesus in A.D. 431.  We talked about the role of Mary, historically in the traditional Christian churches but also in LDS culture and scripture (e.g. 1 Nephi 11, Mosiah 3, and Alma 8).  As devotionals sometimes do, they go in the direction that the spirit dictates, which is not always what we plan.  After testifying that Mary was the greatest witness of her Son—no one knew better of his divine conception and miraculous birth, and she stood there at the foot of the cross when he died to save us all—I ended up doing one of my “soft feminist” lectures, emphasizing the importance of having female models and examples in the scriptures, using the example of how I feel about my daughter.  And as I veered to a broader discussion of parenting, I also shared how precious each child is, using the example of Samuel and his autism. 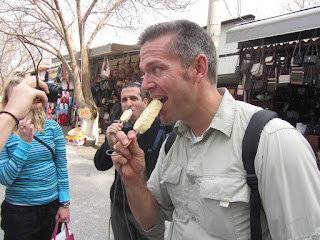 Hellenistic and Roman Ephesus was later abandoned when the harbor silted up.  In the Byzantine period the bishopric, and hence the entire city, later relocated farther inland on a nearby hill.  There we visited the remains of the massive Basilica of St. John the Theologian (or St. John the Divine).  Early Christian tradition had John and even Mary move and die at Ephesus.  So at the supposed grave of John, we talked about the writings attributed to him, his role, his mission, and the LDS take on his continuing mission. 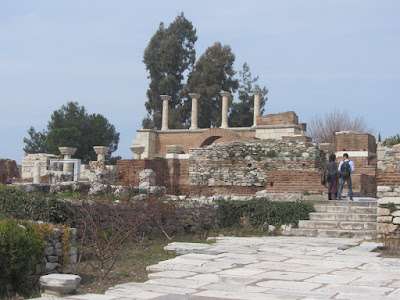 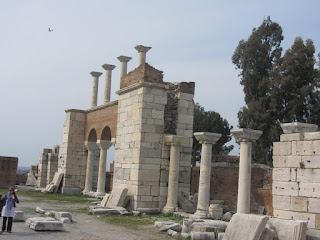 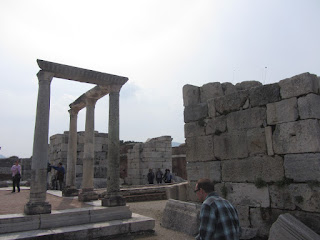 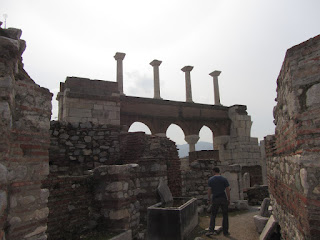 We then drove south to the wonderful little Greek city of Priene.  We had planned to take the students to Miletus, the last place that Paul stopped as he returned to Jerusalem after his final recorded missionary journey.  But at the end of the winter rainy season, it was too swampy for a good visit.  So we climbed the hill to explore this great little site instead.  It has a beautiful little theater, a small Christian basilica, a gorgeous temple to Athena under the looming cliffs that gives a great view across the plain to Miletus, and an interesting, square Bouleuterion (council hall).  In the theater Jared taught about Paul’s final visit with and warning to the elders of Ephesus who had come to Miletus to bid him farewell.  He talked about “farewells” and reunions, how important it was that wed stayed true to our faith.  I shared a few experiences after that as well, talking about saying goodbye to my father a few days before he died.  The last time I was in Priene was in 2004, just weeks after we buried Dad.  We then sang, “Oh What Songs of the Heart,” which is a beautiful song about reunions in the next life. 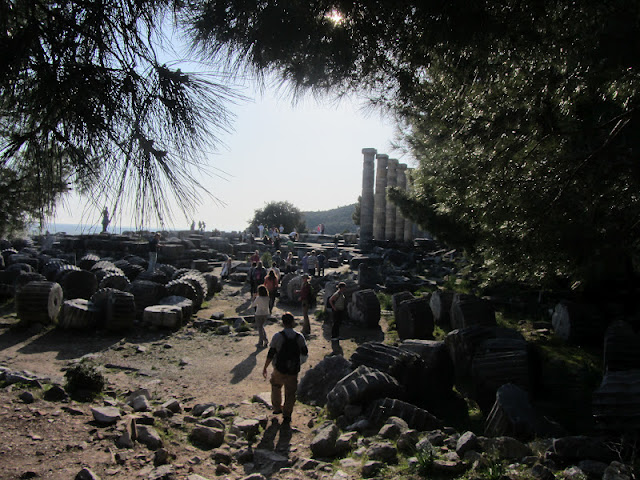 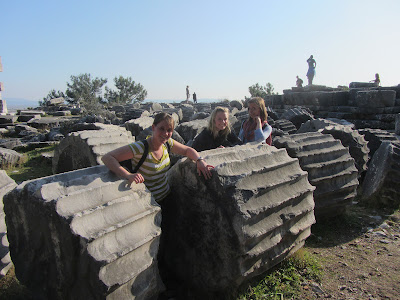 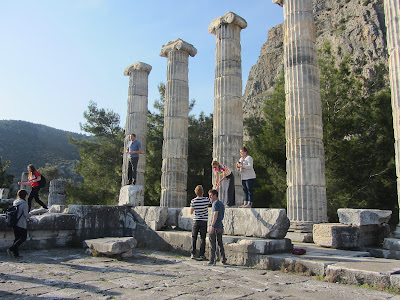 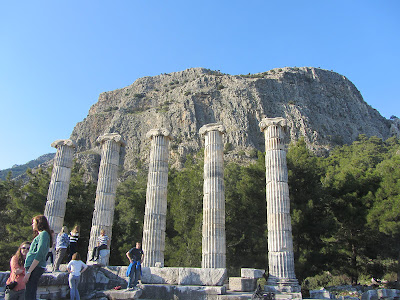 Here is a video highlights montage from Assos: 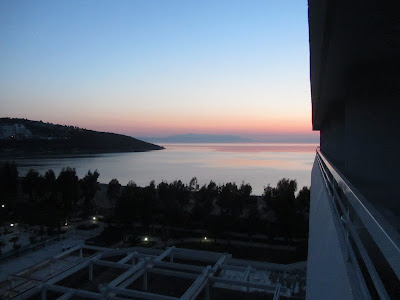