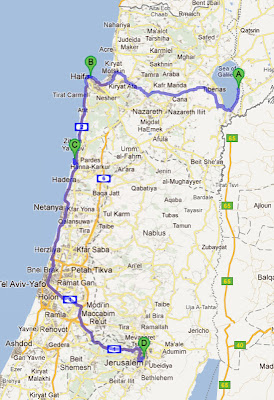 We left Galilee this morning on Day 11 of our rotation and drove to Haifa, the first of our stops at sites on the Mediterranean Sea: Haifa, Mt. Carmel, and Caesarea.  Haifa is the third largest city in modern Israel and serves as its largest port.  But we did not come to see that city itself.  Instead, we drove into the city to visit the Templar Cemetery, after which we drove up Mt. Carmel, where we viewed the Baha'i Gardens from above and then went to Muhraqa, the traditional site of Elijah's contest with the priests of Ba`al.  We then drove down the coast to Caesarea, the city that Herod the Great built as the new port for his kingdom.

See and read about our previous visit to these sites in last semester's blog entry.

Templar Cemetery
The German Templars were a millennialist German denomination that began to settle in the Holy Land about 1850, bringing advancements in agriculture and technology to Palestine.  Early LDS Missionaries in what was then the Turkish mission came to Haifa, primarily to work with resident European Christians like the Templars.  When the first LDS missionary to the Holy Land arrived in 1886, he met a German Templar, whom he has seen beforehand in a dream, and soon taught and baptized him.  His name was J. Georg Grau, and he became the branch president of a small branch of the Church in Haifa.  He and his wife Magdalena are both buried in the cemetery. 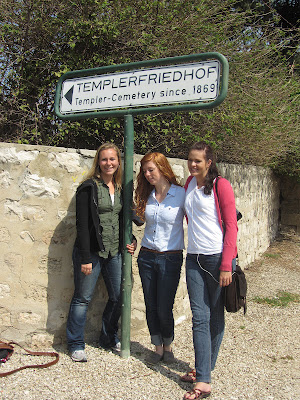 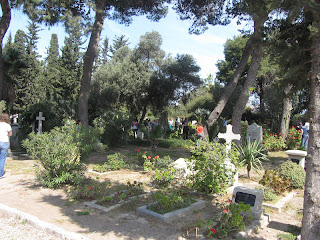 Two young LDS missionaries, Adolph Haag and John Clark came to Haifa in 1892 and 1894 respectively.  Both of these young men died of disease, Haag of typhus and Clark of small pox.  They too are buried in the cemetery, and their graves together with those of the Graus are evidence of early LDS presence in this land.  Visiting them, hearing Kent Jackson read from their journals and letters, and singing fuenral hymns such as "Come, Ye Disconsolate" and "Though Deepening Trials" on the spot was very moving. 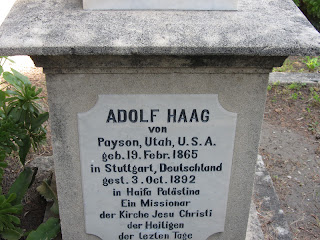 One of our students, Aimee Sioux Washburn, is the great great granddaughter of Adolph Haag. Another, Kelsey Clark, is a distant relative of Clark. 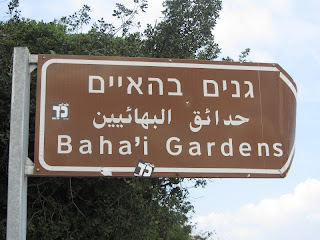 The world headquarters of the Baha`i faith is in Haifa.  In addition to the Universal House of Justice, where their administrative offices are located, their is a beautiful shrine over the tomb of the Bab, the forerunner to Baha`i founder Baha'Ullah (who happens to be buried in Acco, though we did not get to see his grave site when we were there).  The Bab's shrine sits in the middle of beautiful terraced gardens. 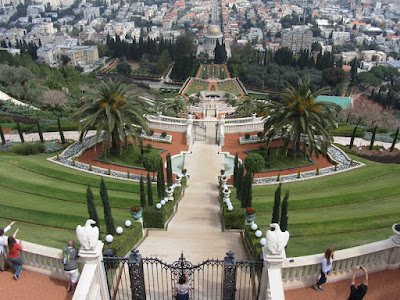 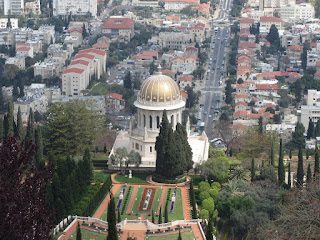 Muhraqa
Muhraqa is the Arabic word for "sacrifice" and recalls the sacrificial contest between Elijah, prophet of YHWH, and the priests of Ba`al in 1 Kings 18.  It is located on the beautiful Mount Carmel, a long ridge actually, that juts northwest into the Mediterranean Sea, forming the bay that makes Haifa such a great port and which separates the Jezreel Valley from the Plain of Sharon to the south. 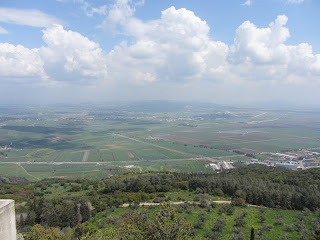 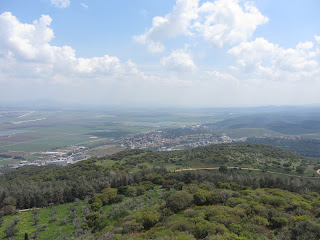 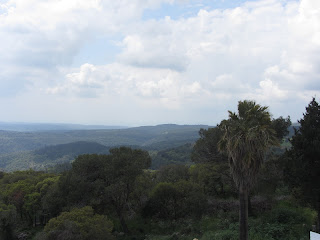 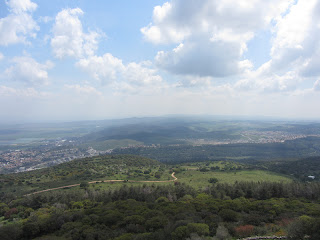 The Carmelites, a Roman Catholic order that was formed here during the Crusades, built a monastery here which was restored when they returned in the seventeenth century.  Here we met the other class, which had been stranded because of a bus break-down.  To help them structure their time a bit, we suggested that they "put on a show" for us, reenacting the contests between Elijah and the false prophets.

After the "play," I took my class in front of the statue of Elijah, where we talked about 1 Kings 19 a little more seriously.  We then went into the small, simple Caremelite chapel, where we sang a number of reverential hymns and having a prayer before going up on the roof of the monastery to appreciate the view from the lookout spot. 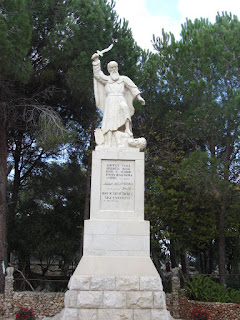 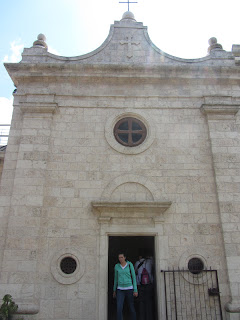 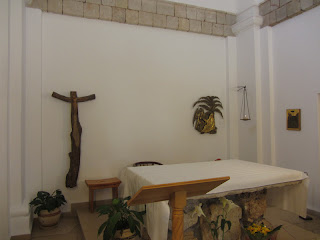 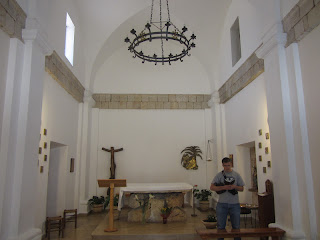 Caesarea
Our last stop was Caesarea Maritima, the city on the coast that Herod the Great transformed into a busy port and the most important Greco-Roman city in his kingdom.  Later it became the capital of the Roman province of Judea, and it was here that Cornelius became the first Gentile convert baptized.  Paul was held here for two years and tried before appealing to Caesar and being sent to Rome.

First we stopped outside of the site itself to look at the remains of the aqueduct to the north of the ancient city. 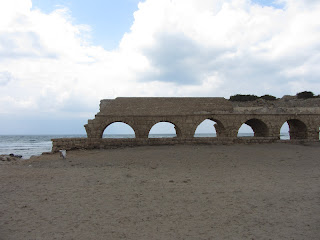 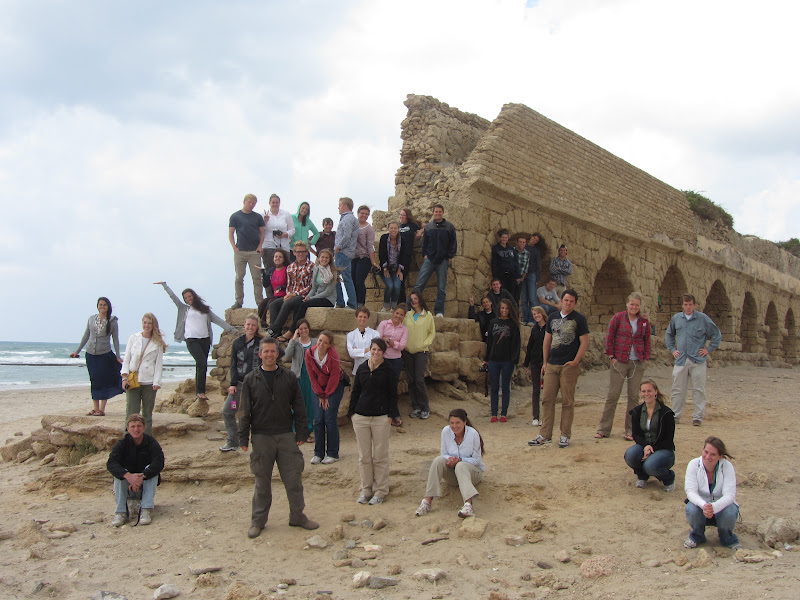 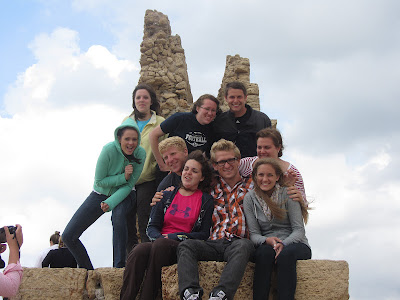 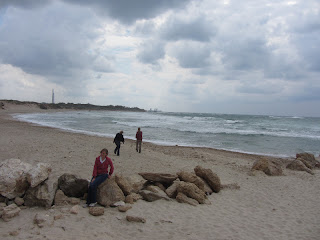 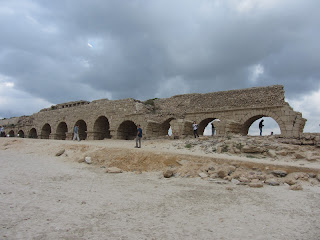 We then entered the site itself.  Jared Ludlow talked to our students about the history of the site in its theater, after which I led the students down to the remains of Herod's palace, which was later used as the headquarters of the Roman governors, where I taught from Acts 24-26. 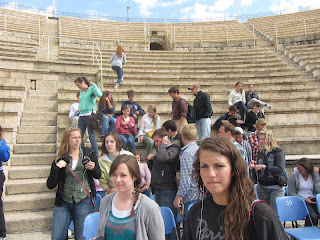 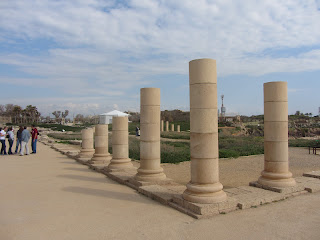 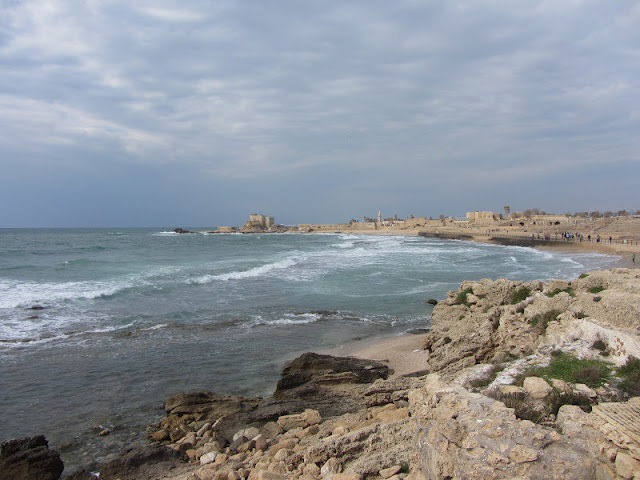