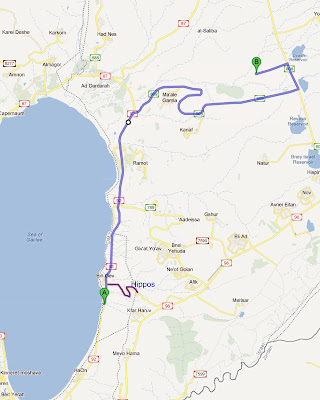 Today we had a half day field trip, officially called the "Golan Field Trip," although we only went to two sites in the southern part of the Golan Heights and will actually spend more time in the Golan during our Upper Galilee Field Trip (Day 9).

What we now call the Golan appear first in the Bible as Bashan, the kingdom of Og that was defeated by Moses before his death (translation) and given to half the tribe of Manasseh.  Part of it, the southern end next to the Sea of Galilee, was also known as Geshur.  The daughter of the king of Geshur became on the of the wives of King David and bore to him Absalom.  When he fled from David after the Amnon and Tamar incident, Absalom found refuge in Geshur.  Southern Golan became the territory of Greek cities in the Intertestamental Period and became part of the Decapolis in New Testament times.  Most of the Golan, then known as Gaulanitis, became part of the kingdom of Herod the Great and was bequeathed to his son, Philip, who ruled it as tetrarch during the time of Jesus.

Here is the highlights video: 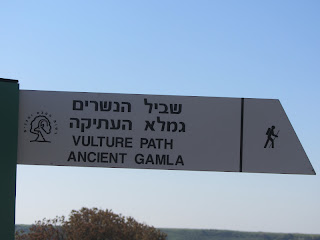 The area of Gamla has been inhabited from very early times, at least from the Early Bronze Age and perhaps in the preceding Chalcolithic and even Neolithic (New Stone Age) periods.  Around the site today are the remains of many dolmen tombs, a very early burial type that features stone slabs set on two side stones; these form a "table" under which the body was placed.  Smaller rocks were then piled around the table and a mound of earth covered it all, though over the millennia the earth and smaller rocks have eroded, just leaving the stone tables standing exposed.


Gamla takes its name from its site, which looks much like a camel's hump (gamla means "camel" in Aramaic).  The Seleucids, the Greek dynasty of Syria in the Hellenistic period, first built a fort here on a high hill top that has cliffs on three sides: facing the Sea of Galilee at the end of a wide and deep wadi, it can only be approached from the east side, which can be easily defended by a wall.
Jews seem to have been living here by the second century B.C., and the entire Golan was brought into the Jewish Hasmonean kingdom in the early first century.  At the time of Jesus, Gamla was part of the tetrarchy of Herod's son Philip.  Significantly, a synagogue has been discovered in Gamla that is the earliest known synagogue in the entire Holy Land (the synagogue that we saw in Capernaum, for instance, dated to the fourth century, though it might have been built on the foundations of an earlier first century synagogue that would have been standing at the time of Jesus. 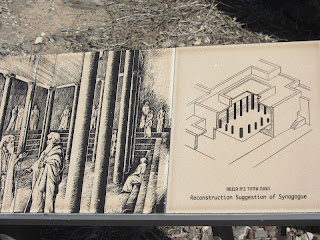 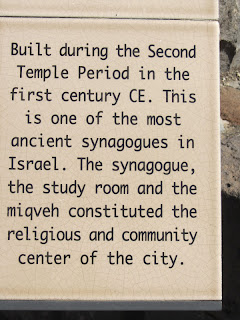 Although Gamla is never mentioned in the New Testament, Luke 4:14-15 does say that "Jesus returned in the power of the spirit into Galilee: and there went out a fame of him though all the region round about. And he taught in their synagogues, being glorified of all."  From the west end of Gamla one can see right down the wadi to the Sea of Galilee.  It is conceivable that this was part of "the region round about" and that the Lord may have been in this very synagogue.  This gave us occasion for a devotional, where we talked about the message of the pre-Easter gospel that the kingdom of God was at hand and what that kingdom meant in our own lives today.

The Jews of Gamla got caught up in the First Jewish Revolt of A.D. 66-72.  At that time the Golan was part of the realm of Herod Agrippa II, who remained loyal to Rome.  When his general Philippus was forced to withdraw, the Jewish rebel Yosef ben Matthias, later the historian Josephus, sent forces into Gamla and fortified it with a new wall across the exposed eastern side.  It was to no avail.  In A.D. 67 a Roman siege eventually broke through the wall.  Of the 10,000 people trapped inside, 4,000 were killed and another 5,000 jumped to their deaths off the steep cliffs on the far side of the fortress. 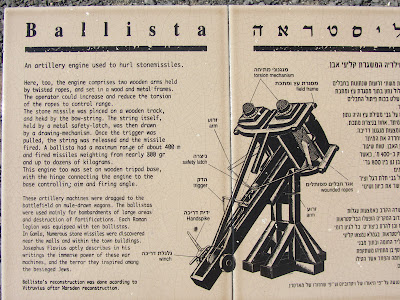 Today Gamla is part of a national park and a nature reserve.  After visiting the archaeological site, we hiked along one of the side wadis to see a fantastic water fall, one of the highest in the Holy Land. 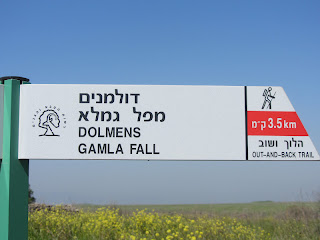 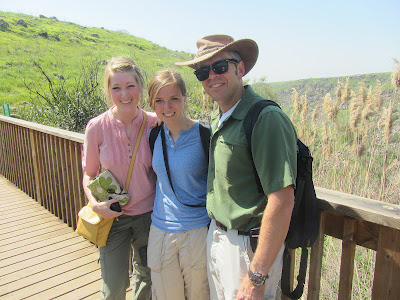 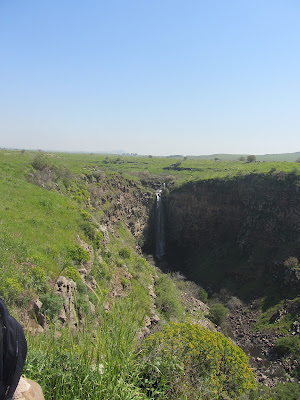 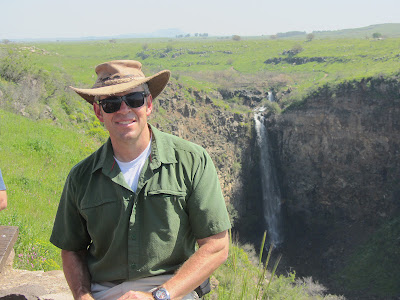 Hippos
Next we went to the Susita National Park.  Susita means "horse" in Aramic, and it is the local name for the Greek city of Hippos (which also means "horse").  Like Gamla, Hippos was built on a highly defensible spot in the southern Golan directly overlooking the Sea of Galilee.  The Seleucids built it to control the road leading from Scythopolis (Bet She'an) up to Damascus.  In the New Testament period, it was a Greek city of the Decapolis, literally "a city on a hill that could not be hid" (Matthew 5:14) because it can be seen from Galilee below. 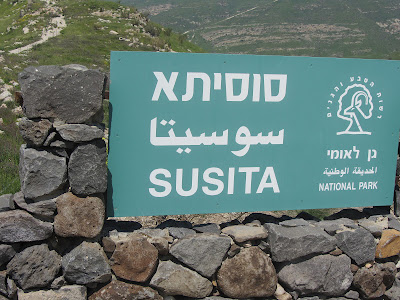 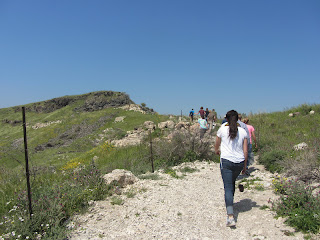 In relatively recent history, the site of Susita played a role in the conflict between Israel and Syria.  In 1948, kibbutzniks from `En Gev below fought their way up to the site and held it against Syrian fire from the higher plateaus on the other three sides.  It literally became the front line between Syria and Israel until Israel captured the Golan Heights in 1967. 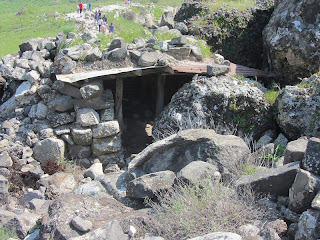 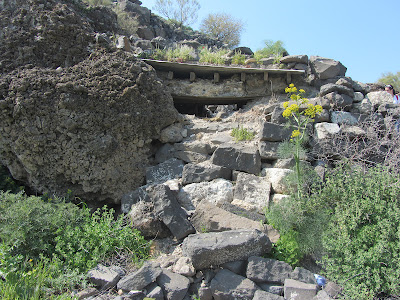 The Greek city of the Decapolis became an even more prosperous Greco-Roman city of the new province of Palestinia Secunda following the Second Jewish Revolt.  An aqueduct with a reverse siphon brought more water in from the Golan and up to the city.  A great Decumanus Maximus (east-west street) led from the east gate to a forum, a shrine of the imperial cult, and all the accoutrements of a great Roman city.

In the fourth and fifth centuries, Hippos gradually became a Christian, Byzantine city.  In this period several Christian basilicas were built, using expensive pink granite columns imported from Egypt.  In other public buildings, local dark basalt stone was used, but the columns were covered with plaster and fluted to look like more expensive stone.

In A.D. 636 the Arabs defeated the Byzantines at the nearby Battle of Yarmouk.  Shortly thereafter Hippos, like the rest of Palestine, surrendered to the Muslims.  They were allowed to continue to practice their Christian religion and persisted as a Greek city for another century or so, though the city declined in prosperity and population.  When the great earthquake of A.D. 749 leveled the city, the survivors could not afford to rebuild and the site was abandoned.

End of a Good Day
Later in the afternoon, my family arrived from Jerusalem, after some mishaps, such as a flat tire outside of Jericho.  It was great to see them again.  We love being in Galilee, away from the stress, tension, and congestion of Jerusalem.  Samuel likes being near "the ocean blue," as he calls the Sea of Galilee.  They will stay here with me through Tuesday.

We ended Day 4 with the traditional dinner at `En Gev's fish restaurant.  We then took the students around the lake to Tiberias for ice cream and an evening of walking along the seaside promenade. 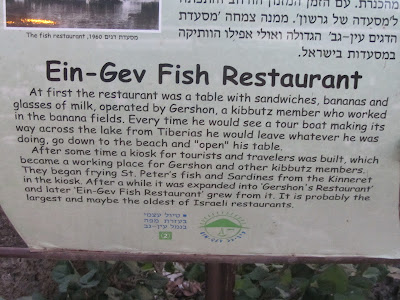 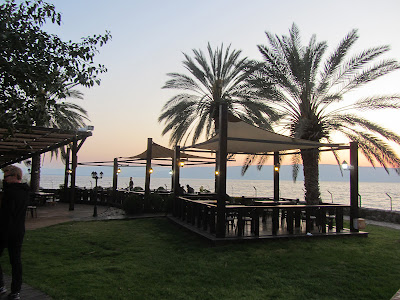 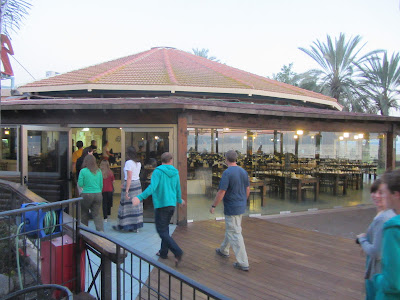 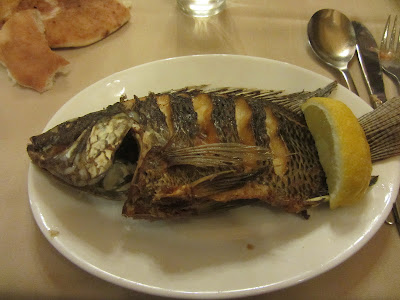 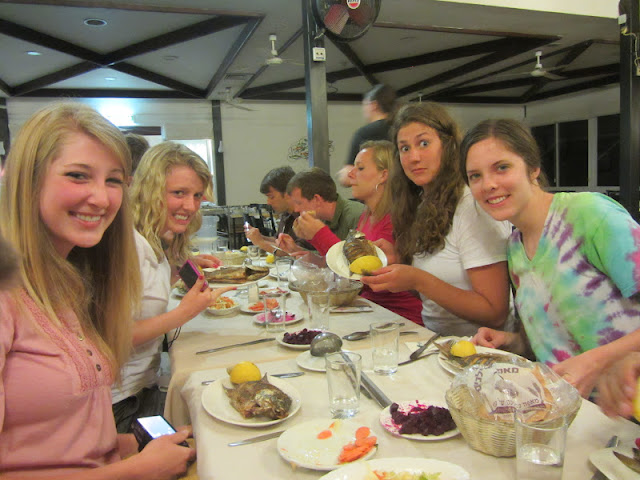