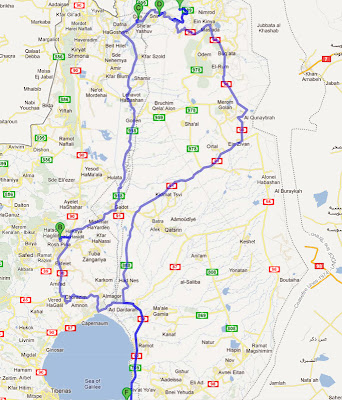 Today's field trip took us to sites through much of what is often called "Upper Galilee."  Click here to see last semester's visit.

While the first site, Hazor, is due north of the Sea of Galilee, and the second, Dan, is further north at the top of the Hulah River Valley, the last few places we visited are, in fact, in the upper reaches of the occupied Golan Heights, and we drove back across the Golan to return to `En Gev.  We covered a lot of ground today, and not just geographically.  The sites we explored covered the full range of biblical periods---from Bronze Age through the Old and New Testaments---and even reflected events from the Crusader and modern periods.

Today was fun for me because my daughter, Rachel, accompanied us on the field trip.  Elaine stayed back at `En Gev with Samuel.  The two of them had a relaxing day together, and she treated our boy to a trip to get a real hamburger and ice cream.


Hazor
Tel Hazor has been described as one of the largest and archeologically richest sites in Israel.  Its largest settlements were in the Bronze Age, when great Canaanite cities on the site dominated not only the Upper Galilee but also much of  northern Canaan.  According to the biblical record, Joshua defeated the northern Canaanites and destroyed the city, and an archaeological burn level seems to substantiate this.  Nevertheless, by the book of Judges, Hazor was again ruled by a powerful Canaanite king, whom Deborah and Barak needed to defeat.  I reviewed this story on site, using the examples of Deborah the prophetess and Jael the heroine as examples of female role models in scripture.

Solomon refortified the site, making it a regional center and one of his "chariot cities."  It was further expanded by Ahab and the Omride kings of the northern kingdom of Israel.  It nonetheless never recovered after its capture and destruction by the Assyrians.

This tell, its history, and in particular its water system (a massive, deep shaft and then long sloping tunnel to a covered spring) were the inspiration for James Michener's historical novel, The Source. 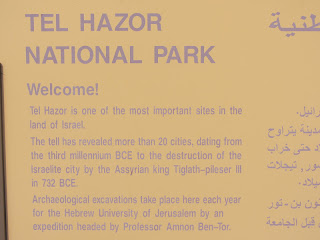 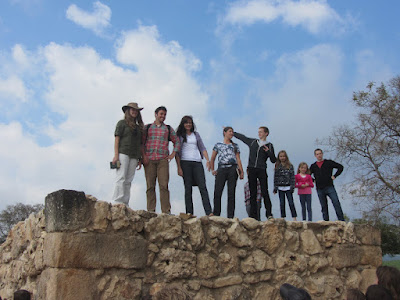 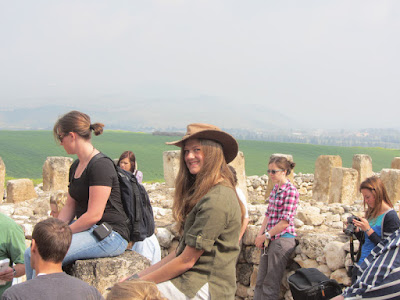 Dan
Our next stop was Tel Dan, in the farthermost northern extent of Israel.  In the biblical period, Dan was a defining point in Israel’s boundaries, as seen in the expression, “from Dan unto Beersheba.”  As we walked up to the archaeological site, we passed along the rushing headwaters of the Jordan River, which emerge from countless small springs that converge to form the gushing torrent.  The trees and plantlife in this wet area are amazing, completely different from almost any other spot in the country.  We stopped at one point for a devotional, using the water flowing from the rocks as a prompt for a discussion of John 4 and 7, noting how Jesus is the fountain of living waters.  We then sang “Rock of Ages.” 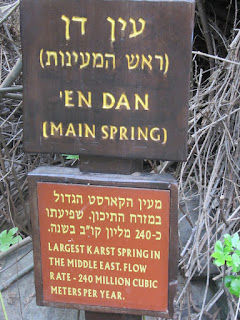 The tel itself is the site of the cultic high place established by Jeroboam I as an alternative to the Jerusalem temple.  Right next to the pre-1967 border, it also provides an overlook site to the no-man’s land that once existed between Israel and Syria (see last semester’s blog entry, which has maps and discusses this in more detail).  We then walked around to the Bronze Age brick gate, perhaps visited by Abraham, and the later Israelite fortifications.

Banias
Banias is the source of another one of the headwaters of the Jordan. Like `En Dan, the "spring of Dan," water from the springs at Banias literally come from the rocks under the face of a high cliff.  In that cliff there is also a cave that was identified in the Hellenistic Period with the Greek god Pan, hence the ancient name Paneas and the modern name Banias (Arabic does not have a "P").  Here Herod the Great built a temple honoring Augustus Caesar, who was a "son of a god" (i.e. the deified Julius Caesar).  As a result the place was renamed Caesarea.  Later, when Herod's son Philip inherited this part of the kingdom, he added his own name, hence Caesarea Philippi (as opposed to Caesarea Philippi on the coast).

This is where Peter made his famous confession that "Jesus was the Christ, the Son of the living God" was made (see Matt 16:16).  Before we went further to explore the site, we sat around a teaching area and reviewed the Synoptic accounts of this confession and talked about when and where we were when the spirit of God first witnessed to us that Jesus was the Son of God and our Savior.  I shared some of my own experiences, and we sang "I Know that My Redeemer Lives." 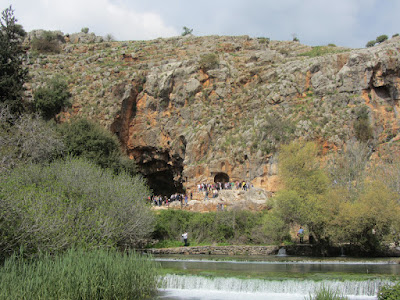 The waters from Banias flow a kilometer or two and then plummet down a deep gorge to create magnificent falls. 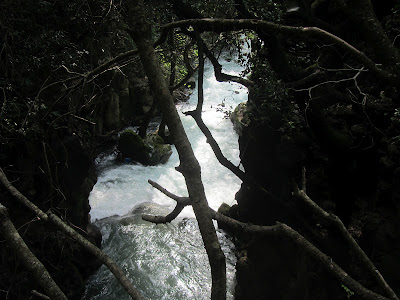 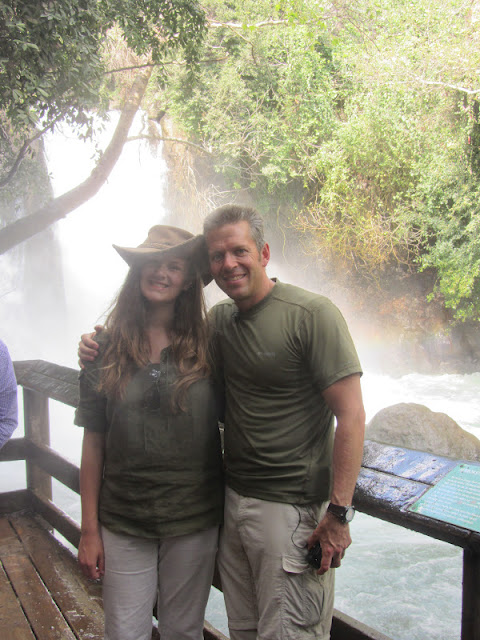 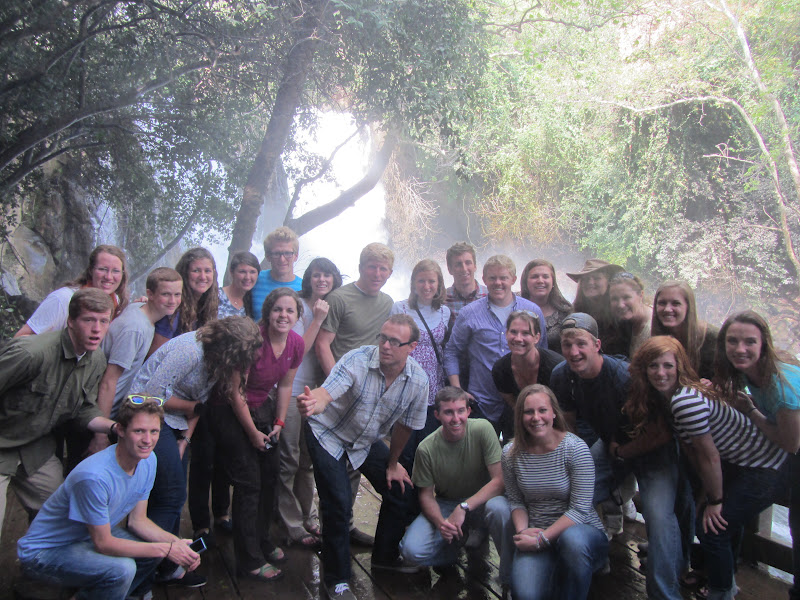 Nimrod's Fortress and Har Bental
The last two sites that we visited were both in the far northeastern corner of the Golan.  One was a Muslim fortress built to keep the Crusaders from advancing towards Damascus.  The other was a modern Israeli outpost built between 1967 and 1973 to keep watch over Syrian lines, anticipating when they might pour over the frontier to try to recapture the Golan. 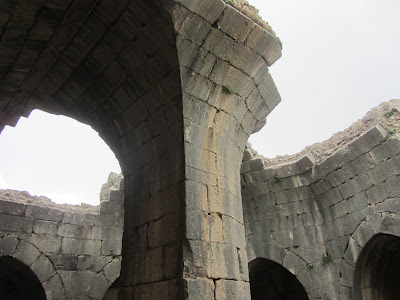 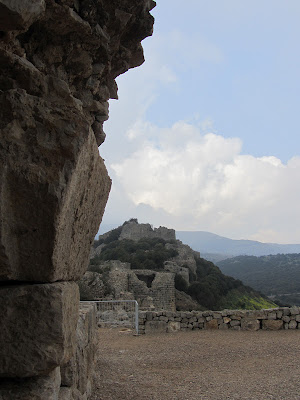 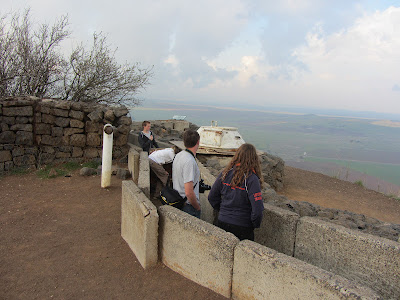 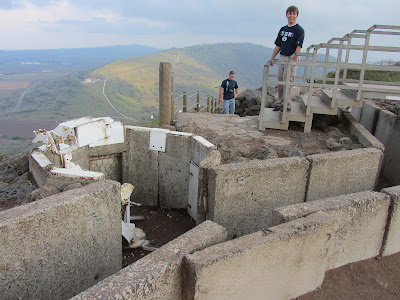