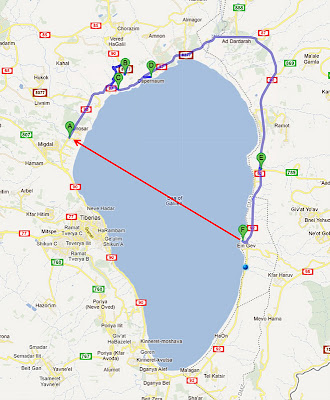 Galilee Day 2 (11/15/11):  Without a doubt, today was one of the real highlights of our time in Israel so far.  We spent the entire day on or around the Sea of Galilee, visiting the places where so much of Jesus' ministry took place.  Some of this we saw in our faculty pre-trip back in August (and I have been here on two occasions before then), but being here with the students completely changed the experience.  As much as possible, when we are on site we not only visit locations and talk about them historically, archaeologically, or even scripturally.  We try to be true pilgrims, experiencing the sites and worshiping at them.

All the previous night rain fell steadily, so we were really relieved, and felt blessed, when we arose and found a clear, beautiful day awaiting us! 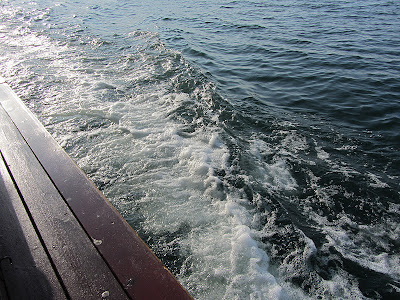 We started the day with a boat ride across the Sea of Galilee, from the boat dock new our En Gev kibbutz over to Ginosar, a kibutz on the other side.  The Israeli boat company knows its clinetele, who are mostly Christian pilgrims especially evangelicals, so soon after we set out they turned on a lot of "praise" music.  As you may have noticed from the clip above, with a little encouragement from me, the students joined in whole-heartedly.  Those of you who know me know that my worship tastes are rather broad: mainstream LDS, to be sure, but with a fondness not only for high church services but also gospel music and "old time religion" preaching and singing (one of the great benefits of my high school years in Tennessee and affiliation with Young Life).


But the singing and dancing was only the warm-up to our Galilee Boat Devotional.  Our captain stopped in the middle of the sea so that we could take a half hour to read from the scriptures, sing hymns (in a more traditional LDS style), and pray together.  I read and taught from Mark 4:35-41, and then my friend and colleague "Jay-Rowdie" Ludlow taught from Matthew 14:22-33.  We then sang "Master the Tempest is Raging" followed by one verse of "Come, Follow Me." 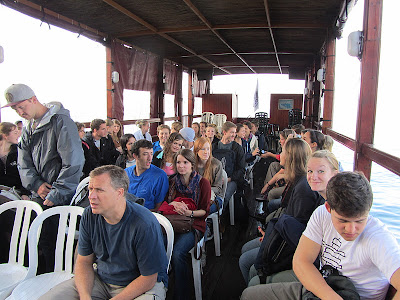 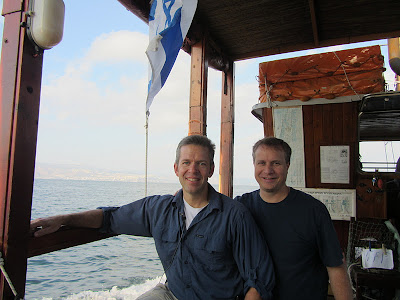 After we disembarked, we went into a museum in Nof Ginsosar that contains the remains of a first century boat.  Known officially as the Sea of Galilee Boat, it is sometimes called the “Jesus Boat,” because it was the kind of boat that the Lord’s disciples Peter and Andrew and James and John would have used.  And this may have been the kind of boat that Jesus himself rode in, walked over the water to, and on occasion taught from. 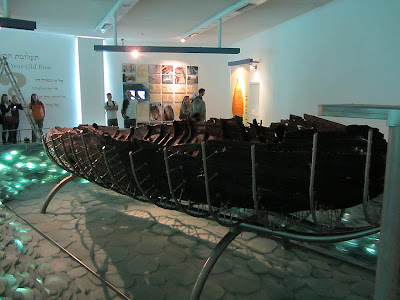 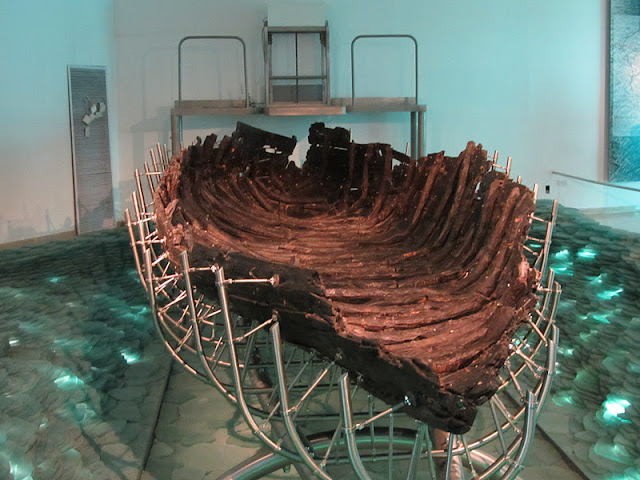 After watching a movie about its discovery and preservation, we went in and looked at the boat itself.  Its craftsmanship is very good, its builders have been skilled woodworkers who used several different kinds of wood, knowing which kind would be best for which part of the boat.  Although there is no indication that either Joseph or Jesus, both known as “carpenters” (though tekton could just mean “craftsman”), built boats, thinking about Galilean carpenters while looking at the remains of the boat was in itself interesting. 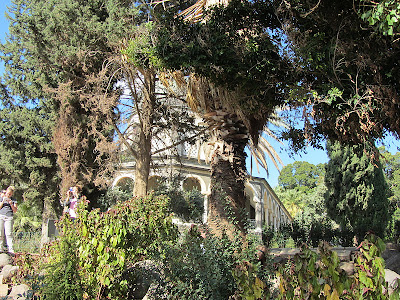 Next we went to the site commemorated as the Mount of the Beatitudes.  Earlier the Sermon on the Mount was recalled in a no-longer existing Byzantine church a little south and west of here, but in 1938 a new Roman Catholic church was built by Mussolini of all people (it was part of his campaign for fascist Italy to make peace with the church).  The church itself is octagonal, with each of the sight sides representing one of the Beatitudes in Matthew 5:3-12.  But the real draw is the property itself, which is beautifully landscaped. 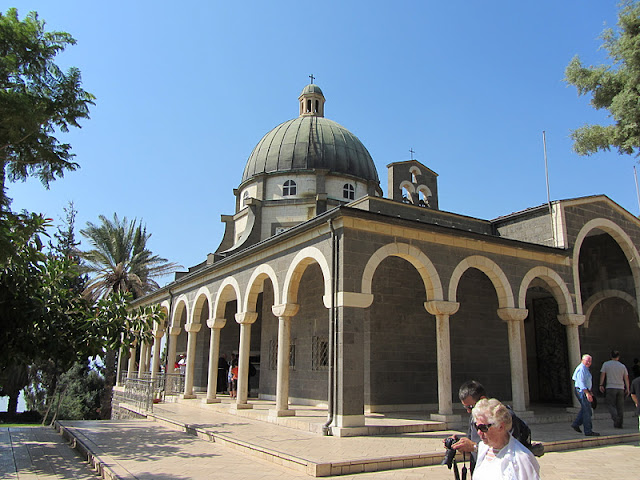 We had made previous arrangements with a sweet nun, Sister Mary Rose, who assigned us a nice meeting area at the lowest part of the property with a good view of the sea.  When we got there, a group of German Pentecostals were singing and worshiping.  When I was about to teach the Sermon on the Mount hardly seemed like a good time to be angry, rude, or pushy, so we waited patiently for them to get a stopping place, when I used what little remains of my German to explain that we had the site reserved but had enjoyed their singing.  They were kind and there were some mutual “God bless you’s.”  I love feeling Christian unity with other pilgrims in this land. 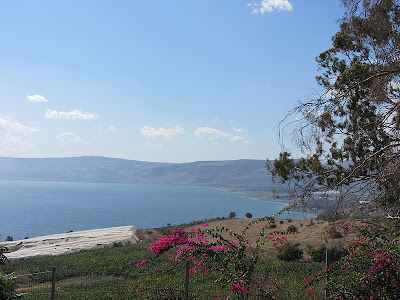 Because the site closes for a couple hours around noon, we had less time there than I would have hoped.  So I kept my talking short.  Instead, after simply setting up the Sermon on the Mount, I had eight of our students each read a Beatitude each, after which we all recited the Lord’s Prayer together.  That was very powerful.  We then sang “More Holiness Give Me” and “I’m Trying to Be Like Jesus.”  After asking one of our students to offer prayer, we had the students scatter for 15 minutes of quiet alone time until we needed to leave.
Sitting there on a rock surrounded by flowers with the fall breeze blowing through the trees and with the site of the Sea of Galilee in front of me is a memory that I will cherish.  I think it was President Hunter who once called the Sermon on the Mount the “constitution of the a Christian,” and I have often taught students that no committed Christian should be able to read Matthew 5-7 without being called to greater holiness and a purer heart.  As I sat there, I let the spirit lead me to those things I need to change in my life.  There was no feeling of remorse or guilt—that is not what grace is about. Rather I felt cleaned and empowered, because I know that Christ can remake me each day to be more like his image.

Next we went to two sites nearby which commemorate events from Jesus’ ministry even if there is no clear evidence, other than tradition, that this is where these events happened.  One, Taghba, is the Arabic name for the Byzantine site of Heptapegon or “Seven Springs.”  Because this is where Byzantine pilgrims often had picniced, this is where they imagined the Feeding of the 5,000 occurred.  We read the account of this miracle in Mark 6, but then I taught about the Bread of Life from John 6. 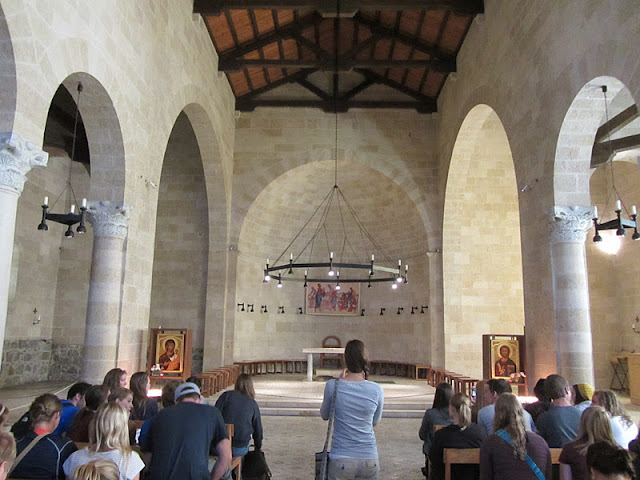 The other site is called St. Peter’s Primacy.  It recounts the Risen Lord’s final interview with Peter in John 21. After having Jared teach us on the shore, in a setting much like where Jesus provided the meal of broiled fish for 7 disciples, we went into the small church and enjoyed its marvelous acoustics as we sang “Love One Another” and “Jesus of Nazareth, Savior and King.” 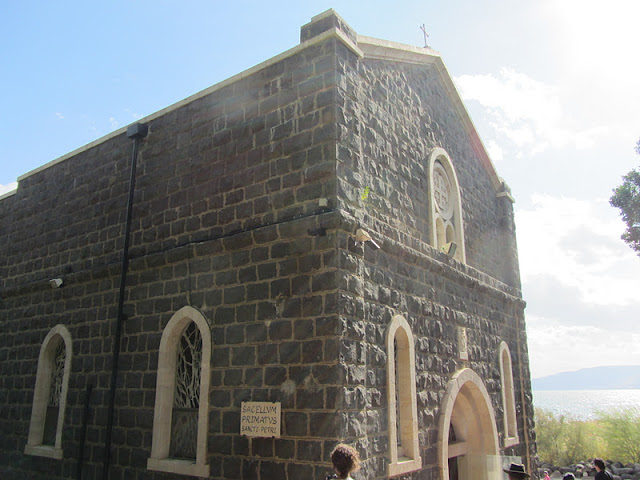 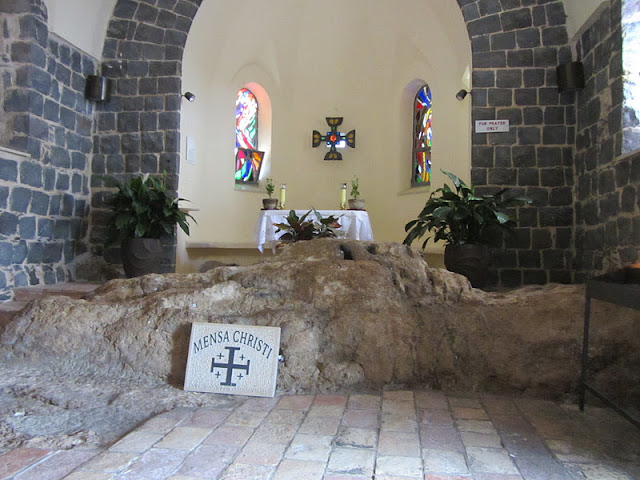 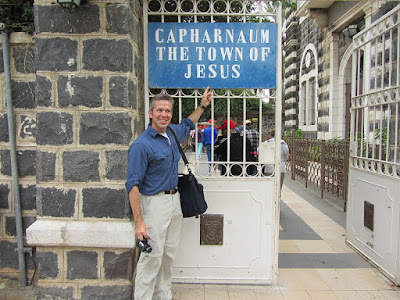 Our next site was Capernaum, which was Jesus’ headquarters for much of his Galilean ministry, so much so that it was known as Jesus’ “own city” (Matthew 9:1).  We started our time at this site by heading directly to the boat dock, where we read the accounts of the calls of Peter, Andrew, James, and John from their fishing boats.

We then went up to the impressive ruins of a white, fourth century Jewish synagogue.  It lies upon the dark basalt foundations of an earlier synagogue, which for a long time were taken to be from the first century—that is the time of Jesus.  While that is somewhat debated now, it was a wonderful place to read the accounts of Jesus’ casting out the evil spirit in Mark 1, as well as other miracles done in Capernaum. 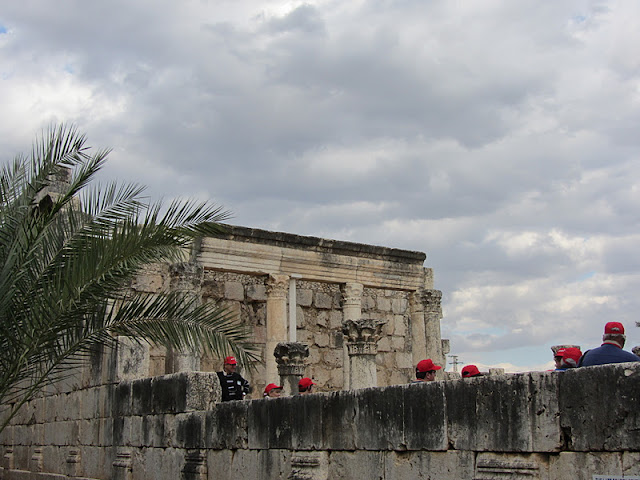 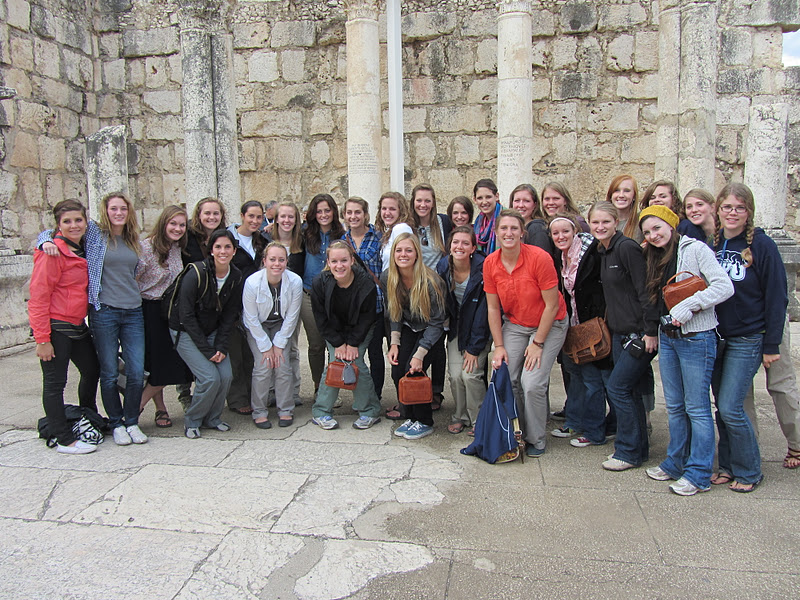 Another miracle in Capernaum at the outset of the Lord’s ministry was the healing of Peter’s mother-in-law.  This took place in the house that seems to have been Jesus’ headquarters.  And from a very early period, Christians used that house as a meeting place.  This so-called House Church of St. Peter was later replaced by a Byzantine commemorative church (octagonal, centrally-planned rather than the otherwise typical basilica plan).  Now a modern-esque octagonal Franciscan church hovers bug-like over the ruins of the earlier buildings, constructed in such a way that one can see the archaeology below.


More recorded miracles were performed in Capernaum than anywhere else.  Many teachings were delivered there as well.  Unfortunately, the crowds and the nature of the site did now allow us to do a full devotional.

By this time we were all VERY tired, but we had one more site to see on our drive back to En Gev.  On the east side of the Sea of Galilee, which was largely Gentile in Jesus’ time, is Kursi, a site that became associated with the casting out of the legion of devils.  Once again, a Byzantine church was built on the site (gotta love those Byzantines!), but after visiting that and reading the various accounts of this miracle, we climbed up the steep hillside, partially to get a beautiful view of the Sea of Galilee as the sun set but also to imagine the poor herd of pigs plummeting to their deaths.  We grew a bit silly at this point, but sometimes silliness can be employed as a teaching tool: we had pig races down the hill! 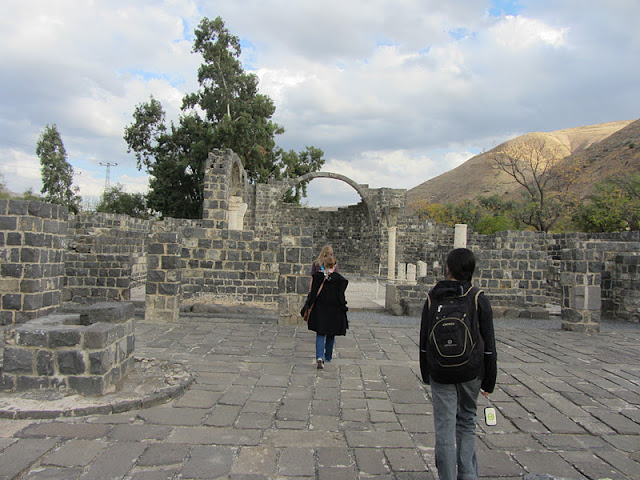 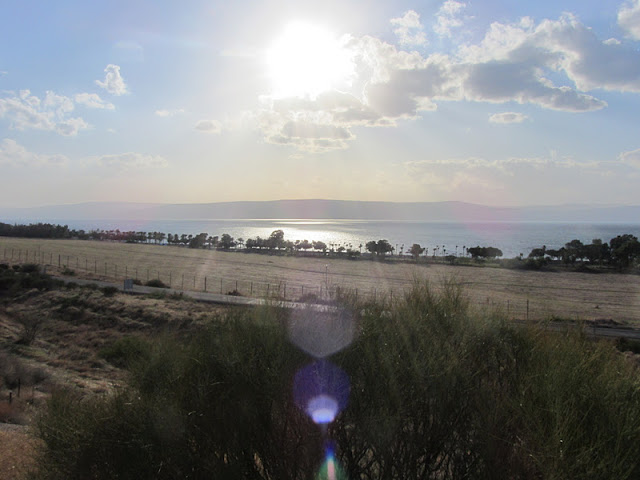 When we got back to the kibbutz, I went back to my room and had about an hour and a half before dinner.  I lay down and was soon dead asleep!  This evening the students had a bon fire on the beach.  Tomorrow my students stay here for three hours of intense New Testament class and several more hours of study on their own, while the other class goes out on a field trip (this means that you may get a break from the blog tomorrow!)