En Kerem, the home of Zacharias and Elizabeth

Tomorrow may be Halloween in the U.S., but I am already thinking about Christmas as we begin going to sites associated with the Infancy Narratives of Matt 1-2 and Luke 1-2.  Today we took a family outing to En Kerem, or "Spring of the Vineyard," which is the site traditionally associated with the home of Zacharias and Elisabeth.  Luke uses this righteous couple to serve as a foil for Mary and Joseph, with the annunciation to Zacharias and John the Baptist's birth serving as both a comparison and contrast to the annunciation to Mary and Jesus' birth in Bethlehem.  (See chapter 1 of my Good Tidings of Great Joy, now available at Deseret Book)

Zacharias was a temple priest, but there were so many priests in that era that they only actively served in the temple a few weeks a year.  The rest of the year they lived in their own homes throughout the land.  In the case of Zacharias and his wife, Elisabeth, that home was in "a city in the hill country of Judah" (Luke 1:39).  Since Byzantine times, that city has been identified with the village of En Kerem, now a beautiful suburb west of Jerusalem whose name means "Spring of the Vineyard." 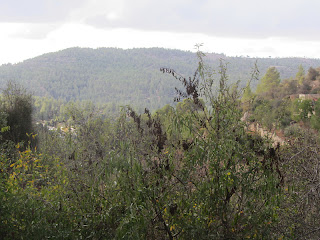 After the appearance of the angel Gabriel in the temple to Zacharias, he returned, perhaps to here, where his wife, who was old and had long been considered barren, miraculously conceived.  Here Luke has applied the motif of Sarah and Abraham, as well as that of Hannah and Elkanah.

Immediately after this, Luke switches scenes to Nazareth (give me a few weeks, we go to Galilee two weeks from tomorrow) for the story of the Annunciation to Mary (Luke 1:26-38).  As part of that, Gabriel told Mary that her relative (KJV "cousin") Elisabeth was also miraculously pregnant.  That led Mary to travel to the hill country of Judah to visit Elisabeth and Zacharias.

According to early Christian tradition, the village's spring, for which the modern town is named, was the place where Mary and Elisabeth met.  The spring still runs from under a mosque. 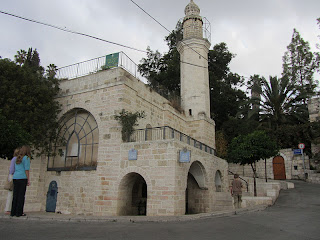 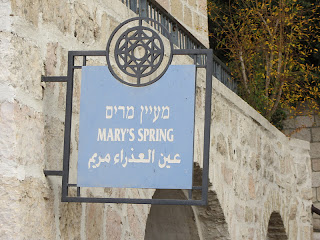 The meeting of the two women is better commemorated up the hill under a church that was associated with a cave, where legend holds that Elisabeth later concealed the baby John during the Slaughter of the Innocents.  Remnants of earlier Byzantine and Crusader churches are contained within the current Church of the Visitation, built by the Franciscans in 1946.


In a small courtyard garden of the church, away from the area in front that was crowded with pilgrims, we did a reading of the story of the Visitation, including the Magnificat.  The Magnificat is the first of Luke's four canticles, or liturgical songs, which he weaves into his Infancy Narrative.  It is easily the most beautiful.

Rachel took the part of Mary.  My daughter is 14.  We do not know Mary's age at the time, but she may easily have been that young, making Rachel's reading particularly touching.


Lower down the hill is a church dedicated to John the Baptist.  In a grotto under it is the traditional spot of the prophet's birth.  In the courtyard in front of it are numerous plaques, each with a translation of the Benedictus into different languages.  The Benedictus is the second Lucan canticle.  Though it is ostensibly the blessing that Zacharias pronounced upon his son at John's circumcision and blessing, most of it is actually about the coming Christ. 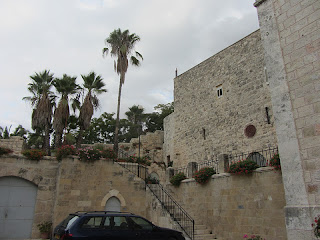 Today was a wonderful outing, made all the better because I did it with my family.  And one of the best parts of that was that we were (largely) able to keep Samuel interested and engaged.  These kind of excursions are not always easy or interesting to him, but we feel strongly about giving him these experiences.  Visit Samuel's Page and scroll to the bottom to see some of the "other" side of today's trip.
Posted by Eric D. Huntsman at 10:32 AM