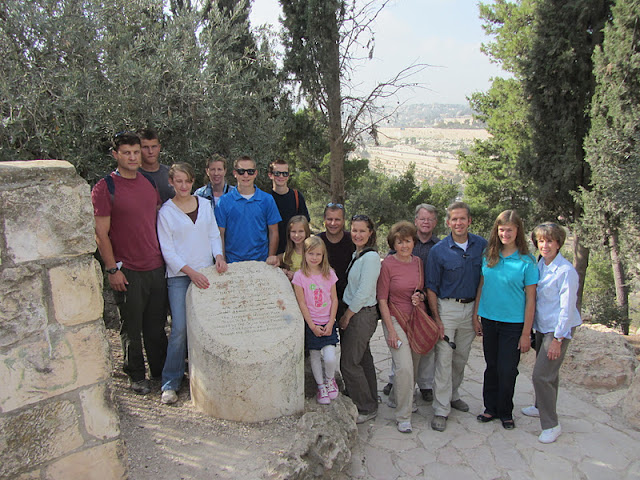 "Pray for the peace of Jerusalem: they shall prosper that love thee." (Psalms 122:6)

Tomorrow will be the 170th anniversary of Orson Hyde's blessing upon the Holy Land.  To commemorate this event, this morning the faculty and many of their families walked across the middle slope of the Mount of Olives to the Orson Hyde Memorial Gardens to view the Old City from this beautiful spot and to remember the prayer that Elder Hyde had pronounced upon this city and this land somewhere on this mountainside.

The gardens were developed in 1979 by the Orson Hyde Foundation, a branch of the Jerusalem Foundation, which consisted largely of interested Latter-day Saint donors.  The land of the garden is part of the belt of Jerusalem parks that surrounds the Old City.  At the dedication of the garden on October 24, 1979, Jerusalem mayor Teddy Kolleck was joined by many leaders of the LDS Church at the time, including President Kimball, President Tanner, President Benson, Elder LeGrand Richards, Elder Howard Hunter, and Elder Marvin Ashton. 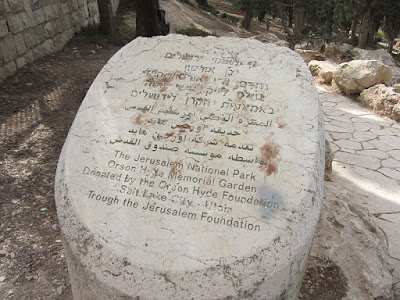 Orson Hyde (1805-1878) was an apostle and a member of the Council of the Twelve of The Church of Jesus Christ of Latter-day Saints from 1835-1838 and 1839-1878.  He had received a special blessing and charge to take the gospel to the Holy Land, and before he left he had a vision of himself on the Mount of Olives.  This mission was realized in 1841-1842, when he traveled first to Europe and then Constantinople (now Istanbul) before sailing to the Holy Land, which was then part of the Ottoman Turkish Empire.

Arriving in the port of Jaffa, Elder Hyde made his way to Jerusalem, where he stayed for over a year and a half.  On the morning of October 24, 1841, he climbed the Mount of Olives.  There, with a view of the Old City of Jerusalem, he composed a special dedicatory prayer, which he then pronounced upon the land and its peoples.

While much of this prayer is often read with a focus on the gathering of Jews to this land, this aspect of the prayer can also be understood in the context of Hyde's time and from the scriptural perspective of the ultimate restoration of Israel in and through the millennial reign of Jesus Christ

Below Brother Harper goes on to share parts of a letter that Elder Hyde wrote to his wife, detailing some of his experience in Jerusalem:

The Church today and BYU as an education institution are not political and are completely neutral in Israeli-Palestinian issues.  I see them all as the children of Abraham with a claim to the promises, especially the spiritual promises, made to him and to his sons Ishmael and Isaac.  Furthermore, we understand that all the nations of the earth are blessed through the covenant that God made with Abraham, and so we recognize the interest of many people---Jews, Christians, and Muslims---to this special land and this Holy City.

While we were there, Andy Skinner shared a story of an experience that Elder Hyde had while still sailing to the Holy Land, which we felt illustrated the Lord's interest in all the people of this land:


I love Psalm 122:6, "Pray for the peace of Jerusalem: they shall prosper that love thee."  Daily I pray for this land, for this city, and for both of its peoples, each of whom I am coming to love more and more while living here.