You say Emmaus, I say Latrun

As noted in an earlier post this morning, Rachel and I started the day by going to the Orson Hyde Memorial Garden with the other faculty and some of their families.  Elaine, who had been home with Samuel, was nursing a bad cold, but by 11:00, we were ready for our day out.

Today we had on the agenda the Canada Park in Latrun and the churches commemorating the Visitation and the birth of John the Baptist in a suburb of Jerusalem called En Kerem.  Well, between our late start and Samuel's still low tolerance for historical site-seeing, the better part of virtue was to go to only the first of the two.  We will save En Kerem for next week when everyone is fresh and when we can better prepare by reading parts of Luke 1 as a family first. 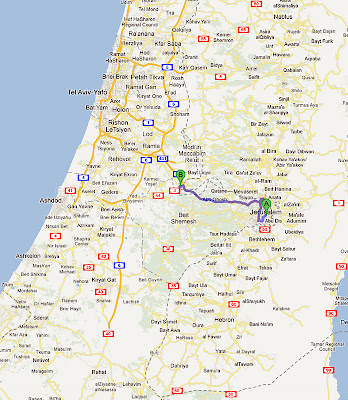 Latrun used to be a Jordanian salient protruding into Israel, a point that actually threatened the main road from Tel Aviv to Jerusalem.  So when the Israelis captured the area in 1967, the main Palestinian village of Imwas was raised and the area has since been converted into the Canada Park, so named because it was financed largely by the Jewish National Fund of Canada.

We were interested in it because the name Imwas preserves the earlier name of "Emmaus."  Actually, it is not likely that this was actually the biblical Emmaus, where the Risen Lord revealed himself to two disciples after having walked with them there from Jerusalem with their not knowing his identity (see Luke 24:13-35).  Two other sites closer to Jerusalem, Qaryet el-Enab and Qubeiba, both near the modern village of Abu Gosh, have better claim to be Emmaus.  But my Byzantine friends thought that this was the site, so I wanted to see it.


Actually it was interesting on its own, because before the Byzantines started to make pilgrimages there, it had been converted into the Roman city of Nicopolis, so there were a few interesting remains for us to look at, particularly an interesting water system. 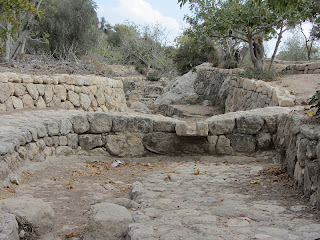 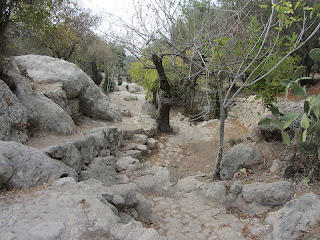 And the site is important strategically, sitting over the wide Ayalon Valley, which provided an important approach to Jerusalem.  As a result, even though the Crusaders thought that Qaryet el-Enab was Emmaus, they built a big castle below this site to control the valley.  Richard the Lion Hearted passed this way on his failed attempt to re-take Jerusalem up the valley.


Cannot say that Samuel had a great time today, but he put up with it . . . and there was progress from a surprising direction: Samuel decided he wanted to try out a few words on just about everyone he saw (see the entry for 10/23/2011 at the bottom of Samuel's page).