Yom Kippur, the Day of Atonement

[Note the hyperlinks in this entry to articles and even musical selections.  I hope you will enjoy them.]

Here in Israel, it is Erev Yom Kippur, or the Eve of the Day of Atonement, and already many Jewish Israelis are taking the day off and preparing for the most solemn day of the year.  A common greeting is tsom kal or "an easy fast," because Yom Kippur is when Jews celebrate a 25-hour fast as part of the biblical injunction "to afflict themselves" (Lev. 23:27) to show penitence as they seek to repent and be forgiven for that year's sins.

Yom Kippur is one of the few times in the year that secular (i.e., non-religious Jews) attend synagogue and observe religious restrictions that normally they do not (compare this to some casual American Christians who only go to church on Christmas and Easter).  This year Yom Kippur falls on the Sabbath, but even when it does not, it takes on the nature of a strict Sabbath, so there will be no driving or even television broadcasts when Yom Kippur eventually starts at sundown this evening.  In Jerusalem many roads are even blocked to enforce this stricture.

In rabbinic Judaism a beautiful tradition has developed about the relationship of Rosh Hashanah, Yom Kippur, and the days in between. Rosh Hashanah, now popularly the "Jewish New Year," is known in the Bible as "the Feast of Trumpets" from the blowing of the shofar horn. It calls people back to God and repentance, and a traditional saying, and song, says "On Rosh Hashanah it is written, on Yom Kippur it is sealed." The idea is that God decides at the beginning of each year the fate of every person, but this judgment is not sealed until Yom Kippur. As a result, the ten days in between the holidays are known as the Days of Awe, a period of introspection and repentance, as people figuratively try to change God's mind before Yom Kippur.

I took time in class this morning to review the biblical celebration of , acquaint my students a bit with contemporary Jewish practice, and then make some Christian connections.

Most of the biblical injunctions are found in Leviticus 16:1–34 and 23:26–32. While Israelites were bound to observe a strict sabbath, fast, and repent, most of the obligations of the Day of Atonement fell upon the high priest or kohen gadol, who needed to perform a complex series of sacrifices, culminating in his entry into the devir or Holy of Holies in the temple, where he completed atonement for the sanctuary, himself, and the people.  Other rituals included the selection of a "scape goat,"who figuratively bore the sins of Israel into the wilderness and the blessing of the people, invoking the name of YHWH aloud, which caused the people present in the temple courts to fall prostrate in worship.

Because all sacrifices were stopped with the destruction of the Jerusalem Temple by the Romans in A.D. 70, rabbinic Judaism has developed a complex set of prayer services in synagogue to take the place of the former rituals of the temple.  You can read about these aspects of Yom Kippur with this link.

Just before Yom Kippur begins at sunset, there is the chanting or singing of the stirring song Kol Nidre, an Aramaic text that begins by stating that "our vows will not be vows."  This was not a way for Jews to get out of their contracts and obligations but instead pointed back to bibilical prohibitions against excess oaths and injunctions that all vows made to the Lord must be kept.  The Kol Nidre, by this interpretation, is a plea for the Lord to forgive his people for not keeping their promises to him.

Many Jews will spend much of Yom Kippur in synagogue for the various services, often dressed in a white kittel to symbolize the purity that they are seeking.  The avodah service recounts the high priest's rituals in some detail.  Others involve selichot or prayers for forgiveness.

Perhaps one of the most beautiful songs identified with the High Holidays of Rosh Hashana and Yom Kippur is Avinu Malkeinu, "Our Father, Our King."

Early Christians made a direct correlation between the annual rituals of the Day of Atonement and the saving work of Jesus Christ.  The best New Testament text for this is Hebrews 8-10.  Comparing, and contrasting, what the high priest did each year to symbolically come into the presence of God by entering the Holy of Holies by means of the various sacrifices, the author of Hebrews wrote: "But Christ being come an high priest of good things to come, by a greater and more perfect tabernacle, not made with hands, that is to say, not of this building; Neither by the blood of goats and calves, but by his own blood he entered in once into the holy place, having obtained eternal redemption for us" (Hebrews 9:11–14) 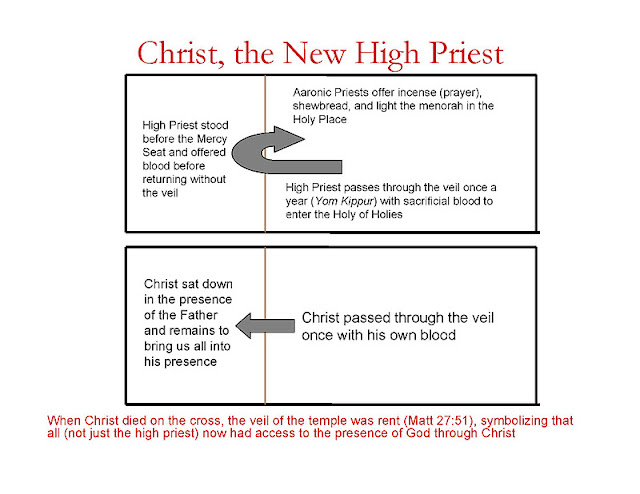 Whereas the Holy of Holies could only be entered once a year by the high priest, the veil of the temple was rent at the death of the Savior, thus symbolizing that the way to God’s presence was open to all through the blood of Christ (see also Matthew 27:51; see also D&C 19:15–23 and 45:3–8). See the chart above for an illustration of the roles of the Jewish high priest in the Jerusalem Temple and of Christ in the heavenly temple. The imagery can enrich one’s own temple experience today.

With this in mind, I am stirred by this passage of  Restoration scripture: "Listen to him who is the advocate with the Father, who is pleading your cause before him—Saying: Father, behold the suffering and death of him who did no sin, in whom thou wast well pleased; behold the blood of thy Son which was shed, the blood of him whom thou gavest that thyself might be glorified; Wherefore, Father, spare these my brethren that believe on my name, that they may come unto me and have everlasting life." (D&C 45:3-5)

For those of you who like beautiful music, I would recommend a two CD set by the Western Wind and Chorus called "The Birthday of the World: Music and Traditions of the High Holy Days." The first CD explains Rosh Hashanah traditions with a narrative alternating with fabulous singing and chanting. The second treats Yom Kippur. The only disconcerting element that might require some adjustment is hearing Leonard Nimoy as narrator!