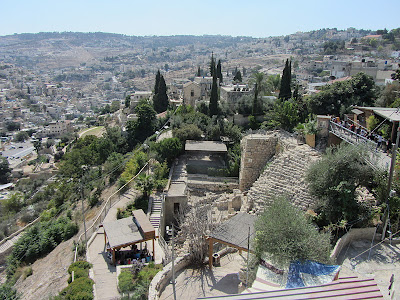 Yesterday Elaine and I joined Andy and Janet Skinner and my two colleagues, Steve Harper and Jared Ludlow, in a survey of the site of the City of David.  This was the Jebusite city, presumably on the site of Melchizedek's earlier Salem, or "City of Peace," that David took and made his capital, giving the fortress his own name.

For those somewhat familiar with current "Old City," the geography of biblical Jerusalem can be somewhat confusing.  The current Ottoman Turkish walls, completed in 1538 do NOT include areas of OT Jerusalem, such as the City of David, or NT Jerusalem such as the Upper City (known as "Mount Zion" in the Middle Ages) on the south, and they do contain some areas of that later Roman and Byzantine City, such as the current Christian and Muslim Quarters in the north, that were not within the walls in the biblical period. 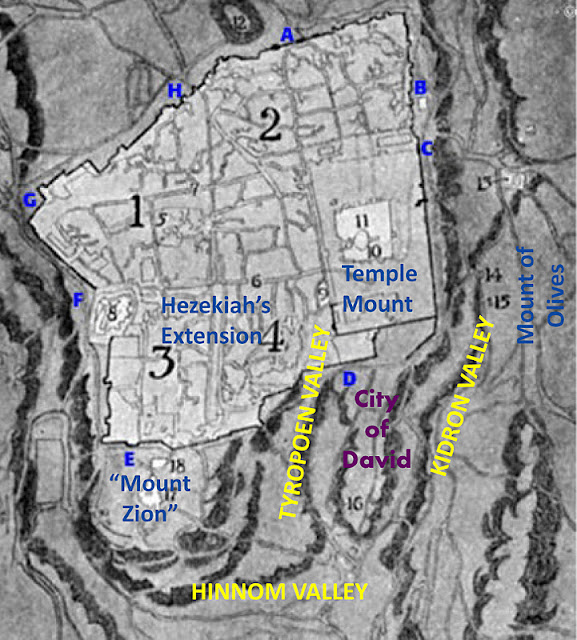 Pedant that I am, I have been reworking some maps that will hopefully help the pictures and video clips of this entry make sense.  The first is a public domain black and white map that I have doctored with geographic labels.  The most important thing to understand is the topography, especially the valleys and the hills, that defined ancient Jerusalem (and to a lesser extent still do today).  The earlier Canaanite city and the City of David itself were situated on a narrow "thumb" of land extending south from Mount Moriah, later known as the Temple Mount.  It had steep valleys on the other three sides---the Tyropoean Valley on the west, the Hinnom Valley on the south, and the Kidron Valley on the east.  The Kidron Valley continues northward, separating the Temple Mount from the Mount of Olives on the east.  Interestingly, the City of David and the slightly higher Mount Moriah to its north are NOT the highest of the hills of Jerusalem.  The Western Hill (appearing here labeled as "Hezekiah's Extension" and "Mount Zion") and the Mount of Olives to the east are much higher.  But the reason that the City of David was chosen for settlement first is because it is the only hill with a good, constant supply of water in the form of the Gihon Spring.

With those features in mind, you can now look at my video survey of the City of David: 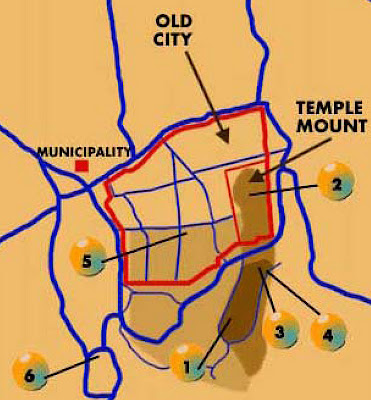 This other map, in shades of brown, might be easier to understand and follow.  The City of David, labeled 1 and appearing in dark brown, was the earliest Israelite capital., beginning in the tenth century B.C.  Solomon extended the fortifications onto Mount Moriah, labeled 2, where he built both the Temple and his own palaces.  Later Hezekiah extended the fortifications in the eighth century across the Tyropoean Valley to include much of the Western Hill (labeled 5), largely to accommodate refugees from the northern Kingdom of Israel, which had just fallen to the Assyrians (these may well have included the ancestors of Lehi, Laban, Ishmael, and Sariah).  Part of his preparations to face the Assyria menace was to bring the water of the Gihon Spring, labeled 4, within the walls and into a new pool in the the Tyropoean Valley that was now within the walls.  This is the famous Hezekiah's Tunnel. 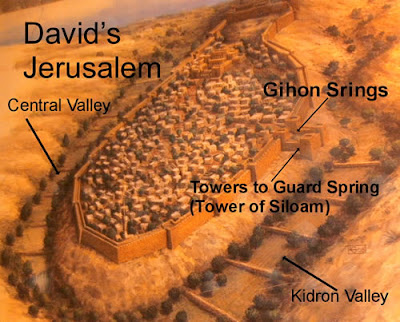 After surveying Bronze and Iron Age remains on the City of David, we went down to look at the Gihon Spring and walked through the Canaanite Tunnel that allowed water carriers to carry jugs up from it into the Bronze Age settlement here.  Hezekiah, as many of you known, had a complicated, winding tunnel built to channel the water around, and through, the City of David, to pour into the Pool of Siloam on the west side, which by that time he had brought within the city walls.  We did not walk through it this visit (we are doing that with the students next week, and once a semester is enough with my mild claustrophobia!), but we walked around on the surface to the excavation that has revealed the NT Pool of Siloam.

This pool is famous from the mention of it in John 8, where Jesus sends the man he is healing of blindness to wash.  The traditional Pool of Siloam is a Byzantine pool next to the church they had built to commemorate the miracle.  The actual New Testament pool was filled and covered with mud and what archaeologists call "overburden" by that point, but it has actually been partially excavated.  After the picture below, be sure to watch the video clip in which I describe the site a bit and then Andy Skinner gives an ad hoc lecture on the significance of visiting the pool during Sukkot, since the miracle took place during the Feast of Tabernacle. 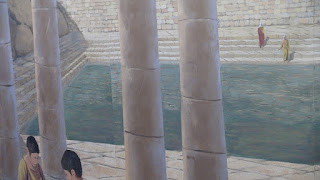 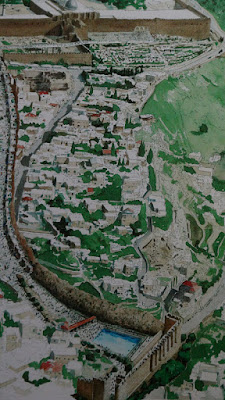 As mentioned by Andy in that clip, one of the features of the Second Temple observance of Sukkot was to draw water from the pool and then carry it in a priestly procession up to the Temple, where it was poured on the altar to accompany prayers for the next year's rains. 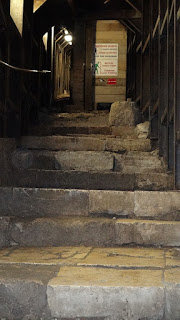 After the Pool of Siloam, part of the first century A.D. street that led up the Tyropoen Valley on the west side of the City of David has been excavated.  We walked along a stretch of it, which was exciting. Often we cannot really say that we "walked today where Jesus walked," because that archaeological layer is often many, many feat below the current ground level.  But Jesus had been at the Pool of Siloam, and he and his disciples had no doubt walked on this very street! THIS is why I really wanted to come to the Holy Land.

The last thing we did on this outing was to see some Herodian drains and sewers.  Josephus mentions that when the city fell to the Romans in A.D. 70, some of the defenders escaped by hiding in such drains and sewers.  One has been opened that leads all the way up west side of the City of David until it opens up just below the Dung Gate.    I think that this is a great clip, because it shows Elaine being a good sport as an amateur explorer!


We walked most of the way back to the Jerusalem Center, walking over the top of the City of David and then up the bottom of the Kidron Valley to the Garden of Gethsemane, where one of our vans picked us up to take us the rest of the way home.  On east side of the valley, on the slope of the Mount of Olives are many, many tombs, beginning from the second century B.C. until today.  On the other side, the massive Temple Mount looms over the valley.