Today is Erev Sukkot, or the Eve of Sukkot, which known in the KJV as the "Feast of Tabernacles" (Leviticus 23:33-34) or the "Feast of the Ingathering" (Exodus 23:16).  A sukkah (pl. sukkot) is a temporary shelter or booth that recalls how the Children of Israel lived in tents (that is, "tabernacles") during the wilderness wanderings.  But upon their entry into the Promised Land, it became on of the two great harvest festivals celebrated each year (the first, Shavuot, occurred 50 days after Passover and celebrated the harvest of the spring wheat crop and was also known as Pentecost or the Feast of the First Fruits).

As the autumn harvest festival, Sukkot is kind of like a week-long Thanksgiving. Preparations include selecting and purchasing "the four species" per Leviticus 23:40: "On the first day you shall take the fruit of majestic trees, branches of palm trees, boughs of leafy trees, and willows of the brook; and you shall rejoice before the LORD your God for seven days. (NRSV, the KJV lacks a reference to "the fruit").  The fruit was subsequently identified as the etrog or citron (a local citrus fruit), and the bough of a leafy tree has been defined as the myrtle.  The closed palm frond (the lulav) the myrtle branch, and the willow branch are thus joyously waved during the whole week of Sukkot as part of the command "to rejoice before the Lord your God for seven days." On the last day of the feast, the shaking of these four species is accompanied by Psalm 118:25, "Save now, I beseech thee, O LORD: O LORD, I beseech thee, send now prosperity." 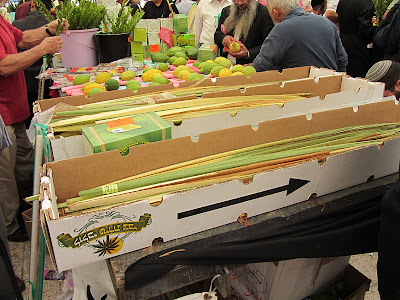 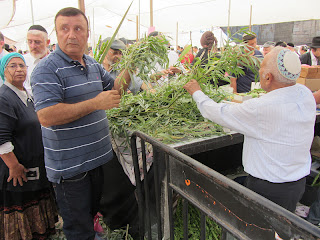 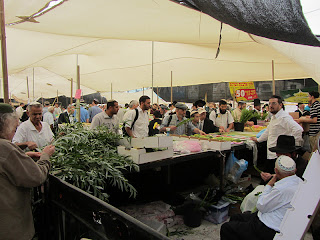 Today Elaine and I went with Jared Ludlow and Jen and Steve Harper and drove to the Mahane Yehuda Market, known simply as "the Shuk" (cf. Arabic Souq), where we saw many busily and carefully inspecting the four elements before they purchased them.  Nor surprisingly I could not resist, so I bought my first lulav and etrog to bring home to show the children.


Besides the Old Testament festival, the symbolism is significant to us as Christians and especially as Latter-day Saints.  Solomon dedicated his temple during Sukkot, and today at the dedication of LDS temples, white handkerchiefs are waved instead of palm branches, and the Hosanna Shout is based on Psalm 118 as well.  But most importantly, kings were often crowned at Sukkot, and so on Palm Sunday, when Jesus entered Jerusalem as King, he was welcomed with the waving of palm fronds.

Another part of preparing for Sukkot is the building of a family sukkah.   The simple command to "dwell in booths" (Leviticus 23:42-43) has been much elaborated in rabbinic Judaism.  To ensure that it is a temporary structure, it has been determined that it must be a truly temporary structure.  Its roof is usually made of fronds of trees or mats, which should provide more shade than sun but be so permeable that rain can fall through and three stars can be seen at night.  It must have a least three walls, but these too must be impermament.  Observant Jews will eat their meals, study, and often even sleep in their sukkah. 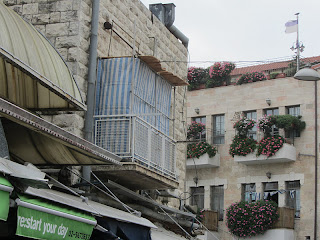 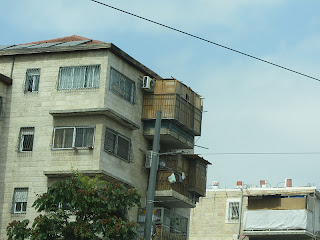 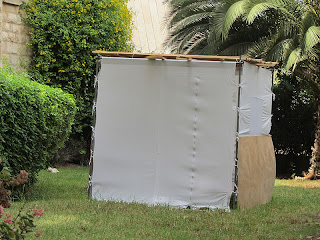 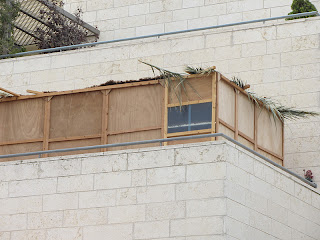 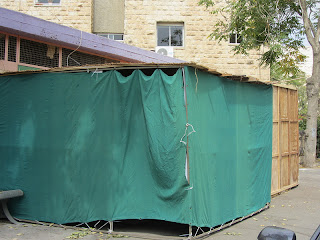 The Anglican School is off for all Jewish, Christian, and Muslim holidays.  As a result, starting tomorrow, the children are on holiday for a week.  So Elaine and I decided to surprise them by building our own sukkah on the patio of our apartment.  Modern Jews often decorate their sukkah with lights and festive decorations, so we let the children help us decorate our in similar fashion.  As we were rummaging through the Center's storerooms for materials, we found some sleeping bags and camping equipment, so there is a chance that Sam Man and I, and maybe Rachel, will be sleeping in it tonight! 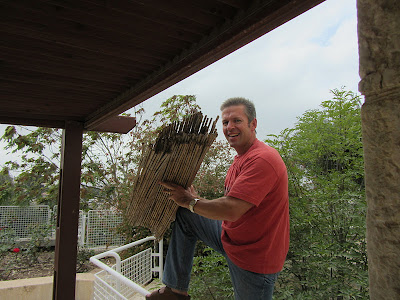 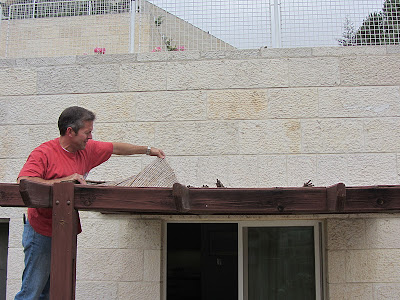 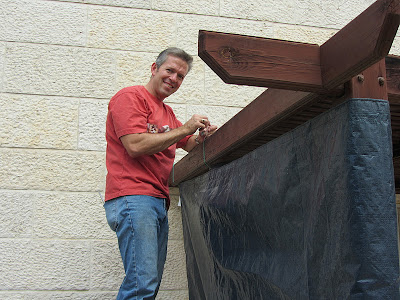 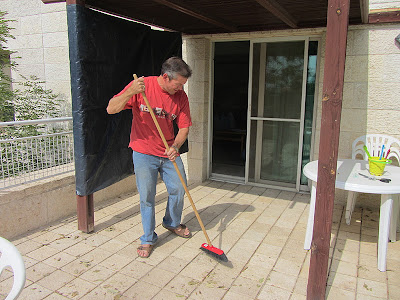 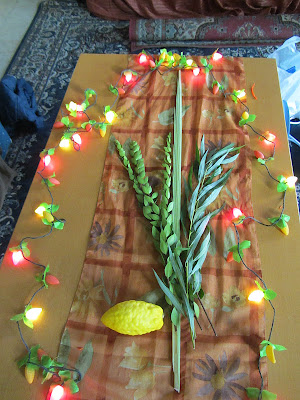 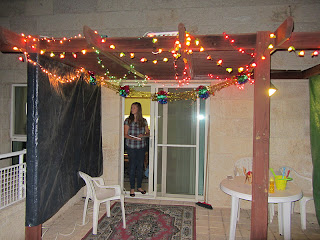 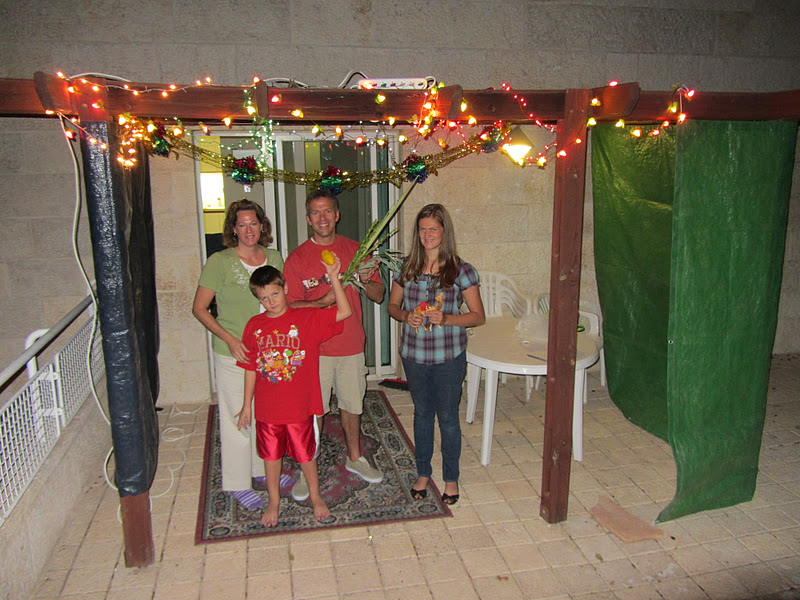 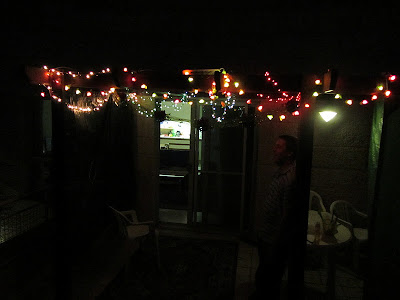 In the intertestamental period, there were further additions to Sukkot. Because agriculture in the Holy Land is so dependent upon the seasonal winter rains, the act of thanking the Lord for that year's bounty was combined with prayers for rain to ensure the next year's harvest. A water ritual developed wherein water was drawn from the Gihon Spring, the main, permanent water source for the city, which was then carried in procession up to the temple on the final, "great day of the feast."  In addition, great lamps were set up and lit in the temple courts each night of Sukkot.  These two features are important images used by Jesus in his great discourses in John 7-10.  For instance, in John 7:37-38 he says, "In the last day, that great day of the feast, Jesus stood and cried, saying, If any man thirst, let him come unto me, and drink.  He that believeth on me, as the scripture hath said, out of his belly shall flow rivers of living water." Likewise, in John 8:12 he says, "Then spake Jesus again unto them, saying, I am the light of the world: he that followeth me shall not walk in darkness, but shall have the light of life."