Date to the Jewish Quarter

The title to this posting might have caught your attention . . . it certainly was not the usual "Took the Students to the Garden Tomb" or "Field Trip to the Negev."  That is because now that we have more-or-less settled in to a routine with classes and work (me) and shopping and running the household (Elaine), we have decided to try to take the opportunity to see more things than we would normally with just the organized program activities.  Also, we have decided that we need to be more creative to find time to do things together since the usual weekly "date night" does not quite work here: most things shut down Friday evening for the Jewish Sabbath; we hold our church services and observe our own Sabbath Saturday; and while Sunday is our "free day," Sunday evening is a school night.

As a result, I starting this week I am trying to take an afternoon each week to take Elaine to some different sites so that we can examine and see them at a leisurely pace together.  Some of them are places I have been before but Elaine has not had a chance to see.  Others are on a long list of places that I have always wanted to visit.

Because I gave a midterm and then had a rather long faculty meeting, we did not have quite as much time to go out as I had hoped---we try to get back to the apartment by 3:00 when the children get home from school, because Samuel is not always happy if he comes home and Momma is not here (today, for instance, we did not make it back quite in time, and he left a note: "I came home and you were not here, so I am giving myself a chocolate chip cookie."). 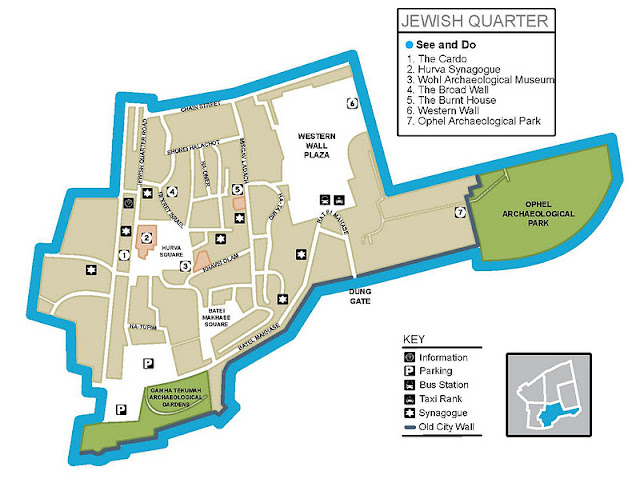 Today's date was to the Jewish Quarter of the Old City.  Elaine had not yet been to the Western Wall, what used to be called by some "the wailing wall" because for centuries it had been the site of Jewish mourning for the loss of the temple in A.D. 70.  Now the emphasis is less on mourning and simply seeing it as the last remaining contact with ancient holiness, a place where prayers most quickly ascend to the presence of the Lord. 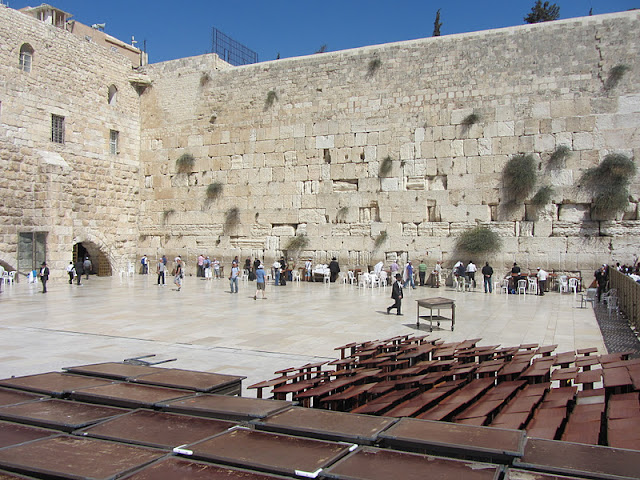 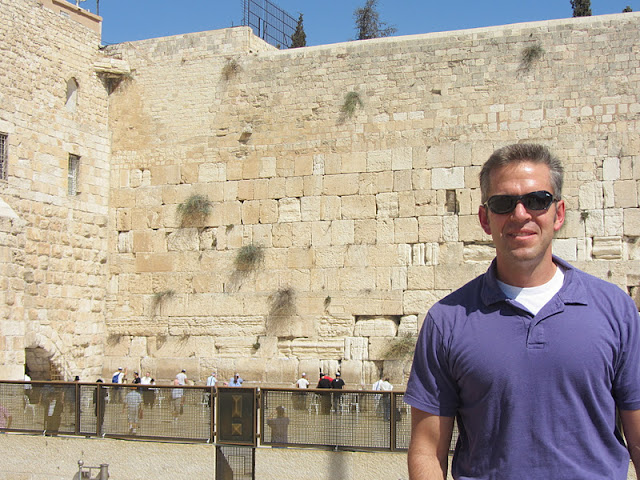 The wall is not from the temple proper but rather consists of the the remaining portions of the enormous retaining wall that Herod the Great built to hold up the temple platform.  Only the lower courses of stones, massive Herodian ashlars, are actually from the Second Temple, although some 21 courses lie below the level of today's street.  Above the big stones of Herod are many rows of later Byzantine stones, topped by courses of even smaller, more irregular Arab and Turkish stones.


After splitting up, Elaine to the women' side and me to the men's, to go up to the wall and experience the kind of worship that takes place there, we left the plaza and climbed the steps into today's Jewish Quarter proper.  In the first century, it lay across the deep Tyropoean Valley in what was then the Upper City.  When the Romans took Jerusalem in A.D. 70, this was the last part of the city to hold out. One of the small museums we visited was "The Burnt House," the remains of the home of a well-to-do priestly family that was destroyed when the Upper City fell. 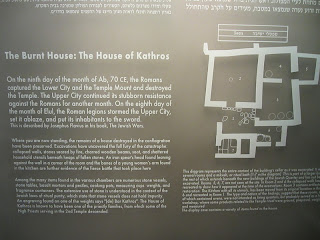 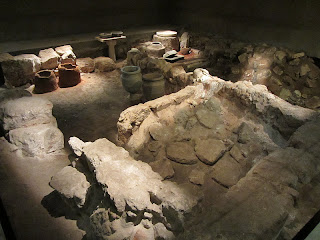 In the Turkish city and then under the British Mandate this was the part of the Old City where many Jews of different backgrounds lived, but during the 1948 War of Independence, the Israelis lost control of it to the Arab Legion of the Kingdom of Jordan.  The Jewish inhabitants were expelled, all but one of the Jewish synagogues were destroyed, and the quarter was left in ruins.  When the Israelis retook the Old City in the 1967 war, the quarter was restored, but first serious archaeological work was done throughout.  The restored areas feel considerable different than the rest of the Old City, mostly because they are not old but also because considerable money has been invested.

One of the great synagogues that was destroyed, the Hurva, has been rebuilt.  Tours of it are done only by appointment, so we will need to see the inside at a later date, but it is impressive from the outside.  It has added a white "Jewish dome" to the Old City's vista, which has the gold Dome of the Rock, the dark gray dome of the Al Aqsa Mosque, and the slate blue domes of the Church of the Holy Sepulchre.

While this is now the Jewish Quarter, some of the things revealed by the archaeological excavations since 1967 have been from the Byzantine Period, roughly A.D. 325-638.  When my students ask about my love for all things Byzantine, I simply say that it reflects three things I love most: Greek language and culture, Roman statecraft, and Christianity!  Byzantine Jerusalem was a development of the Roman city first built in A.D. 135 by the emperor Hadrian.  When Christianity became a legal, and then the official, religion of the empire, Jerusalem took on particular importance.  One of the Byzantine features prominent in the Jewish Quarter is the Cardo, the old Roman north-south road (kind of a Roman Center or Main Street).  With colonnades on both sides to shade the wide sidewalks and the shops on each side, it was, by ancient standards, a wide thoroughfare.  Today it lies significantly below the modern street level.  Some of it is an open archaeological site, some has become a covered modern shopping district. 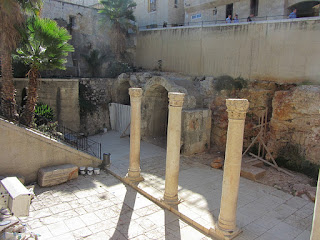 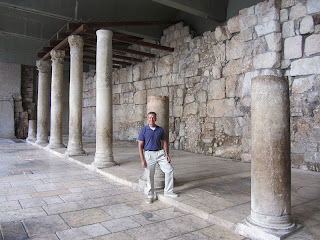 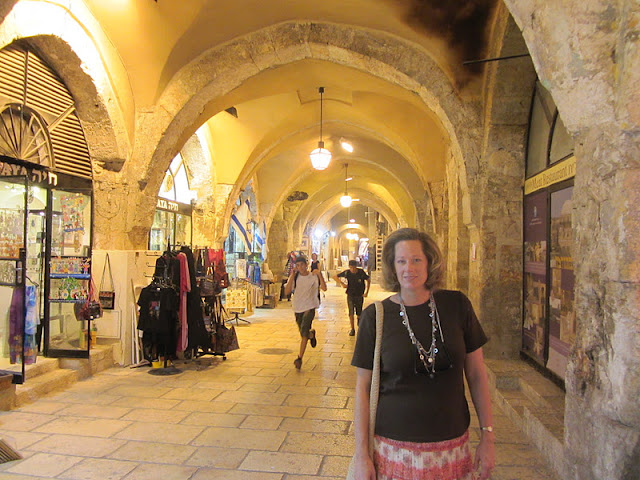 One of the archaeological sites off of the Cardo has revealed city walls from the First Temple Period (the ninth century B.C. or earlier) and the Hasmonean period (second century B.C.).  This might not be particularly interesting to many of you, but the following clip will reveal that this is just my type of thing!

For good measure, here are the footings of the defensive wall built in the eight century about the time of Hezekiah.  This was when Jerusalem first expanded from the eastern hill across the valley to the western hill in order to accommodate refugees from the northern kingdom of Israel, which had just fallen to the Assyrians.  This is possibly when people from Manasseh and Ephraim, such as the families of Lehi, Laban, Sariah, and Ishmael may have moved to Jerusalem 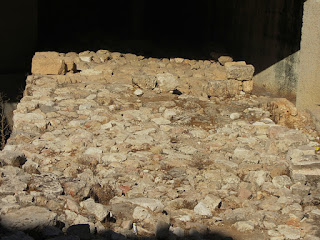 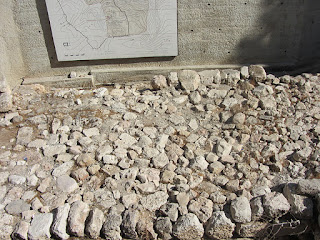 Elaine and I got lunch and then prowled around the Jewish Quarter a bit more, finally stumbling upon some Crusader ruins before hurrying back to the Center to see the kids. 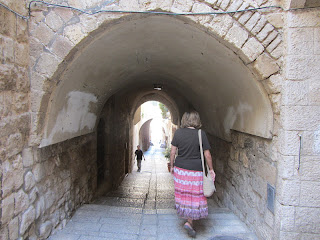 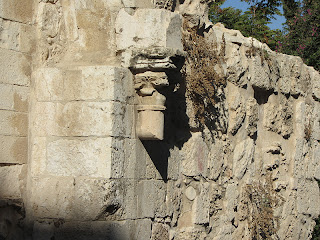 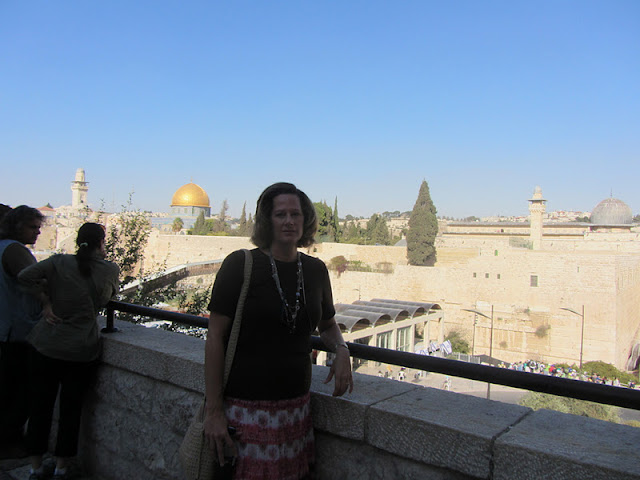 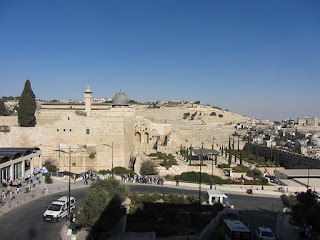