A Fill-in Day but a Great Day

Friday, September 2, was supposed to be the first full day of class, but with only 30 of our 82 students here, we needed to make some adjustments.  We are going to do our first real field trip Monday as planned, but since it is only a half day trip, we are going to do the first day of classes in the afternoon.  That will make a pretty full day for our students, but HOPEFULLY the rest of them will all be here by Sunday night.

But we could hardly leave 30 students chomping on the bit here in the center, so we planned a day with a few fill-in activities to keep them busy and excited about being here.  First, we took them to the Israel Museum. Like all museums, one can hardly do a good one in a single day (ah . . . but I have a year!), so I used the three and a half hours to go through the archaeological section with a train of students tagging along and asking questions on occasion.  It actually ended up being a good introduction to "the Land" as we call it, because it went through the different historical periods and helped them get some context on the peoples that have lived here or occupied this region: Neolithic, Canaanites, Egyptians, Israelites, Babylonians and Assyrians, Persians, Greeks, Romans, later Christian Romans (my beloved Byzantines), Arabs.  That did not even approach RECENT history: Crusaders, Arabs again, Turks, the British, and now the Israelis.

One of the highlights of the Israel Museum is the Shrine of the Book dedicated to the Dead Sea Scrolls.  Its noted white roof is shaped to be reminiscent of the top of one of the urns in which the scrolls were found, and streams of water are sprayed on it, recalling the dominant theme of purity found in many of those texts.  Across the plaza is a black monolith, the black and white recalling the theme of the eschatological conflict between the Sons of Darkness and the Sons of Light. 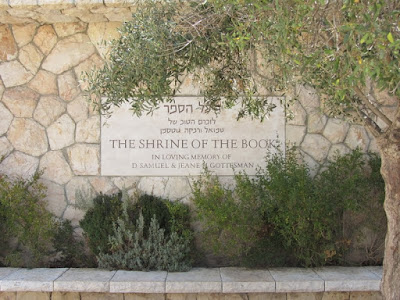 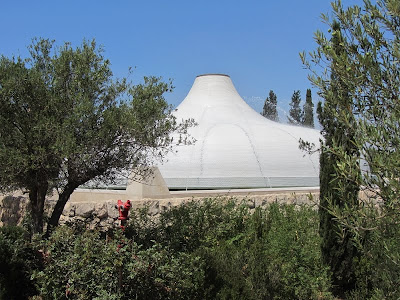 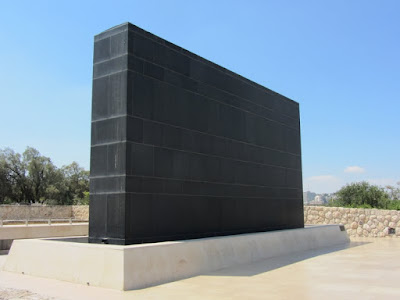 One enters from below, evoking the caves where the scrolls were found.  I encouraged the students to read ALL the introductory exhibits before actually entering the room where the scrolls were displayed, so they had a better sense of the provenance of these important early witnesses of the text of the Hebrew Bible and other important early texts. Also on display were leaves of the famous Aleppo Codex, a very early manuscript copy of the Hebrew Bible which is the earliest surviving witness of the Masoretic, or standard, form of the Hebrew Bible that is used today.

Also on the grounds of the Israel Museum is the famous model of the city of Jerusalem at the end of the Second Temple --- that is, close to the time of Christ (it actually includes the northern extension under Herod Agrippa I that would not have been there when Jesus was there).  I took DOZENS of pictures of the model, but will only give a few here. 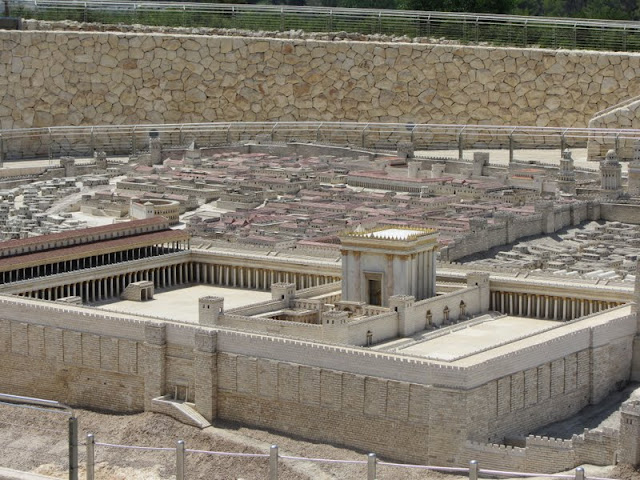 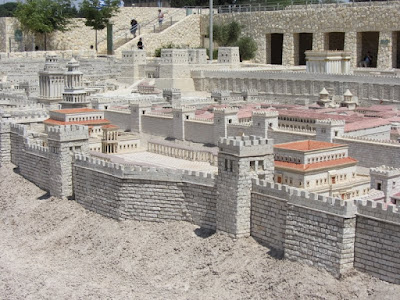 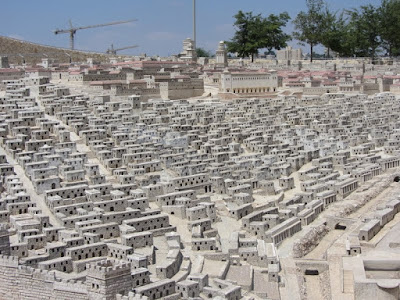 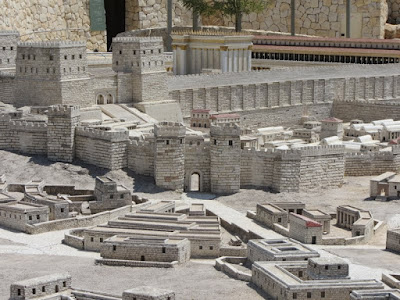 After eating a sack lunch on the grounds (Choir members, think the dreaded box lunch but substitute several pitas), we gave the students who were here that was hopefully a spiritual one to match all the historical experiences that they had been having: we took them to the Garden Tomb on Nablus Road just north of the Damascus Gate.  This is not the time to go into all of the historical and archaeological arguments for and against this site. In brief, for over 1,500 years Christians had venerated the site of the Holy Sepulchre as the site of the crucifixion and resurrection of Jesus.  But in 1882 or 1883, a British office named Charles Gordon identified a rocky outcropping outside of the Damascus Gate that he thought looked like a skull, which became known as "Gordon's Calvary." 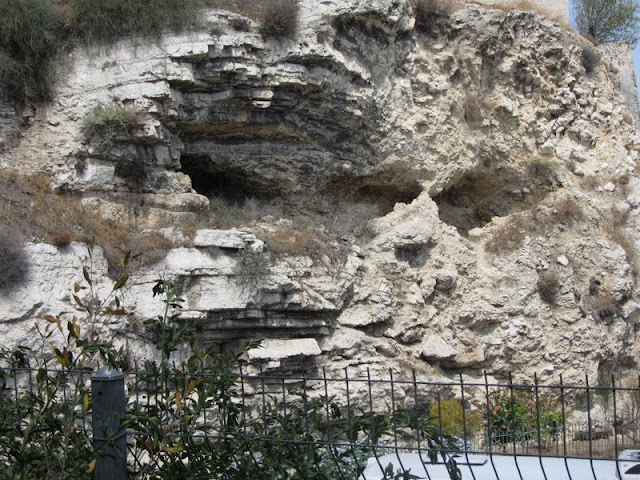 Nearby there were a number of tombs, and one of them seemed to fit the description of Jesus' tomb in the gospels. Gordon and others felt that this was a good Protestant alternative to the Holy Sepulchre, where the practices of the Eastern, Orthodox, and Catholic Christians seemed somewhat foreign.  The London Missionary Society secured the site and established a beautiful garden here.  There are actually archaeological problems with this site, but it is still preferred by some Protestants and many Latter-day Saints, the latter because Presidents Lee and Kimball were deeply moved by their visits here.

In the end, we commemorate the event of the resurrection more than the place of the resurrection, and I must say that I love this site, because in the beautiful stillness of its garden, I can better envision the sacred event that lies at the heart of my testimony. I was thrilled that I could have Rachel with me.  The mothers and children had been at the Anglican School that morning for an open house in advance of the first day of school Monday, but the center had arranged for a can to bring them to meet us at the Garden Tomb.  Sharing these events and places with my family has been one of my great hopes for this trip. 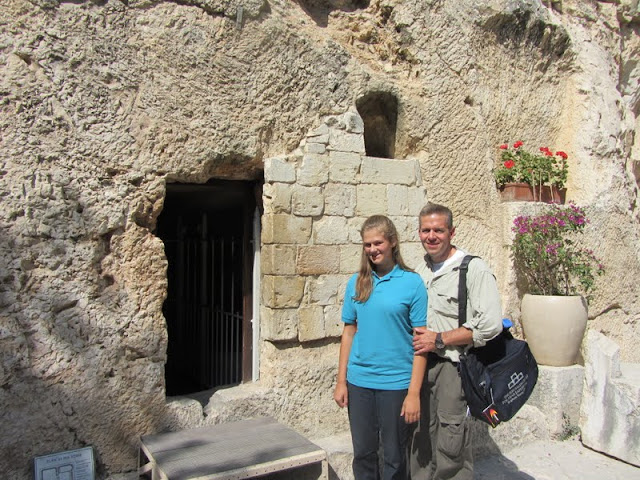 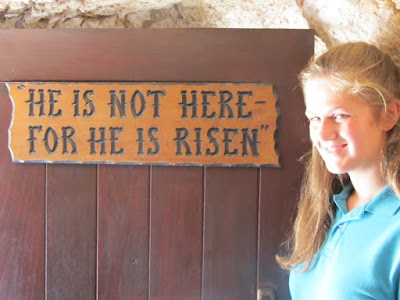 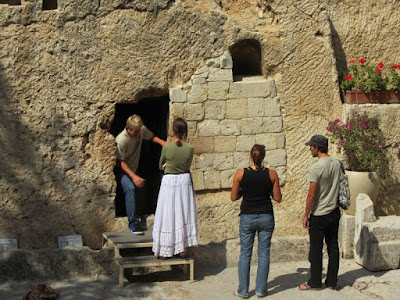 As we waited outside of the gate, Steve and I had our students sing "There Is a Green Hill Far Away" and "Upon the Cross of Calvary," because we wanted them to understand the pivotal role of the cross before we rejoiced in the miracle of the resurrection.  Singing on sites is a wonderful tradition of the BYU program, underscoring that this is not just a tour, it is a pilgrimage.

We were then taken on the standard tour of the site by a delightful retired Anglican priest named Mr. Atkins. After we had all had a turn to walk into the tomb and take whatever pictures we wanted, we retired to a small meeting area that had been provided, where I read much of John 20 to them.  We then sang "He Is Risen," "I Believe in Christ," and "I Know that My Redeemer lives."  We were all deeply moved, and the singing meant a lot to me.  While I miss singing with me "360 closest friends" in the Tabernacle, I realized that my musical mission continues as I sing with these great students.  They are perhaps not as musically accomplished or experienced, but they sing earnestly and with the spirit, so music continues to be an important avenue of bearing testimony for me. 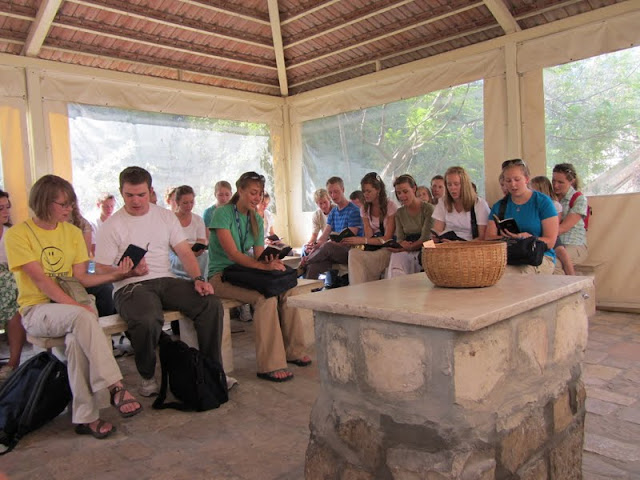 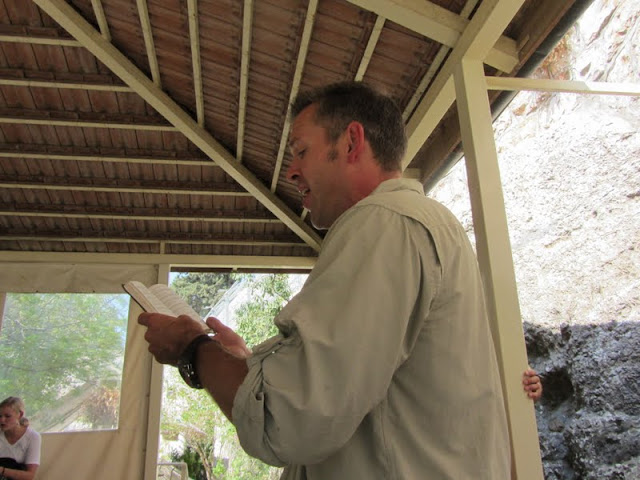