Ushering in the Sabbath at the Western Wall

This evening Rachel and I went with the other faculty, their families, and all the students down to the Kotel or Western Wall, which is the most famous, exposed section of the great retaining wall of the massive platform that Herod the Great built for his refurbished temple (Titus did such a good job in A.D. 70 at fulfilling the prophecy that "one stone would not be left on top of another" from Mark 13:2, that nothing from the actual temple itself has survived). Anyway, it is the most sacred spot for observant Jews since it was the closest thing to the Holy of Holies that has survived. 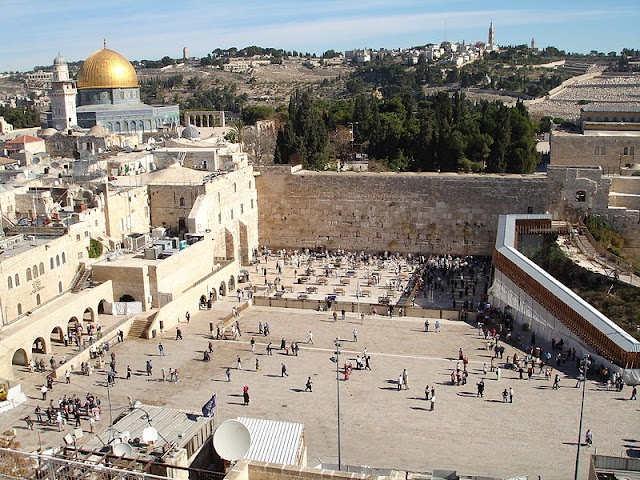 The reason that I have used a stock image from Wikimedia rather than one of my own is because we walked down at 5:45 so that we could be there when the Sabbath began at sunset, when no cameras or other electronic devices are allowed.  It was amazing to see such a diversity of worshipers, from the whole spectrum of observance and backgrounds, each with different costumes and traditions.

The plaza right before the wall is separated into a men's and women's section, so Rachel went with some of the students, while I led some of the male students into the worshiping area.  They held back, but I went right up to the wall to spend some private prayer time before going back to bring a few of the guys forward.

We then backed away from the wall itself to let other worshipers and and stood around an area where groups of soldiers and young men were singing and dancing to welcome the Sabbath.  We even joined in, clapping and making up the words the best we could.  Ran into the elders quorum president from the branch here, who is a physicist on sabbatical here but has been studying a lot of Hebrew on his own, and we went into the Kotel tunnel, which leads off of the plaza but follows the course of the Herodian wall, providing more prayer and reading space.

The center sent vans down to bring us home so that we did not need to walk through East Jerusalem in the dark.  As we drove by the temple platform, the Church of All Nations by Gethsemane, and other sights, all lit up, Rachel smiled and said she was glad to be here.
Posted by Eric D. Huntsman at 10:56 AM