This morning we took the 30 students that we have on their orientation walk.  This is the walking tour of Jerusalem from which I posted pictures the other day, but the students are not allowed to take cameras.  There will be plenty of time for them to do that: this is an exercise meant solely to familiarize them with the Old City and the nearby parts of East and West Jerusalem.

Rachel does not start school until Monday, so since she had the day free, she accompanied me again on the walk.  Although we did not plan it, we dressed just alike!

It was fun to have her as I took a group out for the first time solo.  She remembered some of the route as well as I, so she walked beside me and was my navigator in East Jerusalem north of the Old City (which I do not know as well) and even a time or two in the Old City.  When she was not walking along side of me, she was mixing with the female students and talking to them.  It made me very happy.

And a teacher is never as happy as when she or he is teaching, whether in front of a class or in the field.  Of course I needed to keep explanations to a minimum, but wow, to tell people about historic and sacred places, what more could I ask?

We had orientation meetings with the students in the afternoon, but then it was time to spend time with my family, especially Elaine and Samuel, who have not been able to do as much with me as Rachel.  Elaine said she needed to go to the magic "Super Deal" grocery store to get a cake mix for a certain someone who is turning 46 soon . . . being there made her happy.  It was better than the Arab store she went to the second day we were here or the crowded Jewish store while I was in Galilee . . . and it had so many things we had given up getting.  But the cost of living is mind boggling.  We cannot continue to spend over $200 for less than a week's worth of groceries.

But something better was to come.  She had found a website for a mall in southwestern Jerusalem, in an area called Manahat.  We could see it from the road, a big, multi-level, imposing structure with, wait for it, a PARKING GARAGE! (parking is usually an adventure in a city like this).  Despite the familiarity, there were some patent differences.  Security officers stopped us before we entered the parking garage, opened the doors and looked in the car and at our feet and then popped the trunk and checked any packages that might be there.  Then, after we had parked, we had to have our bags checked and walk through a metal detector, just to go in a mall!

But it was worth it, because this was Elaine's reaction the minute she stepped in the doors and looked down the mall at all the familiar looking stores: 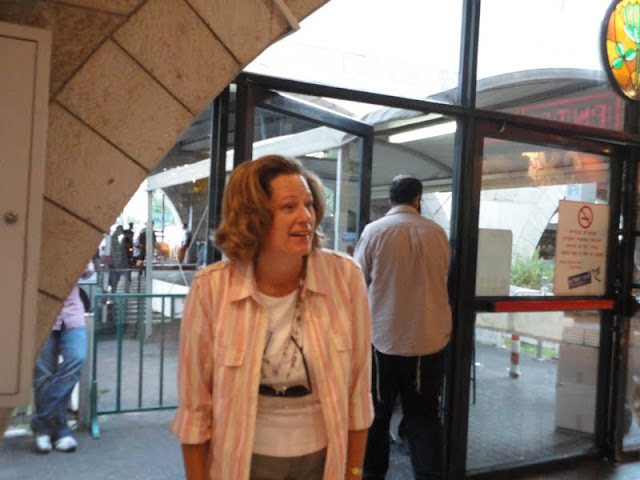 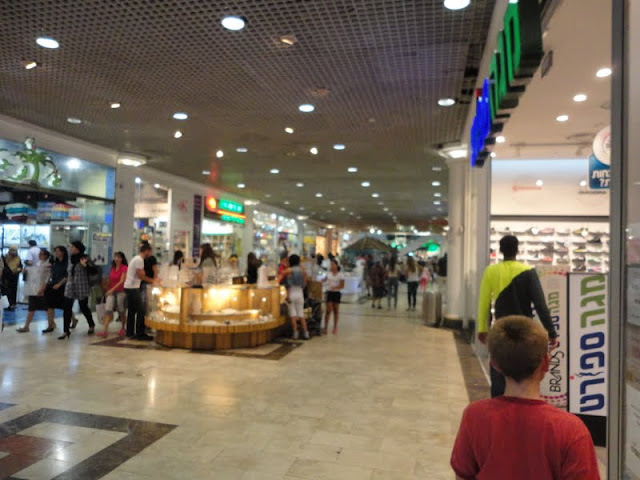 She said that she was literally about to cry.  Goodness.  I should get her out of the center and East Jerusalem more often!


Inside was a grocer store that made Super Deal pale by comparison, but there was something about needing to be a member (kind of like Costco or Sam's) to shop there, and I did not have the energy to try to figure it out or fumble around with clerks in broken English.  We looked at several other stores and then it was Samuel's turn, we had dinner at McDonald's!  But here is the kicker, four basic McDonald's meals cost 135 sheckles . . . or US$37.68.  We will not be doing that very often!