Today we had our last field trip, which in itself was a little bittersweet.  While I will be teaching two more groups before I return home in August (winter semester and then a combined spring/summer term), I have grown very close to this group.  Teaching at the Jerusalem Center is unique and wonderful enough because of the location and the material that I get to treat.  But having such in-depth, intimate association with such a fine group of young people has been like little else that I have experienced in my career.  Rather than teaching 4 or 5 classes that meet twice a week, I have taught my students 1-2 hours a day 4-5 days a week.  We live in the same facility, go on field trips together, occasionally eat together, and attend church together.  I will miss everyone of them

But I am putting them on their plane two days before they even leave, so back to today's outing, which was the second day of our "Last Week Walk."


We ended our walk yesterday at the Cenacle (from the Latin coenaculum, for "dinner room"), the traditional site of the Last Supper.   The gospels agree that after the Last Supper was over, Jesus and his disciples left the city and walked through the Kidron Valley, which with its tombs on the east side was in a real sense "the valley of shadow and death" that night (see Psalm 23).  They then came to the Garden of Gethsemane, which means "place of the olive press" on the slope of the Mount of Olives.

The Basilica of the Agony, also known as the Church of All Nations (because funds were raised in many countries for its construction), lies at a site that traditionally contained the "stone of the agony," where Jesus prayed and suffered.  Very old olive trees next to the church may include some whose root systems go back to the first century (Titus felled all the trees for miles around Jerusalem when he destroyed the city in A.D. 70), helping us recreated what the scene of the Lord's suffering might have been like.  A new garden, just across the lane, is where our students frequently spend personal contemplative time, but today we took them into the church to help them appreciate the faith of people since Byzantine times who have shared a basic understanding and faith of what happened that terrible night. 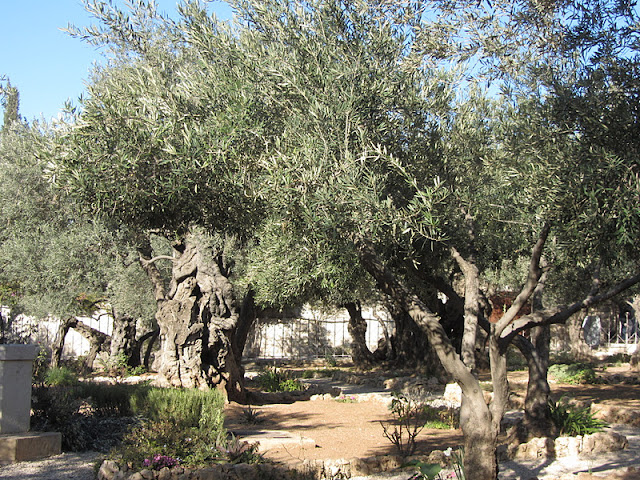 After spending time in the Basilica, we went across the lane to the newer garden, where we held our own devotional.  There Scott Walker read Luke 22:39–44, and talked about LDS insights into what happened at Gethsemane, reading from Alma 7 and D&C 19.  We then sang “Reverently and Meekly Now,” after which Sarah Meyers spoke to us about the betrayal and abandonment of Jesus. 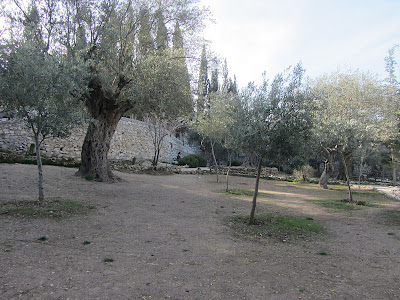 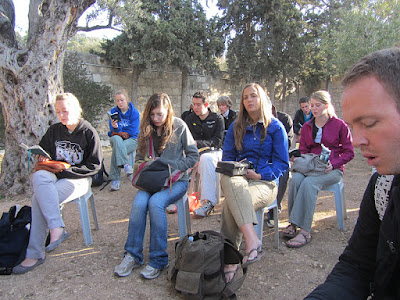 Vans picked us up after that and drove us south of the Old City, once again to Mount Zion.  Today our objective was St. Peter's in Gallicantu, "or St. Peter's of the Cock Crow," a church built on what may have been the palace of Caiaphas, the high priest who plotted against Jesus.  In the basement of these ruins, the Byzantines identified a cistern used as a pit-prison, as well as a holding room where captives were whipped and punished, both of which they included in a shrine church.


After walking through these areas, we went to the ruins outside of the modern church, next top which is a first century staircase that would have been one of the main ways that people ascended from the City of David and the Lower City to the Upper City where important figures like the high priest would have certainly lived.  In other words, after Jesus was betrayed and arrested in Gethsemane, these are the very steps that he may well have been brought up by his captors.  There Kate Preece read to us Mark 14:54, 66–72 and talked to us about Peter's denial, noting that while we cannot, and should not, judge the historical Peter, the literary character in the gospels can represent all of us who at times fall short in our discipleship, and yet Christ forgives and loves all of us nonetheless.  In that vein, we sang “Be Thou Humble.” 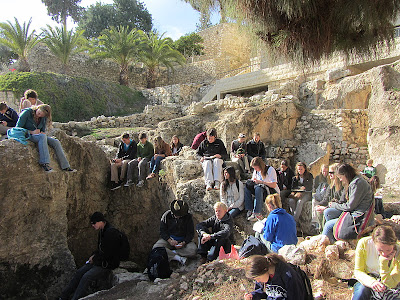 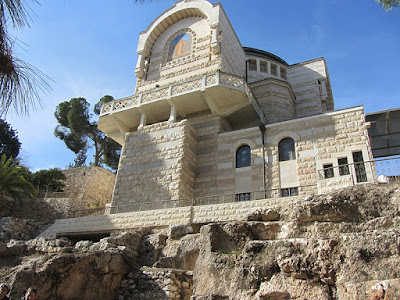 Before we let the grounds of St. Peter's in Gallicantu, we spent some time with the large model there of Jerusalem in the Byzantine period.  The students joke about my infatuation with all things Byzantine, but I have them trained on how to respond as to why I like that period and culture so much---it represents my three favorite things: they were Greek-speaking, Roman, and Christian!  They were not perfect, of course, and the way they treated the Jews was despicable, banning them from the city and leaving the Temple Mount desolate and a garbage dump (they thought the ruin was a mute testimony to the prophecies of Mark 13).  But look at the model, seeing the Church (churches, actually) of the Holy Sepulchre in its glory, and all the other commemorative churches was pretty neat. 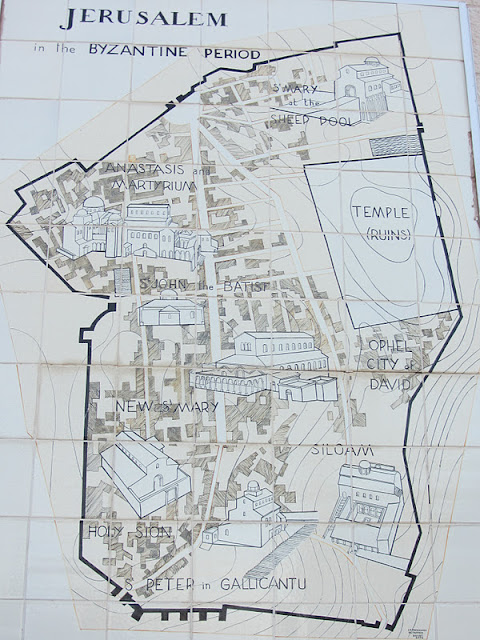 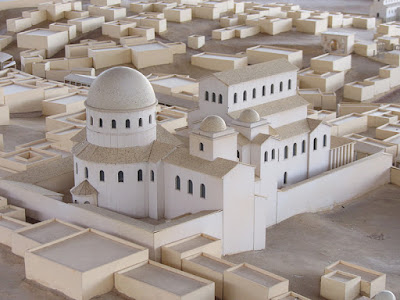 We then skirted around the south and east of the Old City, giving our students a last, close-up view of the Temple Mount and entered the Via Dolorosa, or "Way of Sorrows" through the Lion's Gate (also known as St. Stephen's Gate).  In the Church of the Flagellation Cameron McCord read Matthew 15:15–20 and we sang "O Savior, Thou Who Wearest a Crown."  I talked briefly after that about Jesus as "the Man of Sorrows" and how his example should help us understand and accept our own sorrows and trials in life: so often we pray to be like Jesus, but then when the hardships and pain that will make us more like him come, we pray for God to take them away! 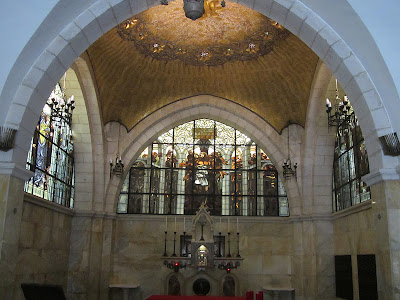 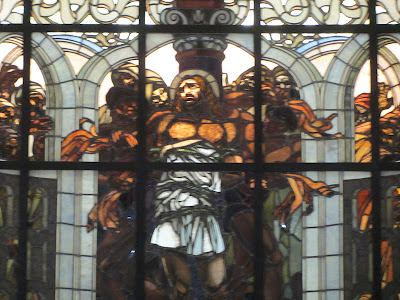 We then moved to the neighboring Church of the Condemnation, where Lauren Heyland read Mark 15:1–14 and talked about “The Problem of Culpability, or how blaming the Jewish leaders or the Romans for the condemnation of Jesus misses the point: as sinners we are all culpable and made his atoning death necessary. 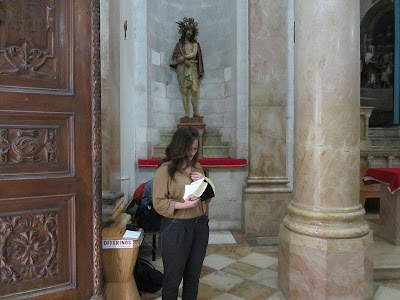 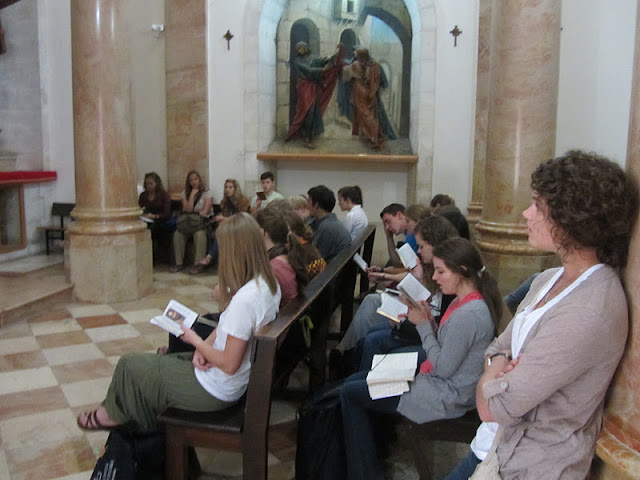 We then took a break from our Passion Week commemoration, spending some time at St. Anne's, dedicated to the mother of Mary but significant historically because of its position next to the remains of the ancient Pool of Bethesda.  In this church with its beautiful acoustics, student Rivkah Steele sang a beautiful solo of "O Savior, Thou Who Wearest a Crown" (she was in the other group, that had not sung that hymn with us in the Church of the Flagellation).  We then sang some sacrament hymns that were very moving.  After that the students sang some Christmas carols, which were fun to hear, though I sat back on that one, because it is not traditional to sing Christmas (as opposed to Advent) carols in Catholic churches until Christmas Eve. Going outside next to the Byzantine and Crusader ruins commemorating the healing of the man at the Pool of Bethesda, I taught about John 5 and the role of Jesus as healer and the healing power of his atonement.  We then ate our lunch on the grounds, visited with Father Michel of the White Fathers, and gave the students some free time. 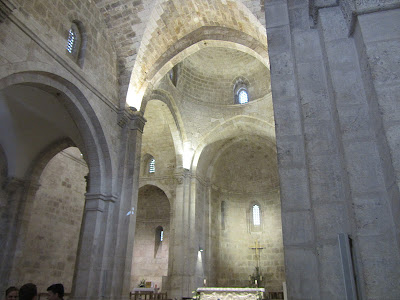 We then met the students at the Garden Tomb, the site preferred by some Protestants and many Latter-day Saints to commemorate the resurrection of Jesus Christ.  After the Richard Merion, the director the Garden Tomb and a good friend of our Center, greeted all of the students and shared a strong witness of Christ, we split into our respective classes for our final on-site devotional of the semester.  In my class, Kaleb Valdez read John 19:17–30 and spoke of the meaning and symbolism of the cross.  We then sang “Upon the Cross of Calvary” and “Behold the Great Redeemer Die.” 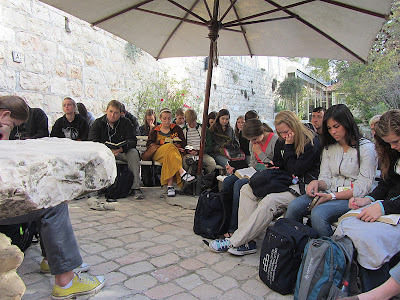 April Griffith then read John 20:1–2, 11–18 and shared a beautiful reflection on the resurrection, Mary Magdalene's experience at the tomb, and the model of her witness for everyone, but especially for women.  We sang “He Is Risen” and “Christ the Lord Is Risen Today.”  The students did not want to stop and sat there singing several other hymns, ending with "Come Thou Fount."  It was a fitting end to our semester. 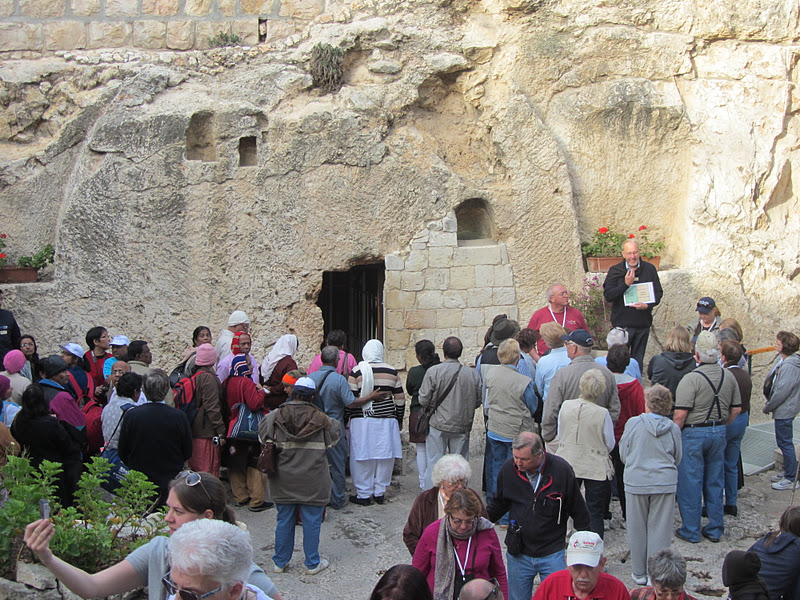