Today was the first of a two day experience retracing Jesus' steps and activities during the final week of his life.  For this experience, Steve Harper and I decided to do something a bit different with our field trips.  Rather than have us lecture as much on sites, spending a lot of time on history and archaeology, we decided to have the students much more involved, assigning certain of them scriptures to read in advance and then give a reflection or testimony of the meaning of what Jesus did then to us now.  As always, we sang a lot, but we prayed more often.  My intent was for this to be more "pilgrimage" than tour.  It allowed me to put into on-site practice much of what I recommended for Holy Week in my God So Loved the World: The Final Days of the Savior's Life.


We began in biblical Bethany, which is the modern Palestinian town of al-Eizariya on the other side of the Mount of Olives. Al-Euzariya comes from the name "Lazarus" (the Byzantines had called this Lazaraion). While Steve's group went ahead to the tomb, my group gathered in the garden, where Elyse Barnes read John 1:1–8 and Mark 14:1–9, after which she reflected on the woman (or the women) who anointed Jesus and her testimony.  We then went into the church, a later Franciscan structure built on the site of earlier Crusader and Byzantine shrines, where we sang "O Love the Glorifies the Son" and prayed. 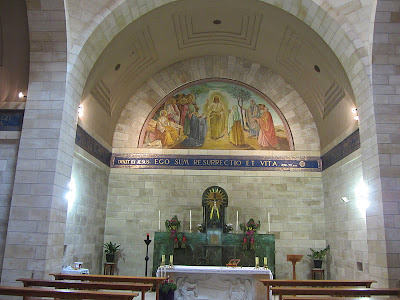 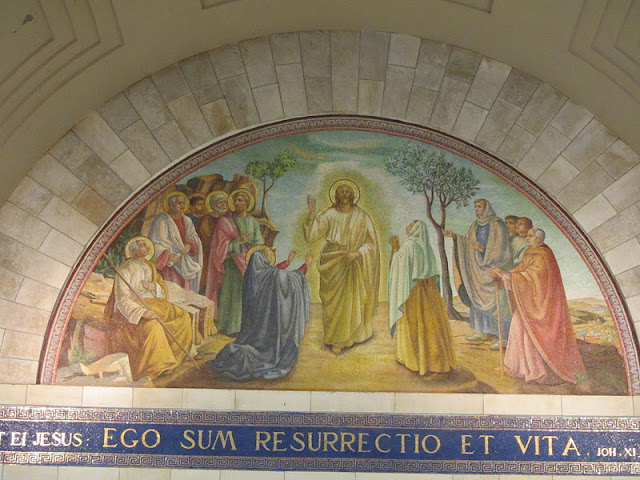 We then went into the traditional site of Lazarus' tomb.  Because the Muslims hold Isa, or Jesus, to be a great miracle worker, they have built a mosque on top of the site, but there is an entry beneath it.  It is unclear whether this was the actual tomb, but there are first century tombs in the hillside nearby, and we made a conscious choice this week to simply focus on how important events were commemorated at these sites rather than burdening the students with more archaeological debate.  We simply had Thomas Kelly read John 11:38-46 and bear his testimony. 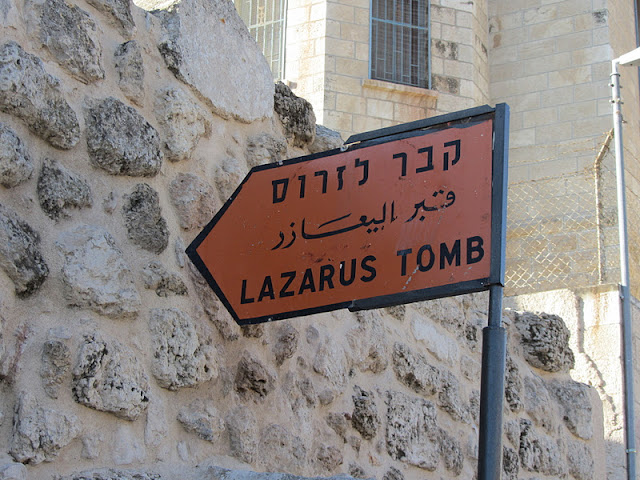 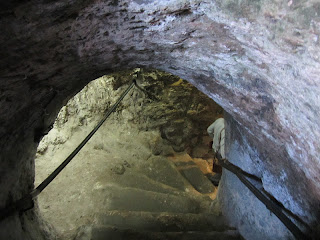 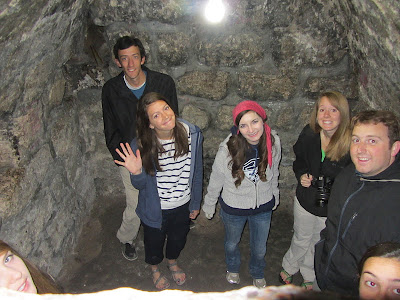 Bethany is less than a half-mile from the next site, Bethphage, where Jesus on the way to Jerusalem Palm Sunday mounted a donkey for his triumphal entry.  Today, however, it is a long drive because the Israeli Separation Wall cuts Bethany and Palestinian towns on the east slope from the Arab neighborhoods of East Jerusalem on the west side of the Mount of Olives. 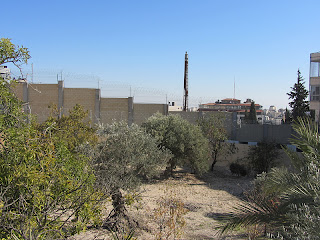 The current church in Bethphage, built in 1883, rests on a site where a Byzantine shrine commemorated where Martha came out from Bethany to meet Jesus.  In the twelfth century, however, the Crusaders built their own church here, which was the place that they began their Palm Sunday processions, which is still the case today.  In the church is a large, painted "mounting" stone, from which the Crusaders thought that Jesus mounted the donkey that he rode into Jerusalem.  Used to their massive chargers, they did not realize that a donkey was nothing like their large horses! 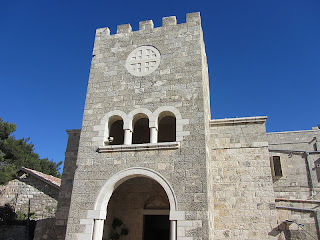 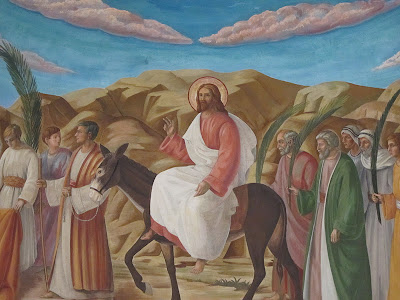 In the church, Adam Peterson read Mark 11:1-10 to us and talked to us about the importance of accepting Christ as our King.  We then sang the traditional Palm Sunday anthem, "All Glory, Laud, and Honor." 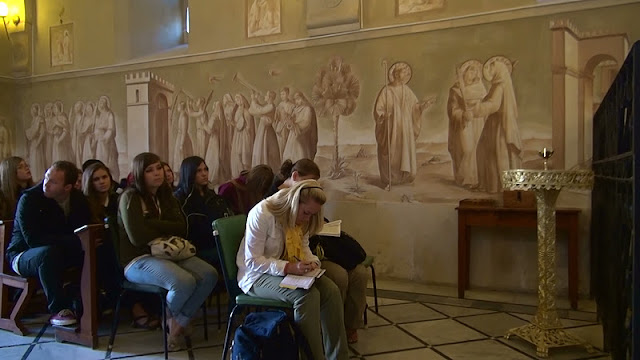 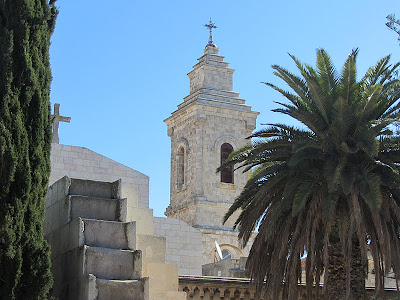 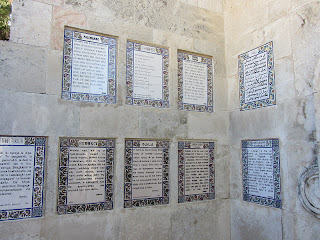 Kaitlyn Hull read to us Mark 11:20–26 on prayer and forgiveness, showing how it was later harmonized with Luke 10:38–11:4.  I then led the group in reciting the Lord's Prayer together, after which we sang “Prayer Is the Soul’s Sincere Desire.”

The site, however, was held as sacred from the earliest periods of Christianity.  Even before Helena, Constantine's mother, came to the Holy Land, local Christians held a cave here as the "Cave of the Mysteries" where the Risen Lord met with his apostles during the Forty Day Ministry, showing them by "infallible proofs" (Acts 1:4, Greek tekmēriois, for "sure signs or tokens") that he had indeed risen from dead and teaching them the secrets of the kingdom.  As a result, Helena built here a grand basilica, parallel to the ones she built in Bethlehem for the Nativity and in Jerusalem proper for the Holy Sepulchre. It was called Eleona, of "The Olive Grove." 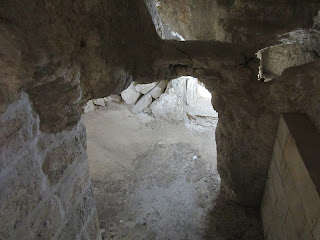 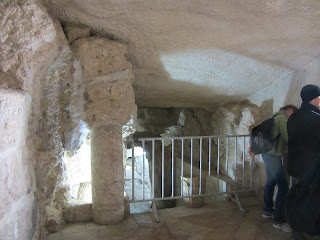 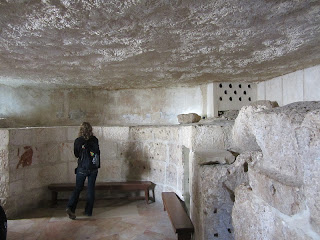 Our next stop was the lovely, tear-drop shaped church of Dominus Flevit, or "The Lord Wept."  Here Whitney Ricks read of the two times that Jesus is recorded to have stopped on the Mount of Olives and wept as he lamented over Jerusalem, first in Luke 19:41–44, at the beginning of his Jerusalem ministry, and then in Matthew 23:37–39, at its close. 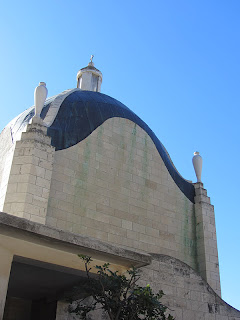 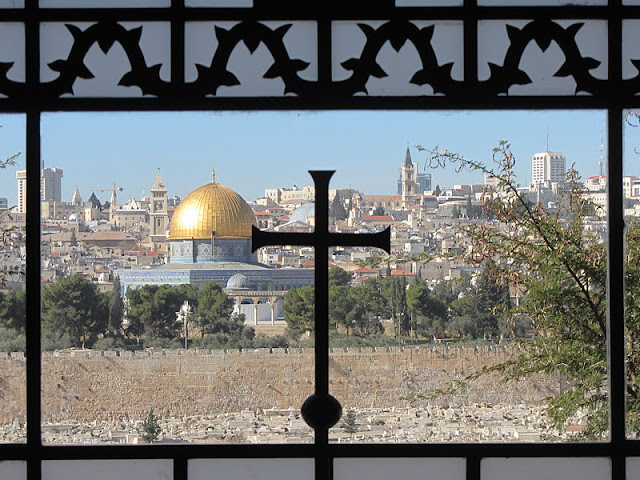 From Dominus Flevit we walked to the Orson Hyde Memorial Garden (see earlier blog posts on the Hyde Dedicatory Prayer and our consecrating oil here).  Our objective here was to revisit Jesus' Mount of Olives Discourse, wherein he prophesied the imminent fall of Jerusalem and the ultimate end of the world.  Jared Maxfield read Mark 13:1–8, 24–33 and Zechariah 14:1–4, after which we sang “Jehovah, Lord of Heaven and Earth.” 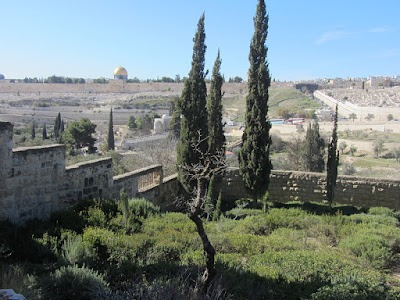 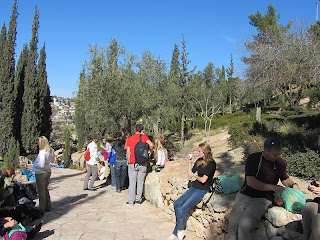 After eating our lunch in the Hyde Garden, we walked down to Gethsemane (which we will visit for a devotional tomorrow) to catch our bus, which drove us to Mount Zion, just south of the Old City.  Here is the traditional site of the Coenaculum (from the Latin for "dinner"), where the Last Supper is commemorated.  The building is a late, Crusader-era structure.  The upper room may well have been in a house on the Western Hill, so this site is as good as any. 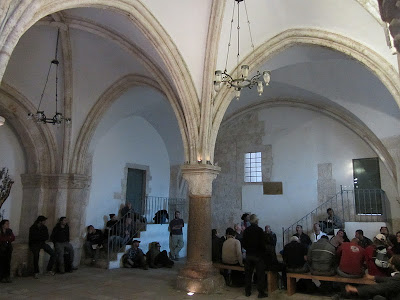 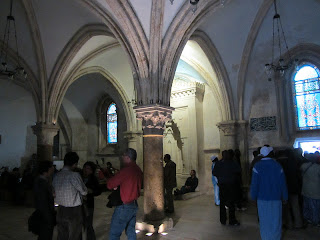 But the fact that we commemorate events and not places per se was clearly demonstrated by the devotional that we shared together.  Matty Crandall read Mark 14:22–25 and then the sacrament prayers from D&C 20.  After he shared his testimony of the importance of the sacrament, we sang "In Humility, Our Savior" and “While of These Emblems We Partake.” The acoustics were good there, and our students sang beautifully.  We were alone when we started, but during the course of the song, two different tour groups came in, listening appreciatively.  I was a bit disappointed that we had lost our "alone time" because I had hoped to give our students some quiet, reflective time.  But as we came to the end of the second song, I felt very impressed to pray.  So as we finished, I said, "Will you pray with me?" and offered a prayer of gratitude for the mercy and grace of Jesus, asking that we would always remember the feeling we had this afternoon each time we partake of the Lord's Supper.  When I said, "Amen," there was a chorus of enthusiastic amens from those who had come in.  That was the closest to preaching I am allowed in this land! 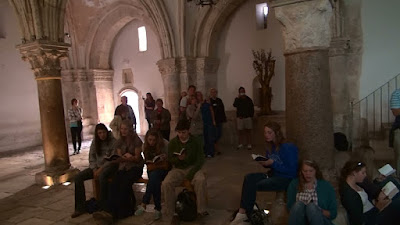 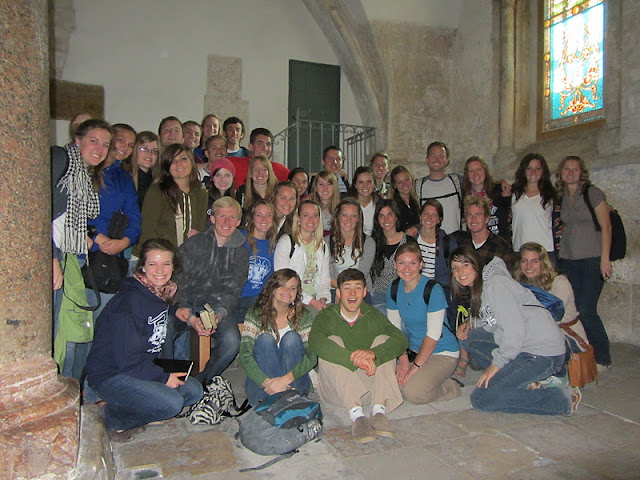