All right . . . because of the pressures of ending our semester---which comes with a boatload of grading and short field trips or other activities almost every day---after staying on top of my blog since August, I have at last fallen behind.  So this is going to be very quick post and over view of our 11/29 field trip to the Western Wall Tunnel, to be followed by a make-up post on yesterday's (11/30/11) Christian Jerusalem field trip.

The Western Wall or Kotel, once known as the "Wailing Wall," is the exposed portion of the Temple
Mount's western retaining wall that is reverenced by Jews as a connection with the lost Second Temple (a.k.a. Temple of Herod).  It appears in the diagram at the left as "Service Plaza" and is probably the best known portion of this piece of Herodian construction.

But when the Israelis took control of the Old City in 1967, after expanding the area available for worship, they also began excavations to explore the larger portion of the Western Wall that was not exposed.  This was necessary because a) over the centuries accumulated archaeological overburden had raised the ground level significantly, and b) during the Mameluk Period arches and vaults were actually built over what was left of the Tyropoean Valley so that it would be almost level with the Western Hill and the Temple Mount.  Houses and buildings were then built on top of these vaults; some of the vaults were used as storerooms and basements, but many of them were, over time, filled with dirt and debris.  Thus the largest course of the wall was buried or otherwise hidden from view.


The excavations created a tunnel, sometimes by simply excavating and connecting filled Mameluk vaults but at other times by digging a fresh passage alongside the Herodian Wall.  Walking through this tunnel allows one to see the entire stretch of the wall.

At one point, where the tunnel comes closest to where the Holy of Holies once was, a synagogue or prayer area has been established for those worshipers who want to get even closer than the the exposed, outdoor section of the Kotel allows.  The tunnel passes right by the women's section of this synagogue, while an area above the tunnel has been reserved for men.


Not long after the synagogue area, the tunnel also reveals a stretch of Herodian street.  That is because the original ground level rose as it moved northward.  Like the exposed stretch in the Davidson Archaeological Park (see the NT Jerusalem blog entry), this allows one to walk on a first century street, at least "walking where Jesus walked" rather than some 20-50 feet above it.

The tunnel also passes through a Hasmonean water channel before coming to the remains of the Strouthion Pools, that collected and stored water for the city's use in the first century. 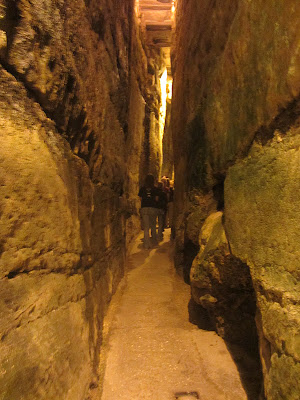 The Kotel Tunnel now exits onto the Via Dolorossa, which runs along the north side of the Temple Mount.  When this exit, deep in the Muslim Quarter, was opened it caused a lot of controversy.
Posted by Eric D. Huntsman at 8:51 AM