Earlier posts in this series: 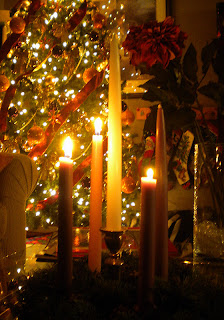 In contrast to the exuberance of the modern Christmas season, historically Advent was a solemn preparatory period devoted to meditating upon the coming king.  But because the message of the angels to the shepherds was one of “good tidings of great joy,” the third Sunday of Advent was devoted to the theme of Joy, reminding Christians that the Christmas message was, in fact, one of rejoicing.  In fact, the traditional name of this day was Gaudete Sunday, from the Latin word for “Rejoice!”

To contrast this Sunday from the others, some Advent wreaths use a pink or rose-colored candle rather than a royal purple one as in other weeks.  However, I also like to see in the color of this candle a solemn reminder of Christ’s coming Passion, the pink of the candle reminding us of the blood that he would shed, much as the red berries of the holly represent Christ’s blood and death even as its green leaves celebrate his everlasting life.

Once the first two purple candles and now the pink candles are lit, we start with scriptures that center on the joy of the gospel message.  But we end with one from the last night of Jesus’ mortal life that illustrates how joy often comes after sorrow:


Perhaps the most joyful scene in Luke before the actual birth of Jesus is the happy meeting of Mary and her relative Elizabeth.  Accordingly, I suggest that after discussing the joy of the Christmas season, families read the account of the Visitation, concluding with Mary’s inspired song, the Magnificat, from Luke 1:39–56.

See the video clip below for our visit to En Kerem, the traditional home of Zacharias and Elisabeth, where Mary visited Elisabeth and where she sang the Magnificat:

See "Mary and Elisabeth Rejoice Together," The Life of Christ Bible Videos.

“Joy to the World” is probably the most obvious choice for a carol to sing on the third Sunday of Advent, but I also like “The Holly and the Ivy” because of its combination of Christmas and Passion images.

Another beautiful song, which can be taken to celebrate Mary's role, is "Lo, How a Rose E'er Blooming."  Based upon Isaiah 11:1, the German poem that served as the text for this hauntingly beautiful carol was first published in 1599. In the Medieval Period, the family of David’s father, Jesse, was often portrayed as a rose tree. Thus, in this carol Isaiah’s prophecy of a rod coming forth from the stem of David’s father Jesse and a branch out of his root is portrayed as the blooming of a beautiful rose. For Catholics the rose was frequently seen as Mary, through whom Jesus came. With the Protestant Reformation, the rose was usually seen as Christ himself.

The familiar musical setting was arranged by Michael Praetorius in 1609, and Theodore Baker produced the most common English translation in 1894.  Regardless of the role one ascribes to Mary in the image of the song, her part in the coming forth of Jesus began with the Annunciation and was celebrated in the Magnificat, making this a beautiful song to associate with Luke 1.

This beautiful arrangement, featuring Renee Fleming, is one of the most beautiful I have heard (advance to 10:41 of the Tabernacle Choir broadcast linked here):

Lo, how a rose e’er blooming,
From tender stem hath sprung!
Of Jesse’s lineage coming,
As men of old have sung.
It came, a floweret bright,
Amid the cold of winter,
When half spent was the night.

Isaiah ‘twas foretold it,
The Rose I have in mind,
With Mary we behold it,
The Virgin Mother kind,
To show God’s love aright,
She bore to men a Saviour,
When halfspent was the night.

This Flower, whose fragrance tender
With sweetness fills the air,
Dispel with glorious splendor
The darkness everywhere.
True man, yet very God,
From Sin and death now save us,
And lightens every load.
Posted by Eric D. Huntsman at 12:52 PM