The title of this blog entry makes it sound like it is the subject of a sacrament talk or a church sermon . . . but in fact, it is actually a list of the places we took Mother and Lindsay today.  As yesterday, when I have them share their impressions or experiences as guest bloggers, their comments will be in blue (Mother) and purple (Lindsay) respectively.

First they attended LDS services with us in the Jerusalem Branch of the LDS Church, which meets here in the Jerusalem Center.  Sacrament meeting is held in the Upper Auditorium, which has unmatched views of the Old City. 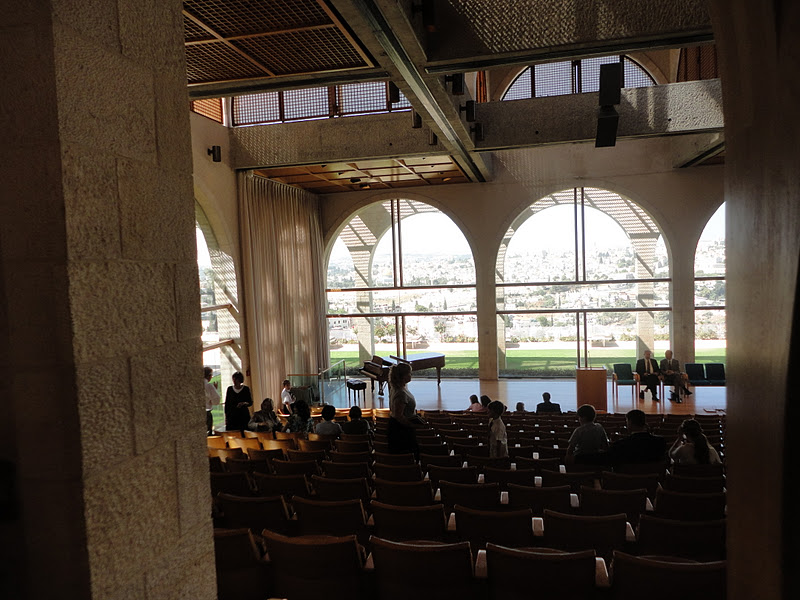 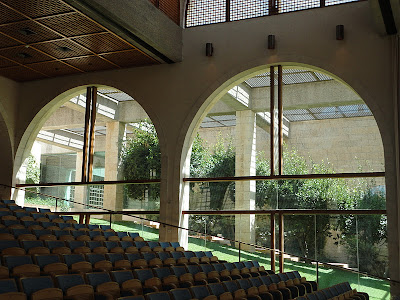 Mother on church in Jerusalem: As we sat in Sacrament meeting today, it was almost overwhelming to see the city of Jerusalem out the huge beautiful windows. My heart was so full as I took the sacrament to really remember the reason that I was renewing the covenants that I have made. Tears filled my eyes, it was wonderful to sit with part of my family and to share that special moment. I AM IN JERUSALEM, I can hardly believe it.  I am so thrilled. 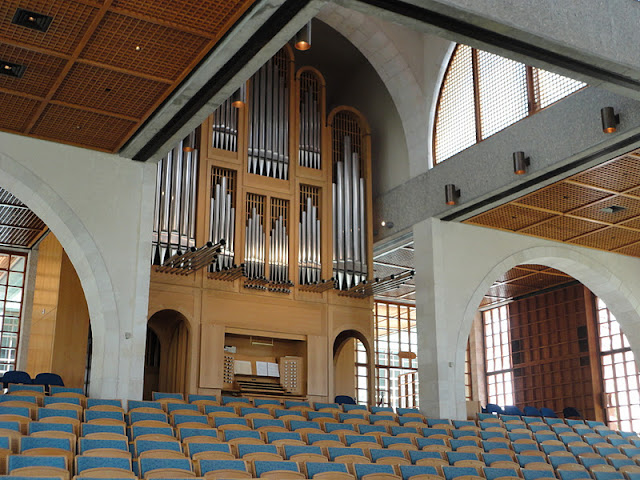 Lindsay on church in Jerusalem: All throughout church today, I just kept looking out at the city amazed at the view. It is hard to believe we are actually here in Jerusalem. It always in comforting to me that no matter where I go, previously throughout the United States and now across the ocean, that church services remain the same. The sacrament is constant, and although there may be slight differences in the order of things, it rings true that the Church is true no matter where you go.

This afternoon we checked out an SUV and drove the whole family down the Mount of Olives and miraculously found a good parking place on Jericho Road near the Basilica of the Agony.  I have previously posted on the history of this church and its neighboring olive gardens when I took the students there on their Last Week Walk (also here when I took Elaine and the children), but taking my own family here was a wonderful experience in itself.  First we looked at the very old olive trees right next to the church.  Then we went into the church, which Samuel announced "was the quietest church of all."  That touched me, because it meant that he was feeling something.  He wanted to go right up to the Stone of the Agony and touch it two different times, so we knelt there together and talked about Jesus praying for us at that stone or one very much like it nearby. 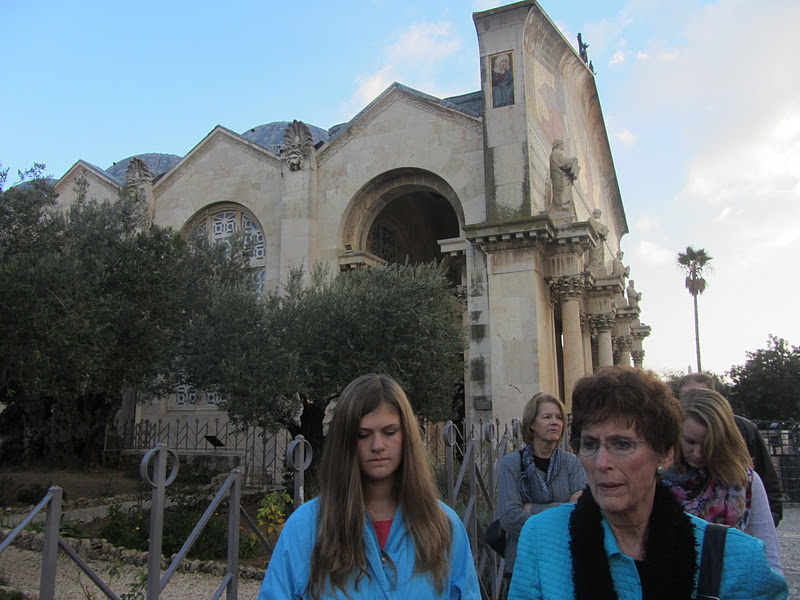 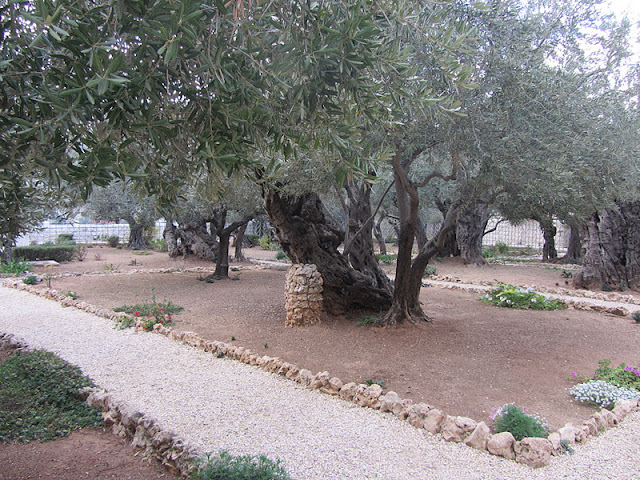 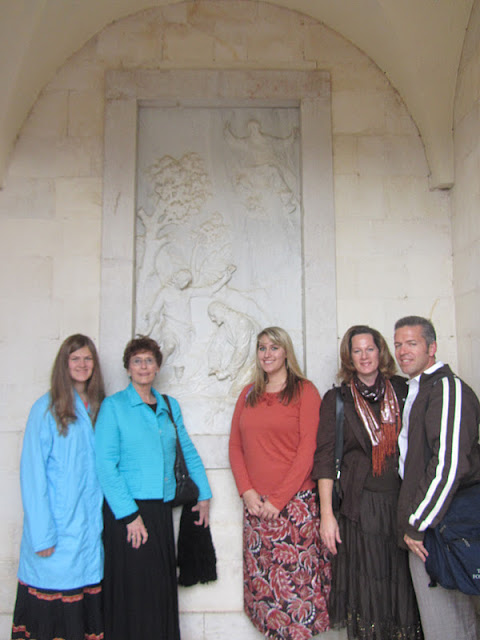 We then went to the closed, private garden just across the lane al-Shaykh.  We had met up with one of my students from last semester, Suzannah Butler, and her family, and they joined us for a little devotional.  It is different doing this with just a handful of people as opposed to a student group of 41, but I realized that this is the first, and probably the only time, Mother and Lindsay will be here, and I wanted them to have the same kind of experience.  So I read to them from Matthew 26:36-44 and Luke 22:39-46, after which Elaine read Mosiah 3:7 and Brother Butler read D&C 19:16-19.  We then sang "Reverently and Meekly Now" and Elaine offered a lovely prayer. 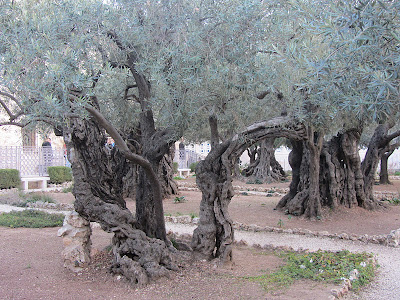 Mother on Gethsemane:  What feelings filled my heart as I looked at the gnarled, twisted old olive trees in the Garden of Gethsemane To think of Christ's suffering and what the Atonement really means was such a spiritual experience. We were able to go across the street to the Private Garden to sit and contemplate the happenings in the Garden so long ago.  We sat and read the scriptures and sang some beautiful hymns. The feelings of peace and understanding and feeling the Spirit just filled my soul. While we were there, a student and her parents asked if they could be with us, and it was very special to share that moment with them.  This was such a highlight of the trip so far. I am so blessed. 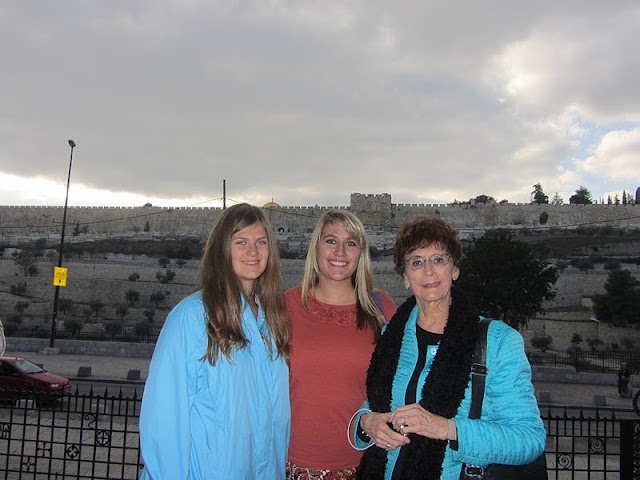 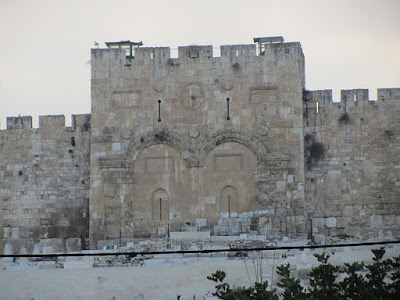 Lindsay on Gethsemane: Gethsemane was an very unique experience. I have been to multiple church history sites throughout the U.S., but being in the Holy Land brings a whole new meaning to the Atonement. I enjoyed being in the church and feeling the spirit, but to me, the most meaningful part was when we were able to go across the street to the Private Garden. I have been looking forward to this trip for several months now, and to sit in the garden and read the scriptures and sing songs just brought overwhelming peace and joy.

One thing I found interesting as well was when we first arrived to the Garden, the man at the gate knew immediately that we were Mormon and somehow, it just brought a feeling of calmness all throughout the Garden while we were there. Being in the Garden is more incredible than I could have ever imagined.

After that we drove to the Garden Tomb (posted on here and here).  How I thought I was going to find Parking on Nablus Road, I do not know . . . only after-the-fact did the Ludlows tell me about a parking lot not too far away.  But in the desperation of the moment, I had everyone jump out.  Elaine, who has been there before, agreed to drive the SUV back to the Center, taking Samuel, who had reached his fill of sites, home with her. 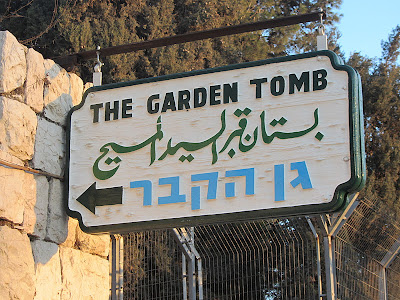 The people at the Garden Tomb Association are always lovely to us.  They recognized us as being from the Jerusalem Center right away.  Rather than join a larger group for the formal tour, Rachel and I took Mom and Lindsay around the site, describing Gordon's Calvary, the history of the garden, and the Tomb itself.  But rather than get distracted by competing archaeological and confessional claims, we allowed ourselves to think about the events that these sites commemorate, and I think that they moved Mom and Lindsay.  They still do, even after having been there several times. 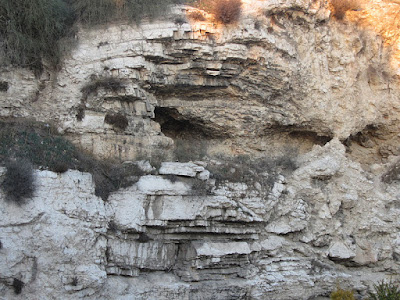 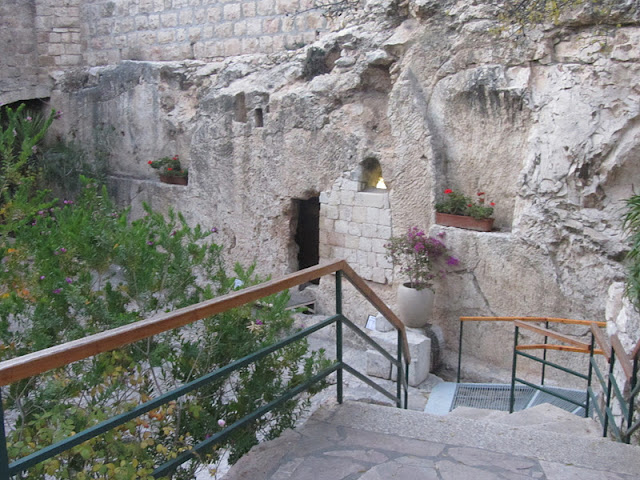 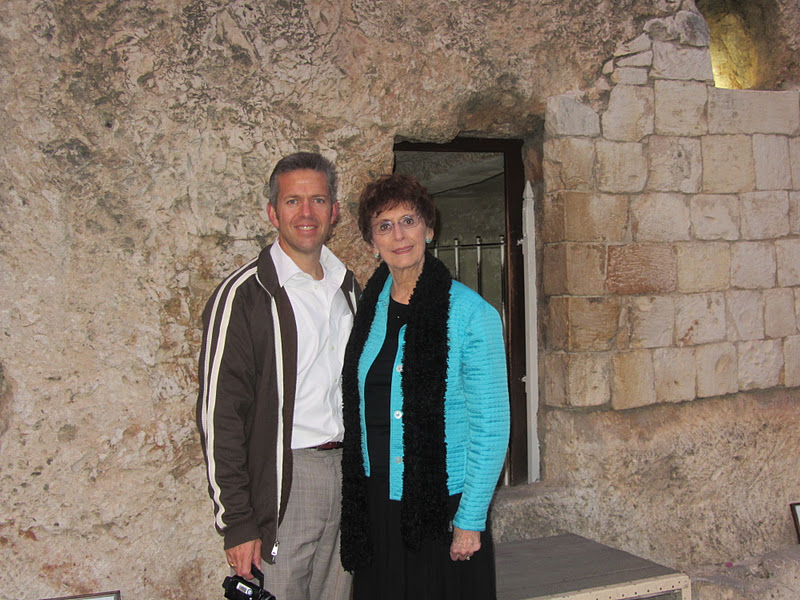 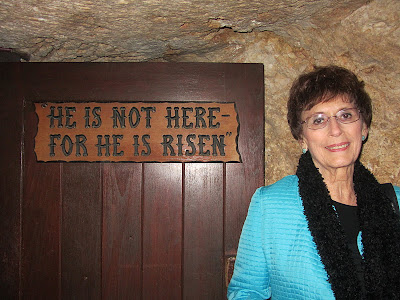 Mother on Calvary and the Garden Tomb: Just when I thought that nothing could move me as much as the Garden of Gethsemane had, we came to Calvary.  As we looked at the "place of the skul,l" we could imagine the crucifixion and the further agony and suffering of our Lord.  That feeling of sorrow was removed as we went through the beautiful garden to the Garden Tomb. Immediately tears gathered in my eyes as the realization of the reality of the resurrection bore witness to me that it was true.  Even though I have always known and believed in it, what it was like to be in that place as we read the familiar scriptural and sang the hymns "He Is Risen" and "Christ The Lord Is Risen Today!" The Spirit was strong and beautiful. My testimony of the Atonement and Resurrection  has been strengthened and made even stronger. He is risen, it is true.


Lindsay on Calvary and the Garden Tomb: Once again, one of the most meaningful things we did here was sing. Singing hymns always brings the spirit and I love it. We sang one of my favorite hymns as well, "He Is Risen." This made it so much more real when we were able to go in to the actual tomb. All of these sites just bring the scriptures and the events of the Atonement to life for me.

Since Elaine had driven our ride home, we called for a cab and spent some time waiting on Nablus Street as the sun set and it got darker.  That gave Mom and Lindsay a, um, different cultural experience standing there in East Jerusalem.  But we got home soon enough, having had a full and spiritual sabbath.


Lindsay on the realities of real Jerusalem life: I loved waiting on the streets of East Jerusalem, whether it was safe or not, because it just added to the whole experience of being in a foreign country for the first time. It really didn't seem odd to me at first until I saw the police get out of their cars with AK47's strapped to their shoulders! That is NOT something that you see in the States, and it made me realize how much in turmoil this part of the world really is. I also love, in some sarcastic sense, the driving and traffic here because people just park wherever they want and have no patience. It is putting your life in the hands of foreigners anytime you get in the car! What a rush!
Posted by Eric D. Huntsman at 12:47 PM