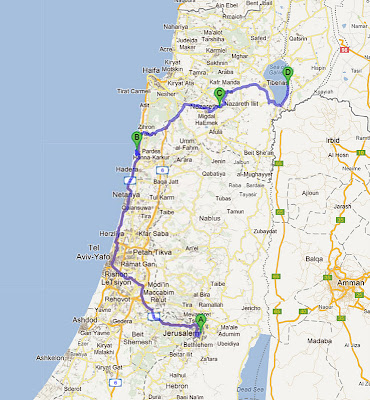 It is going to be hard to make up blog entries for the last three and a half days, so I will probably keep summaries and explanations short, referencing and linking earlier posts when possible.  I will start each day's entry with a map to allow readers see the territory we covered and to better picture where each site was located.  On our first day, for instance, we left Jerusalem in a rented car soon after breakfast and drove northwest to Caesarea Maritima.  From there we went to Nazareth, and after that we continued on to En Gev, a kibbutz on the eastern shore of the Sea of Galilee that operates a "holiday village," where we stayed the first two nights.

Caesarea was the port and capital that Herod the Great built on the coast. It was located on the earlier Phoenecian seaport of Strato's Tower, but Herod built a whole new artificial tower and filled his new city, peopled mostly by Greek-speaking Gentiles, with all of the amenities of a Roman city of the day (see towards the end of this earlier post).  Later, after Judea and Samaria were converted into a Roman province, the Roman governor had his headquarters here, so this is where Paul was brought to be tried before Felix and then Festus.

The first part of Caesarea that we looked at was the theater at the south end of the site.  This was the first time that either Mother or Lindsay, or perhaps even Elaine, had been in a Roman theater.  It was the first time for Samuel, too, so we occupied him by encouraging him to explore "secret passages."  Rachel was not with us for this phase of the northern trip, because she had gone ahead to Galilee as part of a district youth conference. 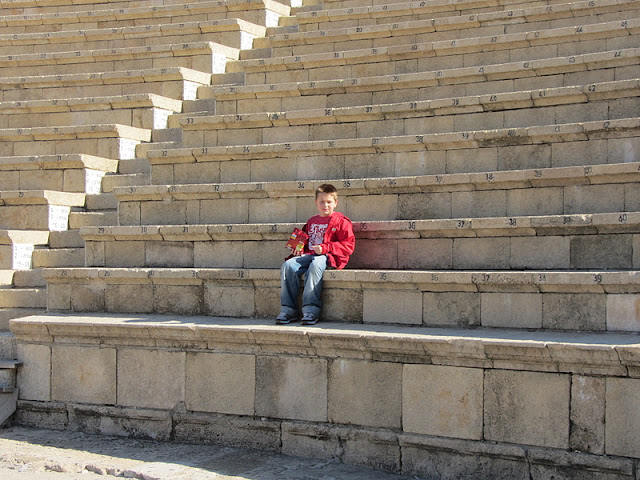 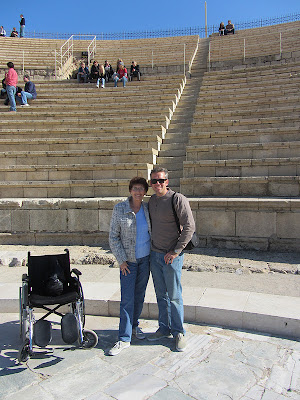 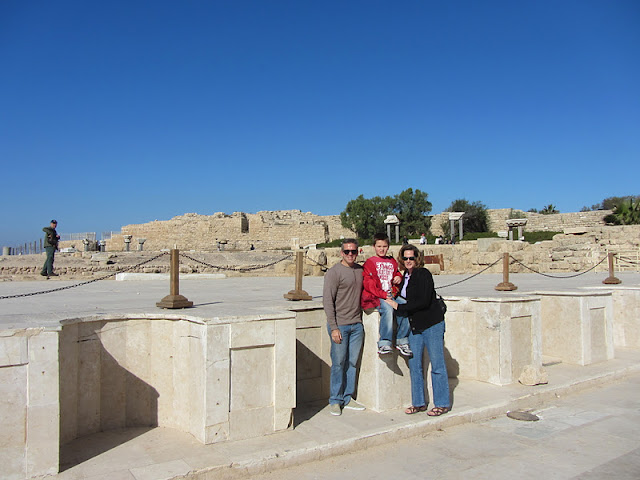 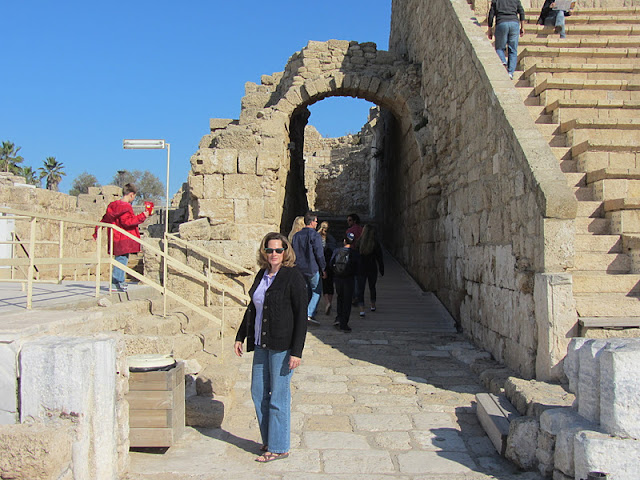 Next we walked through the archaeological garden into the area that was occupied by Herod's palace.  This was built on two levels, both extending out into the sea.  The upper tier consisted of the public and ceremonial rooms, while the lower, surrounded by the sea on three sides, comprised his luxurious private apartments. 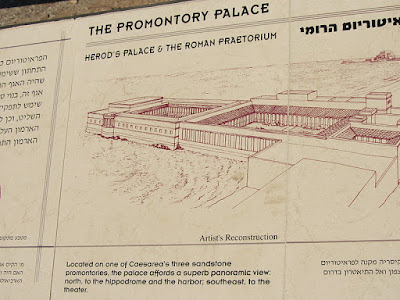 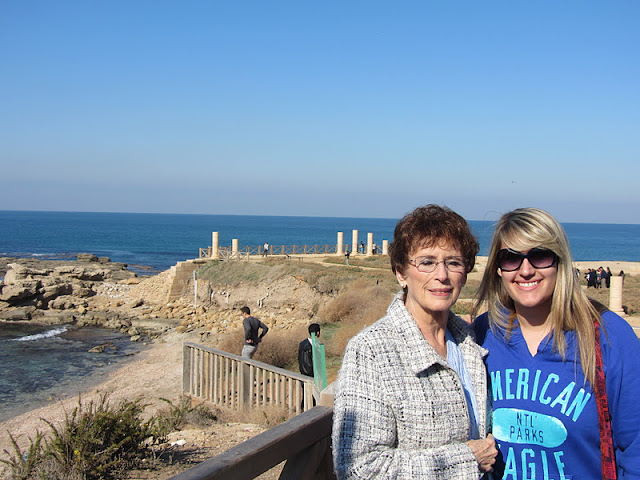 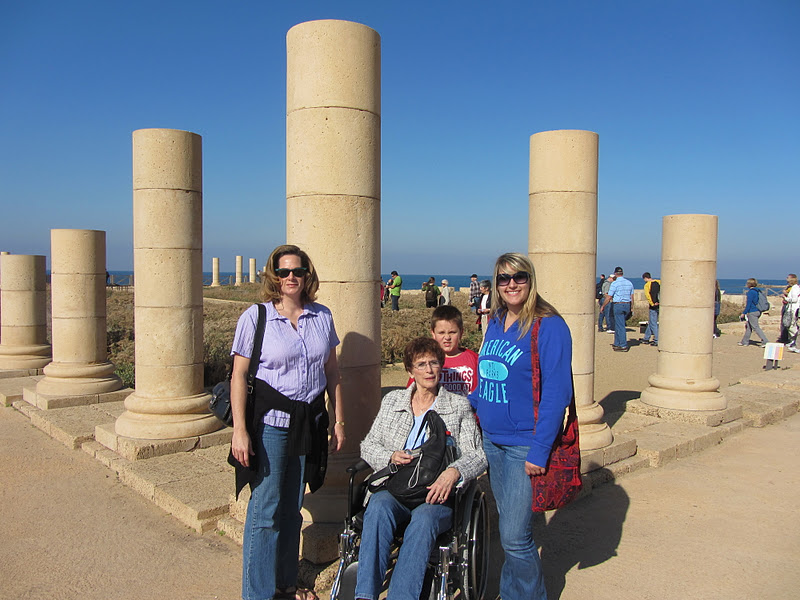 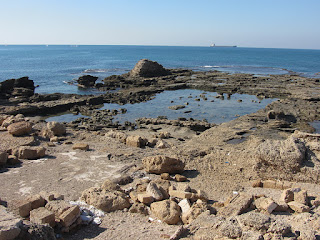 Next we explored the hippodrome or stadium.  Because it was filled with sand, it was, ehem, a little difficult pushing Mother through it in her wheelchair!  Samuel enjoyed the chariot and horse mock-up as well as the promenade fronting the hippodrome that overlooked the sea. 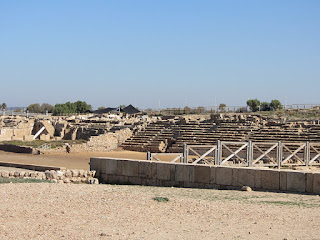 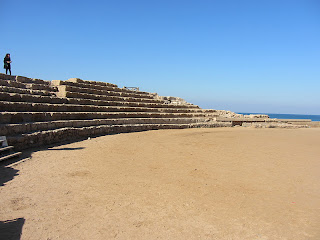 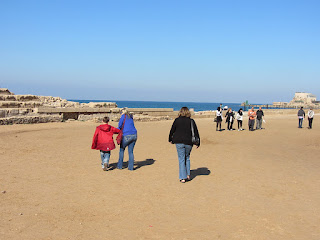 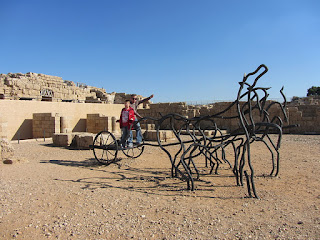 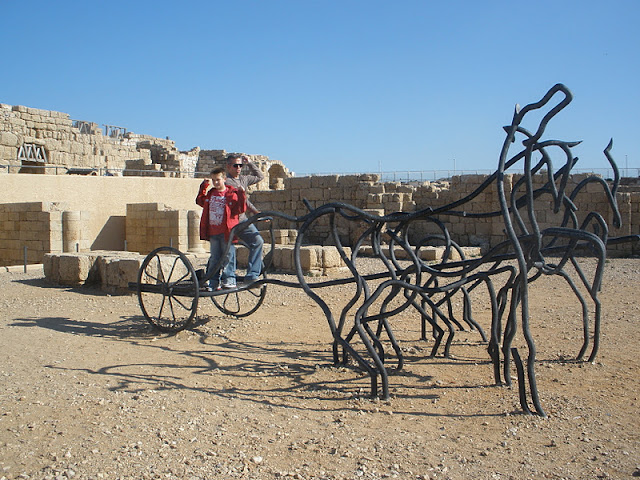 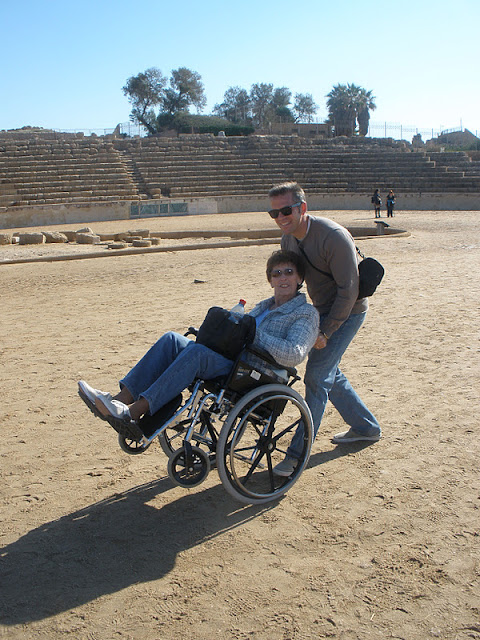 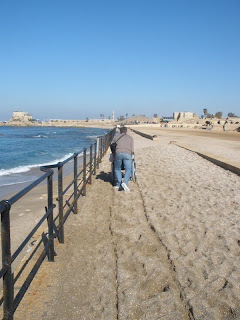 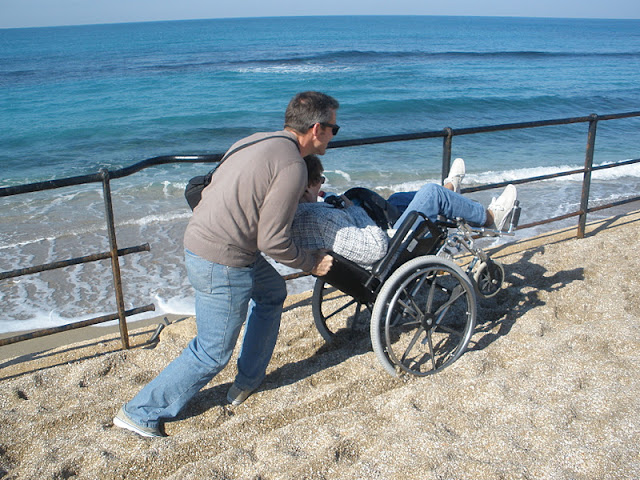 After we left the main site at Caesarea, but before driving on to Galilee, we stopped to see the remains of the Roman-era aqueduct that brought water to Caesarea. 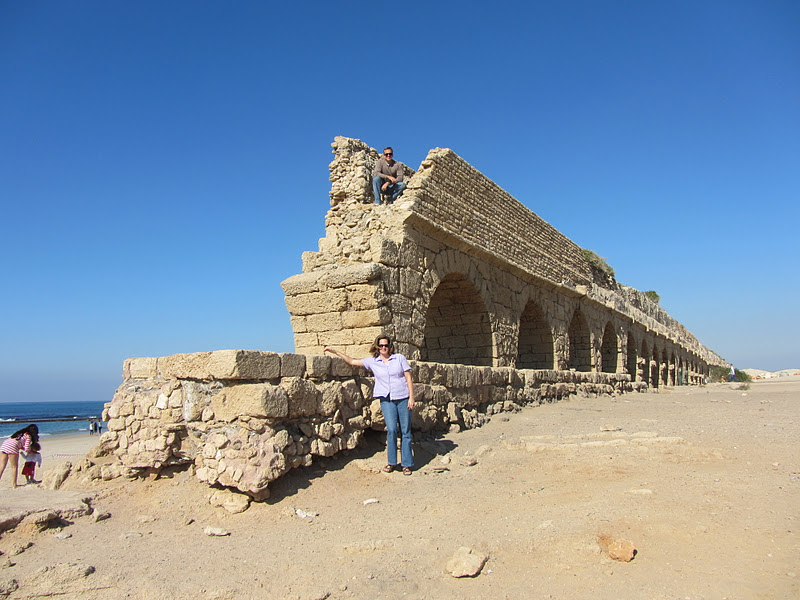 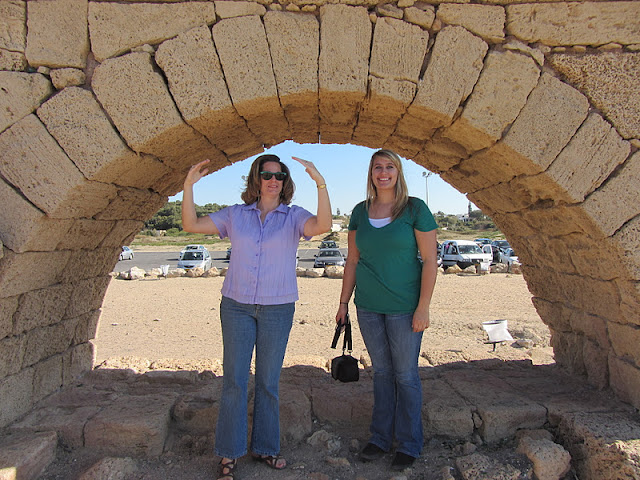 By the time we had arrived in Nazareth it was time to lunch.  Nazareth is the largest Arab city in Israel.  Like Bethlehem, it was formerly a majority Christian town, though a continued influx of displaced people as now made both majority Muslim.  But whereas Nazareth and Bethlehem were once very similar, the economic impact of the separation wall, as well as those opportunities afforded by being part of the larger Israeli society (not ignoring the social and other challenges faced by Israeli-Arabs), have made them very different now.  Nazareth by comparison was quite prosperous, as we saw in the mall at the edge of town where we got . . . yes, wait for it . . . Kentucky Fried Chicken for lunch! 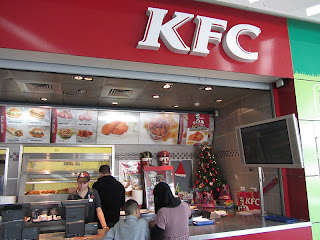 I have blogged earlier about the sites at Nazareth, but it was exciting to have my family there to see them with me this time. 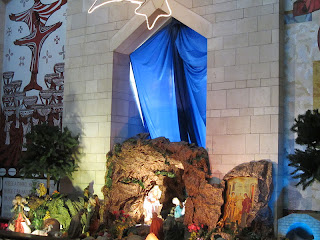 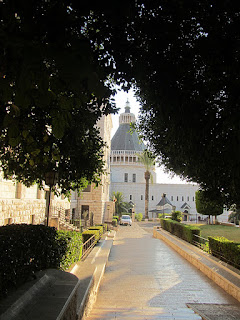 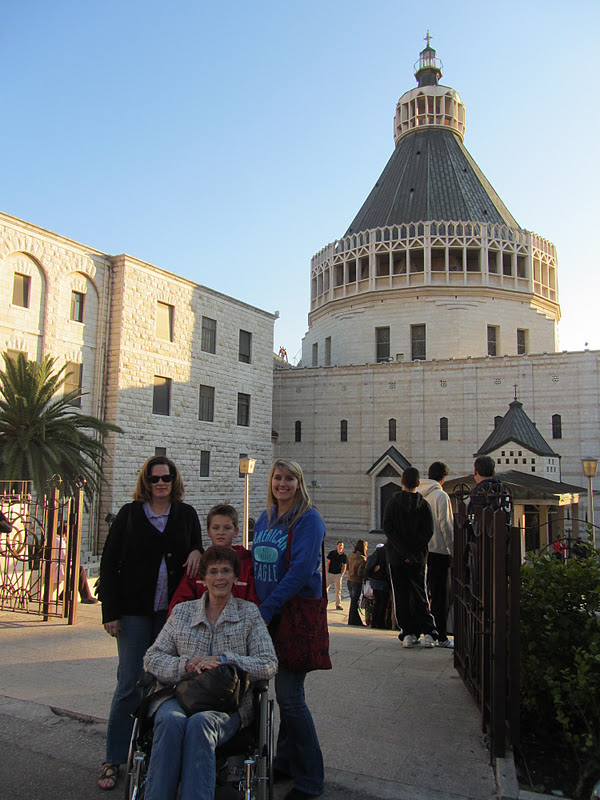 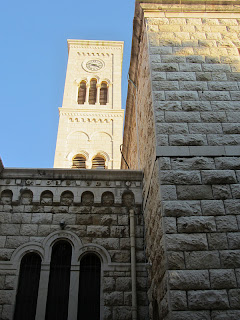 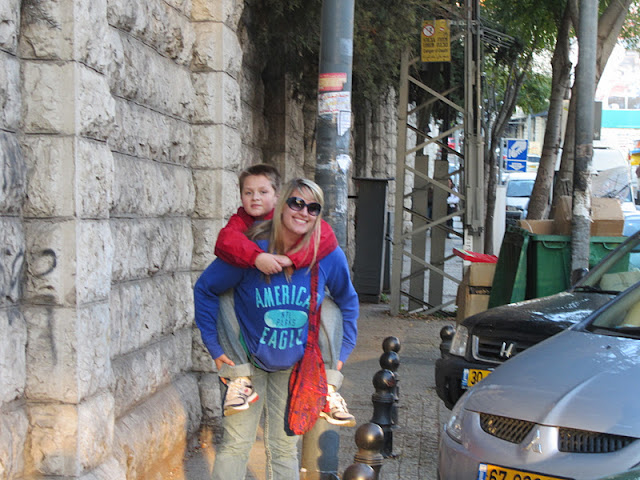 We then picked up Rachel in Nazaret Ilit, or "Upper Nazareth," and then drove on to En Gev, where we stayed for the next two nights.