It just keeps getting better . . . I love the Galilee. Let me repeat that, I love Galilee. It boasts beautiful countryside, and so many of the sites are pregnant with stories and memories of Jesus' ministry there, and compared to Jerusalem, without the rich but distracting buildup of two millennia of churches and other buildings it is often easier in the north to imagine what it would have been like in the time of the Savior. Still, this morning we had my most moving moments yet on this trip. In fact, on social media this morning I used the hashtag #HighlightofOurTripSoFar.

That is because we started our day at or near the baptismal site of Jesus. We accessed this from the side of the Israeli-occupied West Bank of the Jordan River, at a place called Qasr al-Yahud (Arabic, قصر اليهود‎; Hebrew, אל יהודקאסר ), which originally meant either "Castle" or perhaps "Crossing of the Jews." It is a place that preserved the memory of the miraculous crossing of the Children of Israel into the Promised Land under Joshua. On the Jordanian side opposite is also the traditional place from which Elijah went up into heaven in a fiery chariot. Knowing that both of these events occurred somewhere near where Jesus was baptized helps us understand this sacred ordinance better.

The traditional baptismal site is actually on the Jordanian side, where there is a simply wooden shelter at the approach to the river. In the area behind it, however, is a much more involved set of archaeological remains because the Byzantines understood that John was active in Bethany-beyond-the-Jordan. What is now the Israeli-Palestinian side was the Roman province of Judea, where both imperial and Jerusalem priestly authorities could have interfered with the work of John the Baptist. By operating on the east bank, he was in the jurisdiction of Herod Antipas (though this did not end up working in his favor in the end). 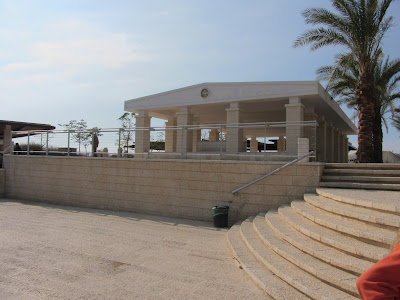 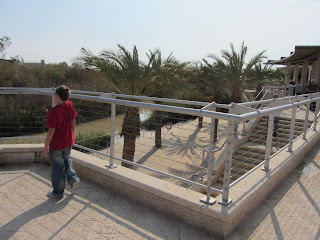 The more spacious, modern facilities on the Israeli-Palestinian side opened in 2011. Usually they are very crowded, with Christian pilgrims from all over the world coming to recount the experience of Jesus here. Both individuals and large groups often come to immerse themselves in commemoration and as a renewal of their own baptisms. Today, however, we got here even before the gates opened at 8:00, and with only our two buses there, we were able to switch off, with my group going straight to the water and Dan's starting in a shady pavilion for teaching first.

I began by reviewing the story in Mark 1, pointing out its differences from Matthew and Luke 3. We talked about what these secondary accounts added and also talked about John 1 and 2 Nephi 31. I then connected Jesus' baptism with Joshua's crossing and Elijah's translation, noting how entering the Promised Land or ascending in a fiery chariot are both types of how baptism opens the gates of heaven for us. Wes sang "Baptism" from the Children's Song Book, and then because we felt the spirit so strongly, I led our group in prayer. There were tears. 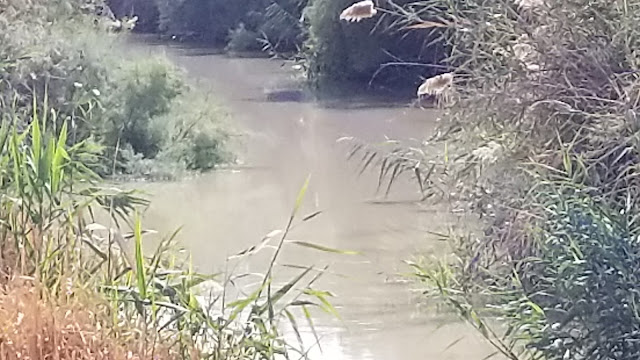 It was great to share this experience with family and friends. Having Rachel here reminded me of bringing my whole family---Elaine, Rachel, Samuel, my mother, and my niece here in December 2011, and my sister and brother-in-law here in May of 2013. This time I also had friends and neighbors present from different times and places in my life.
Before our group left the area by the river, we joined with Dan's bus for one large group picture. 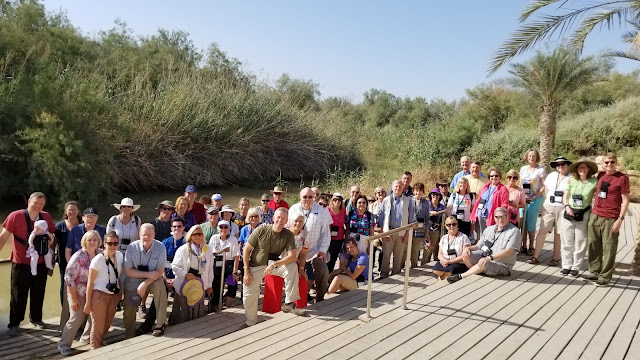 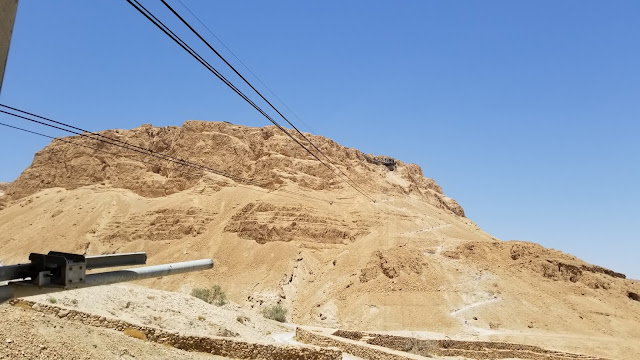 The name Masada comes from an Aramaic word meaning "fortress." It is a free-standing plateau near the Dead Sea whose site is nearly impregnable.  The Hasmonean Jewish king Alexander Jannaeus (103-76 B.C.) first fortified the plateau.  Later during the civil wars that Herod the Great fought against one of the last Hasmoneans, he left his family there while he went to Rome, seeking the Senate's support for his bid for the kingship.  Later after Herod was firmly established as the ruled of the Jews, he not only further fortified the site, he also built two luxurious palaces there. 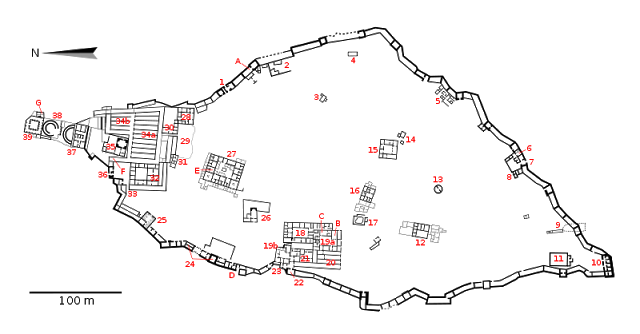 The thin, narrow rooms in the plan above are called "storage magazines" and were used to store grain, dried fruits, and enough supplies to last for months or even years. An ingenuous water system caught all the water from winter rains and flash floods in the valleys around the plateau and channeled them into deep cisterns. The luxurious palace was built on cascading levels on the north (on the right in the plan above). A second palace was built on the west side.

During the Jewish Revolt of A.D. 66-73, Jewish extremists, especially of the sicarii party, gained control of Masada. The fortress did not become a priority for the Romans until Jerusalem had been taken, the temple had been burned, and other, more major centers had been captured. But in the last year of the war, the Romans began a lengthy and difficult siege of the fortress, completely surrounding it with a low wall and building a massive ramp on the western side by which they eventually took the seemingly impregnable fortress.

During the rebel occupation of Masada, they converted a large stable into a meeting room or synagogue. This is where they would have met the night before the fortress fell to make their fateful choice to commit suicide rather than face slavery or death at the hands of the Romans. Oddly, the remains of few bodies have been found at the site, and there are a number of reasons to question Josephus' account. Regardless, we met for a quasi-devotional in this converted synagogue to talk about the sanctity of life and how God wants us to live for him as much, or more, than he wants us to die for him. 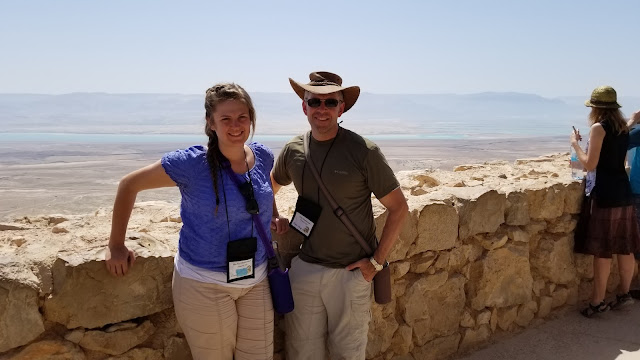 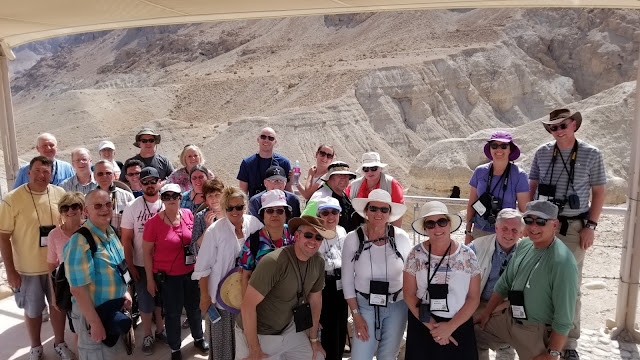 After lunch, we visited the site of Qumran, an intriguing settlement of ascetic Jews---sometimes described as "monastic"---who lived in a communal society.  Apparently they withdrew from the larger Jewish society during the Hasmonean period because they felt that the establishment and temple priesthood was corrupt.  Although much is still unknown about the details of their origins and many aspects of their community, what is known is that they left caves full of scrolls containing all manner of religious texts---early versions of the Hebrew scriptures, apocryphal literature, and sectarian documents (such as the Rule of the Community).

As is customary, while we were in this area, we took the opportunity to float in the Dead Sea, which is the lowest spot on earth and has 34% salinity, almost 9x as much as the ocean. It is fun to paddle in it and even cover ourselves with the mud, but its waters sting and smell a bit. 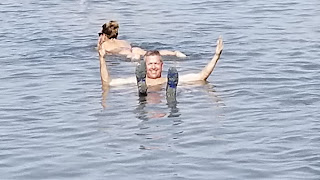 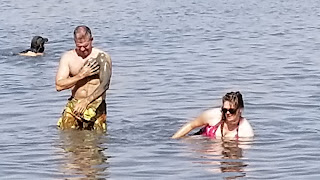 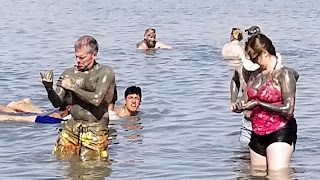 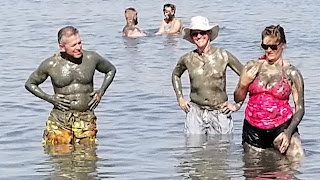 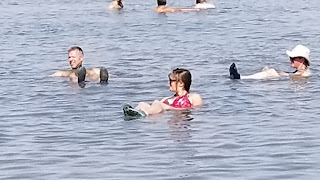