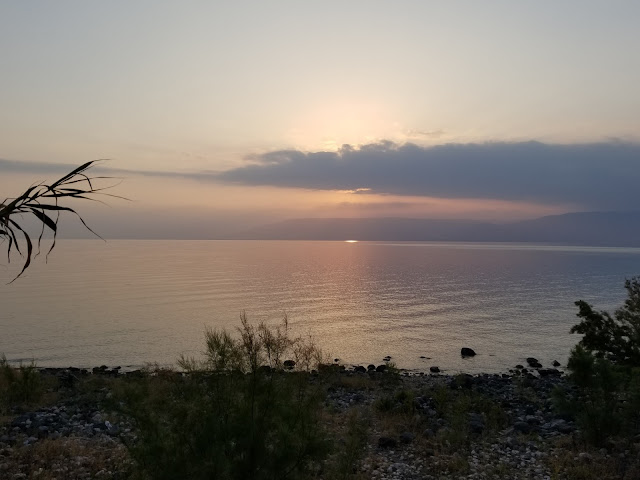 I began my day with an early morning run along the boardwalk of Tiberias and then along a stretch of the western shore of the Sea of Galilee that yielded some lovely photos. 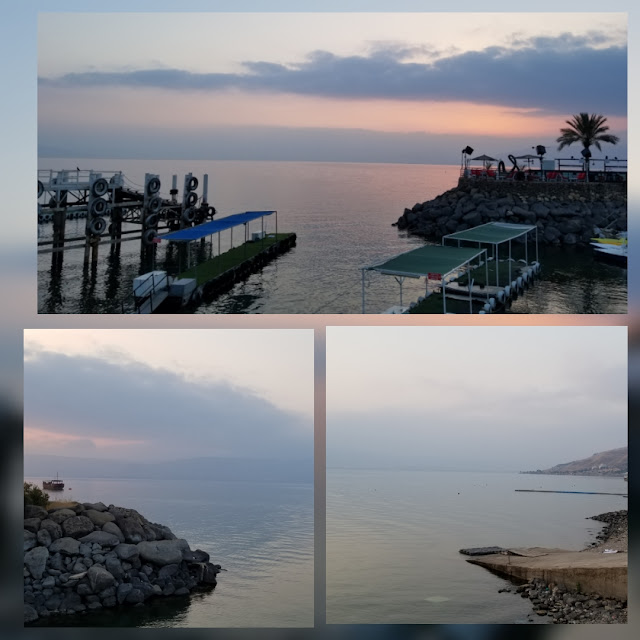 We began our day with a walk along the trail in the "Valley of the Doves," which lies below Mount Arbel and comprises the route that Jesus would have taken from Nazareth and Cana to Capernaum and other sites near the Sea of Galilee. Because this has been preserved as a dirt hiking trail and passes through an Israeli natural park, it provides a real feel for what it would be like to "walk where Jesus walked." 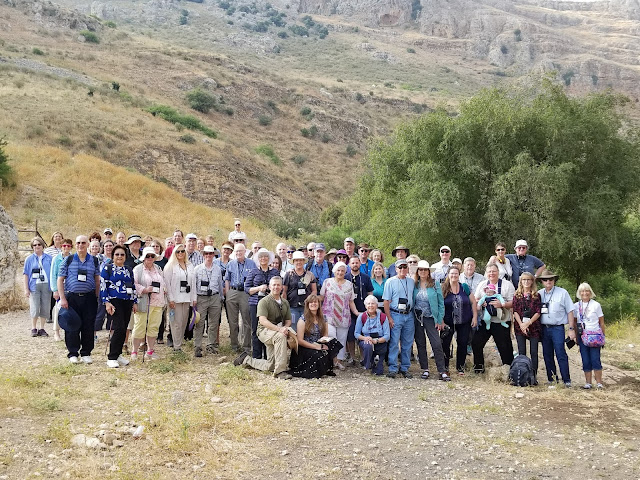 We began with a devotional where I briefly talked about the call of Peter and Andrew and then James and John from their nets as described by the Synoptic gospels. I then described the call of the earliest disciples according to John 1 and compared it to our own walk with the Lord. We then sang "Come Follow Me" and gave everyone time to walk or sit and meditate quietly.

If you would like to see what it is like to be part of one of our devotionals, see this video clip: 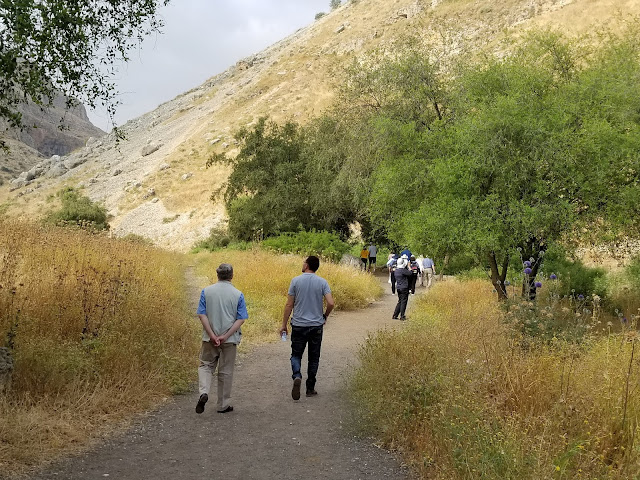 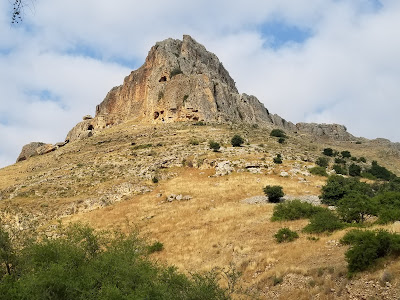 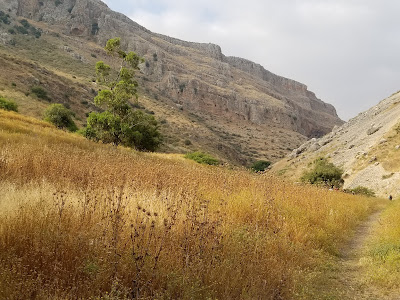 We then went to the Tabgha, the site of the Church of the Multiplication of the Loaves and the Fishes. Tabgha is an Arabic reduction of the Greek Heptapegon, or place of the seven springs. This is a good example of the difference between an authentic (or highly probable) site and a traditional site. Some places, such as the Basilica of the Nativity, the Church of the Holy Sepulchre, and the Basilica of the Nativity, have both early (usually pre-Hadrianic, that is earlier than A.D. 135) tradition and archaeology to support them, while most others are traditional. That is, they have been venerated as places to remember biblical events since the time of Constantine. The Church of the Loaves and the Fishes is one of these. It was built by the Byzantines soon after Constantine but was destroyed by the invading Persians about A.D. 614.

It then lay in ruins until 1939, when the site was excavated and the long process of building a new church on the site was begun. The new church, dedicated in 1984, was built in the plan of an early Christian basilica and preserves many of its original mosaics in its floor. The most famous of these is the depiction of a basket of bread loaves and two fish that is set below the altar. 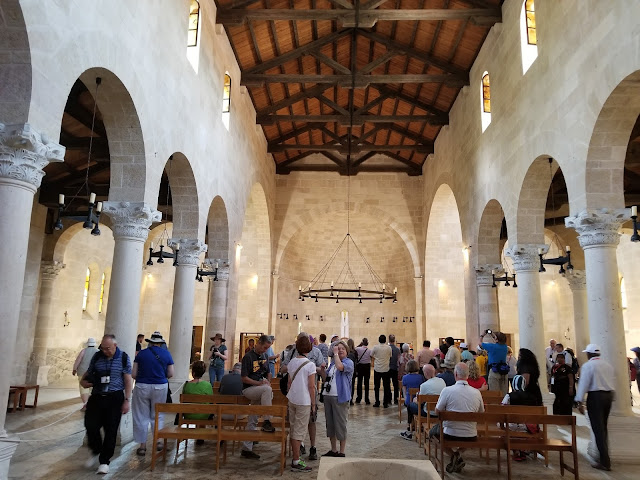 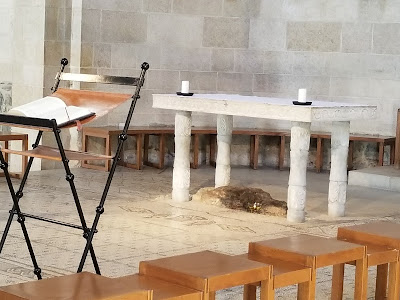 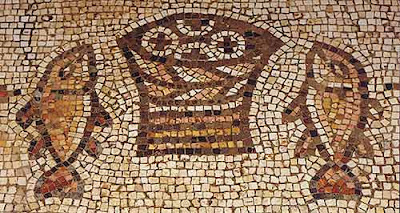 We held our devotional in the atrium (courtyard) of the church, where I read the account of the Feeding of the 5,000 from Mark 6:30-44 and then discussed the account and the Bread of Life Discourse in John 6. We then sang "While of These Emblems We Partake." 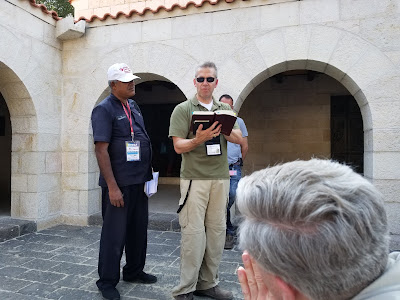 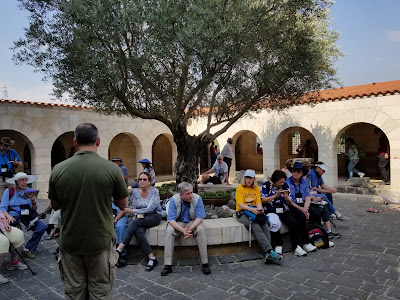 We drove next to the lovely site on the Mount of Beatitudes. Near the church, we read from Matthew 5 and 6 before singing "More Holiness Give Me" and then having personal time to walk quietly around the lovely grounds. 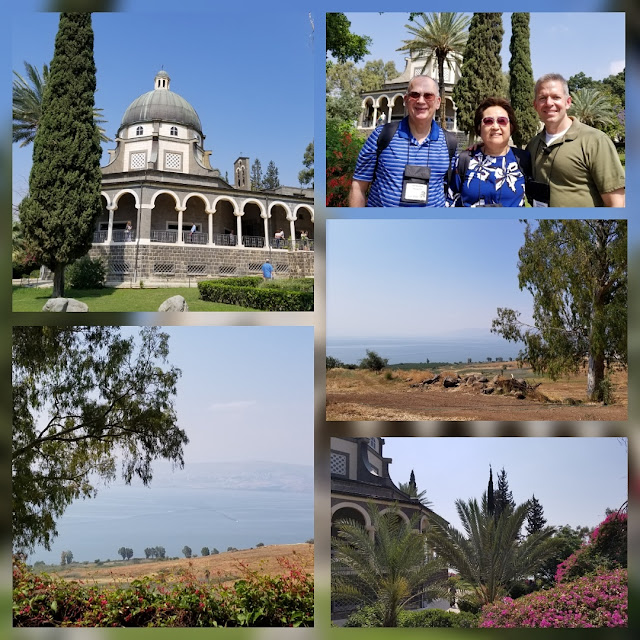 We then drove through the Upper Galilee and into the Golan to hike down into the lush valley that surrounds the Banyas Falls. The Banyas stream flows from Banyas (Banias), which is the site of Caesarea Philippi. 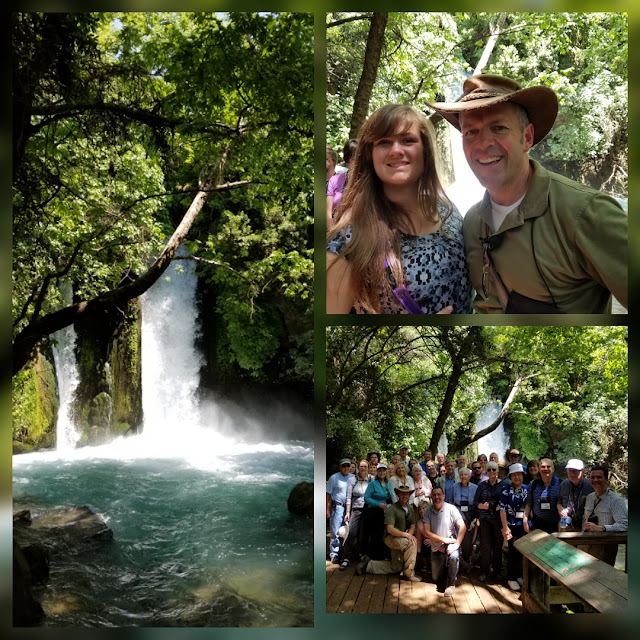 After lunch at a nearby Lebanese restaurant, we visited Caesarea Philippi, where we read the account of Peter's confession that Jesus was the Christ and compared it to Matthew 16's version and its more developed christology. We talked about testimony and sang "I Believe in Christ" before hiking up to see the site itself, which was originally a sanctuary to the god Pan and also boasted a nearby Temple of Augustus. With Jesus being the true son of God as opposed to Augustus being "the son" of the deified Julius Caesar, the huge cliff face (or rock) overshadowing the pagan cults and a cave that was seen as the entrance to the underworld, and the site of one of the sources of the Jordan river literally flowing out from under the massive rock, this was a fitting context for Jesus' question to Peter and the disciple's response. 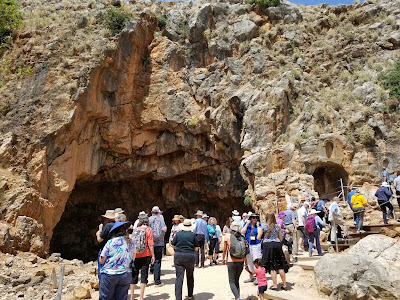 Our final excursion was a drive up to Har Bental, high point over looking the Syrian border. It is a point pregnant with recent history, being the site of hard-fought battles in both the 1967 and 1973 wars. While that history was interesting, and while it is always unsettling to stare across such a disputed boundary, especially since on of the cities within our view is now held by ISIS militants, we ended out visit by looking at Mount Hermon, which is a good alternate site for the Transfiguration, and discussing Saul's encounter with the Risen Lord on the road to Damascus as recounted in Acts 9. 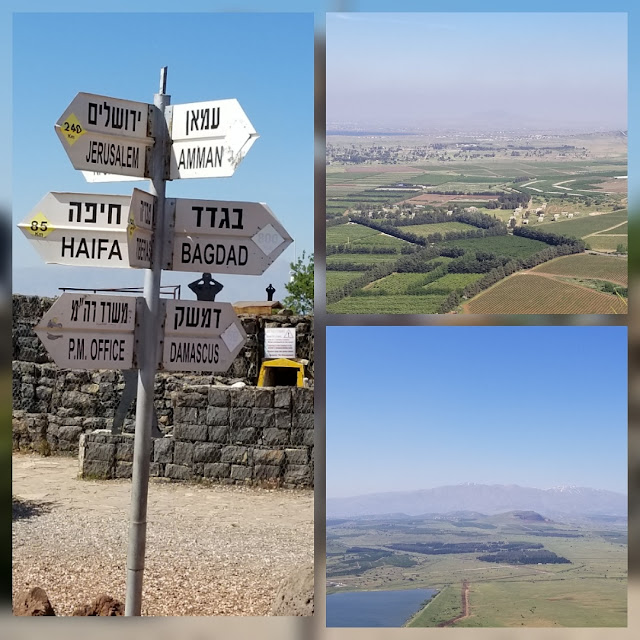