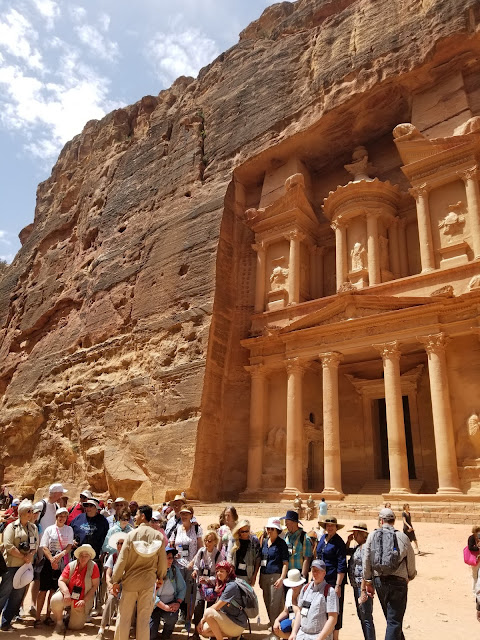 Here is a video collage of today's events:


Today we started with what is, no doubt, the premier site in Jordan, the fabulous ruins of the Nabatean city of Petra.  The Nabateans were an early Arab people who moved into much of the territory of the Old Testament kingdom of Edom (the Edomites, in the Persian period, moved into the southern part of OT Judah and became the Idumeans of the New Testament).  They expanded their territory east, south, and into the Sinai and became incredibly wealthy in the first centuries before and after Christ because of their acumen as merchants and in particular because of their control of the spice trade. 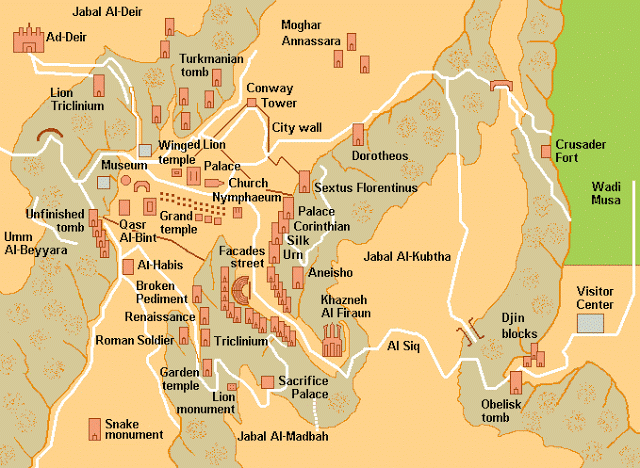 They built their capital in a sunken valley surrounded by high mountains that had only one way in and out, the narrow cleft valley known as the Siq.  Approaching the siq and in the valley itself are hundreds of tombs cut right into the rock face, many of them incredibly ornamented.  Perhaps the most famous, the so-called Treasury, is known from the Indiana Jones movie The Last Crusade.

Because we only had about 5 hours (not that much time for such a huge, interesting site that requires a lot of walking and climbing), after we did the usual introductory approach to the Treasury, we kind of hurried through the city area, looking briefly at the theater cut into the hill, the Great Temple, and the interesting Egyptian-influenced building now called Qasr-al-Bint ("Palace of the Daughter," ostensibly built for a daughter of a Pharaoh, though that is necessarily an anachronistic and incorrect identification).


Our real goal was to climb the 800-some steps up to "the Monastery," an even larger version of the Treasury. Rachel spent 8 weeks here last summer with the BYU team under Cyndy Finlayson, excavating a large water pool and water works complex called the Great Circle.

While it was fun to see where Rachel had worked, what was even more touching was how many of the Beduin girls and old men who sell trinkets along the climb remembered her and wanted to clasp her and tell her how sweet she was. And when I told them, Hiye binti ("She's my daughter!"), they pulled me into their embrace as well. One wrapped me in a khefiyah, telling me that I was the father of a fine daughter. A sweet, old, old woman, who does not speak a lick of English, kissed and stroked her cheeks and made us each sit beside her while she patted our hands.

Then there was the frantic race to get all the way back down the mountain, through the city, up the Siq, and up the long road to the bus area. As always, we mistimed it and had to walk and double-time. It was not enough: we were going to be late though I had warned the others in our group not to do just that. We had joined with some friends, some of whom took horse carts up. We did not want to pay the high price, but I finally got one for Rachel and my neighbor Ruby Beeston, which left here husband Bill and me to trot as fast as we could. It was not enough. As we got out of the siq and still had a long way to go, I broke down and rented horses for us. It was Bill's first time on a horse. I channeled my Dad and Grandpa and galloped most of the way, wishing I had my Indiana Jones hat back on rather than my gifted keffiyeh.

This desert valley was known as "The Valley of the Romans" (Arabic, وادي رم) perhaps because many ascetic Byzantine monks (remember Byzantines = Greek-speaking, Christian Romans) withdrew to isolated spots like this to get away from the world and be with God. Because it is in so many ways a quintessential Arabian desert, movies such as "Lawrence of Arabia" and recently "The Martian" were filmed here. 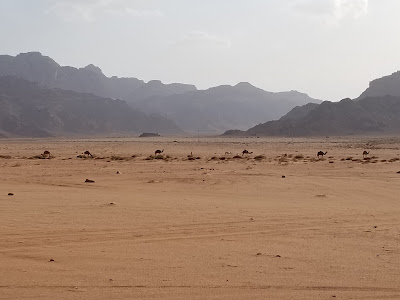 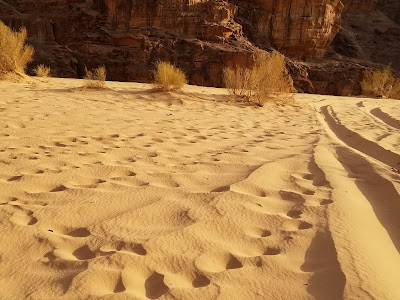 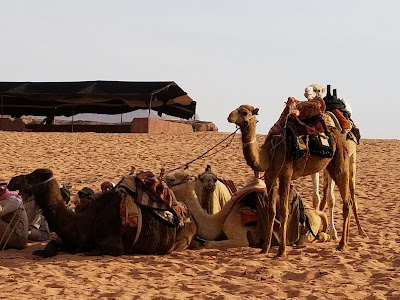 We all piled into 4x4 pickup trucks and went on a mad drive through the sand. We stopped to look at interesting, really an ancient carvings of the mysterious Thamudic culture (kind of like the American Anastazi). We also stopped at a magnificent canyon lookout that gave us a view of the vast Plains of Midian, which gave us a chance to talk about the wanderings of the Children of Israel in the wilderness. 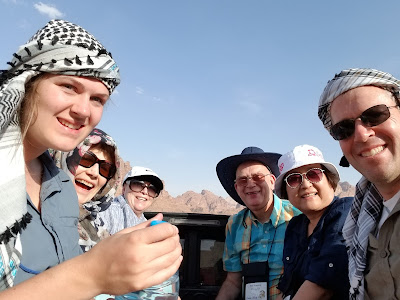 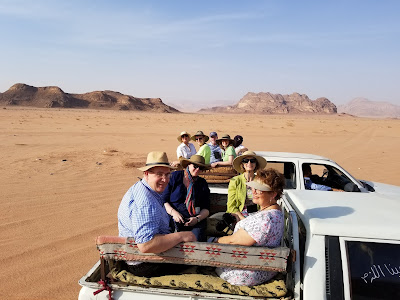 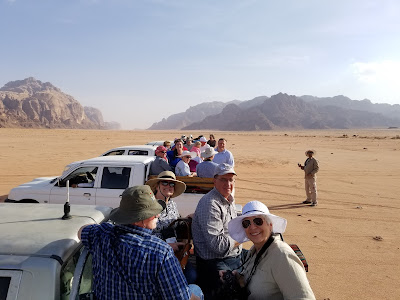 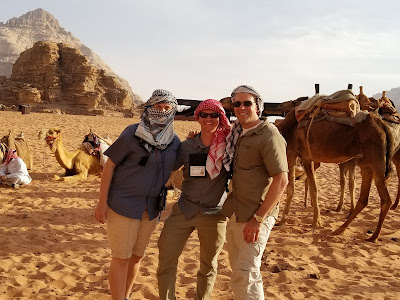 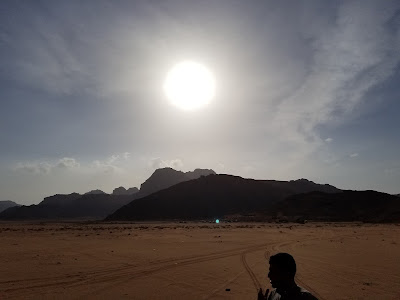 Then we went to a Beduin camp for a feast and to watch some dancing. It was quite a day! 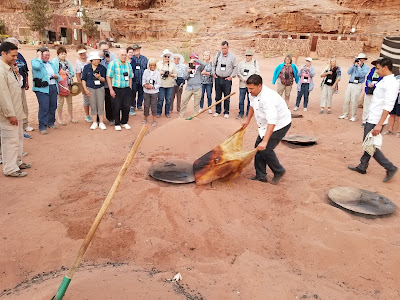 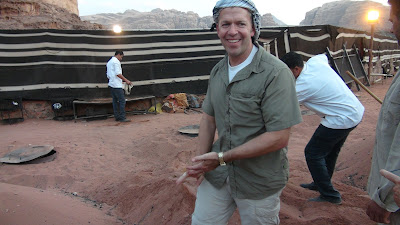 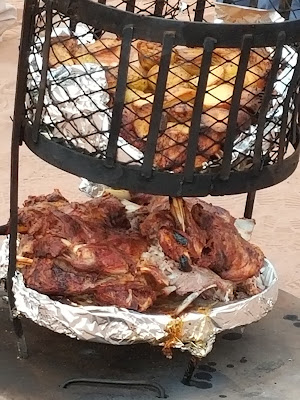 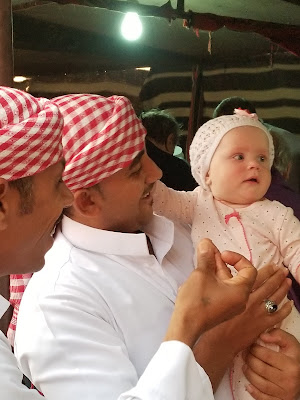 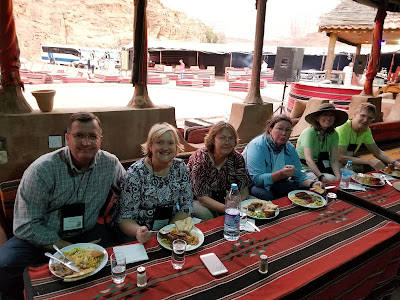 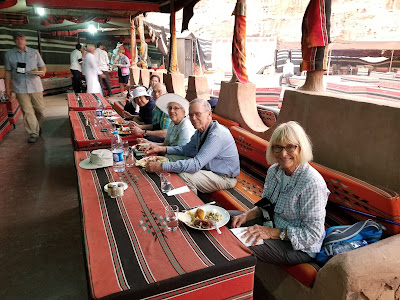 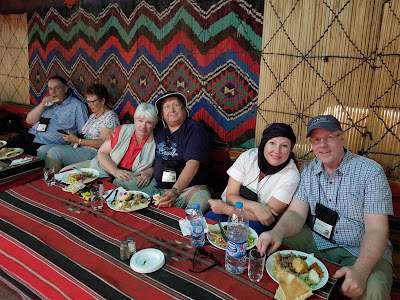 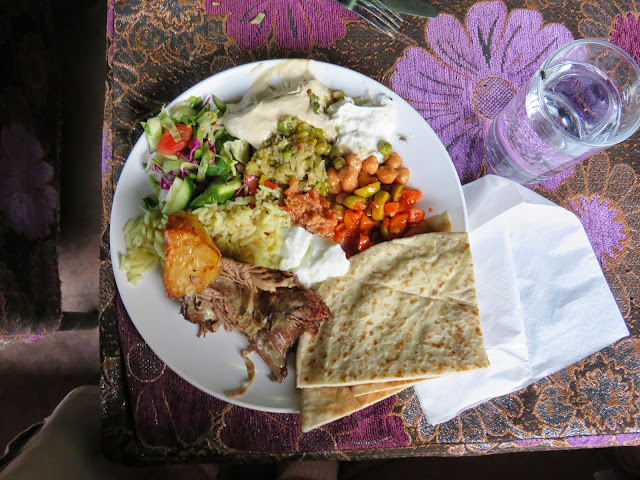 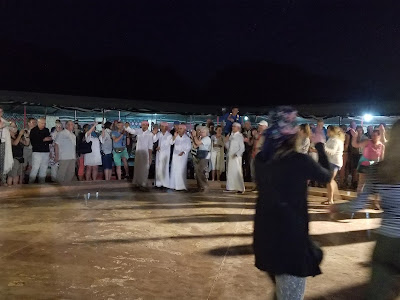