A Day in عمّان (Amman)


عمّان‎‎, or Amman, is the capital and largest city of Jordan. Today it is a bustling metropolis of some 4 million people, but at the turn of the twentieth century it was sleepy backwater town. At that time it was part of the Turkish Ottoman Empire, and records show that it only had 5,000 residents in 1906, and most of them were not even Arabs! They were Muslim Circassians whose ancestors had fled from southern Russia. When the Ottomans built a railway from Damascus to Medina, it passed through Amman, which led it to grown somewhat. 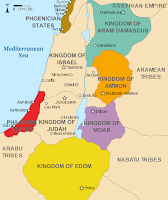 The British seized this region from the Turks in World War II and installed the Hashemite emir  Abdullah I, who later became king of Transjordan, a new country east of the Jordan River. The city exploded in size in 1948, when Palestinian refugees from the 1948 Arab-Israeli War streamed across the river. Many more came after the 1967 War, and today almost half the population of Jordan lives in its capital.

The reason that a visit to Amman is part of our "Holy Land 2017" tour is because modern Amman was the site of biblical Rabbath-Ammon, the capital of the Ammonites, who were cousins to the Israelites and Moabites. 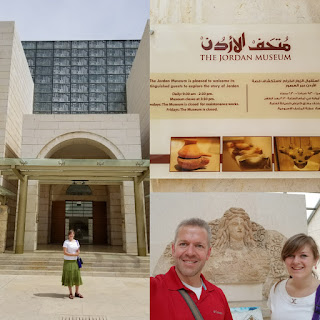 Rachel and I started our day off at the new Jordan Museum. This is a spacious, modern facility that was built with generous help from Japan. Only the bottom floor is currently set up for exhibitions, but it is full of a representative collection of fine artifacts from the Paleolithic (Old Stone Age) Period up through the Byzantine Period (Byzantine: repeat after me, "Greek-speaking, Christian Romans").

The  Paleolithic artifacts include some of the earliest known representative statues yet discovered, dating as early as c. 7600 B.C.! One of them, oddly, has two heads. Archaeologists still have not decided what this may represent. There are items from the biblical Ammonites, the Hellenistic period when Amman was the Greek city of Philadelphia, the Roman period, and finally the Byzantine period. Rachel spent part of last summer digging at Petra (more on that Wednesday, I am sure), so she was like a kid in a candy store, racing from display to display. 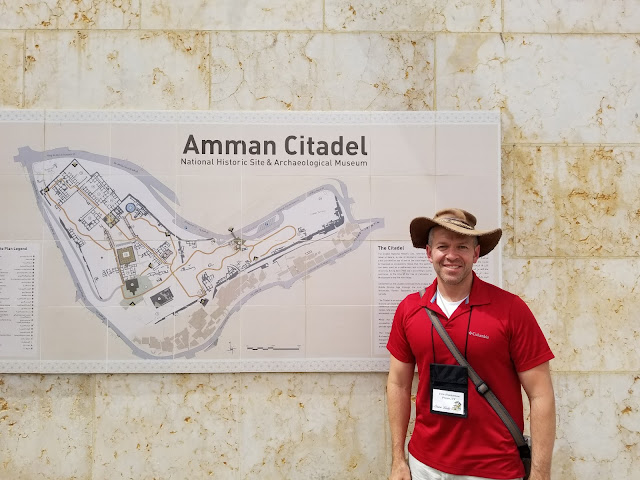 While the official part of the Jordanian leg of our tour does not start until tomorrow, in the afternoon Rachel and I joined eleven of our group that had arrived early for a quick tour of some of the important ancient sites of Amman. As must be done in so many of these countries, we are legally obligated to have a licensed local guide, in our case an amiable young man named Roberto. He took us to the citadel, which has been inhabited since the Neolithic (New Stone Age) Period. The earliest settlements were on its defensible heights, the spring near its base being augmented by water stored in many cisterns that caught the winter rains. The Ammonites, like the Moabites ostensibly descended from Abraham's nephew Lot (I won't go into the unsavory details here!), had their capital here. And this was the site that King David's armies besieged. This was the first time that David did not lead his troops in battle. He should have. I will let you read this story in 2 Samuel 11. I won't go into the details, but it did not turn out well for Uriah, David, or the Ammonites.

The Ammonites were vassals of David and Solomon, often at war with Judah and Israel after that, and, like all the petty kingdoms in the area, were often subject to larger neighbors---the Assyrians, Babylonians, and Persians in rather quick succession. When Alexander the Great conquered the region in the late fourth century B.C., like many cities, Ammon was "Hellenized."  Some Greeks settled here and many local notables adopted Greek language and culture. In this period a Greek king of Egypt renamed the city Philadelphia. Local gods, such as the Ammonite Milcom, received Greek names, and in the Hellenistic and Roman period he was worshiped as Hercules.


The site of the citadel has monuments and remains of buildings from each of the following ancient periods. One of my favorite, of course, is the Byzantine, represented by a fine little church. After the Arab conquest, the name of the city went back to Amman, and the Ummayad dynasty later built a large mosque and palace complex on the site.

After finishing at the Citadel, we went down to the valley where the Romans had refurbished and expanded the Greek theater. We then walked through the old shopping district to finish our day with falafel and other Arab food. 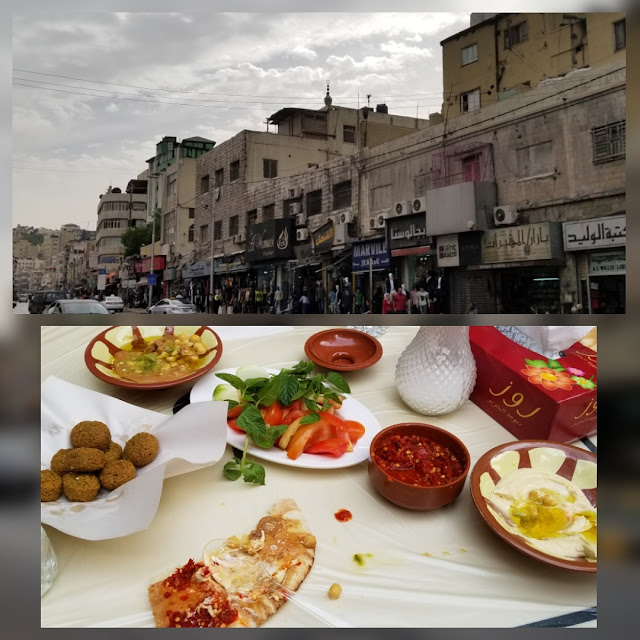