Starting the day in جرش (Jerash)

After checking out of our hotel in Amman, we started our first full day in Jordan with the entire group. Many of them came in quite late, but I was able to go down to the hotel restaurant as they came in to get some dinner before heading to their rooms. Along with meeting new friends, I was thrilled to see my across-the-street neighbors Ruby and Bill Beaston, and fellow Tabernacle Choir members Ian Christensen and Tim Wright, along with Tim's wife Teresa. I also met people I know from Education Week and last year's Mediterranean Cruise.

In harmony with our concept of having this be a "pilgrimage," not just a tour, our local guide Roberto let us start our bus trip with a devotional. I shared some thoughts about Father Abraham, an important figure in Judaism, Christianity, and Islam. Called from his home in Ur, he came to the Holy Land in response to God's call, and here made covenants, came to know the Lord, and be called "the Friend of God." I shared my prayer that our time in this Land on both sides of the river the next two weeks would help us deepen our own relationship with the Lord. We then sang "Come, Ye Children of the Lord."

We then drove northward through the most fertile parts of Jordan, which were known in the Old Testament as Gilead and in the New Testament as Perea. It was the tribal allotment of the tribe of Gad, which lived here until many of them were taken into captivity by Assyria and the remainder mixed with the local population and lost their identity. It was resettled by Jewish settlers in the Hasmonean Period (roughly 164-63 B.C.), and it became part of the kingdom of Herod the Great. At the time of Jesus, the Perea, as well as Galilee, were part of the tetrarchy of Herod Antipas. As we drove, we passed over the Jabbock River, where Jacob, after living in Haran with Laban for 14 years to marry his wives Leah and Rachel, hesitated when he returned to the Promised Land, fearing his estranged brother Esau. While we did not have time in our fast-paced, packed schedule to stop and do a devotional here as we used to do with our BYU Jerusalem students, I did take the time as we drove by on the bus to read the account from Genesis 32:22–30. Here Jacob spent the night "wrestling with an angel" as he sought a blessing from the Lord. He later named the site Peniel, because here he had "seen the face of God." His name was changed to Yisrael, because he had prevailed with God, which led me to talk about the LDS conception of covenant making and coming to know the Lord.

Our main objective this morning was the city of Jerash (Arabic, جرش), which was known anciently as Gerasa. In the Hellenistic Period, it was one of ten or so Greek-speaking cities in the area known as the Decapolis. It grew even more in the Roman period, and it is, in fact, one of the best preserved Roman cities, in league with perhaps better known sites as Ephesus and Pompeii. It was the headquarters of the emperor Hadrian while he was resident in the area in A.D. 129-130. We started our tour by walking through a monumental, ornamental gate built in Hadrian's honor and then visited the hippodrome (Latin, circus) as we walked along the road to the city wall and gateway proper of the ancient city. 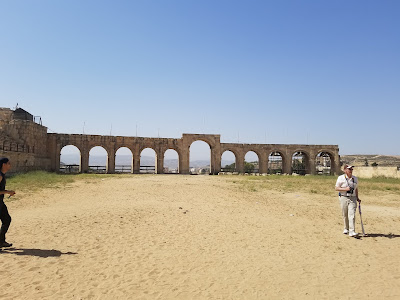 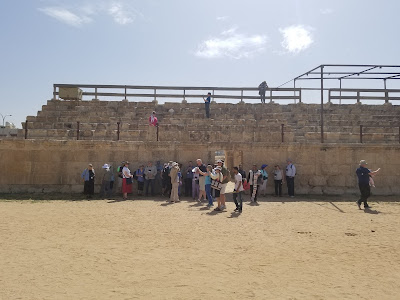 One then entered the city proper and emerged through the actual gateway into a massive oval forum, or open square, that was surrounded by columns. On a hill to one side are the remains of a temple to Zeus and a Roman theater. 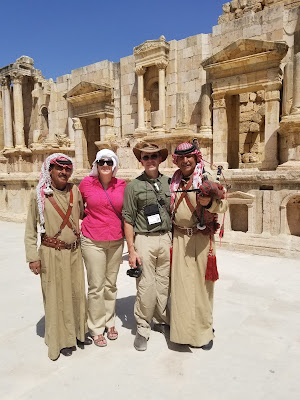 Like many other Roman cities of the time, Jerash was laid out in a grid pattern around a cardo (Main Street) and decumanus (Center Street). These main roads were colonnaded on both sides. Remains of temples and later Byzantine churches fill the hills above these streets. While not directly connected with the Bible or the ministry of Jesus, it is a fantastic site to visit! 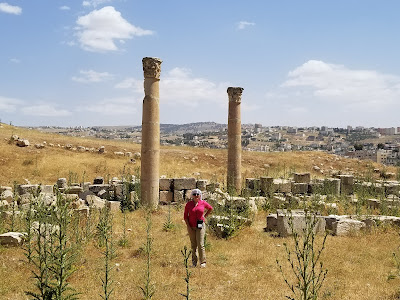 After having lunch at the Artemis Restaurant, where some of the women tried their hand at making pita, we started the LONG drive to the south part of Jordan (almost four hours). 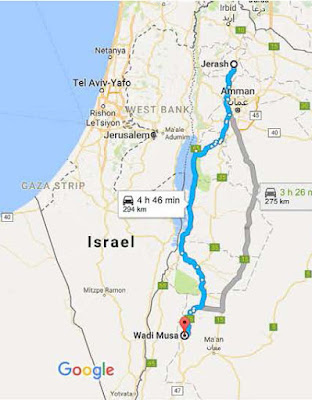 We stopped for a quick view of Shobak Castle, a Crusade stronghold in the south of Jordan, before visiting a Nabatean site called "Little Petra," which was a warm up for our visit to the more famous Petra tomorrow. As we were driving from there to Wadi Mousa, where we are staying tonight, we drove through the small Beduin town of Umm Sayhoum, where Rachel lived last year while she was doing her archaeological dig in Petra. That made her pretty excited! 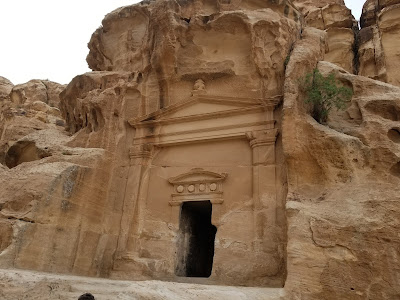 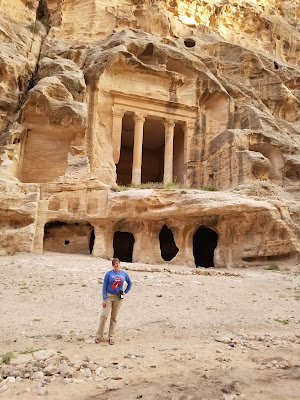