Today we arrived in Jerusalem, driving up from Jericho early in the morning but still getting caught in the rush hour traffic. As is tradition, we listened to "The Holy City" as we came through the tunnel and caught our first glimpses of the city. I had brought the Tabernacle Choir's recording featuring Stanford Olsen from our Glory! CD, so that made it particularly special. And of course, almost immediately to our hard left as we came through the tunnel was the BYU Jerusalem Center---our home from 2011-2012.


The Mount of Olives

Our trust bus driver,  Johnny, took us up to the top of Mount of Olives, driving through the narrow lanes of the at-Tur neighborhood, where we spent so much time during our year here. We then gathered at the overlook area in front of the Seven Arches Hotel, which gives spectacular of the cemeteries on the slopes of the Mount of Olives, the Qidron Valley, the Old City, and the modern city of West Jerusalem beyond.

Most of us walked down the Mount of Olives, following the traditional route used on Palm Sunday to celebrate Jesus' triumphal entry. Part way down, we stopped at the Church of Dominus Flevit, which commemorates Jesus' weeping over Jerusalem (see Luke19:41-44). 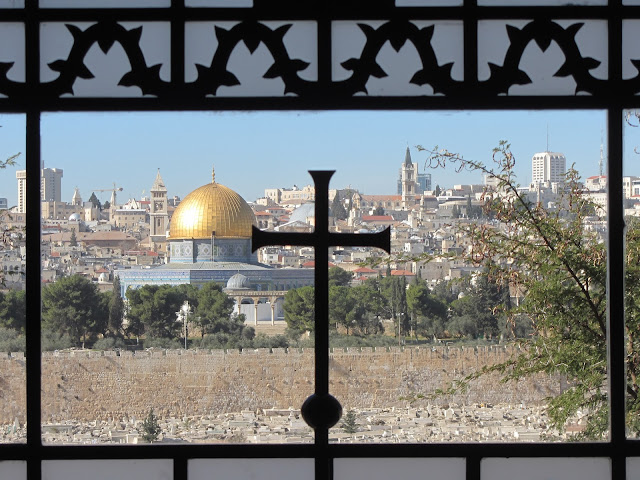 At the end of our walk down the Mount of Olives, we arrived at the site of Gethsemane, which in Aramaic means "Place of the Olive Press." Before we visited the traditional garden and church on the south side of the lane, we first entered the private Franciscan garden on the north, which has been maintained as a place for groups to have private devotionals. Ours was quite lovely. While the olive trees here are young, the quiet setting allowed us to think about what Jesus did the last night of his life as he began his awe-inspiring atoning work.

My group gathered and began by singing "In Remembrance of Thy Suffering" and having an opening prayer. I then spoke for about a half hour, drawing upon thinking and writing I have done on the atonement over the years. After consecrating some olive oil, we sang "Reverently and Meekly Now" before having a closing prayer and having some quiet, individual time in the garden. 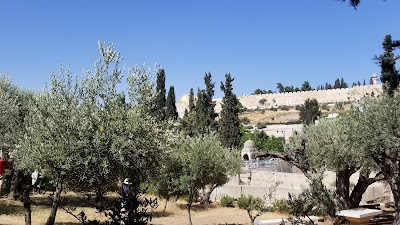 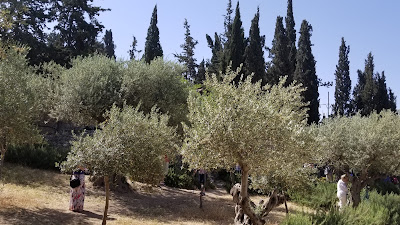 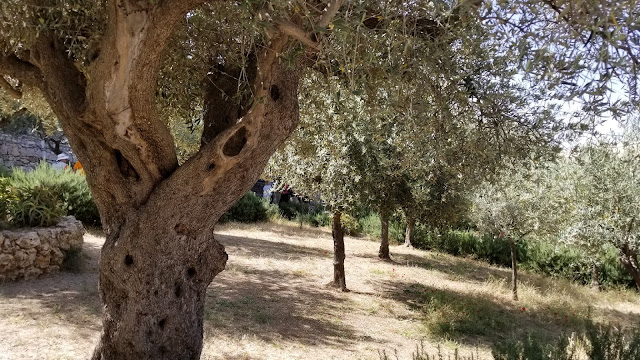 We then walked across the lane to the main Gethsemane site, where there are a few olive trees perhaps 1,200 years old, which conceivably may have grown out of the roots of the original trees that were present when Jesus was here. Here sits the Basilica of the Agony, also known as the Church of All Nations, which is modern church that sits on the site of an earlier Crusader and still earlier Byzantine church. Its darkened interior seeks to recreate the scene of Jesus' prayer and suffering and features before its altar a rock that, by tradition, is where Jesus knelt as he prayed. 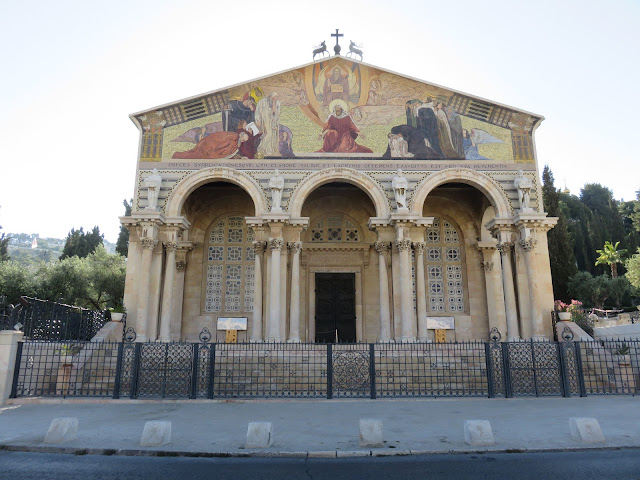 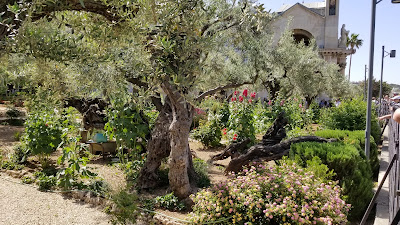 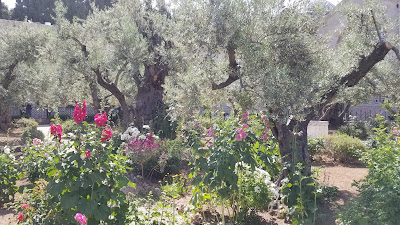 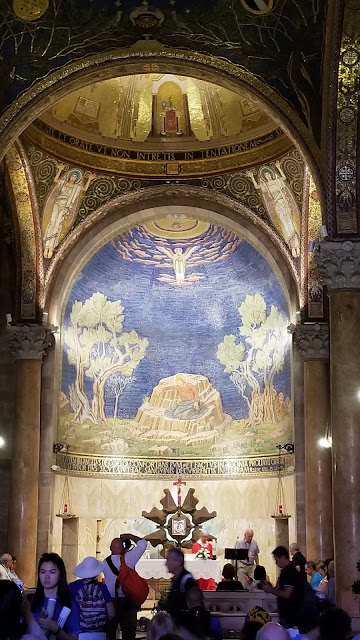 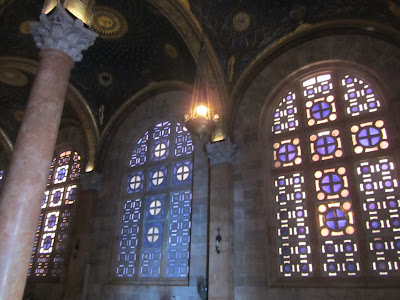 At the Foot of the Temple Mount

Johnny then drove us down the Qidron Valley, around the corner of the Temple Mount, and to the Dung Gate, where we entered the Jewish Quarter of the Old City and entered the Davidson Archaeological Park. After walking through the small but informative museum and watching a video that recreates the experience of a Second Temple pilgrim, we walked on both sides of the southwest corner of the Temple Mount, where we showed our group the large Herodian ashlars (carved) stones that made up the retaining wall of the massive platform above and pointed out the signs of the Roman destruction. 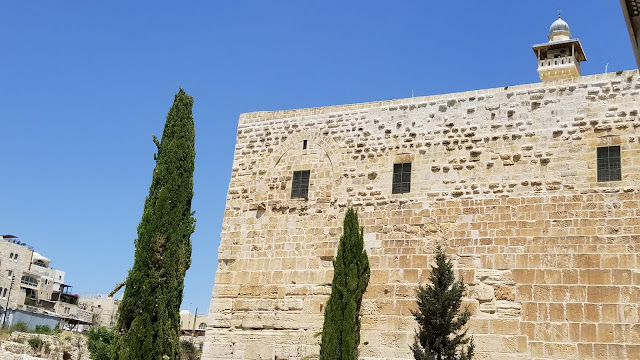 After we passed through the remains of the Ummayad Palaces below the al Aqsa Mosque, we came to the area of steps that comprised the main entrance to the temple for the common people. Miqva`ot (ritual baths) have been discovered that were used to cleanse worshipers before entering the temple. A double and triple gate constituted the entrances and exits. The steps alternated shallow and deep, causing worshipers to ascend "with reverent steps and slow." Sitting upon the steps, we listened to Victor explain some of the historical aspects of the site, as well as the modern anecdote that John Glen when visiting this site said that walking here was greater to him than walking on the moon.

We then had a short, but meaningful, devotional. After reviewing that this was one of the few places where we can say "we walked where Jesus walked" (as opposed to walking twenty or more feet above where he walked!), I wondered allowed what we could learn from ancient practice as we tried to be more mindful and reverent in our own, modern temple worship. We sang "We Love Thy House O Lord" and then had some free time for pictures. 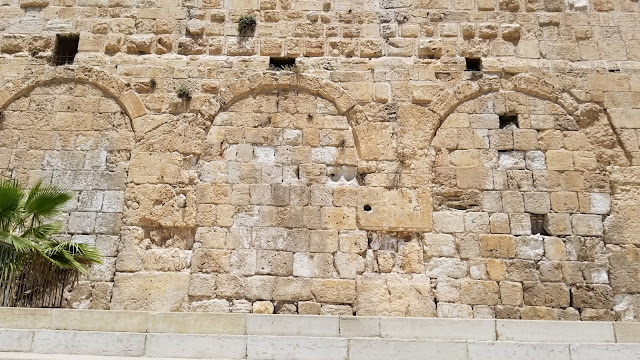 After a break for shopping at Jimmy's Olive Wood Bazaar and lunch at the Philadelphia Restaurant in East Jerusalem north of the Old City, we drove back around the Qidron Valley, catching a sight of the BYU Jerusalem Center and the Orson Hyde Memorial Gardens as we passed.


We did not get video of the morning sites, so the following highlight collage is only of the afternoon sites that I describe below.


The Place of the Last Supper

We next visited the Cenacle, or Crusader building on the site of the traditional site of the Last Supper, and the Cenotaph of David's tomb underneath it before finding a quiet place where we could read the words of institution (Jesus' prayer on the bread and the wine) from Mark 14:22-25 and the Washing of Feet in John 13:1-15. We then sang "As I Have Loved You." 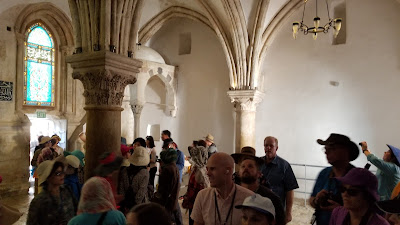 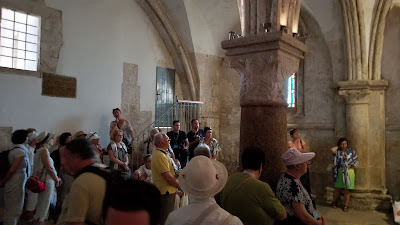 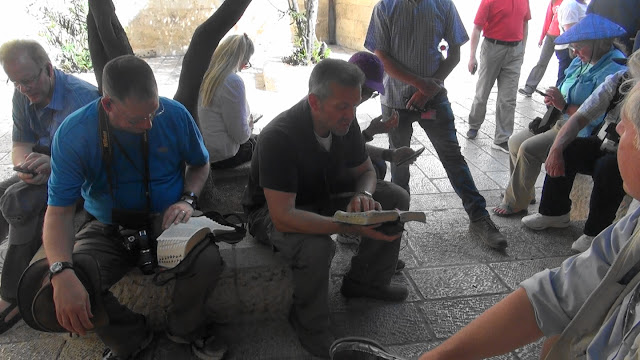 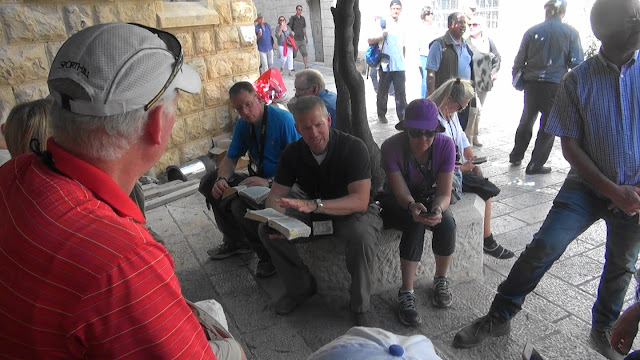 The Church of Peter in Gallicantu

Our final visit of the day was St. Peter in Gallicantu, or "Peter of the Cock Crow." This modern church is based upon the remains of a first century palatial house where later Byzantines venerated basement storage rooms and stables that they believer were used as the dungeon and torture places of Christ when he was brought before the high priest Caiaphas and then held there until he was delivered to Pilate the next morning. Because it also remembers Peter's threefold denial of Jesus, it is also a church that commemorates sin, repentance, and forgiveness. 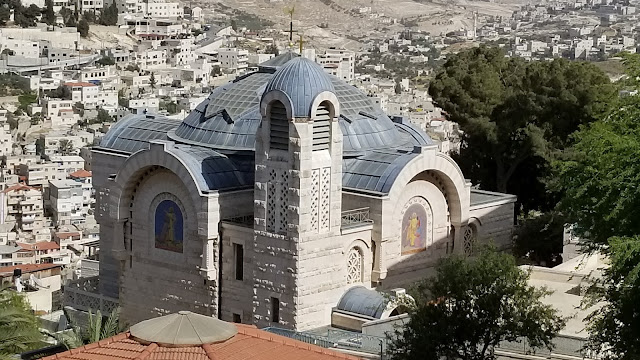 In the lowest level of the church, we waited our turn to descend into "the Sacred Pit" where pilgrims frequently recall Jesus' lonely period of waiting as he was being held for trial before Pilate the next morning. Here I read Psalm 88 to our group, after which we sang "Be Thou Humble."