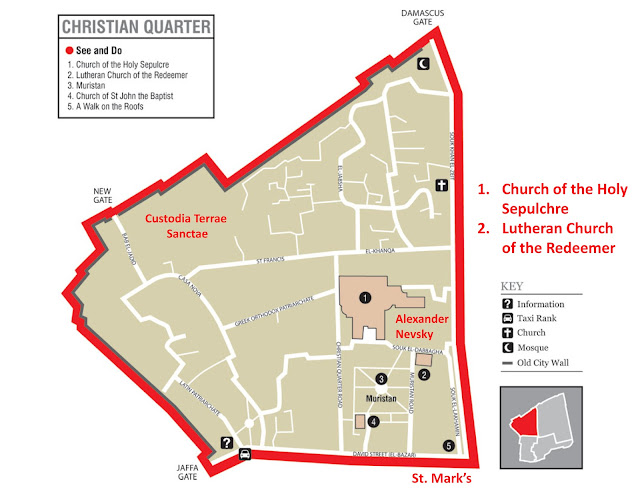 Our field trip to Christian sites in the Old City is always my favorite.  Sometimes it is called "The Christian Quarter" field trip because several of the sites are in the section of the city, but one of them St. Mark's, is in the Armenian Quarter, and as the students will see in our Last Week Walk, there are several important churches and Christian sites in the Muslim Quarter as well.  Further, though we did not go to see it today, the remains of the apse great Maria Theotokos Nea church are in the Jewish Quarter, and several important Christian churches still stand, and function, on Mount Zion and of course on the Mount of Olives.

This is because for over three hundred years, in so-called "Byzantine Jerusalem," this was a Christian city and a largely Christian land, a phase of the Holy Land often forgotten because of its long, earlier Israelite and Jewish phases before and its dominant Muslim (and briefly Crusader) periods after.

Yet while the indigenous Christian portion of the city's population is the smallest and continues to shrink, it continues to evidence considerable vitality, bolstered, of course, by millions of Christian pilgrims and a small but helpful ex patriate community of which I am proud to be a part.

Earlier blog posts of this same or related trips can be found at the following links: 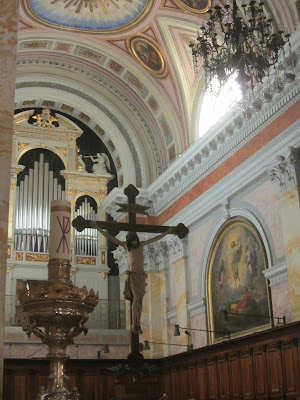 We started our half-day's tour by entering through New Gate, the gate on the northwest corner of the Old City.  This entrance provides quick access to Custodia Terrae Sancta, the important Roman Catholic complex in the Christian Quarter.  While the technical ecclesiastical head of the Roman Catholic Church in the Holy Land is the Latin patriarch, who has his own headquarters in the quarter, the Custodia complex is operated by the Franciscan Order, which since 1342 has had a papal mandate to operate and maintain Catholic holy sites in the Land.  Thus what Western Europeans failed to maintain by the sword (sc. the Crusades), they have instead operated through the peaceful Franciscan order, the Custodia Terrae Sanctae or "Custody of the Holy Land."

The main church of the Custodia is St. Savior's, whose tall roof and bell tower are a landmark in the Old City.  It is, by Jerusalem standards, a relatively new church. Built in the Baroque style, it has been renovated a few times in its history.  It serves not only the Franciscan brothers but also the local Arab parish.

After visiting this church and singing "All Creatures of Our God and King," we received a brief tour by Father Molina, who also took us to the tailor shop where habits for the order are made.  This oldest section of the Custody used to be a hostel for Christian pilgrims, and it is believed that LDS pilgrim Orson Hyde stayed here, perhaps carving his name into the wood of a door frame like so many other pilgrims. 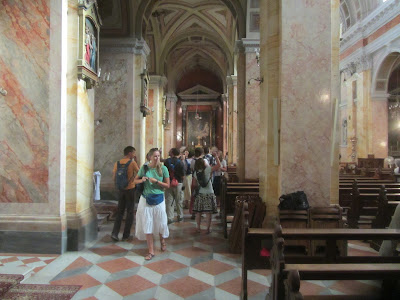 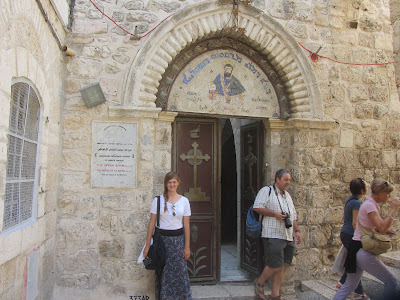 The small church of St. Mark's is the seat of the Syrian Orthodox archbishop of Jerusalem.  Despite its name, the Syrian Church is not part of the Eastern Orthodox communion.  Rather it is an independent Eastern or "Oriental" church, together with the Copts in Egypt, the Armenians, and other ancient communities that did not accept the Council of Chalcedon (A.D. 451).  They believe that their church was built on the site of the home of Mary the mother of John Mark (the traditional author of the gospel of Mark).  If they are correct, then this would be site of the Last Supper, though the Byzantines and the Greek Orthodox and Catholics since maintain that this was instead on Mount Zion on the site of the current Cenacle. Many of them still speak Aramaic, the language spoken by Jesus and his first disciples. 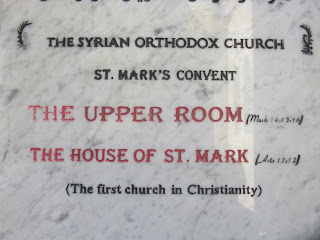 As on previous occasions, we were hosted by Sister Justina, an Iraqi Christian who left her home and her home and career as a math teacher to come to Jerusalem to serve in what the Syrian Orthodox believe is the first church in Christianity, the place where the Last Supper was held and then where the Holy Spirit descended upon the church at Pentecost.  She told us the history of the church, shared stories of miracles that had occurred there, and sang Psalm 150 in Aramaic.  She invited me to take single picture of the altar, something that is usually not permitted, and then let us go "to the church down," the basement room that contains the remnants of what the Syrians believe was Mary' house.  There we read from Mark 14 and Acts 2 and sang.

Most Russian sites in Jerusalem are either on the Mount of Olives or in the so-called Russian Compound in the New City right next to Mea She'arim.  But in the mid nineteenth century the imperial Russian government bought a prime piece of property in the Old City near the Holy Sepulchre.  Planning as a hostel for Russian pilgrims, they began construction, only to find significant archaeological remains.  These are preserved below and to the east of the sanctuary that they eventually built here as part of a larger complex.  This church is named after the Russian saint Alexander Nevsky, the patron of the Czar Alexander who was ruling Russia at the time.

These remains included the triumphal gateway into the Temple of Venus complex built in A.D. 135 by the emperor Hadrian when he re-built Jerusalem as a Roman city. It is believed that the Venus temple was built here to coopt  the holy site of the Christians, namely where they had been commemorating the crucifixion and resurrection of Jesus.  Nearby are the remnants of the earlier Herodian Wall,  giving evidence for where the course of the wall was in the time of Jesus.  In this wall are the remnants of a city gate, called The Gate of Judgment and believed to be the one through which Jesus passed on his way to Jerusalem.  Just to the side of the gateway is a narrow slot that some have tried to argue is the "Eye of the Needle" to which Jesus referred in the Synoptic story of the Rich Young Man.  While this might be possible, see this link for a philological and historical discussion of the expression. All of these remnants support the traditional claim of the Holy Sepulchre to be the site at least of the crucifixion, and the original church complex built by Constantine extended at least this far. 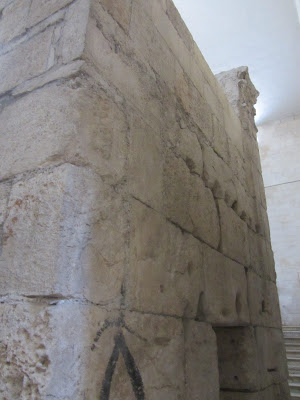 Hanging above the sanctuary of Alexander Nevsky is a beautiful series of passion paintings executed by by Russian artist Nikolay Koshelev.  If you like the work of Danish Carl Bloch, you will love these paintings, even if my pictures of them are not the best.  I only got shots of a handful of the some-18 paintings that illustrate the story from Gethsemane to Resurrection.

I have blogged extensively about the Holy Sepulchre before. See any of the following for descriptions of the site, maps, diagrams, and  discussions of its relative strengths and weaknesses as the place of Jesus' crucifixion and probably his burial and resurrection: The Citadel "of David,"  A Sunday in Jerusalem, Christian Jerusalem, Winter 2012, More Bruce and Vivienne in Jerusalem.

The students had all been here before, on their orientation walk their first full day here and other times on their own.  But I was glad I could tell them a bit more of the history of the church, and in particular, draw their attention to what I feel is one of the most sacred parts of this building: a quiet place in the side aisle where one can see an exposed section of the Rock of Golgotha, otherwise covered by altars and chapels.  Here, I shared with them, is where Jesus very probably was crucified, and whether it happened here, at Gordon's Calvary near the Garden Tomb, or somewhere else, I know and am sure that Jesus died for us.

I also took them into the small chapel of Saints Joseph of Arimathea and Nicodemus, off of which a small passageway reveals some first century kokhim tombs of the very type in which Jesus' body may have been laid.

During the Crusader Period, the area all around the Holy Sepulchre was occupied by Western European churches and complexes.  Among them was the compound of the Order of St. John Hospitaler, which provided lodging and hospital care for pilgrims.  Their church, St. Mary of the Latins, was also in this area.  The current name, "Muristan," is Persian for hospital and recalls what used to be here.  St. Mary's of the Latins was destroyed, but part of the complex, a monastic cloister,  is preserved next to the relatively new Lutheran Church of the Redeemer.  Off of this complex is St. John's chapel, the home of the English-speaking congregation, where Rachel and I have frequently attended. 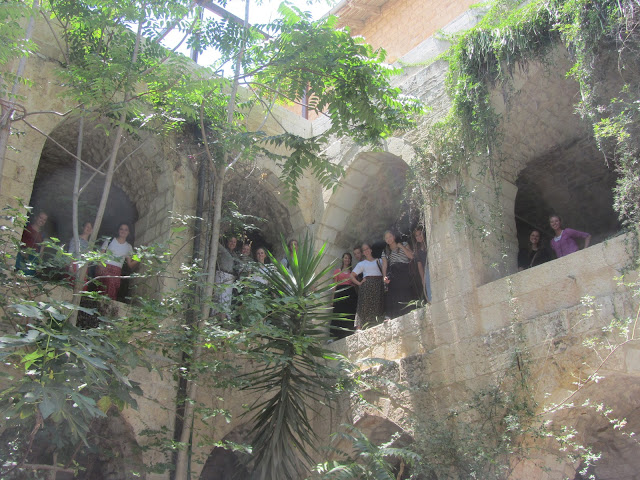