Today is Yom HaZikaron laShoah ve-laG'vurah, or "Holocaust and Heroism Remembrance Day" (the "Heroism" part was added in 1983 to honor the resistance of those in the Warsaw Ghetto Uprising and elsewhere).

In Israel, this solemn day begins the night before with a formal ceremony at the Warsaw Ghetto Plaza at Yad VaShem.  It is a national remembrance day, not an official holiday, so school and many other regular activities go on today.  But restaurants and public entertainment (including almost all television programs) are closed by law.

Stirringly, a siren goes off at 10:00 a.m., and for two minutes most Jewish Israelis (except for the Haredim or "ultra Orthodox" who remember the losses of the Holocaust on other days, such as traditional mourning days like Tisha b'Av) stop whatever they are doing, even driving, and stand in honor of the dead. 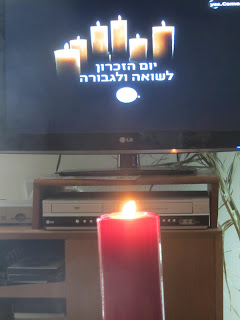 It was a stirring thing to join this commemoration at 10:00 today, standing on the deck of our apartment as the sirens went off.  Here in East Jerusalem not many stopped during the sirens, but I wanted to observe the two minutes of silence and light a candle in honor of the dead as is traditional.

Events like this remind me of the importance of honoring the life and dignity of all people and the need to fight injustice always, everywhere.  And, as always, I am stirred to pray for peace, security, justice, and prosperity for this land I love and both of its peoples.