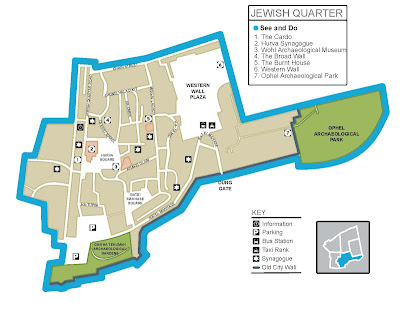 Today's field trip was officially called "The Jewish Quarter Field Trip," and last semester we called it "New Testament Jerusalem."  The sites were all now found in the Jewish Quarter, hence its name on this semester's calendar," but I prefer "Herodian Jerusalem," because both the remains of the private houses that we saw first and then then the remains around the base of the Temple Mount that we saw last are all very representative of the kind of architecture and society initiated under Herod's rule.

When the Arab Legion of Jordan captured the Old City in 1948, it expelled the residents of the Jewish Quarter.  Subsequently the quarter's synagogues and many of its homes and other buildings were destroyed and left in ruins.  Consequently, when Israel took control of the Old City in 1967, it was provided with a unique opportunity.  Before it engaged on the intense project of rebuilding the Jewish quarter, it allowed archaeologists to first excavate the area, revealing the cities that lay under it, including and especially that of the Herodian Period.

The first museum we visited was the so-called "Burnt House,"  a subterranean museum (meaning it is built well under the current level of the Jewish quarter) that features a single, wealthy home that was burned in the Roman destruction of Jerusalem in A.D. 70.  The museum not only exhibits the remains of the house's cellar and artifacts, it also shows a movie that dramatizes the life of the home's last owners, the priestly Kathros family and tries to depict the divisions in Jewish society that contributed to the city's fall. 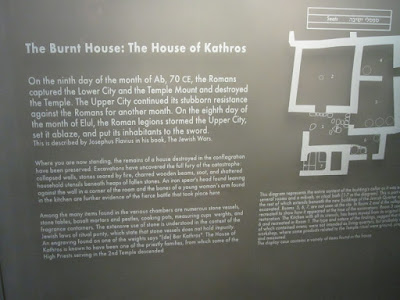 We then took the students to the Wohl Museum, a larger museum that actually includes the remains of several large Herodian-era mansions. 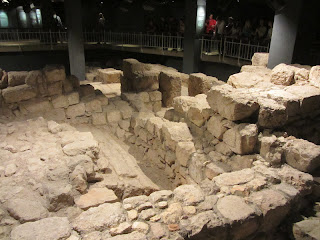 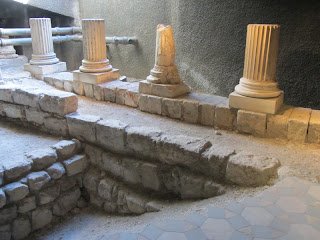 The final, and main, objective of the trip was the Davidson Archaeological Museum. After watching a movie about the temple in this period and looking at some of the museum proper's collection, we went out around the southwestern corner of the Temple Mount.

Along the western side of the mount, the dig has taken the level down to the level of the Herodian Street: now we can say that were were not walking "above where Jesus walked" but where he actually walked.  We were able to talk a lot with the students about the construction of the massive Herodian retaining wall, look at the giant stones that the Romans pushed off the mount when they burned the temple proper, and check out miqveh baths and shops, all of which testified of the busy pilgrimage industry in that period.

Perched on large Herodian Stones that the Romans rolled off the platform when they destroyed the temple, we read all of Mark 13, which includes Jesus' prophecy of the temple and city's destruction and looks forward to his return.  This led me to also read the stirring eschatological passage in 1 Thessalonians 4:13-18.  This all went well with what many of us had read yesterday for the Tuesday of Holy Week, so we followed it by singing "Jehovah, Lord of Heaven and Earth" again, as some of us did on the Mount of Olives yesterday. 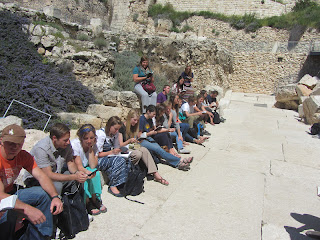 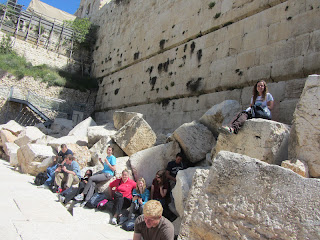 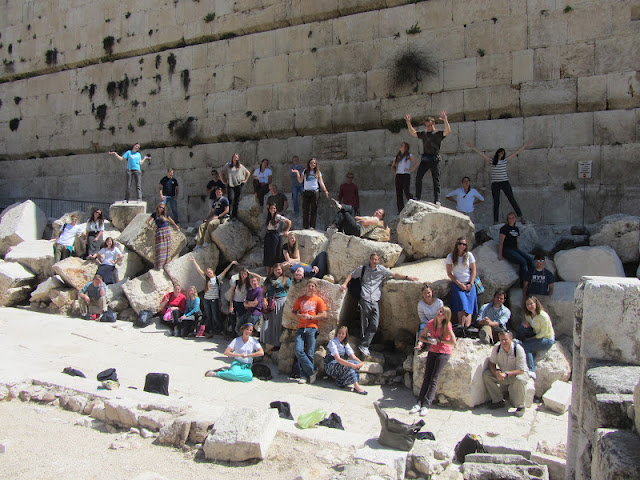 Along the southern edge of the mount, many Byzantine houses and then Ummayad palaces were built, sometimes right against the retaining wall.  However, part of the original wall is still exposed, where one can see part of the Double Gate and all of the Triple Gates.  Known as the "Huldah Gates" in the Second Temple Period, these gates, now blocked, gave access to tunnels that brought pilgrims up to the level of the Temple platform and allowed them to exit. 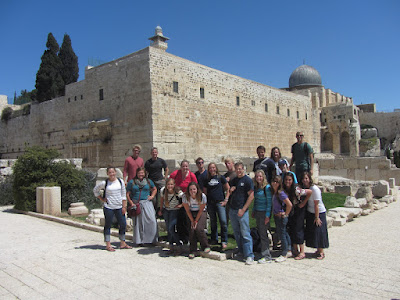 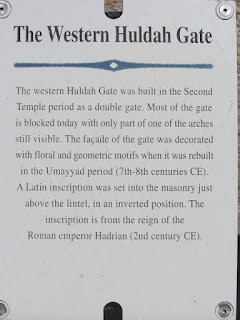 Sitting on the steps in front of the partially exposed Double Gate, where some of the steps were original Second Temple Period stones, we talked about the importance of temples.  I bore my testimony of the importance of temples to me and how they had been a place of revelation and strength to me.  We then sang, "We Love Thy House, O God" and "I Love to See the Temple." 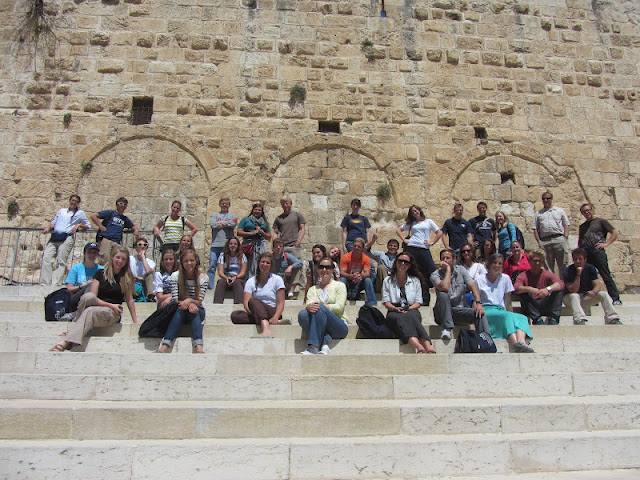