Today's last week walk was actually a last hours walk.  We began in Gethsemane (Holy Thursday) and ended in the Garden Tomb, where we commemorated the crucifixion (Good Friday) and the resurrection (Easter Sunday).  Several students commented that this set the seal on what they had studied, learned, and felt these last two months.  It all culminating and experience Holy Week here in Jerusalem two weeks ago, studying the Passion and Resurrection Narratives through last week, and then walking through the sites together these last two days.

As I mentioned yesterday, as a teacher I have been rewarded by hearing my students read, teach, and witness at each of these sites rather than being the one doing all the talking. 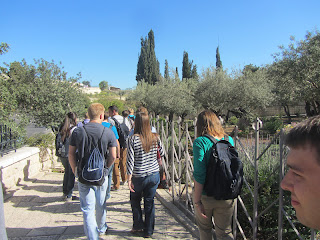 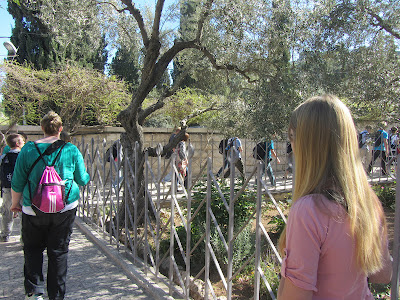 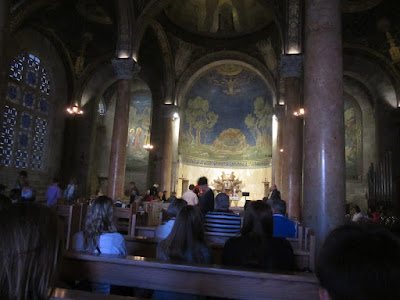 Qidron Valley Walk
We walked through the Qidron (often spelled "Kidron" or, in the KJV, "Cedron") Valley on our way to Mount Zion and the Church of St. Peter in Gallicantu.  Walking this same route with Elaine in Maundy Thursday candlelight procession really made me rethink this walk.  In the past, we have hurried to get from Point A (Gethsemane) to Point B (St. Peter's).  But today we stopped at the bottom and talked about how it would have been for Jesus to have been arrested and then escorted/dragged through this valley on the way to a night full of abuse and show trials. 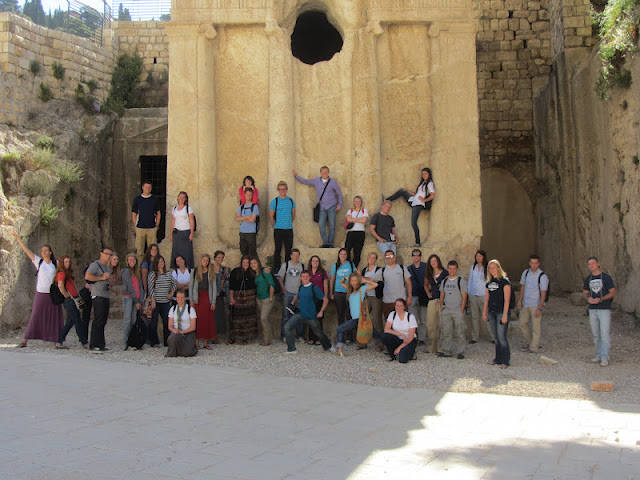 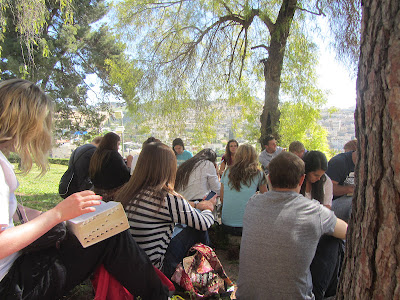 The Praetorium?
There is an ongoing debate as to the location of the praetorium, or Roman headquarters, at the time of Jesus.  Later Christian tradition put it at the site of the former Fortress Antonia next to the temple because a Roman garrison had been located there.  But ancient sources actually suggest that when Herod's kingdom was converted into a Roman province in A.D. 6, his palace on the west side of the city became the governor's residence. When Jesus was sent to "Herod" (sc. Herod Antipas) in Luke 23:7-11, Luke never uses the word "palace."  Antipas would not have had possession of his father's former royal residence, and some have suggested perhaps he would have been in the former Hasmonean palace mid-city.

I incline strongly to this position, so I walked to our next sites by entering Zion's Gate, turning left, and walking through the Armenian Quarter to the Citadel or "Tower of David."  The walled but otherwise open Armenian lots to the south of the Citadel cover most of the same ground as Herod's once great palace.  The towers of the Citadel itself are built on the foundations of Herod's own great towers at the north of his palace.

Standing in front of the Citadel, I read passages from John 18 and 19 about Jesus before the Roman governor Pilate.  It seemed to add an element of historicity to the story that felt good.  We then walked Omar Ibn El-Khattab (David Street) to Muristan Road, passing just east of the Holy Sepulchre, perhaps following the actual route Jesus took to the cross, before heading on to the Via Dolorosa, the traditional route. 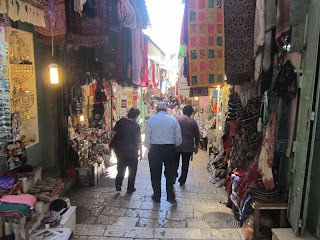 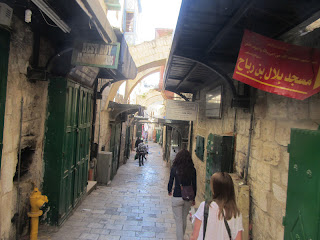 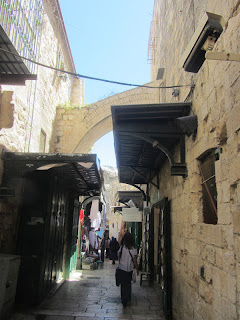 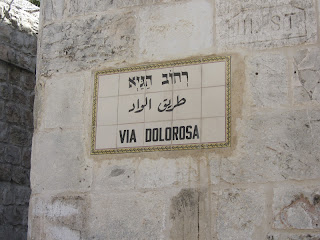 Church of the Flagellation 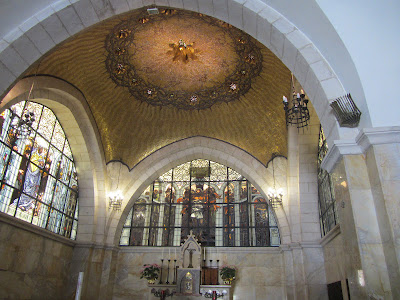 St. Anne's
Our visit to St. Anne's at the top of the Via Dolorosa near Lion's Gate is technically out of sequence.  t is built near the remains of the Pool of Bethesda as a replacement for the earlier Byzantine and Crusader churches that were actually built on the dam or causeway in the middle of the two pools.  But somehow recounting Jesus' role healing the Lame Man at the Pool of Bethseda from John 5 seemed appropriate.  In addition to the saving power of the atonement, we all need, and enjoy, its healing power.
Afterwards we joined the other class inside St. Anne's, where we did lots and lots of singing, which the students always enjoy. 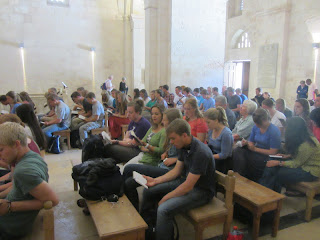 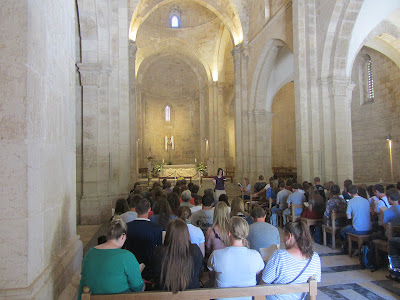 A Brief Beak
We ate our lunches on the grounds of St. Anne's and then had until 2:30 free.  After resting at St. Anne's  I joined some students on the roof of the Austrian Hospice so that they could get their last look at the Old City from that vantage point.  We then hurried out the Damascus Gate and up Nablus Road to the Garden Tomb.
Garden Tomb 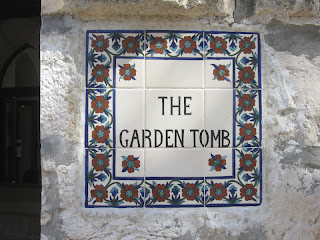 Our last stop was the Garden Tomb, which is a nice place to commemorate the crowning events of our Lord's life and atonement.
In addition to what I had scheduled (above) we had a nice greeting from Victor, the director of the board of governors of the Garden Tomb Association, who was visiting from London.  I also made some remarks after Bryson's reading and testimony, quoting 1 Corinthians 1:18, 21-23; 2:2 as well as Romans 5: 1-11. 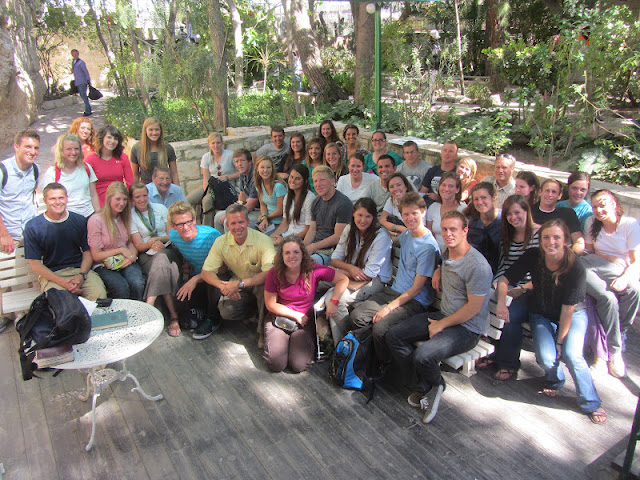 There were a fair number of tears by the end of our devotional.  Most of them came from the spirit, as people were moved by what Jesus has done for us.  But there was also the realization that they are leaving this place that they have grown to love so much.  I challenged the students to take the memories of the places and the things that they have felt home with them, to use it in their witnessing, in the raising of their families, and the rest of their lives. 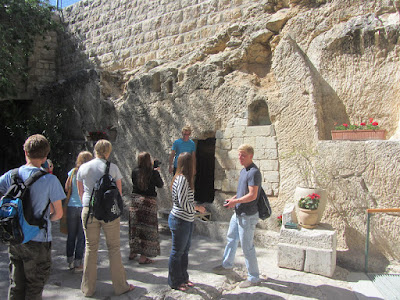