With Rachel on Good Friday

Today I had a once-in-a-lifetime opportunity to celebrate Good Friday (see this morning's post on readings and reflections) by taking my daughter into Jerusalem to commemorate our Lord's condemnation, crucifixion, and burial.  Here is a brief video tour of our activities: 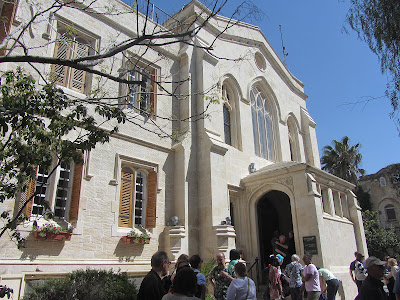 At 1:00, Rachel and I joined a Good Friday service at Christ Church, the oldest Protestant church in the Middle East.  It was built in 1849 and is interesting in that it still continues a Jewish outreach because of its affiliation with Church's Ministry among the Jewish People (CMJ).  It is a beautiful church in a lovely compound in the Christian Quarter, though its position is anomalous, being outside the jurisdiction of the Anglican bishop of Jerusalem whose see is St. Geroge's (where Rachel and I went on Palm Sunday).  Because of its CMJ history, some Hebrew is used in the service, as in the song Seh HaElohim today after the first reading, whereas at St. George's half the service was in Arabic.

Both of us really enjoyed the service, especially the readings (Isaiah 52-53, Psalm 22, and Mark 14) and all of the singing, which really focused on what Jesus did for us on the cross.  I tend to be a bit more high church in my inclinations, but this was a broad church service, which we enjoyed because I also like more evangelical worship, so this was a nice mix.


Visit to the Holy Sepulchre 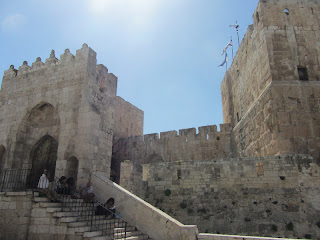 Coming out of the Christ Church compound, we took some pictures of the Citadel, also known as the Tower of David.  It is a fortress that was built, destroyed, and rebuilt over the centuries by Byzantines, Arabs, Crusaders, Mamluks, and most recently Ottoman Turks.  Significantly, however, it stands on the foundations of three great towers built by Herod the Great that protected the northern end of his palace complex.  What does this have to do with Good Friday?  It is because this was the most likely place for Jesus' trial, condemnation, and scourging, since the Roman governors took up residence in Herod's Palace and not in the Antonia Fortress, as has been held since the eighteenth century or so. 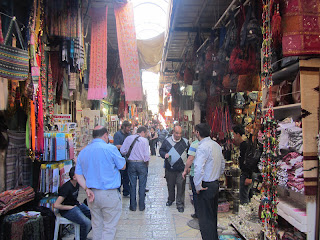 So walking from the Citadel through the shops of Christian Quarter Road to the Holy Sepulchre made us feel that we might be approximating the route taken by Jesus to his crucifixion even more than if we had been walking the traditional Via Dolorosa.

Coming into the Holy Sepulchre, we viewed exposed sections of the rocky outcropping that has been held to be the rock of Golgotha since the time of Constantine in the early fourth century.  We walked by the crowded Latin and Greek altars on top of the rock and then visited the Chapel of Adam underneath.  Here a window reveals a piece of the rock, along with a deep crack that was held to have split from the top where the cross was driven.  A medieval legend, or perhaps allegory, held that Adam's tomb lay under the rock so that our first Father was the first beneficiary of Jesus' blood. 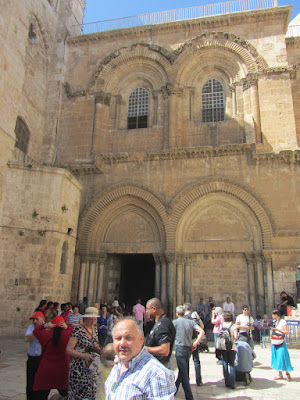 All this notwithstanding, when we went around to a larger and little-visited window in the aisle of the Church, I had some pretty powerful feelings, looking at this rock and realizing that on it, or one one like it somewhere nearby, Jesus was crucified.  Coming into the main entry area, we viewed the mosaics depicting the Deposition of Christ, the anointing of his body, and the burial.  In front of the anointing depiction is the so-called Anointing Stone, where devotees were quite intent.

We then left the crowded confines of the Holy Sepulchre, worked out way through the maze of the Muslim Quarter, and emerged from Damascus Date.  We then walked up Nablus Road to the Garden Tomb.  We love this special place.  Even though it has less to recommend it in terms of history, archaeology, and tradition, it is a place where one can better imagine events such as the crucifixion, burial, and resurrection.  It is preferred by some Protestants and many, if not most, Latter-day Saints.    We also are on good terms with the evangelical missionaries of the Garden Tomb Association.  Our students spend a lot of time here, and the staff are always friendly to us and our families, as they were today. 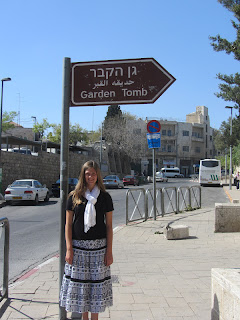 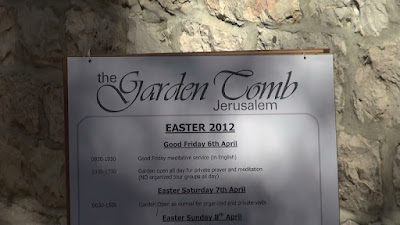 Today the Garden Tomb was open for personal reflection and meditation.  Rachel and I went up to the overlook in the corner where one can view the rock face that looks somewhat like a skull and which Charles Gordon identified as an alternative to the Golgotha in the Holy Sepulchre (hence "Gordon's Calvary").  Here Rachel read John 19:17-30. 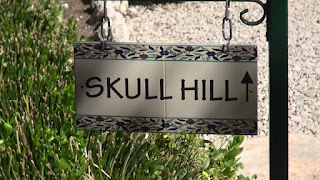 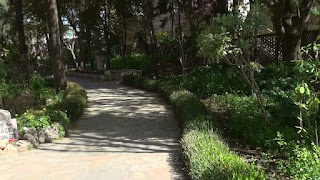 We then walked over and sat by the tomb, where we read the story of the burial in John 19:38-42.  It was a special time. 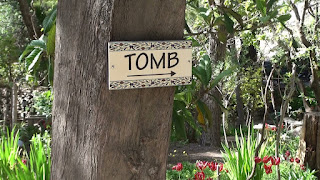 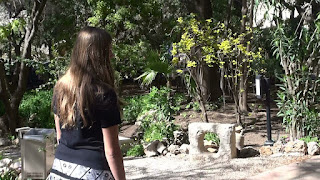