Yesterday we took our students on the most sobering field trip of their semester-long experience.  Getting in buses, we drove across Jerusalem to the western side, where we spent the morning at Yad VaShem, the official Israeli Holocaust museum and memorial.

The name means literally "a memorial and a name," and is taken from Isaiah 56:5, where the prophet tells those who do not have any earthly posterity to carry on their names that they will be remembered in the household of God: "Even unto them will I give in mine house and within my walls a place and a name better than of sons and of daughters: I will give them an everlasting name, that shall not be cut off."  Thus the objective of this museum and memorial (it really is both) is to make sure that the victims of Nazi genocide will not be forgotten or their names lost.

Because millions, literally millions, who died and were cremated in the extermination camps will never have graves, a mausoleum called the Hall of Remembrance has been built.  Inside a single eternal flame flickers, and the names of each of the concentration camps is written on the floor. 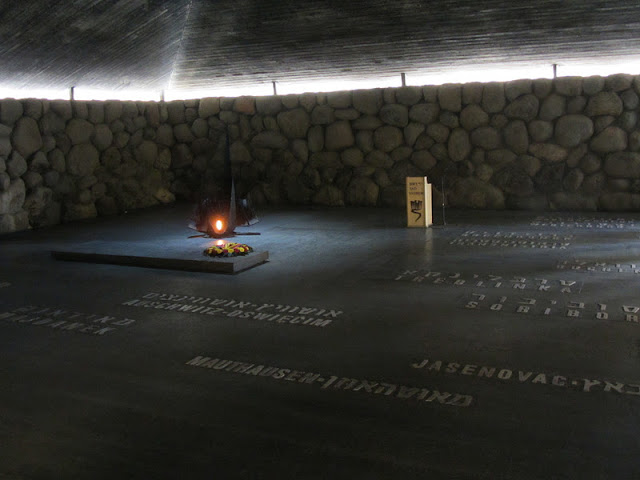 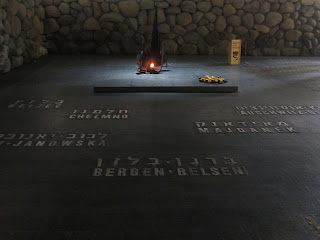 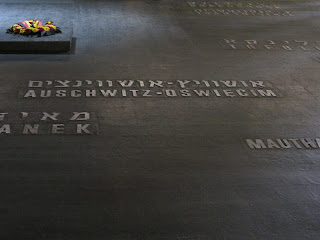 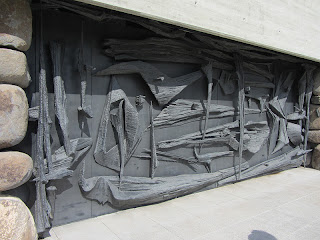 Pictures are not allowed inside the children's memorial, so other than a shot outside of the entrance, my description will need to suffice. One enters onto a catwalk suspended midway in a vast dark space and moves in a circular fashion between countless candles that represent the little lights that were unduly snuffed out.  Recalling that the promise to Abraham, Isaac, and Jacob was that their posterity would be like the stars of the sky makes the imagery of this heart-wrending memorial all the more poignant.  Elaine and I had been sobered by the Hall of Remembrance, but this was the first, but not the last time, that we both broke down. 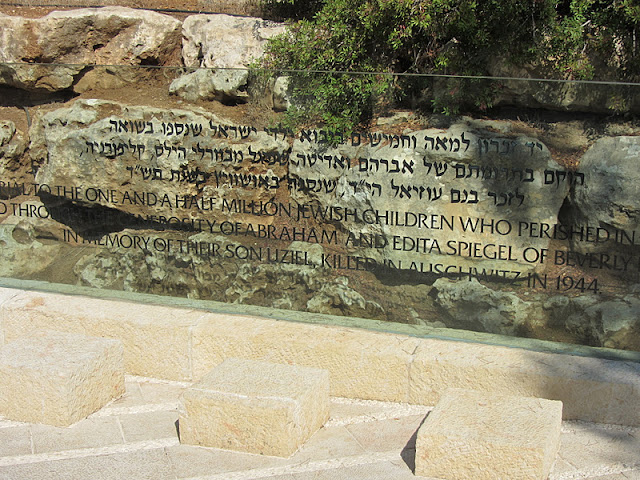 The museum proper is funnels visitors through a long, path that serpentines side-to-side along a long, subterranean passageway.  One has the feeling that he or she is being herded relentlessly through the museum, much as the victims were driven into ghettos, cattle cars, through camp gates, and to their fate.  The displays are comprehensive, overwhelmingly so: pre-war European Jewry, a world lost; the rise of the Nazis; early racist laws and pogroms; the attempts of so many to flee and the world's rejection of them; families torn apart; indignities inflicted; killing fields and forests; the ghettos; the extermination camps.

Towards the end one walks into the towering Hall of Names.  In a conical dome above appear names and pictures, almost like genealogical group sheets.  On floor-to-ceiling shelves on either side are volumes, hundreds if not thousands, of the names of the victims that have been compiled so far. 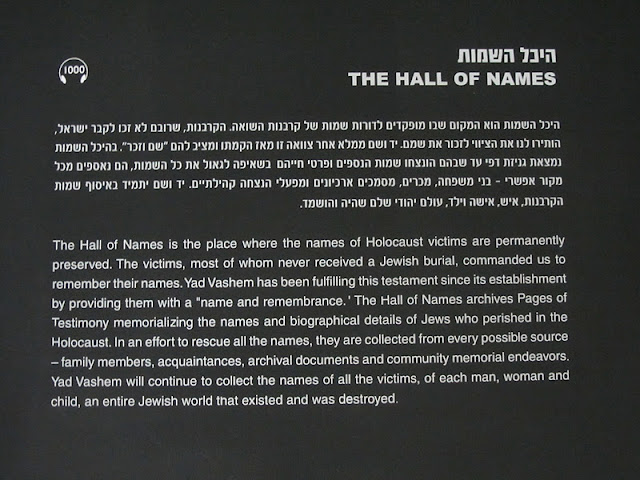 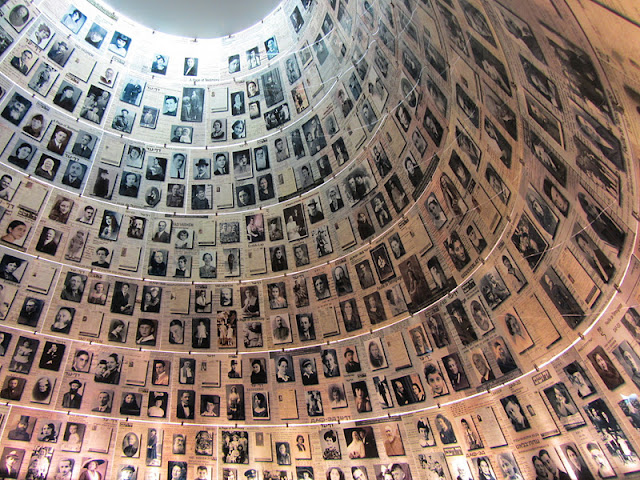 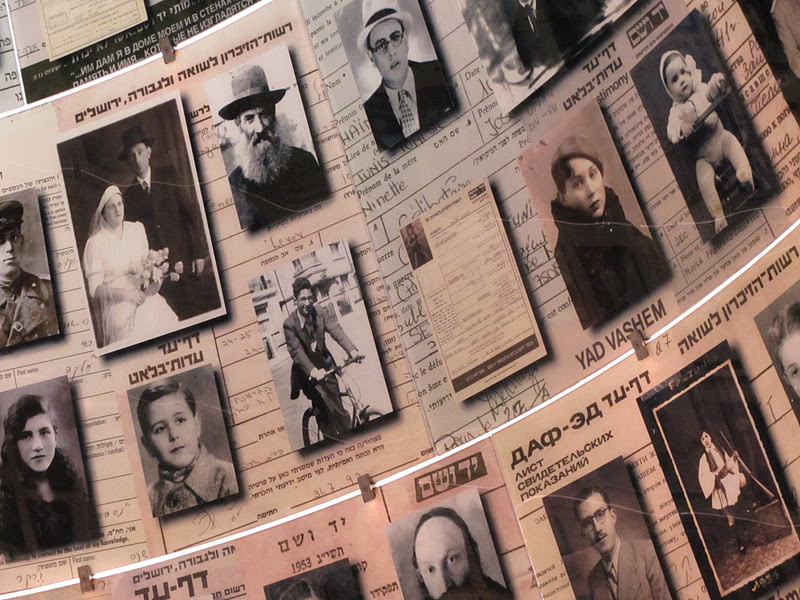 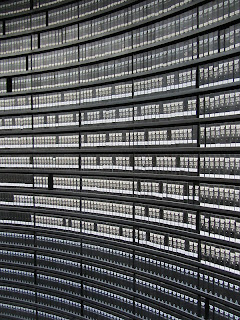 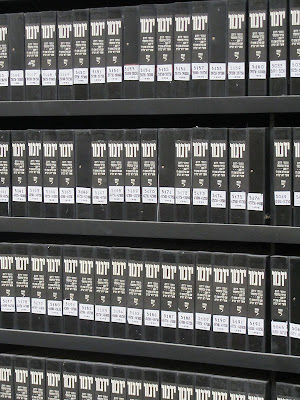 Yet despite all this, there are some glimmers of hope in Yad VaShem.  Towards the end of the museum, there are displays featuring "Righteous Gentiles," non-Jews who risked their lives to protect Jewish men, women, and children.  In addition to perhaps the most famous, Oskar Schindler, there were many others: a Greek couple who ferried Jewish friends to their small island and hit and fed them throughout the war; the Danish people who as a whole resisted the attempts to victimize Jewish Danes and then ferried them during the night to Sweden; and Bulgarian bishops and politicians who refused to give in to Nazi demands and saved most of their countrymen. 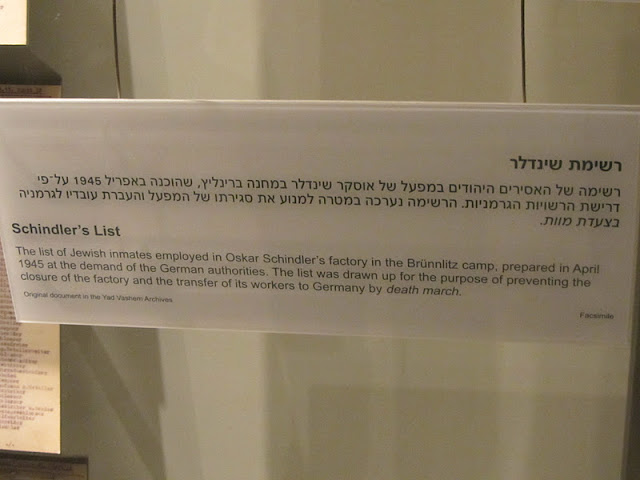 In addition, outside there is an Avenue of the Righteous, where a carab tree has been planted for each of those Gentiles who risked their lives to save others.  And when one exits the museum, one has a beautiful view of the Jerusalem Forest, a truly stunning, green, and living sight on the west side of the city.


We spent that afternoon on Mount Herzl, which serves as a national cemetery and memorial to the founders of Israel and many of its leaders since.  The Israeli military cemetery is also located here. 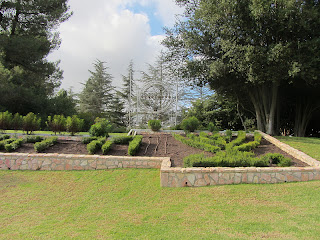 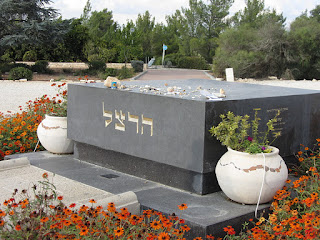 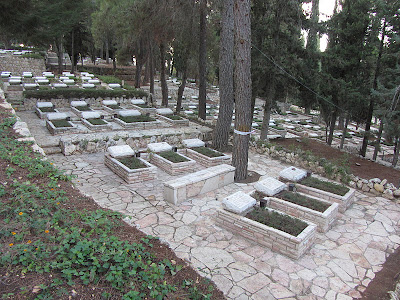