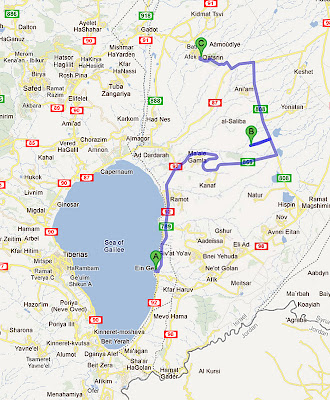 Galilee Day 4 (12/17/11): Yesterday my class stayed at the kibbutz, where we had three hours of class on the NT Gospels.  During the hours I was not teaching I prepped, read, graded essays, and, uncharacteristically for me, napped a bit!  The pace of the last three months is starting to catch up with me a bit.  In the evening we had a bonfire on the beach.

Today we had a half-day field trip that we called Galilean Judaism.  That is to distinguish it from the mostly Christian-focused, all-day trip we had Tuesday, though the two sites we went to this morning are more properly in the Golan rather than the Galilee.  Anciently this was the area of King Og of Bashan, that was later turned over to half the tribe of Manasseh.  In the NT period, this was part of the Kingdom of Herod called Gaulontis that became part of the tetrarchy of Herod Philip.

In relatively modern history, this region is called the Golan Heights and consists of some raised tablelands cut periodically by deep stream valleys that looms over the Israeli Galilee.  As a result it was  used by Syrian artillery to shell Israeli settlements in the Galilee and the Hula Valley that drains into the Sea of Galilee.  Taken by the Israelis in 1967 and held in 1973, this occupied territory has since been annexed.  Though I do not think any other countries recognize this annexation, some understand Israeli security interests on the plateau, and the very sites we visited today witness ancient Jewish presences here   As we drove across it we saw some military bases and several burnt out tanks and personnel carriers from the previous wars.

But it was in the period right after the New Testament and long before the current Golan disputes that interested us today.  Our first site, Gamla, started as a Seleucid fort but became an important Jewish city in the region by the time of the Jewish revolt of A.D. 66-72.  It took its name from is position, which clings to the side of a high ridge that looks like a 'camel's hump.'  When Josephus was commanding the Jewish rebels (this was before he surrendered to the Romans and became a historian), Gamla was besieged and then, in A.D. 67, taken and destroyed.  4,000 of its residents were killed in the city's sack and 5,000 others through themselves to their deaths off of the steep precipices that surround the site on two sides. 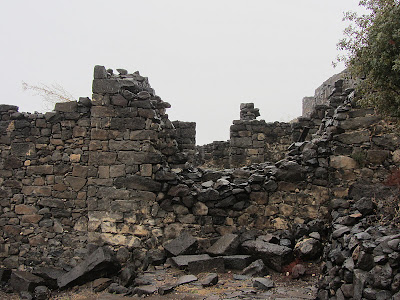 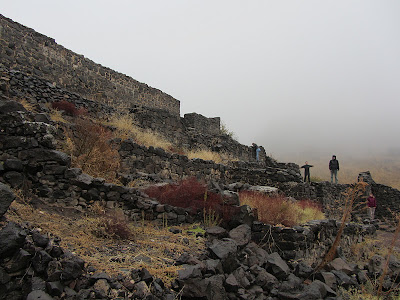 It was a rainy, foggy day, so we did not get all the spectacular views that this site often affords, though occasionally the mist would clear and we could see across the ravines to the other side.  But we did get to clamber through one of the earliest attested synagogues in the Holy Land and looked at miqvot (ritual baths) and other remains.  All though there is some question whether this site, that was never rebuilt after the Roman destruction, was the actual Gamla described by Josephus, Roman military equipment and other signs of destruction at the site make it clear that it was destroyed during the first Jewish Revolt. 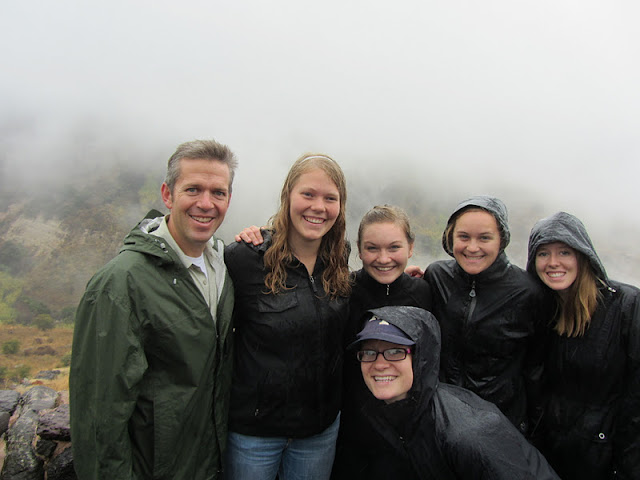 After the destruction of the Temple and Jerusalem in A.D. 70, Judaism moved into its early rabbinic phases.  The great sages known as the Tannaim worked to reforge Judaism without the Temple.  Their views and rulings, which were transmitted orally, were compiled and edited into the Mishna in A.D.  200.  At the beginning of this period, much of the focus of Jewish life remained in Judea, albeit without Jerusalem.  But in the latter part, the heart of Judaism shifted to the Galilee, and that is where the Golan comes back into the picture.  In addition to the great Jewish centers of Sepphoris and Tiberias in the Galilee proper, there were many Jewish communities in the Golan.

One of these was at the site now known as Qaztrin.  That was its name as a later Arab bedouin encampment; the original Jewish name is unknown.  But here the remains of a flourishing Talmudic community have been discovered.  The Talmud, which is comprised of the Mishna and an extensive commentary on it that developed in the centuries after A.D. 200 became, after the Torah itself, the heart of Jewish life and practice.  Qatzrin gives an idea of what that life was like in the Byzantine period.

We began by watching a somewhat cheesy movie with odd effects and editing about Talmudic sages, but it was important, I think, in helping our students understand what the rabbinic tradition was all about in these periods.  We then went through the ruins, which include one of the best preserved ancient synagogues and many domestic structures as well.