Tomorrow we hold our last Old Testament classes, Thursday our students have their exams, and then Friday we begin our study of the New Testament gospels!  Connected with that, this week's field trip was to Bethlehem and an archaeological site closely associated with it and Herod, the great antagonist of the Christmas story.


After leaving Jerusalem, our buses crossed into the West Bank and drove east and south of Bethlehem to a great fortress, palace, and tomb complex of Herod the Great called the Herodion.  At this site, Herod defeated his Hasmonean opponent, Antigonus, and his Parthian allies in 40 B.C.  To commemorate it, he built a massive fortress on a hill top here, as much to defend himself against revolts and his own people as to protect his realm from outside attack.

An entire neighboring hill was demolished to pile up earth around the fortress to form an artificial mound as extra protection.  From this site one has an excellent view in every direction: the Dead Sea and Jordan (ancient Moab) to the east, Jerusalem to the north (we could actually see the three towers of the Mt. of Olives), and Bethlehem itself to the northwest. 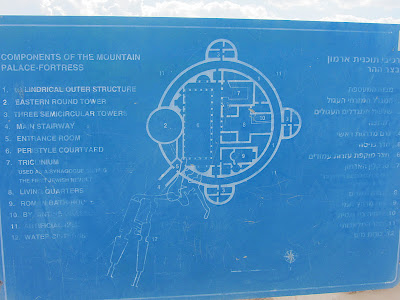 Upon his death, Herod was buried in a tomb in the side of the mound.  During two later Jewish Revolts against Rome, the rebels used the Herodion as a base.  Herod's tomb was ransacked, presumably by these rebels, who had no love for this infamous king.

Because Steve Harper and I will be exchanging classes Friday (he will take my OT students for NT, and I will get his), we actually took our "new" students on this field trip.  After my other colleague, Jared Ludlow, had acquainted them with the history and geography of the site from its top, I talked to them a bit more about Herod and then connected him to the Christmas story that we will begin studying next week.  Reviewing the story of the Magi, the flight of the Holy Family, and Herod's slaughter of the innocents, we looked out towards Bethlehem and sang, "Once in Royal David's City.

Here is a brief video clip that I shot of Matthew 2 and the Christmas story that I filmed later:

We then descended down into the center of the fortress to look at the ruins, which included a courtyard, a bathhouse, the royal apartments, and the triclinium or dining hall (later Jewish rebels turned this into a synagogue).  Here is the first group pic with Papa Hunts' new children: 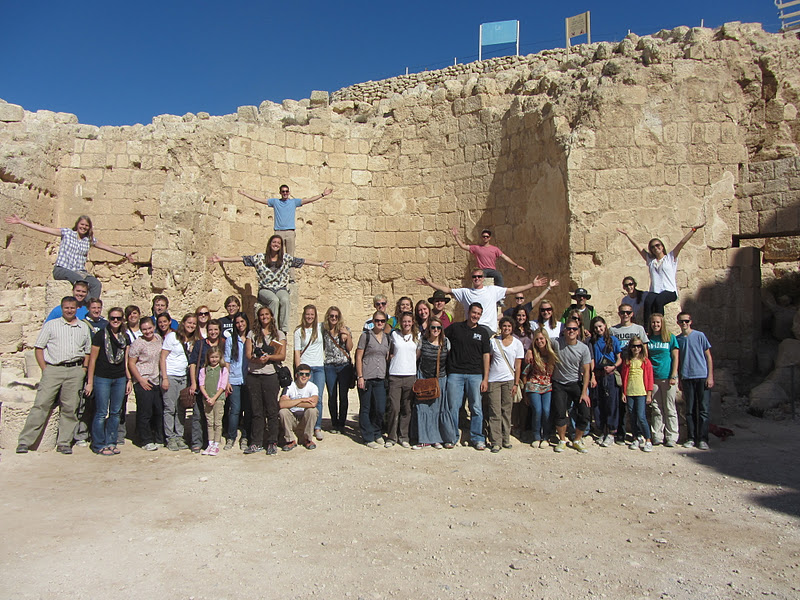 Here are a few other pictures of the palace ruins: 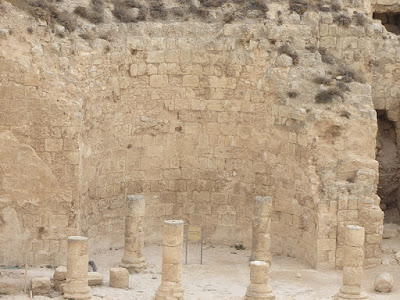 We then drove to Bethlehem University so that our students could hear a brief lecture about Palestinian higher education in the West Bank and so that they could have an opportunity to meet some of the students.  This university is a Catholic school, though over 70% of its students are Muslim. 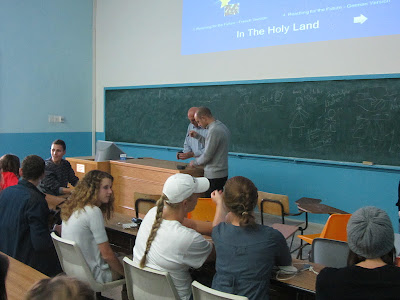 We then went to dinner in the famous "tent restaurant," where we enjoyed traditional Middle Eastern fare. 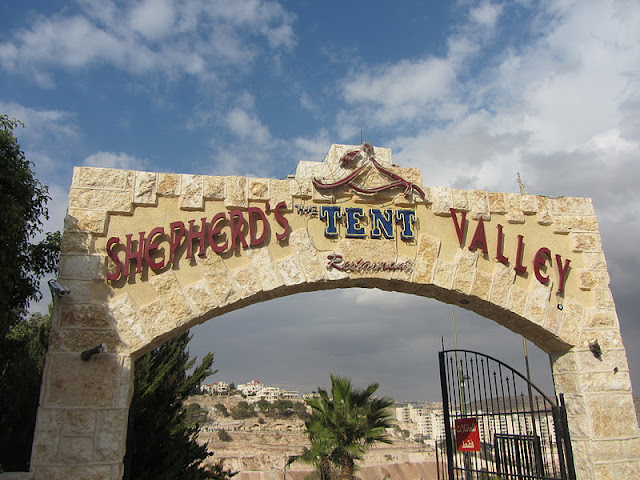 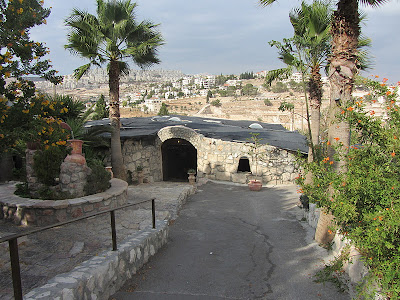 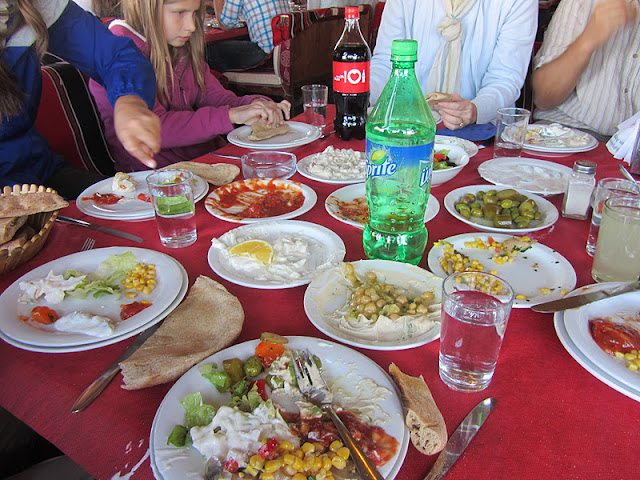 Of course our real objective in coming to Bethlehem was to better connect with the birth of Jesus, starting by visiting the traditional site of his birth.  The text of Luke 2 simply tells us that Mary placed her newborn son in a manger.  It is a deduction, though a reasonable one, that a manger would be in a stable or a place where animals were kept.  Early Christians placed this in one of the caves of the Bethlehem hill, so when Constantine's mother visited the Holy Land in the fourth century, she commissioned a church to be built over the cave that early tradition held was the scene of Jesus' birth.  Later the emperor Justinian built the current church on the same site in 540 A.D. 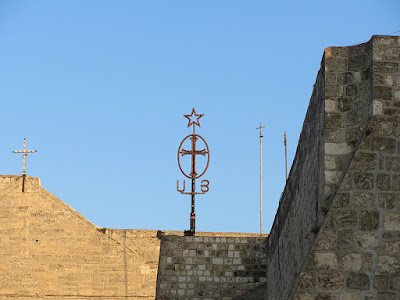 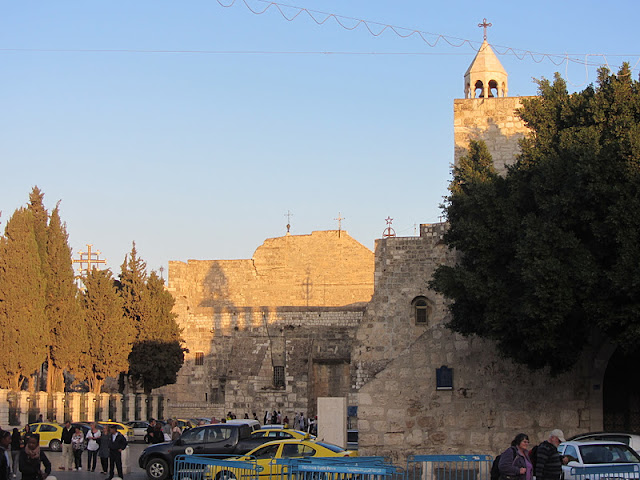 Under the altar of the basilica is a grotto with a star that marks the spot that, since that marks the spot that tradition holds was where Jesus was born.  Unfortunately, as often happens, the line to filed down into the grotto was over an hour long---almost the exact time we had at this site.  About half the students elected to wait in the line, and the other half went with me and my guide into St. Jerome;s grotto.  St. Jerome moved here in the late 300's and lived and worked in a branch of the same cave system.  Here, close to where it was believed Jesus was born, he hoped to be inspired as he translated the Bible into Latin. 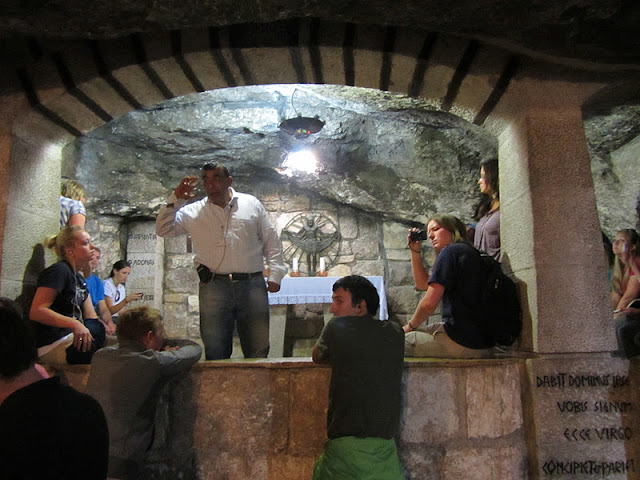 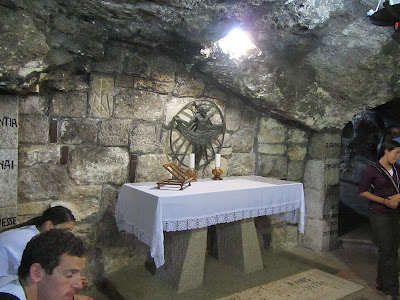 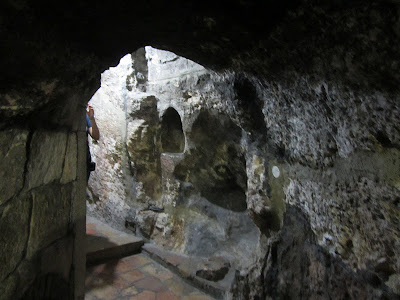 As a result, when we took my half of the students into the grotto, we were in the same cave system, and perhaps just as close to where Jesus may have been born.  But the real blessing was that rather than needing to quickly file past a star in the floor, we had plenty of time in a side chapel where we were able to sing Christmas carols and bear testimony to one another of the birth of Jesus Christ.  It was a very special time.

But perhaps the most moving part of our day was when we left Bethlehem and found an open spot on a hillside just north of Bethlehem that recreated well the scene described in Luke 2:8-14.  The place traditionally held to be where the angels appeared to the shepherds is now the site of Beit Sahour, a largely Christian Arab town due east of Bethlehem.  Although there are churches there that commemorate that event, the hillside we visited early this evening better allowed us to transport ourselves back to that first Christmas night.   After a prayer, Steve read from Matthew 1, after which I read from Luke 2.  We then sang carol after carol as the sun set.  At one point, a shepherd and a whole line of sheep passed behind us as we sang. 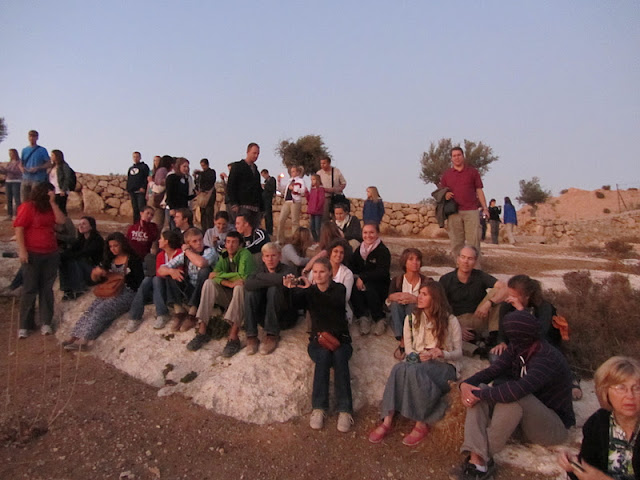 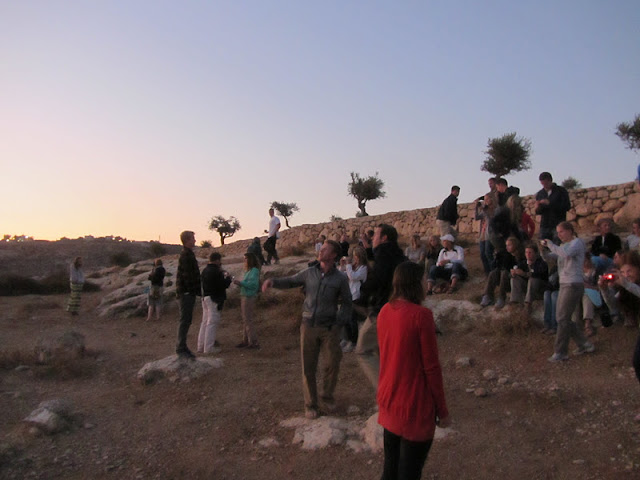 The video clip below is not great (the camera had difficulty focusing in the dark), and my wireless microphone was not working while Steve spoke, so I needed to cut that part.  But it gives you an idea of the experience we had tonight:


After we finished singing, we spread out over the hillside for fifteen minutes of quiet, personal reflection.
Posted by Eric D. Huntsman at 2:24 PM