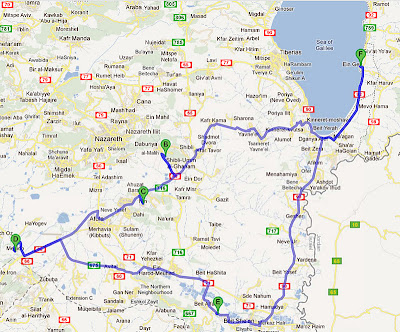 Eighth Day in Galilee (11/20/11): Today's field trip took us to some sites in the Jezreel Valley, which stretches from the Jordan River Valley northwestward to the Mediterranean just north of Haifa.  A very rich agricultural area, sometimes known as the "Breadbasket of Israel," it has also been very strategic, serving as a byway for empires and armies . . . and one day will again.

Today I got to take Rachel with me on the field trip, which I always enjoy.  Alas, one of the sure signs that my little girl has become a true teenager is that she spent more time with the students than with me!


The first site we stopped at was Mount Tabor, the traditional site of the Transfiguration, when Jesus was revealed in glory to his apostles Peter, James, and John.  The NT gospels do not give a precise location for the event, though the fact that in all three Synoptics it comes hard after Peter's declaration at Caesarea Philippi in the north has led many to assume that it occurred at Mt. Hermon, also in the north.  But because of a (mis)reading that "Jesus took them to a mountain apart," which probably means that he took them separately, this mountain, which stands "apart" or alone in the valley, has been seen as the scene of the transformation.


There have been a number of shrines on Mt. Tabor since Byzantine times.  The Byzantines, for instance, had three different chapels there, because at the Transfiguration Peter suggested that they build three tabernacles, one for Jesus, and one each for his otherworldly visitors, Moses and Elias (sc. Elijah).  Because of the strategic location of Mt. Tabor, armies have occupied it again and again, and the various churches here have been destroyed one after another.  The current church is one built by the Franciscans in 1924.  In addition to the main nave with its upper and lower chapels, there are two chapels in the back, one for Moses and one for Elijah. 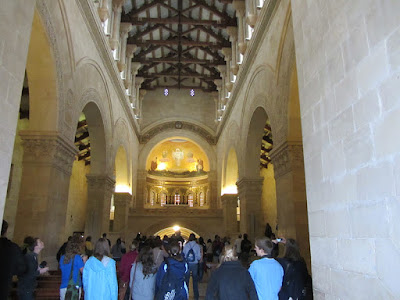 In addition to the church itself, there are overlooks with marvelous views of the Jezreel Valley.  We gathered in a private area to one side of the main church next to the ruins of earlier churches.  There we read all three Transfiguration accounts (Mark 9, Matt 17, and Luke 9), talked about their various emphases and messages, and mentioned the Restoration parallel of the Kirtland Temple 1836 appearances of Jesus, Moses, and Elijah.  This led to our singing "The Spirit of God" and "High on the Mountain Top." 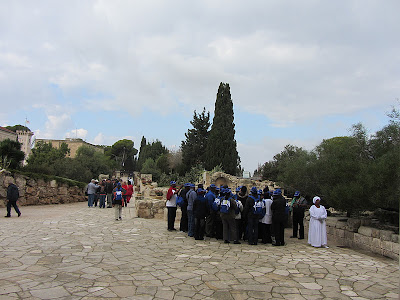 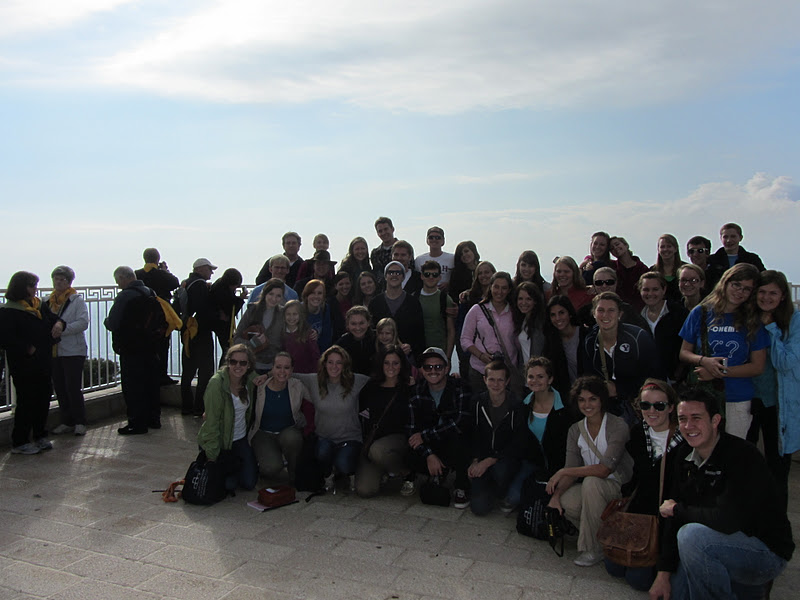 The custodian of the Church of the Transfiguration on Mt. Tabor is a wonderful Franciscan named Father Mario for Lebanon.  We have a fine relationship with him, and he drove down with us to the modern Arab village of Nein, which is the biblical Nain.  There he opened a small chapel, built in 1835, and allowed us to hold a devotional there.  We read the account of Jesus' raising of the son of the widow of Nain from Luke 7:11-17.  I then talked about the death of my father in 2004 and how it feels to lose a loved one and the hope that comes in Christ for the resurrection.  I spoke of the many other ways that Christ delivers us from grief, loss, and sin.  We then sang "Be Still My Soul" and "Though Deepening Trials."  The spirit was very strong as our students sang beautifully in that lovely little chapel.  Father Mario stood there with his eyes closed, clearly moved.  I then asked Margaret Ludlow to pray for us, after which we sat in silence for 10 minutes, each with his or her own thoughts.

Our next stop was Tel Megiddo, an archaeological mound, or "tell," that witnesses many levels of fortresses that have been built on this strategic spot from the Bronze Age up to about the third century B.C.  Controlling the Way of the Sea, which must pass through a pass in Mt. Carmel as it goes northward, and providing access to the central part of the Holy Land through the Jezreel Valley, Megiddo is vital for controlling the entire country.  David or Solomon captured it, and 1 Kings says that Solomon made it an administrative and military center, with many horses and chariots based here.  Most of the "stables" discovered here date from the divided monarchy, to the later northern Kingdom of Israel.

The name for the site in Hebrew is Har Megiddo, "Hill of Megiddo."  In Greek that is transliterated as Armageddon.  Alluded to in Zechariah 12 and Joel 3, is is most (in)famous from a reference in Revelation 16:16, that puts the last battle here. 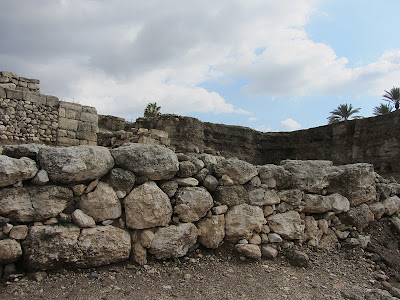 The every rainy "winter" weather that we have been having while here in the north treated us with dark, threatening clouds as we ended our time on Tel Megiddo.  Then, as we drove away, the rain began to fall in earnest.  That was too bad, because the plan had been to end the day with a visit to an Israeli National Park, Gan Ha-Shelosha, which features some natural springs.  Well, the students were anxious to go anyway, so they happily swam in the driving rain for over an hour!