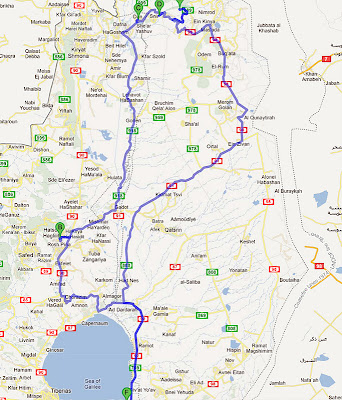 Galilee Day 9 (11/22/11): Today is what we call our "Upper Galilee" field trip.  The left side of the Sea of Galilee is known as Lower Galilee, and the higher, hilly area beyond that is Western Galilee.  But north of both of those regions, stretching up to the borders of Lebanon and Syria, is the Upper Galilee.  Some of the sites that we visited today (Hazor, Dan) were actually primarily important for the Old Testament, though the headwaters of the Jordan at Dan allowed us to teach about New Testament topics.  Another, Caesarea Philippi, was the scene of Peter's famous declaration that Jesus was the Christ, and it is near Mt. Hermon, another possible site of the Transfiguration.  We then stopped at a fortress built by the Arabs to protect the approach to Damascus against the Crusaders (Nimrod's Fortress).

Here is the highlights video for the day:


The first site we visited today was Hazor, which is located some 10-15 miles north of the Sea of Galilee in a very strategic site that controlled the Via Maris, or "Way of the Sea" as it cut inland on its way to Syria and Mesopotamia.  As a result, it was a very important and powerful Canaanite city in the Bronze Age.  Joshua 11:11 claims that the Israelites "smote it and burned it with fire," but by the period of the judges it was once again independent and the seat of a strong Canaanite king.  This King Jabin was fought by Deborah and her commander Barak, who defeated and routed Jabin's commander Sisera (see Judges 4).  Later the Israelite woman Jael killed Sisera by driving tent pegs through his temples while he slept in husband's tent!  The site later became one of Solomon's "chariot cities," like Megiddo. 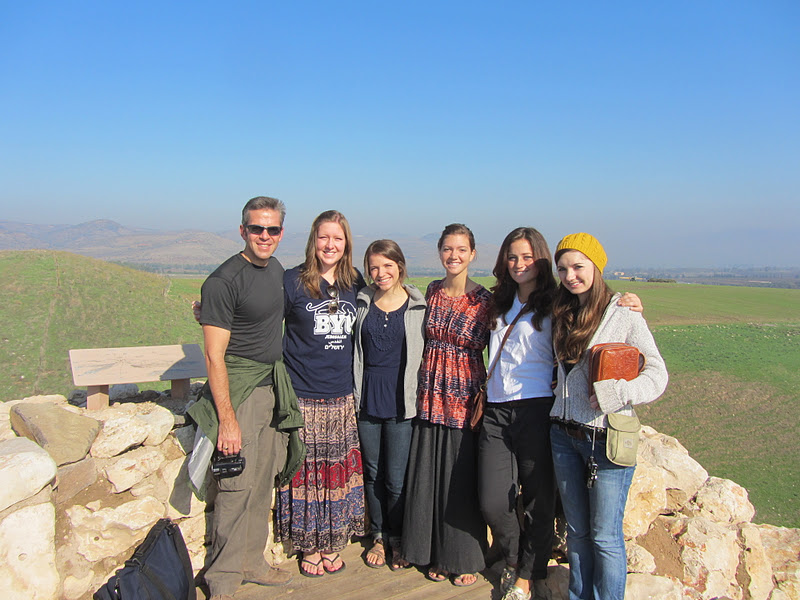 By the way, Michener fans will want to know that Hazor---its tell, its fortifications, and its water system---served as the basis of Tel Makor in Michener's great book The Source. This is a great book for those interested in the history and archaeology of the Holy Land.

After Hazor we traveled northward to Dan, a site that marked the northern border of Israel anciently and today.  Originally a Phoenician outpost called Laish, members of the tribe of Dan, who were hard-pressed by the Philistines in their original tribal allotment, migrated northwards and seized Laish, naming it after themselves.  Dan is on one of the three headwaters of the Jordan River, sporting a rushing stream that comes together from a series of natural spring in the area.  So before we went to look at the archaeological remains of Tel Dan, we first walked through the lush green forest and underbrush that fills the area around the springs.  This provided us a wonderful teaching opportunity to talk about “living water.”  Finding a teaching area in the forest, that reminded us strongly of the Sacred Grove, we talked about how we had seen many examples of “water gushing from rocks” during our walk through the forest.  I then read and taught from John 4, 7, and 19, noting passages where Christ represents a fountain of water springing up to everlasting life, streams of water flowing from the belly, or where blood and water flowed from his side on the cross.  We then sang “Rock of Ages.” 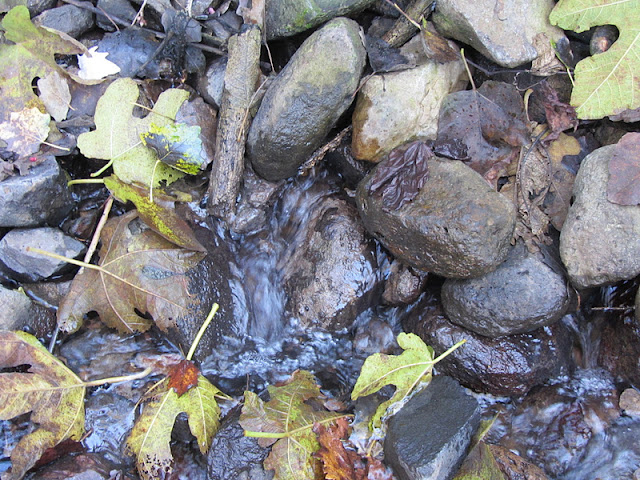 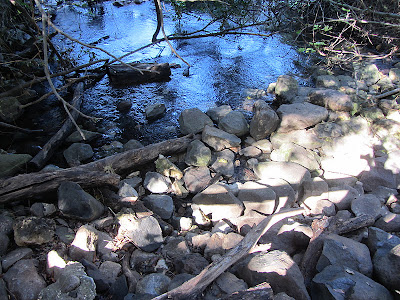 The site of Tel Dan itself contains very, very old ruins, including and especially a mud brick gate that dates back to the time of Abraham.  It also includes a “high place” or altar and precinct that began with Jeroboam’s setting up of golden calves at Dan and Bethel and continued through the Northern Kingdom.  This period also produced a great example of a six chambered fortified gate.

The top of the hill right above the high place at Dan sports the remains of modern trenches and fortifications because it lies on the pre-1967 border between Israel and Syria.  Lebanon, too, is almost visible, just beyond the line of hills to the west.  The border is more secure, as well as just farther away, since the 1967 War advanced Israeli occupation into the Golan Heights, which here stretches over and around this tiny Dan salient. 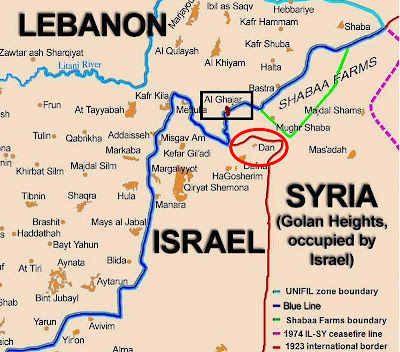 Most of what we now saw was Israeli-occupied territory, though we could see just across the valley to the left the disputed town of al-Ghajar.  A Syrian town in Israeli-occupied territory, the U.N. happily drew a border line through the middle of it, leaving the northern half of the town in Lebanon, even though none of the villagers want to be Lebanese, preferring to remain under Israeli-occupation so they can remain Syrian!  This is a complicated part of the world . . .


In fact, the rest of the day was spent in the Golan Heights, formerly Syrian territory that Israel feels that it needs to hold for security reasons.  The map above probably thrills Mother as she sees where her son has been so much of the day, especially with what is going on in Syria this day, as it suffers in the throes of the ongoing “Arab Spring.”  But everywhere we went today things were quiet, felt secure, and looked prosperous.  On of the interesting things we saw were the Druze villages and towns that we drove through.  They have a mix of Arab and Hebrew signs as Israeli-Arab/Palestinian towns like Nazareth do, but they are identifiable by their lack of minarets or churches. 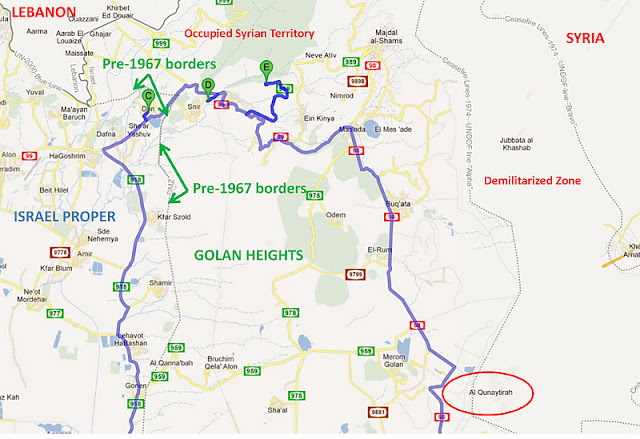 The current status quo allows people to see other sites that they normally might not, including one of the other headwaters of the Jordan River, which is a spring in a cave dedicated to a cave and forest deity that in the Hellenistic period was associated with the Greek god Pan.  It was thus called Paneas, which today is known as Banias (Arabic does not have a “p” sound).  The Roman emperor Augustus gave it to Herod the Great, who built a temple of Augustus in front of the Pan cave.  When he died, Paneas, and all of the Golan, fell to Herod’s son Philip, who renamed Paneas “Caesarea Philippi.”  This, then was the site where Jesus questioned Peter as to “who do men say that I am?” to which Peter responded with his famous declaration, “Christ, the Son of the living God” (Matthew 16:16).  Before we moved in to examine the site itself, we found a nice teaching area off to one side, where we read that account and asked what people say of Christ today and, more importantly, who we say he is.  We then sang “I Believe in Christ.” 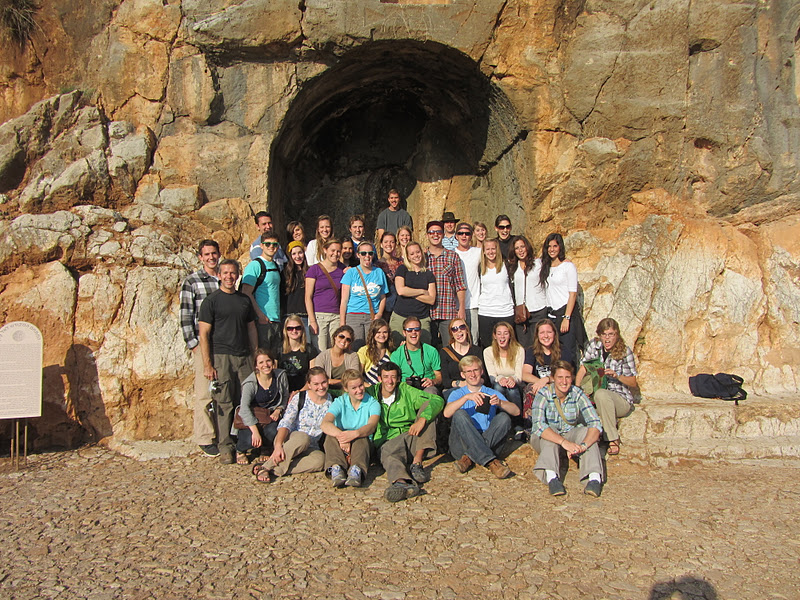 Not far downstream from Banias itself, this source of the Jordan River tumbles down some beautiful water falls.  Banias Falls, as it is called, is part of an Israeli nature reserve today. 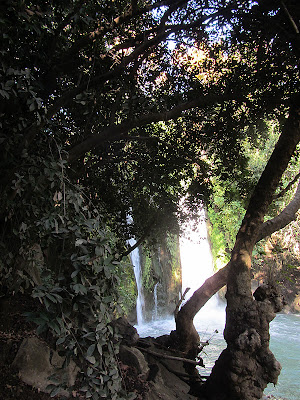 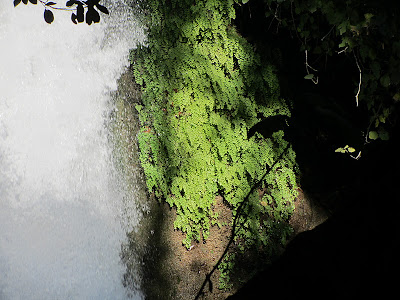 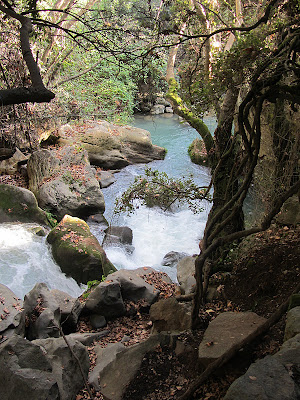 We then went to a Muslim fortress that was built during the Crusader-period to protect the approaches to Damascus from an expected Christian attack.  Although it is called the Nimrod Fortress, it has nothing to do with the mighty hunter mentioned in Genesis 10:8-9.  It does, however, provide stunning views of the surrounding territory, including the Hula River Valley to the west. 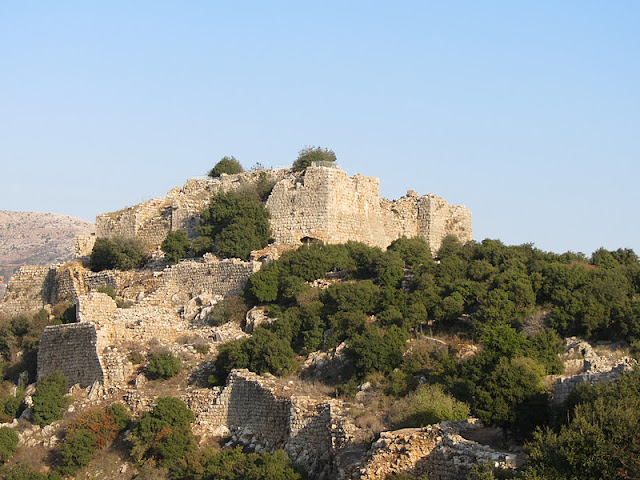 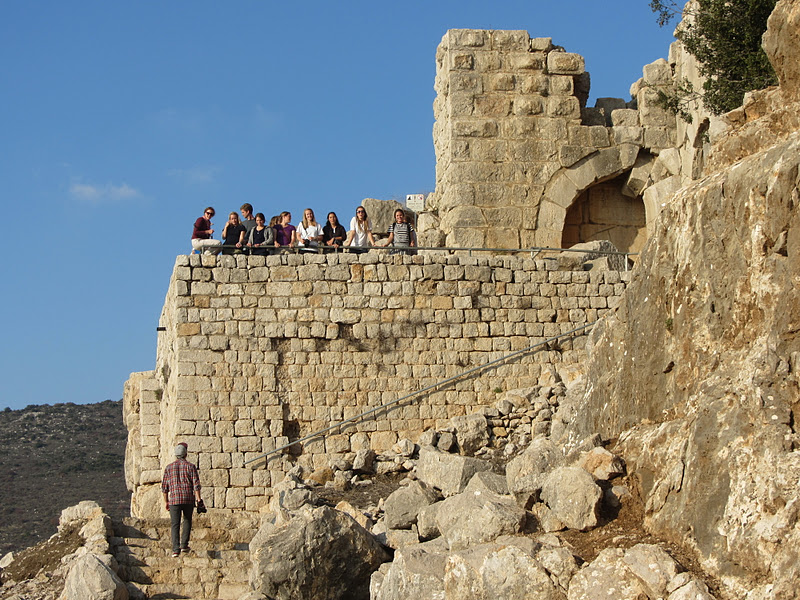 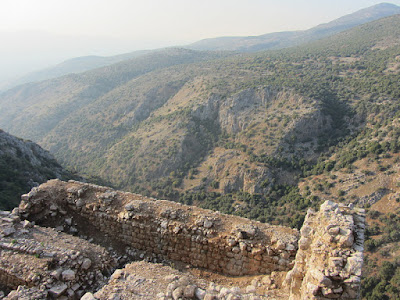 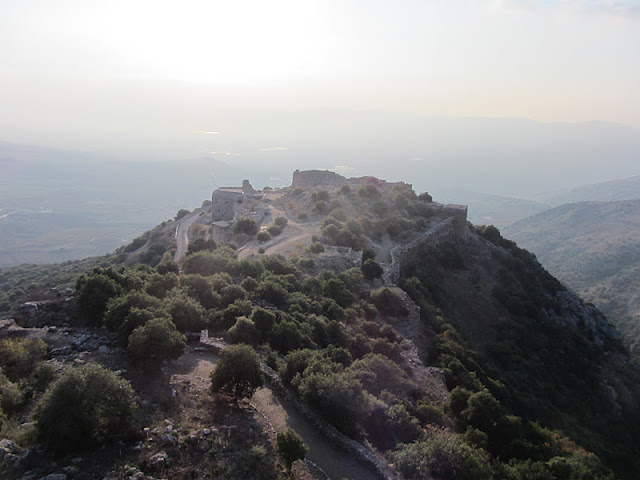 On the bus ride home we stopped at a sobering overlook off of the highway that let us look directly at the current Israeli-Syrian border, including a U.N. peace keeping force camp in the demilitarized zone that was directly below us.  In the distance we could see the ruins of Old Quneitra (circled in red in the map above), a Syrian city destroyed in 1967 and 1973 which has now been rebuilt on the other side of the border.

We came home from our long day of touring bone tired.  But after dinner there was still a bon fire on the beach where the students roasted us teachers.  A little skit had all of us stranded on a desert isle, discussing how we might escape.  The boys who played us got our mannerisms and idiosyncrasies down pat.  I must admit that it was pretty funny.