After our first night in Tel Aviv, we started our tour with our full complement.  My bus was full, every seat, with 51.  Both my driver and my "licensed guide" are named George, each being a Jerusalem Christian "of Arabic language."

Today we did a number of sites, ending up in Tiberias, the largest city on the Sea of Galilee.  After pretty good internet in Tel Aviv, I am back to having terrible connectivity.  Although I actually have internet in my room, it is uploading even slower than my hotel in Petra did.  I may only be able to do a text summary of the day, so please check again on next Monday or later, when we will be in Jerusalem, where I should have better internet.

I will try to upload at least a group photo from each site but more photos and a video summary collage will need to be posted later.


Caesarea was the port and capital that Herod the Great built on the coast. It was located on the earlier Phoenician seaport of Strato's Tower, but Herod built a whole new artificial tower and filled his new city, peopled mostly by Greek-speaking Gentiles, with all of the amenities of a Roman city of the day (see towards the end of this earlier post).  Later, after Judea and Samaria were converted into a Roman province, the Roman governor had his headquarters here, so this is where Paul was brought to be tried before Felix and then Festus.

In Caesarea, after we had watched a movie that portrayed the history of the site and had spent a little time at the theater, we walked through the archaeological garden into the area that was occupied by Herod's palace.  This was built on two levels, both extending out into the sea.  The upper tier consisted of the public and ceremonial rooms, while the lower, surrounded by the sea on three sides, comprised his luxurious private apartments.  It was there that we held our first devotional, reading the from Acts 26 and singing “I’ll Go Where You Want Me to Go.”

Muhraqa is the Arabic word for "sacrifice" and recalls the sacrificial contest between Elijah, prophet of YHWH, and the priests of Ba`al in 1 Kings 18.  It is located on the beautiful Mount Carmel, a long ridge actually, that juts northwest into the Mediterranean Sea, forming the bay that makes Haifa such a great port and which separates the Jezreel Valley from the Plain of Sharon to the south. The Carmelites, a Roman Catholic order that was formed here during the Crusades, built a monastery here which was restored when they returned in the seventeenth century.  In a tree-shaded spot on the grounds, we held a devotional in which we read the account from 1 Kings and then sang “Choose the Right,” playing off of the line “How long halt ye between two opinions?”

We then went up on the roof of the monastery to look out over the Jezreel Valley.

Our next stop was Tel Megiddo, an archaeological mound, or "tell," that witnesses many levels of fortresses that have been built on this strategic spot from the Bronze Age up to about the third century B.C.  Controlling the Way of the Sea, which must pass through a pass in Mt. Carmel as it goes northward, and providing access to the central part of the Holy Land through the Jezreel Valley, Megiddo is vital for controlling the entire country.  David or Solomon captured it, and 1 Kings says that Solomon made it an administrative and military center, with many horses and chariots based here.  Most of the "stables" discovered here date from the divided monarchy, to the later northern Kingdom of Israel. 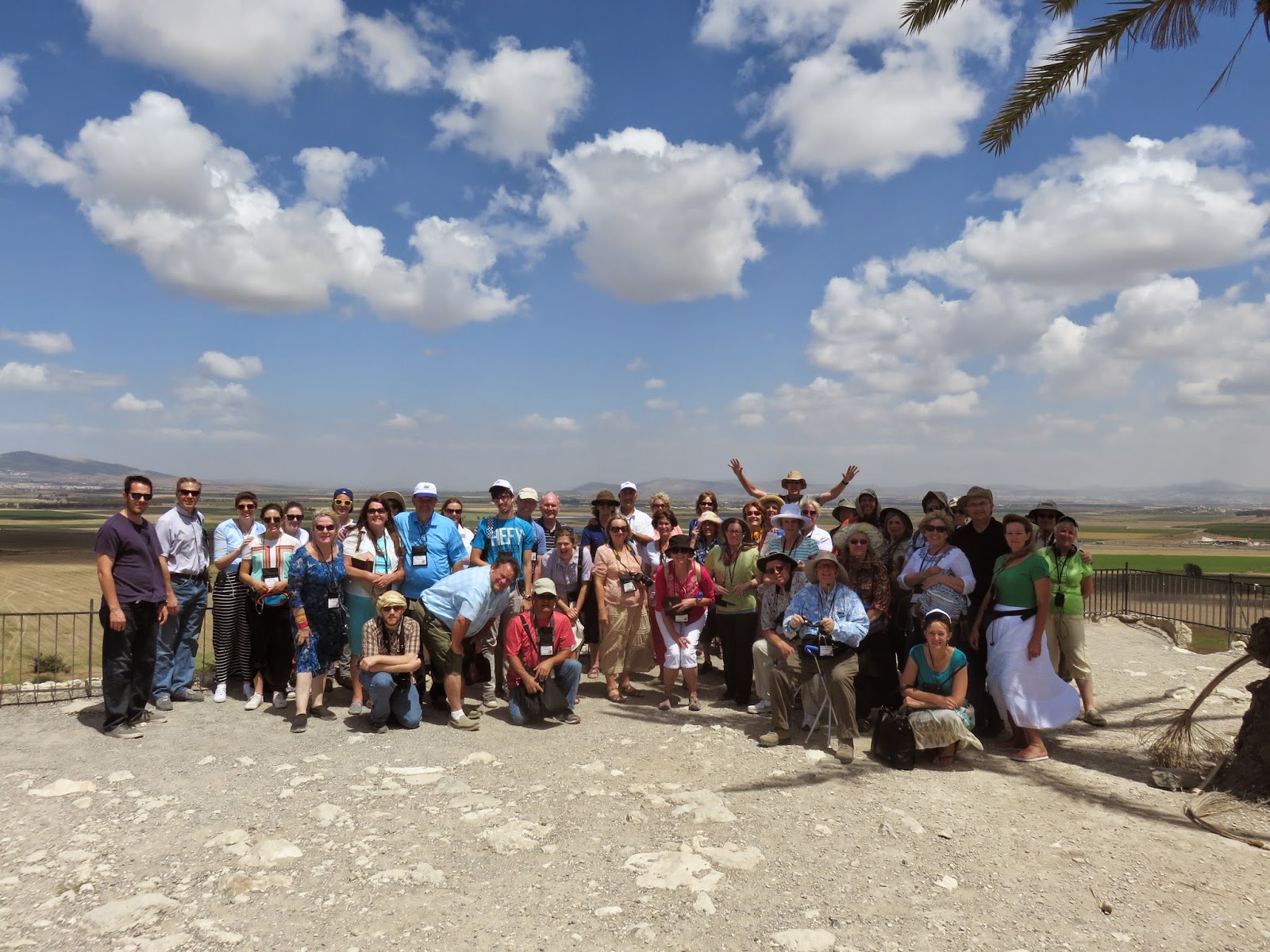 The name for the site in Hebrew is Har Megiddo, "Hill of Megiddo."  In Greek that is transliterated as Armageddon.  Alluded to in Zechariah 12 and Joel 3, is is most (in)famous from a reference in Revelation 16:16, that puts the last battle here.  In our devotional we focused not on the where’s and the who’s of the final battle but rather the daily battle that we fight against the powers of Satan in our lives every day.  We then sang “Jehovah, Lord of Heaven and Earth.”

We then drove into Galilee and stopped in Nazareth for the rest of the afternoon.  Because we had three buses, we tried to hit the sites in different orders so that we did not overlap too much.  As a result we did not go first to the Basilica of the Annunciation but rather to the so-called Synagogue Church, a Crusader-style church built on what was thought to be the site of the original synagogue that Jesus would have attended.  It is now own by the adjoining Greek Catholic church.  Our devotional there had little commentary or exposition from me; it was simply a reading from Luke 4:16-22 (Jesus’ reading from Isaiah about the anointed one) and some hymn singing.  That was the most moving part, I think.  We sang “Jesus of Nazareth” and “More Holiness Give Me,” after which I offered a prayer.

We then walked through the suq or market of Nazareth’s old city and went to the Basilica of the Annunciation, which commemorates Gabriel’s visit to Mary.  After Guide George gave us the history of the site, I read from Luke 1:26-38 and talked about the role and importance of Mary, including some paraphrasing of 1 Nephi 11. 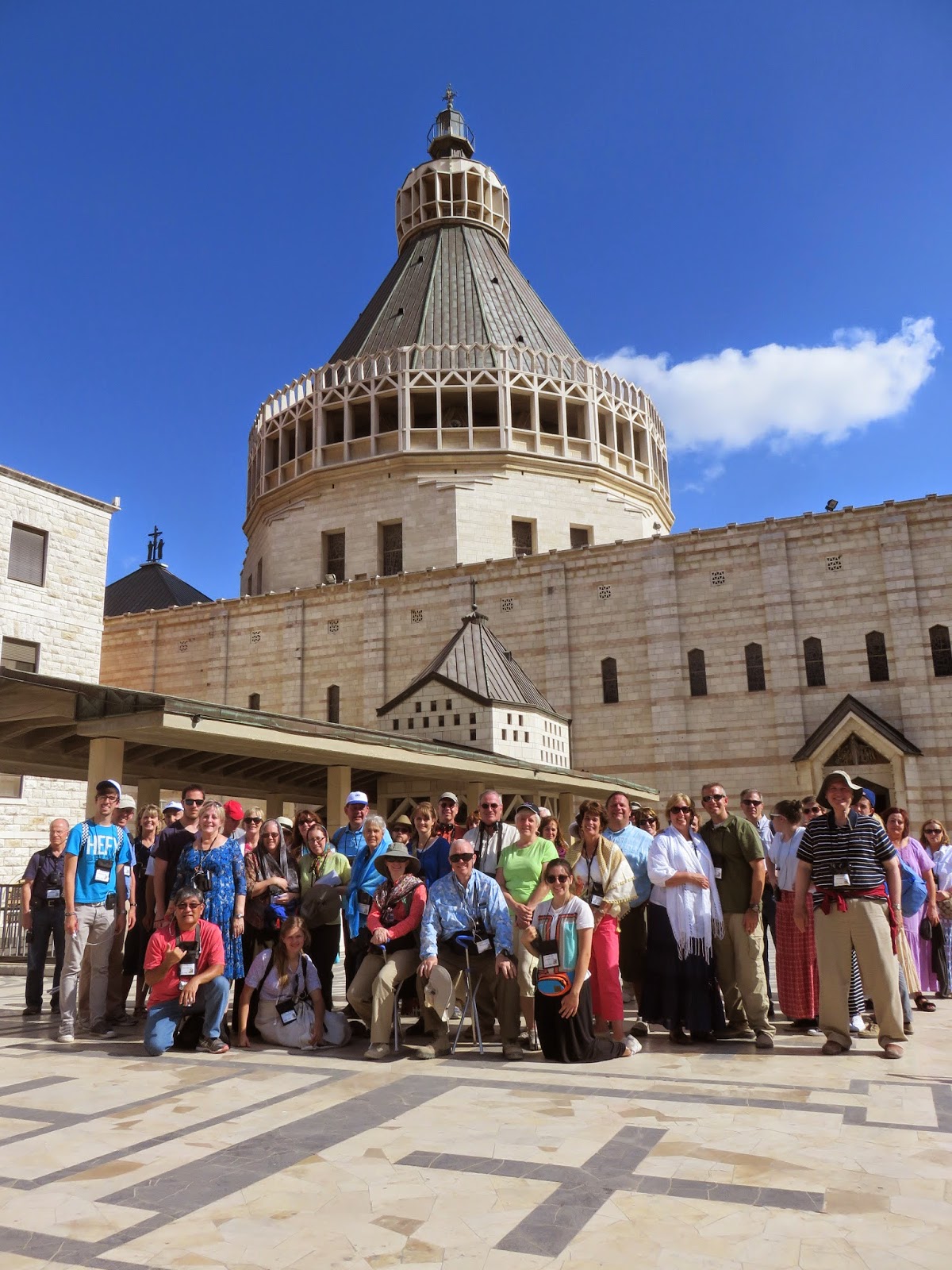 We then walked through the suq or market of Nazareth’s old city and went to the Basilica of the Annunciation, which commemorates Gabriel’s visit to Mary.  After Guide George gave us the history of the site, I read from Luke 1:26-38 and talked about the role and importance of Mary, including some paraphrasing of 1 Nephi 11.

We then went into the lower level of the basilica to see the “grotto” or early cave reverenced as the house of Mary where Gabriel appeared, went upstairs to see the main worship area, and then went out to the rear plaza to take our group picture.  We then walked to the Church of St. Joseph, and under a small statue group of the Holy Family (Mary, Jesus, and Joseph)

Finished in Nazareth, we drove out of the city to a high hill south of town known as “Mount Precipice.”   It is actually too far from the site of the first century village to have been the one from which the Nazareth villagers tried to throw Jesus, so after reading the account in Luke 4:22-30, I used the great view of the Jezreel Valley to the south to talk about the Transfiguration because Mt. Tabor, the traditional site of the Transfiguration. 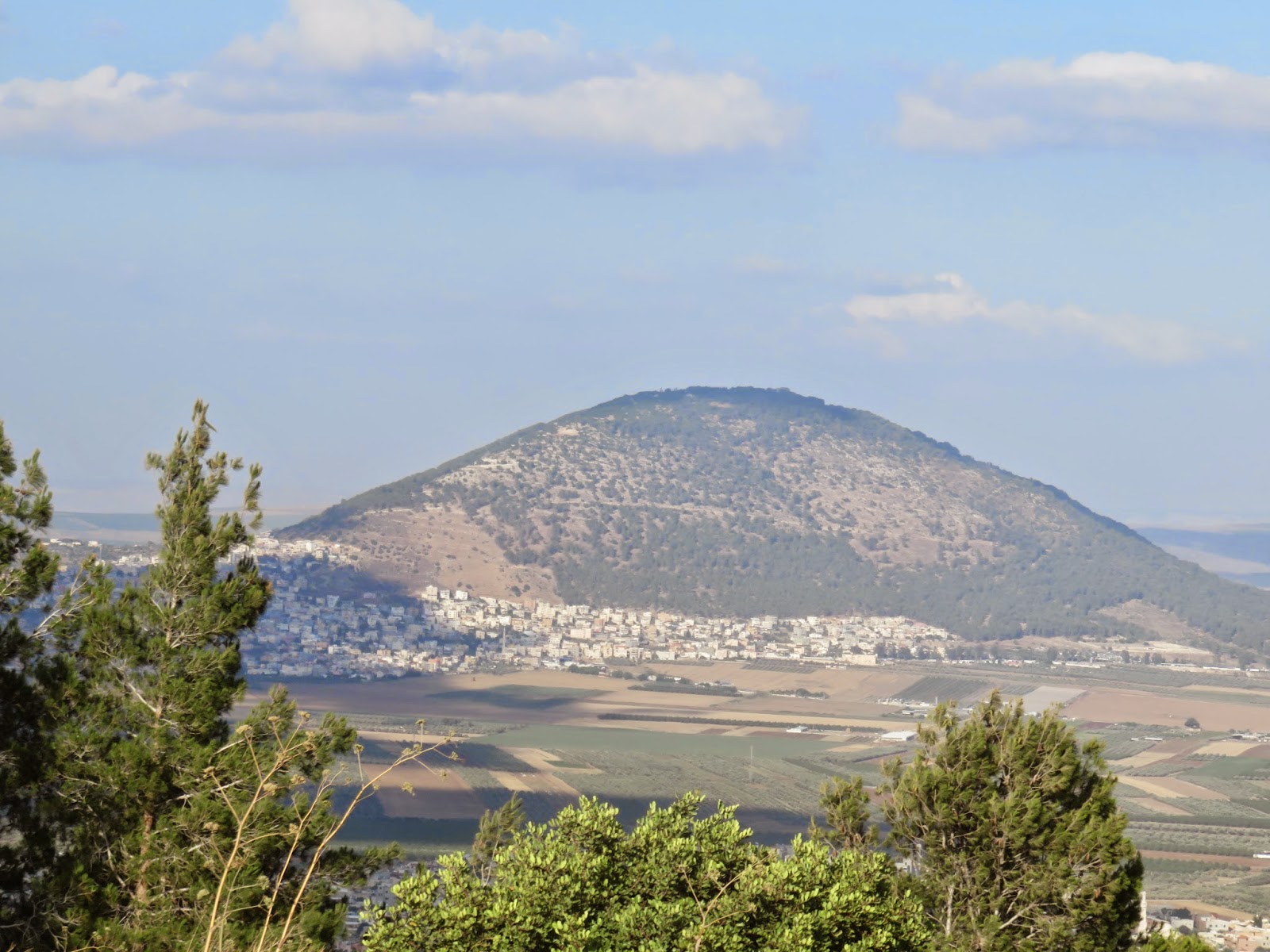