Updated 6/5/14.  Please check  in a few days for an updated posts and more uploaded pictures and perhaps some videos! 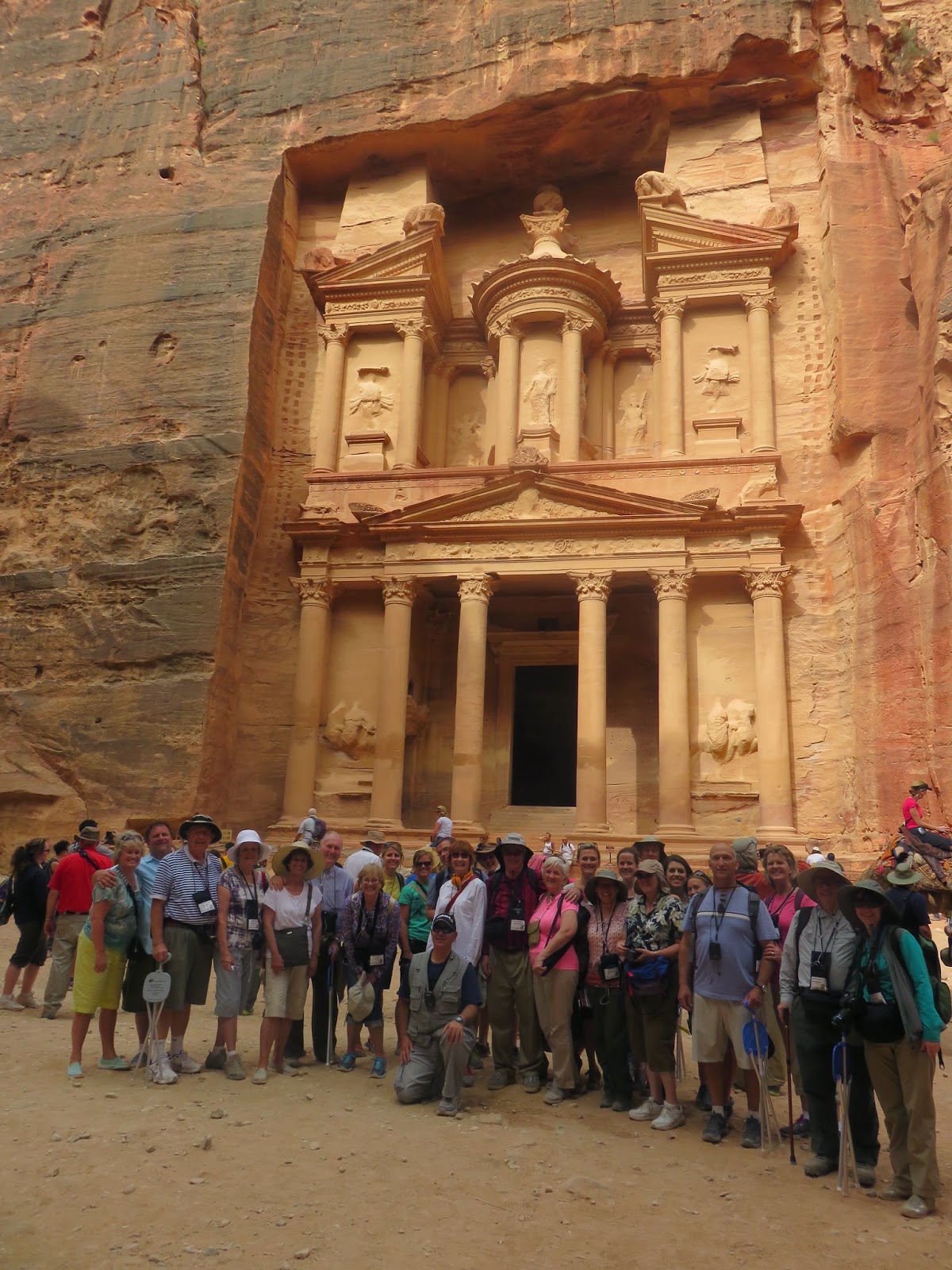 Today we started with what is, no doubt, the premier site in Jordan, the fabulous ruins of the Nabatean city of Petra.  The Nabateans were an early Arab people who moved into much of the territory of the Old Testament kingdom of Edom (the Edomites, in the Persian period, moved into the southern part of OT Judah and became the Idumeans of the New Testament).  They expanded their territory east, south, and into the Sinai and became incredibly wealthy in the first centuries before and after Christ because of their acumen as merchants and in particular because of their control of the spice trade.

They built their capital in a sunken valley surrounded by high mountains that had only one way in and out, the narrow cleft valley known as the Siq.  Approaching the siq and in the valley itself are hundreds of tombs cut right into the rock face, many of them incredibly ornamented.  Perhaps the most famous, the so-called Treasury, is known from the Indiana Jones movie The Last Crusade.

Because of time pressures (tomorrow is another wake-up call at 5:00, leave at 6:30 morning) and of course the difficulty of uploading photos from this hotel, I am going to give you the link to one of my earlier visits with BYU students.  These posts have detailed maps and many pictures that will give you and idea of the places we saw.  A few pictures are sprinkled here of our group today. 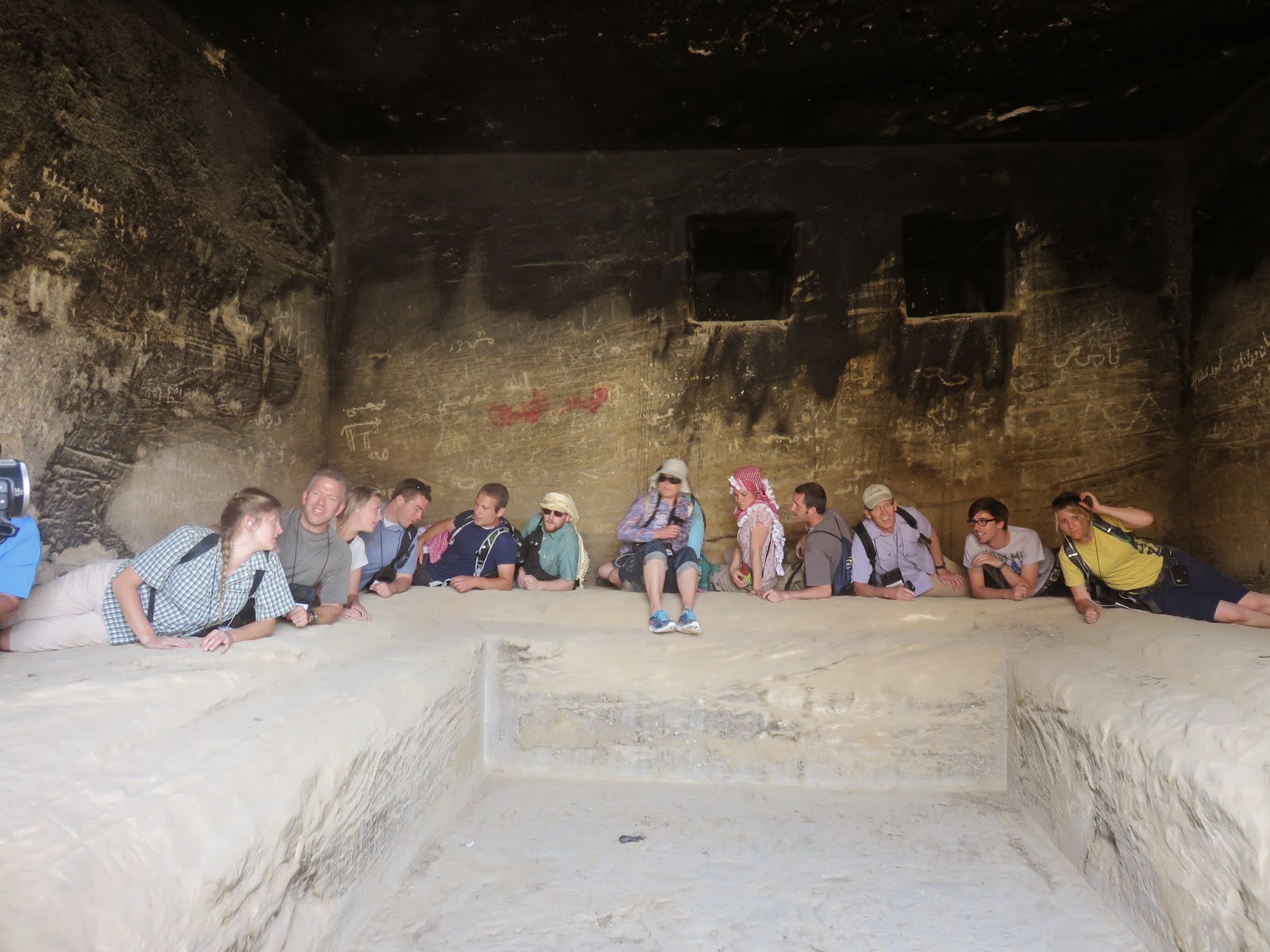 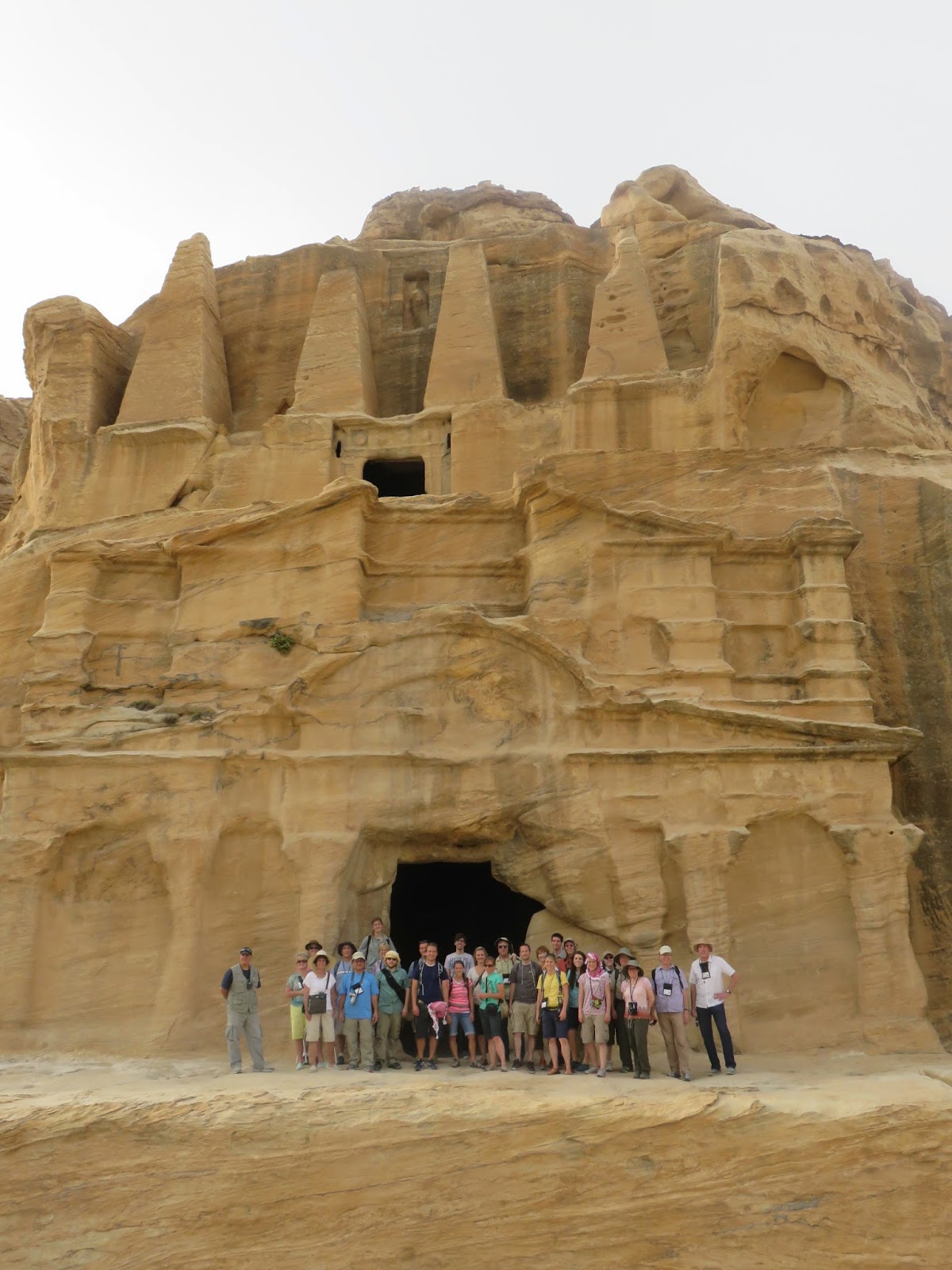 The picture above is one new thing that I wanted to post right away, despite the upload time.  Here we are demonstrating how to use a triclinium (literally “three couches”) which was the standard way of eating in the Mediterranean world, at least in a banquet of festive setting.  This particular one is actually in the room under the tombs in the Mausoleum of the Obelisks on the way into Petra.  Family of the deceased came on anniversaries to share a funerary meal, kind of a way of being with the dead.  Anyway, it was my chance to give my group an idea of the way that Last Supper would actually have been celebrated (not sitting around a table like Leonardo Da Vinchi portrayed it!).

People actually reclined at dinner in pairs, with Rachel up against my chest to as the Beloved Disciple would have “reclined in the Lord’s bosom” at the Last Supper.  When I have better internet, I will post a video we took of me describing the scene.

One other thing that was different about this visit to Petra was that after Rachel and I made the long climb up to the Monastery (an even bigger and more impressive version of a Nabatean tomb like the Treasury) was meeting up with my student Juan Pinto and my colleague Cynthia Finlayson.  Cyndy is of BYU's anthropology department, and she helps direct an archaeological excavation up by Al Deir (the official, Arabic name of the Monastery) every seasron, and this year Juan is helping at the dig. 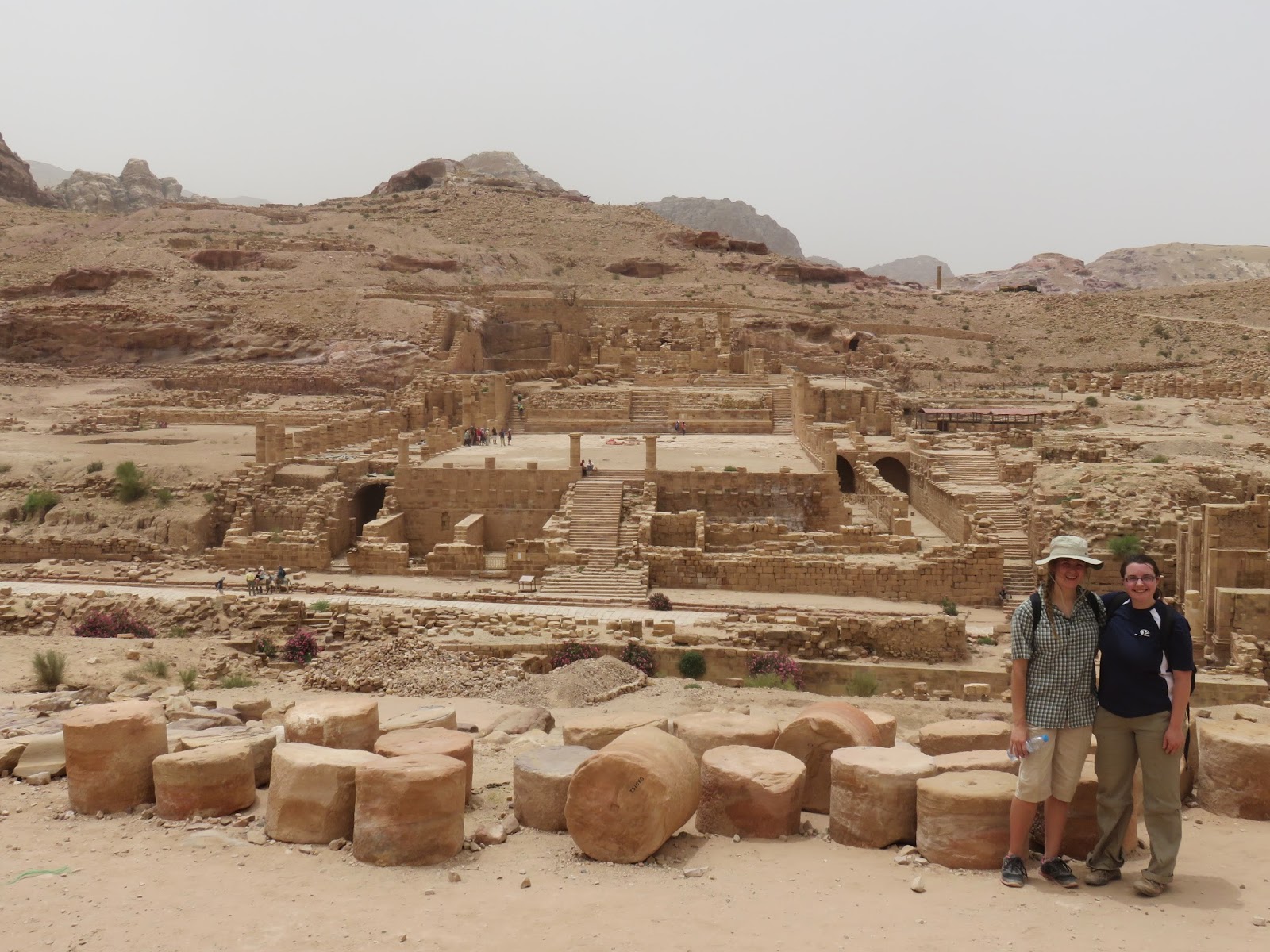 After we left Petra, we went to lunch, in what has become a rather typical Arab buffet.  We then went to Wadi Rum for a “desert safari.”  This is a desert valley where much of “Lawrence of Arabia” was filmed.  We headed out in a convoy of 4x4’s for some desert driving.  Different, but fun.  Once again, more pictures will follow . . . but I am getting WAY tired waiting for uploads to finish in the middle of the night, and we are getting up again in just four hours.  The things we do for our public . . . 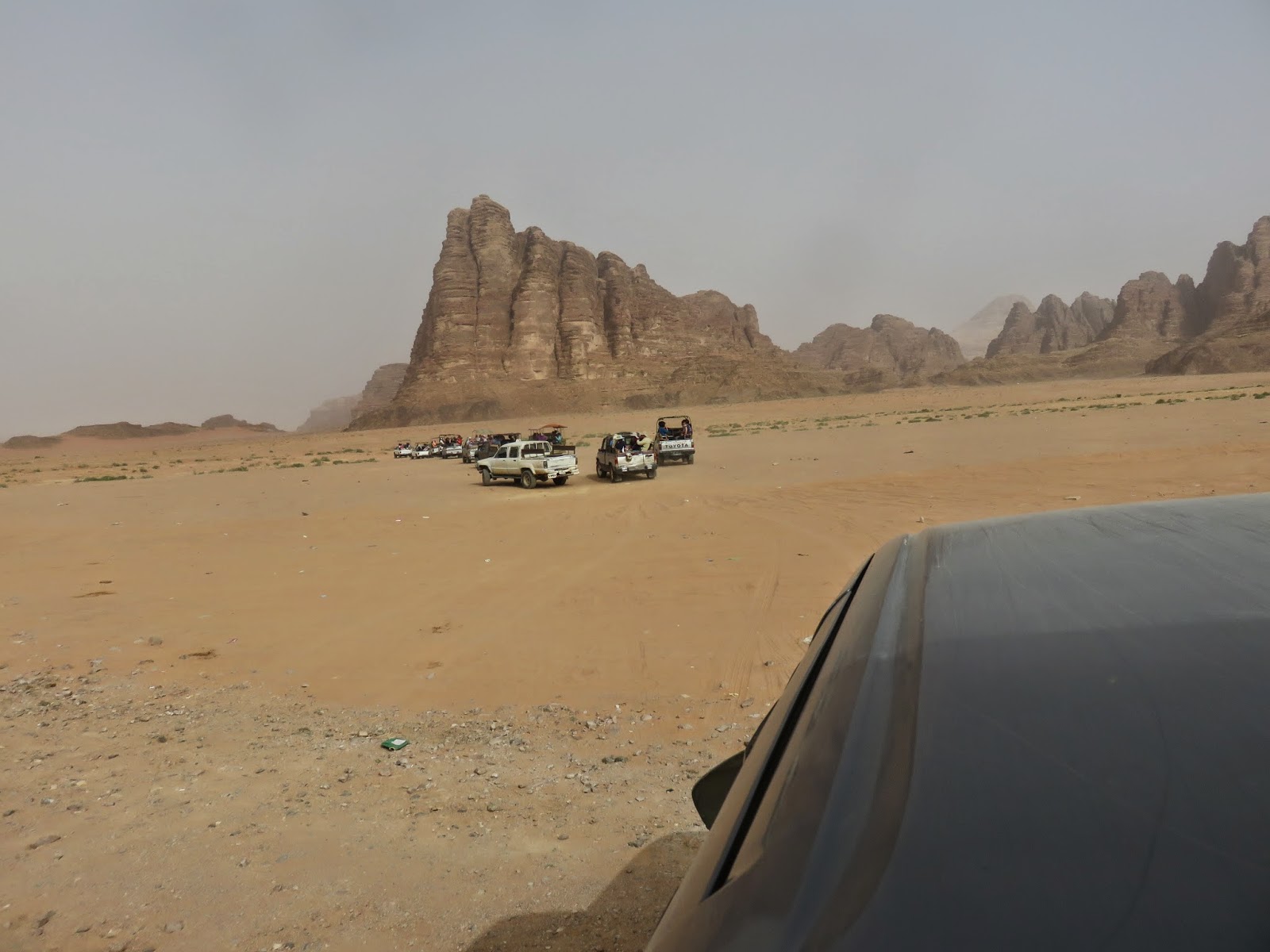 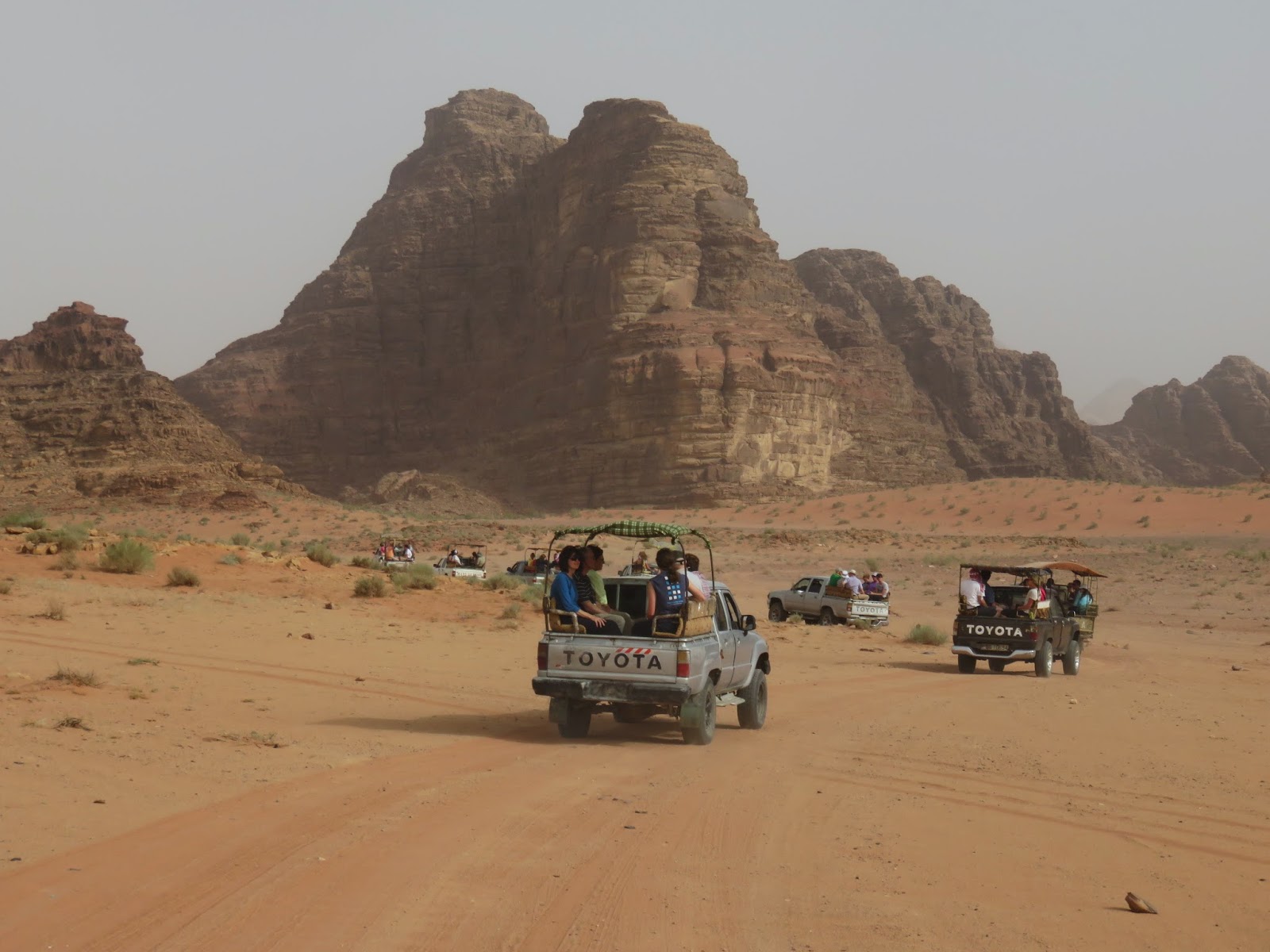 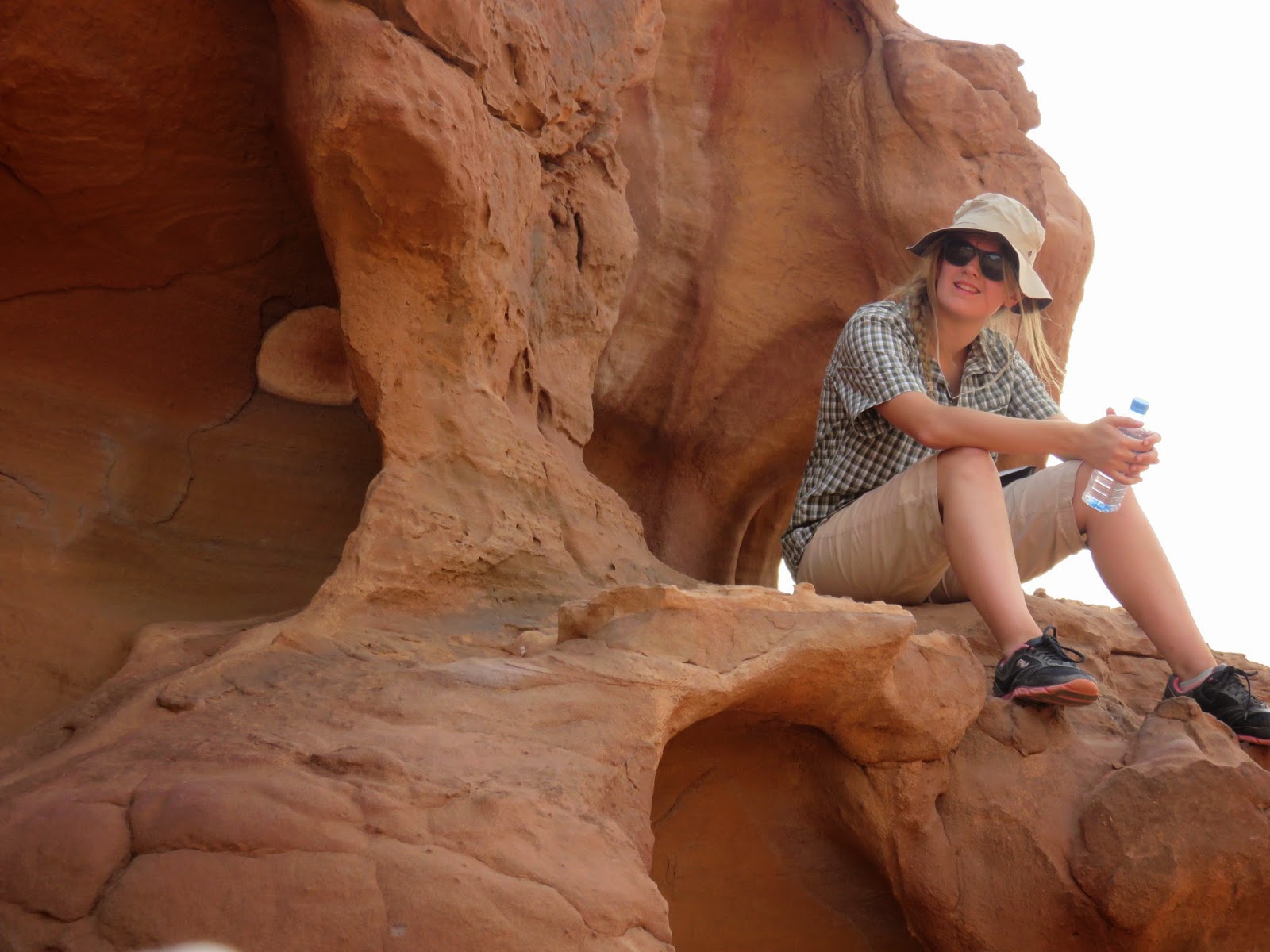 We then stopped at the end of the safari for a Bedouin feast and dancing.  The lamb was cooked in the ground, and the dancing (traditional Arab, even a Greek song, and some modern) was unexpected but fun.  It really did turn into a Daddy Daughter date for me and Rachel. 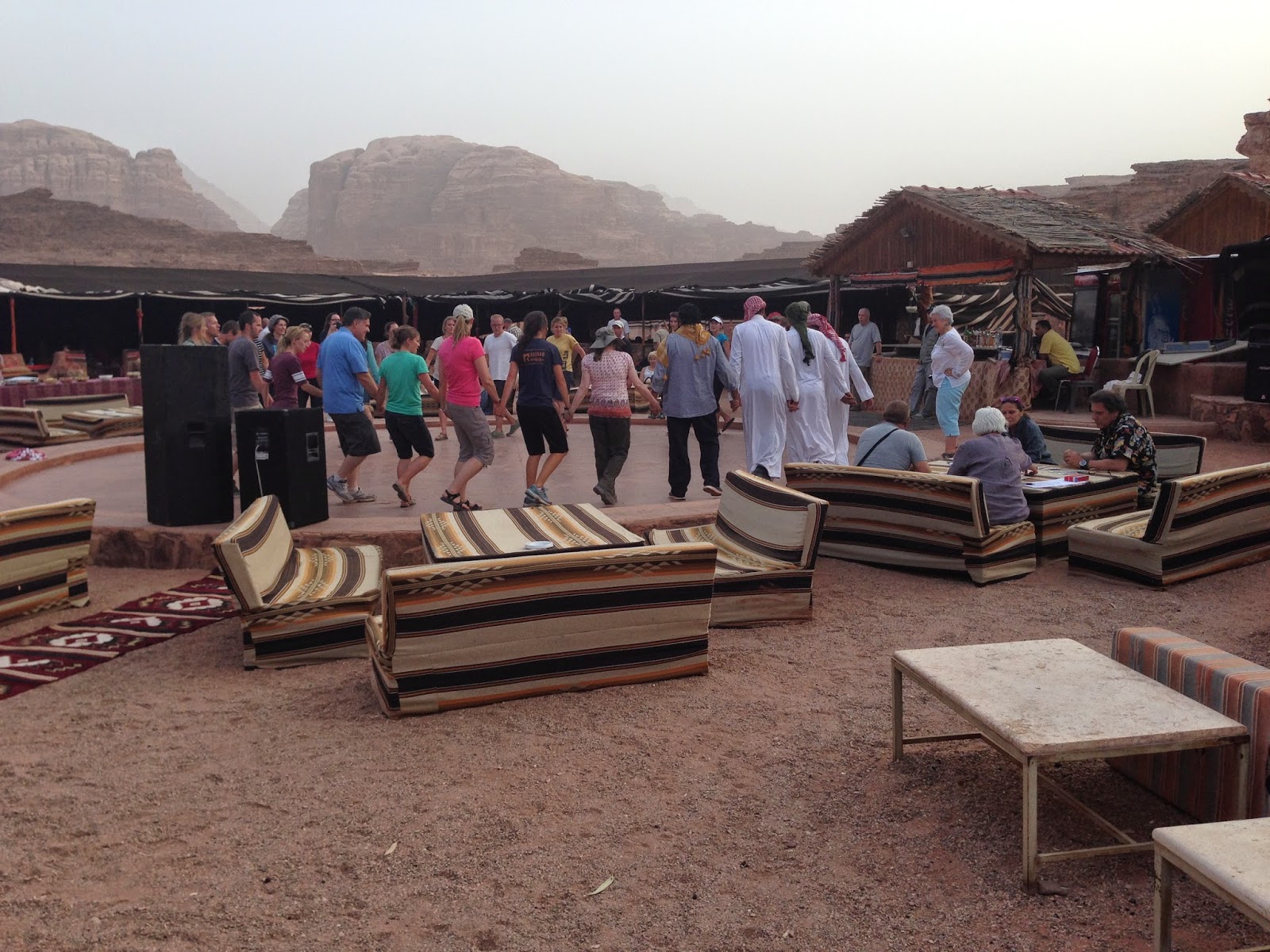 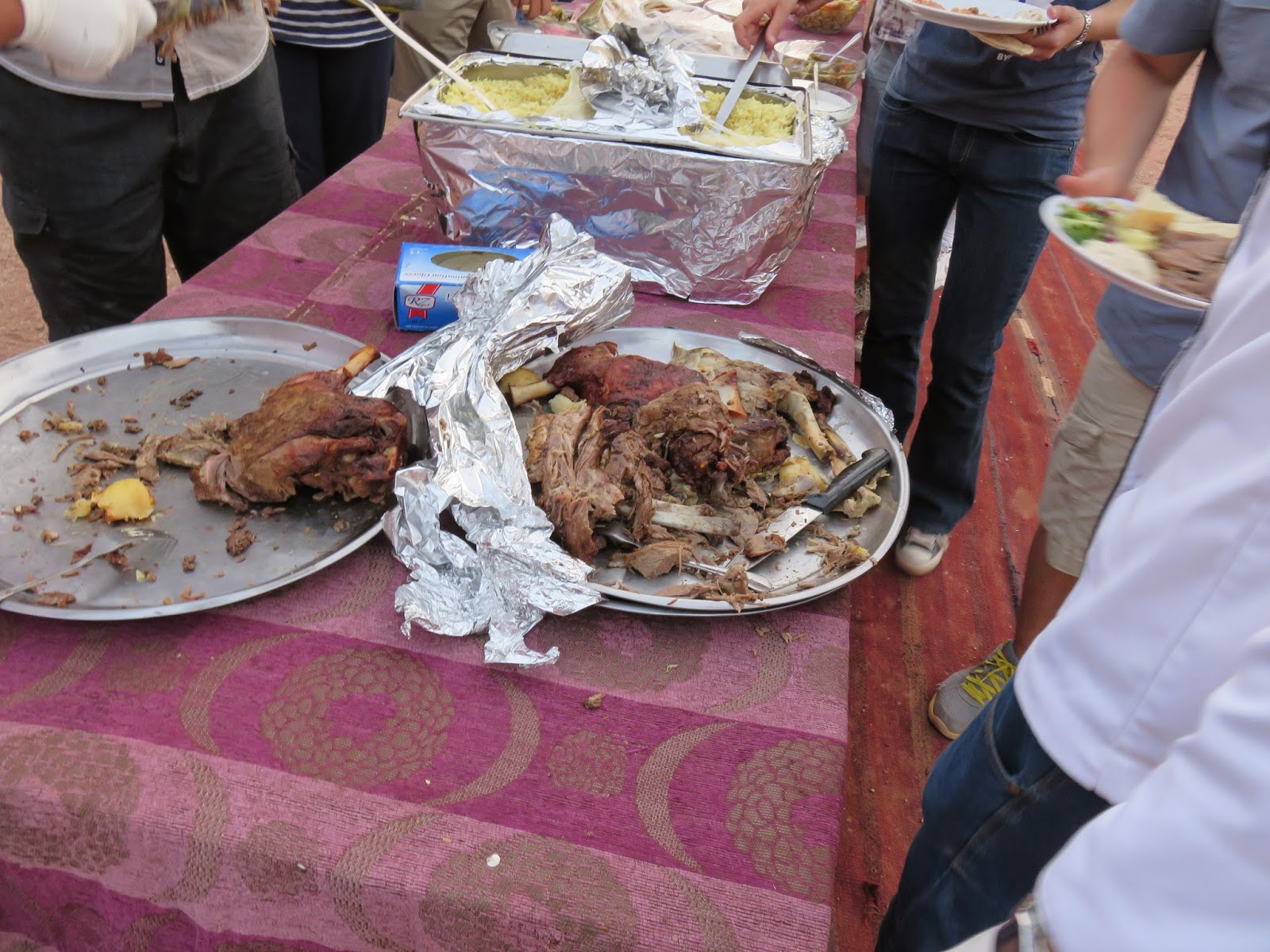 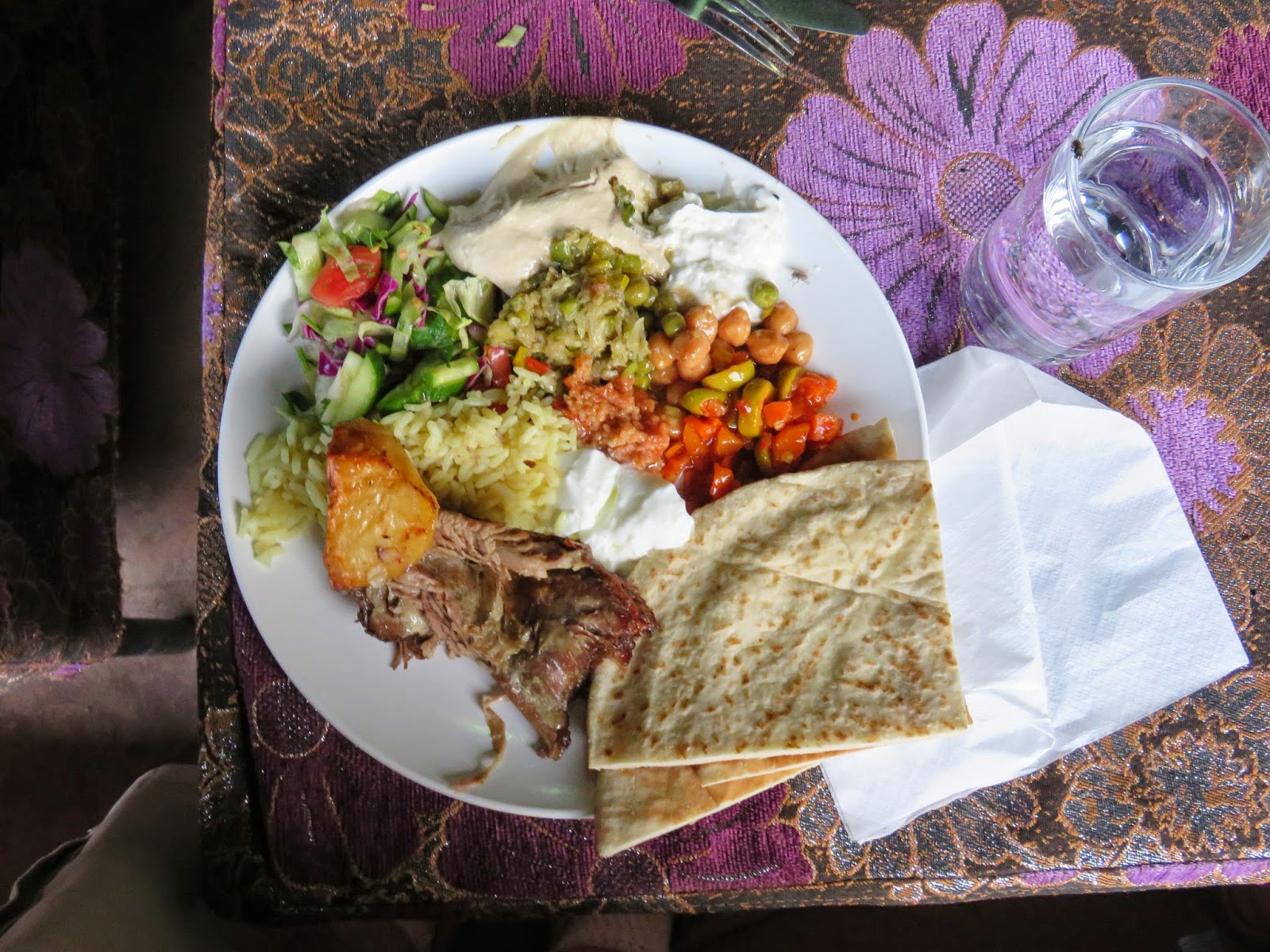 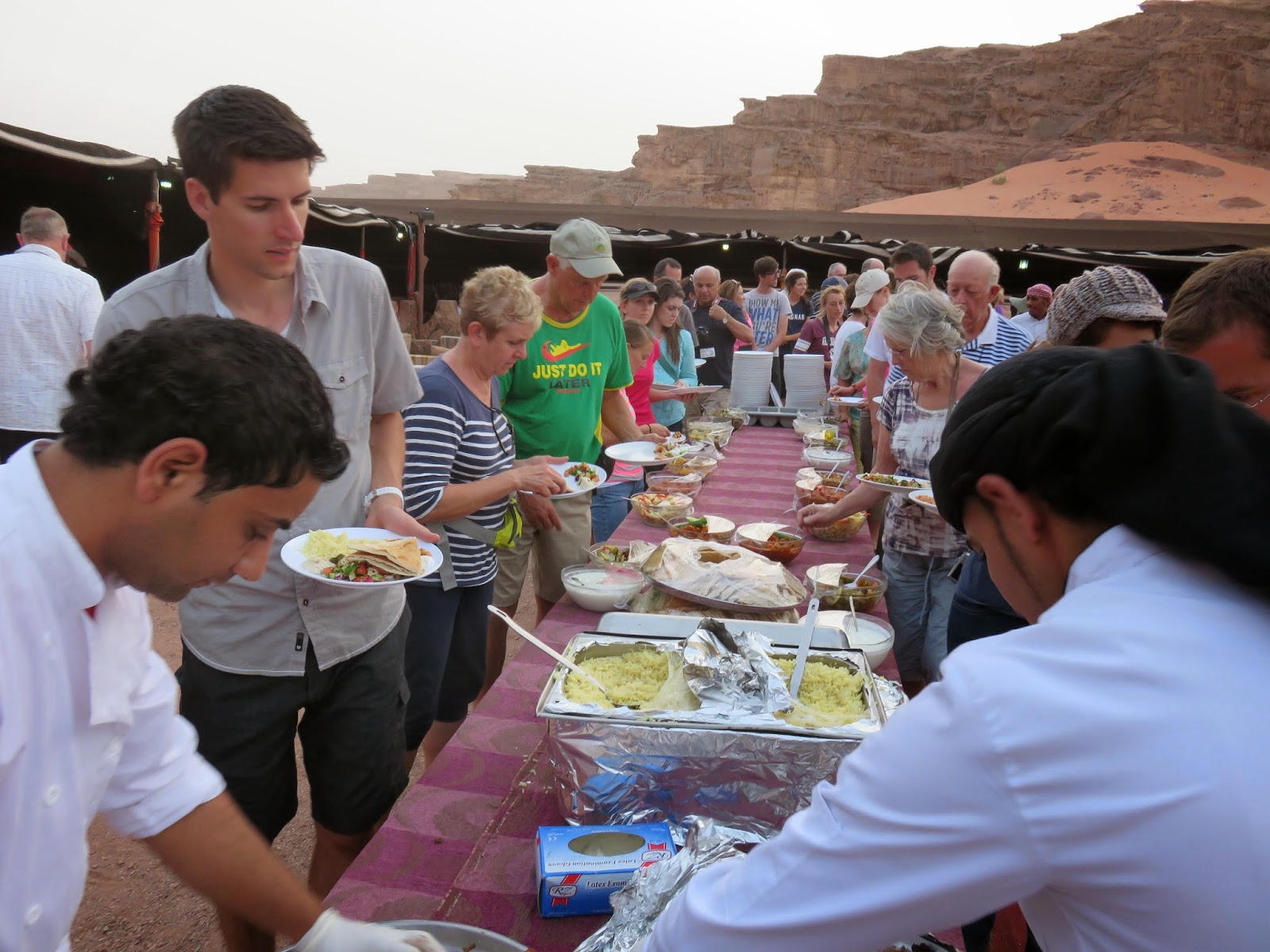