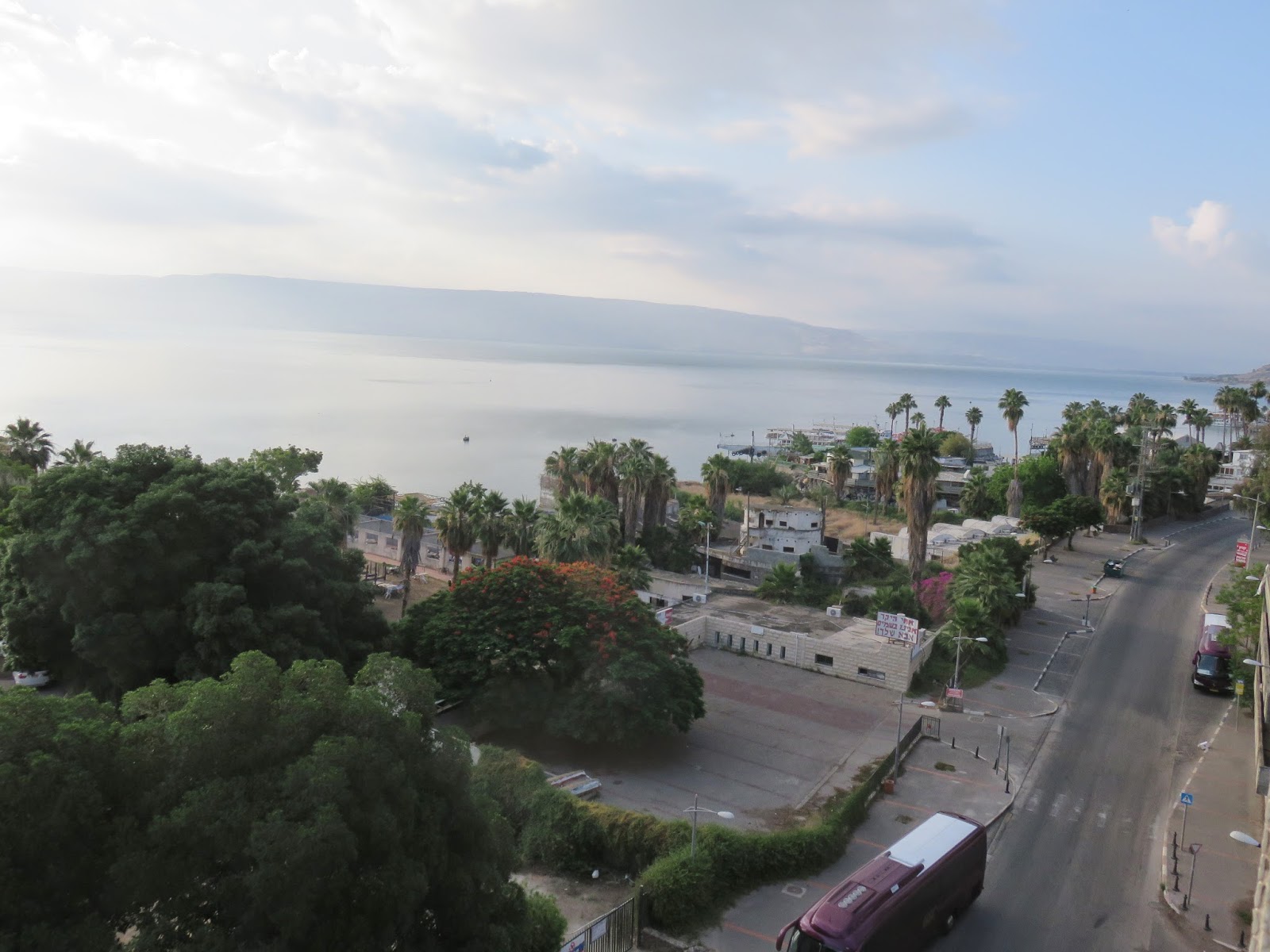 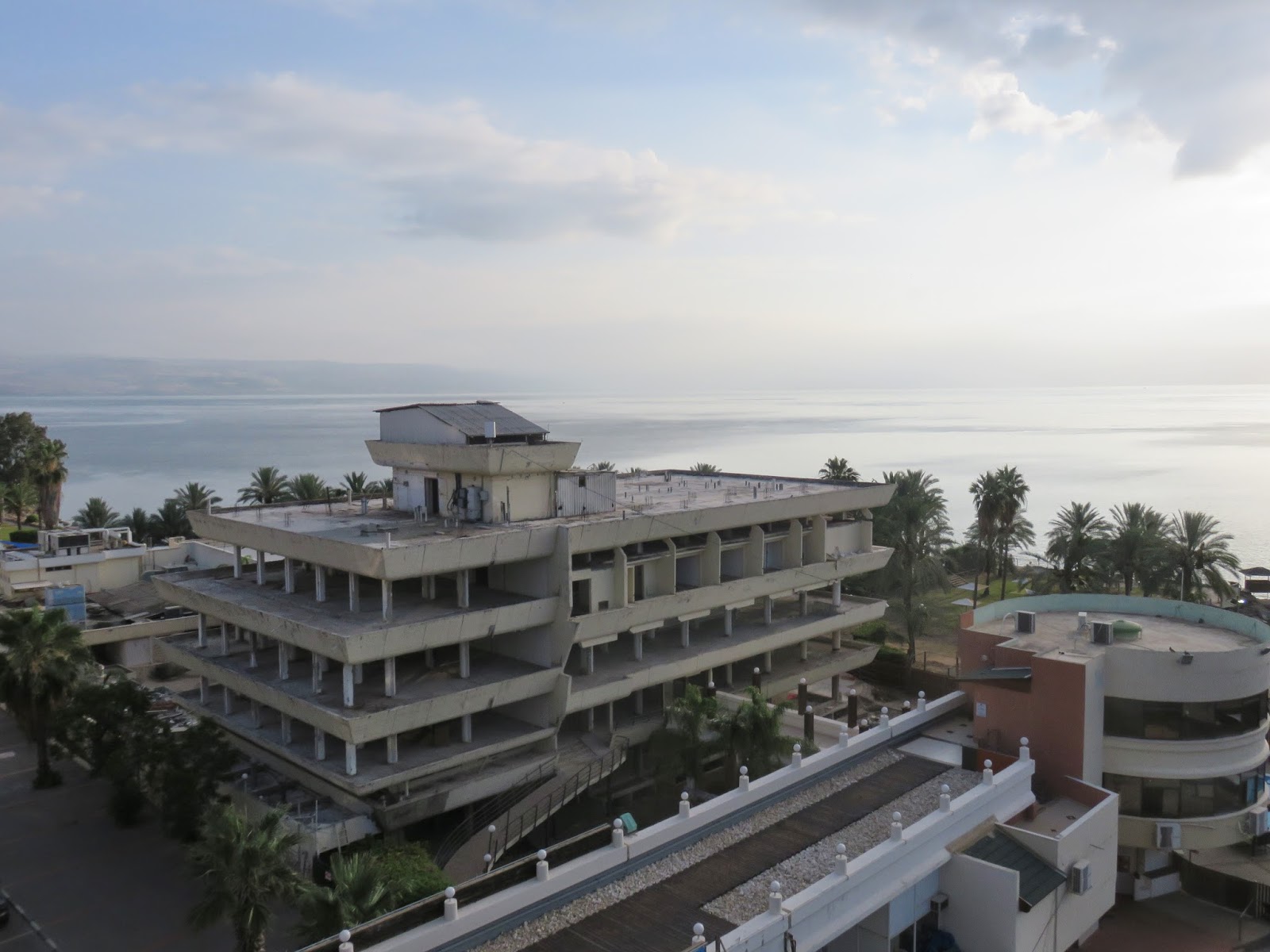 The morning sun streaming into my room greeted our first full day in Galilee.  We started with a couple of sites near and on the Sea of Galilee and then continued north and then east into the Golan as well.

We started just north of Tverya (Tiberias) in the Valley of the Doves below Mt. Arbel.  This valley comes down to the Sea of Galilee at Magdala from the Galilean hills to the west and includes what would have been the route from the Mediterranean to the lake. It is very likely the path that Jesus would have taken as he walked from his hometown of Nazareth to Capernaum. 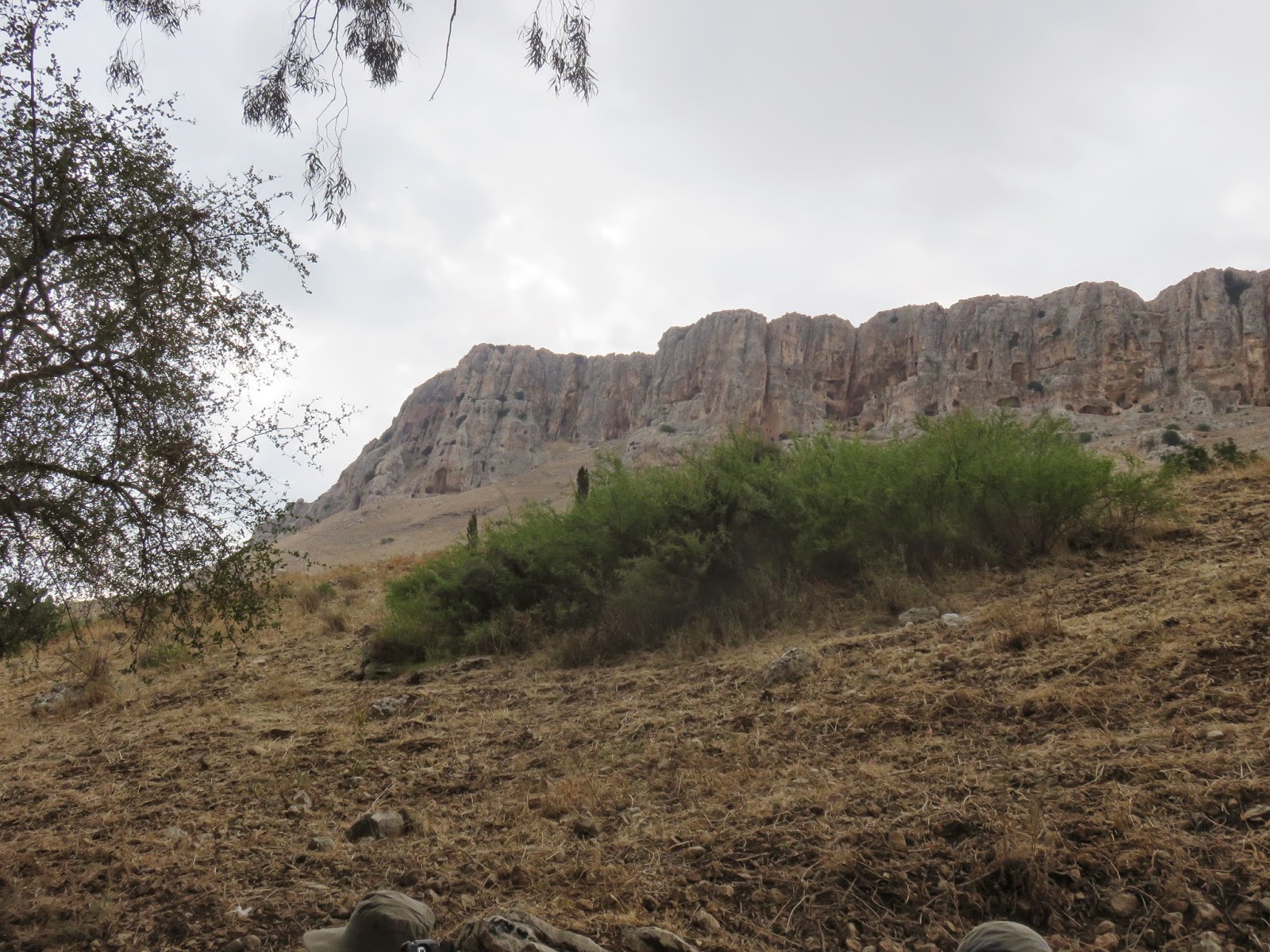 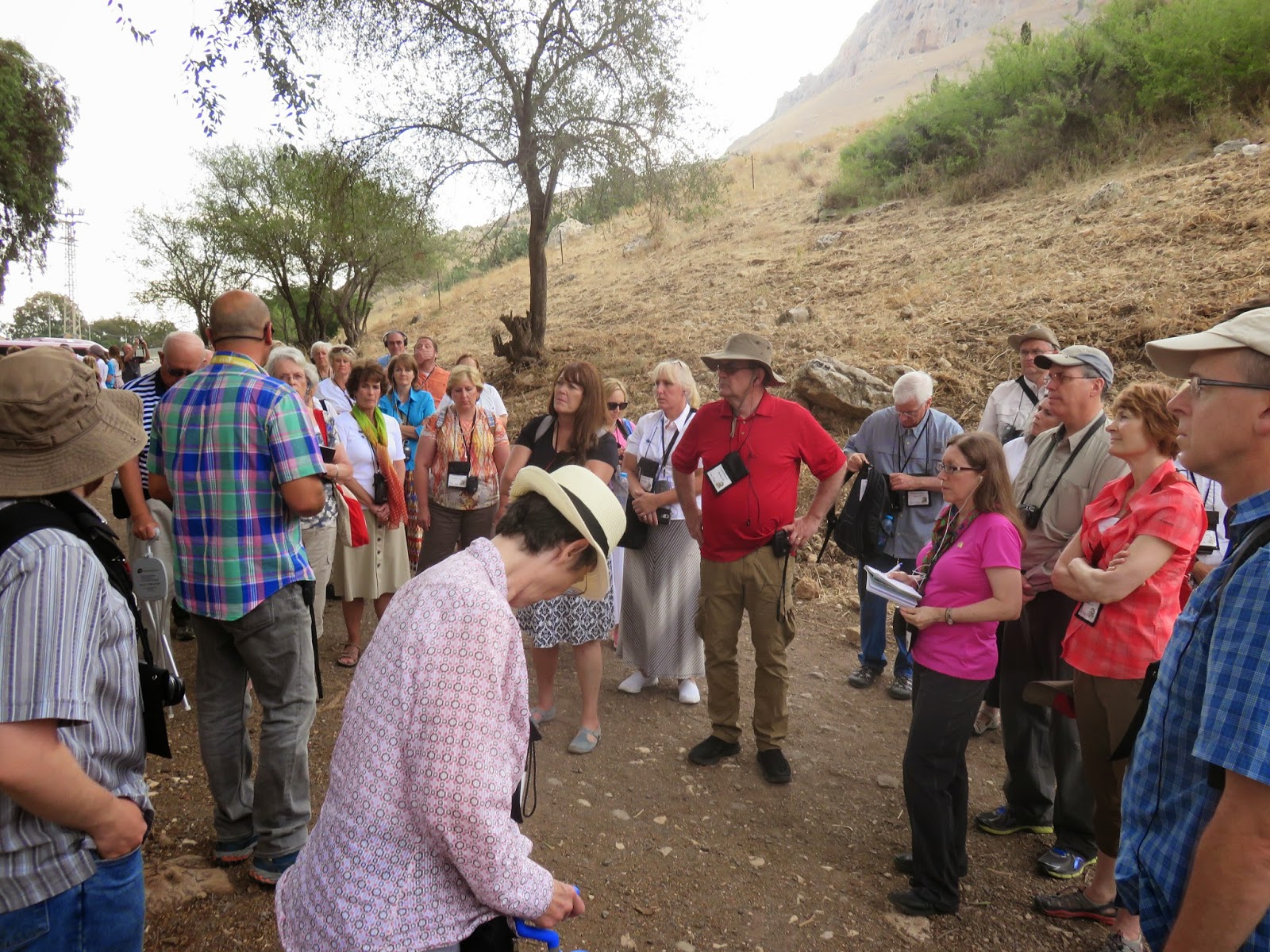 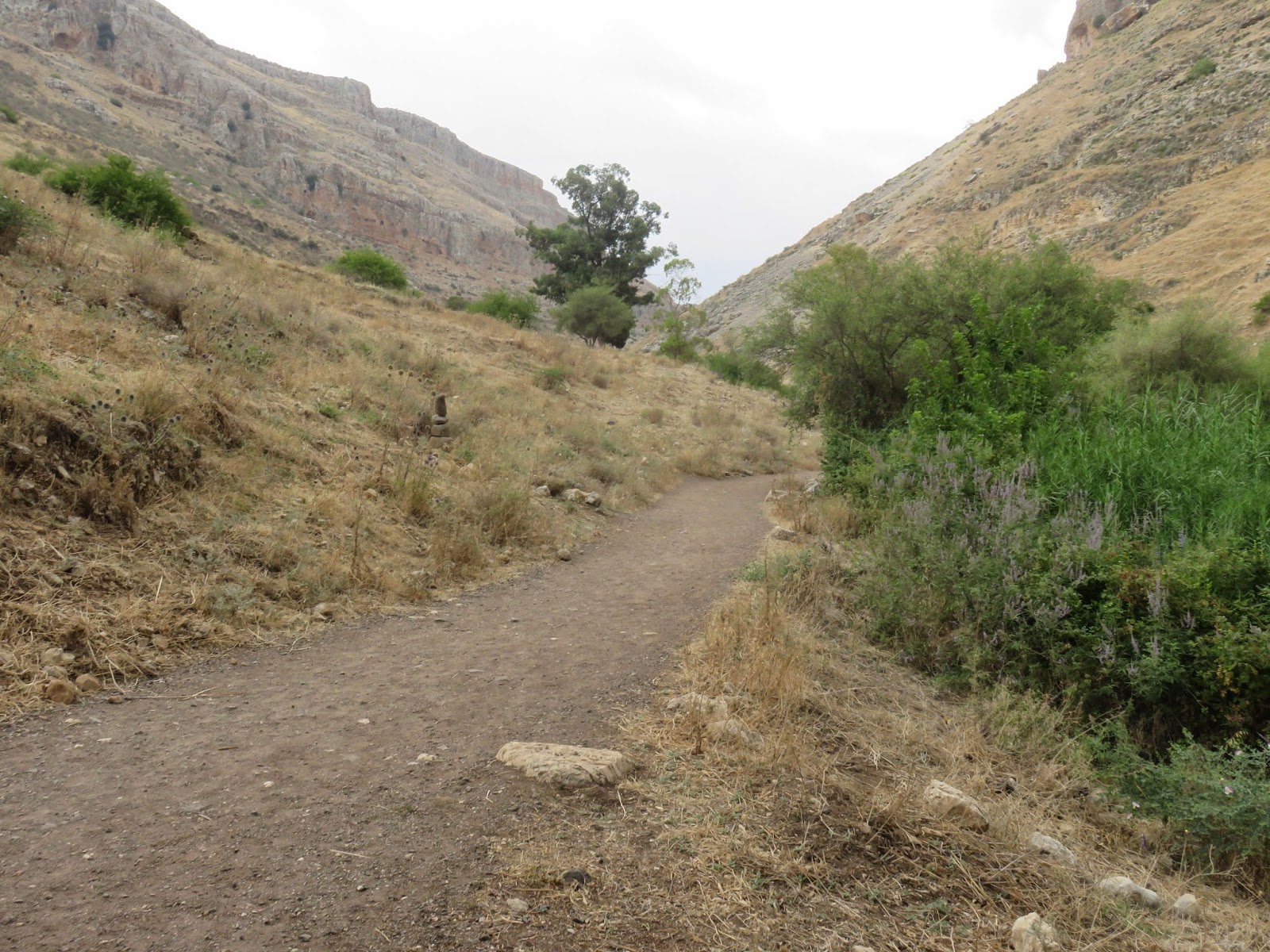 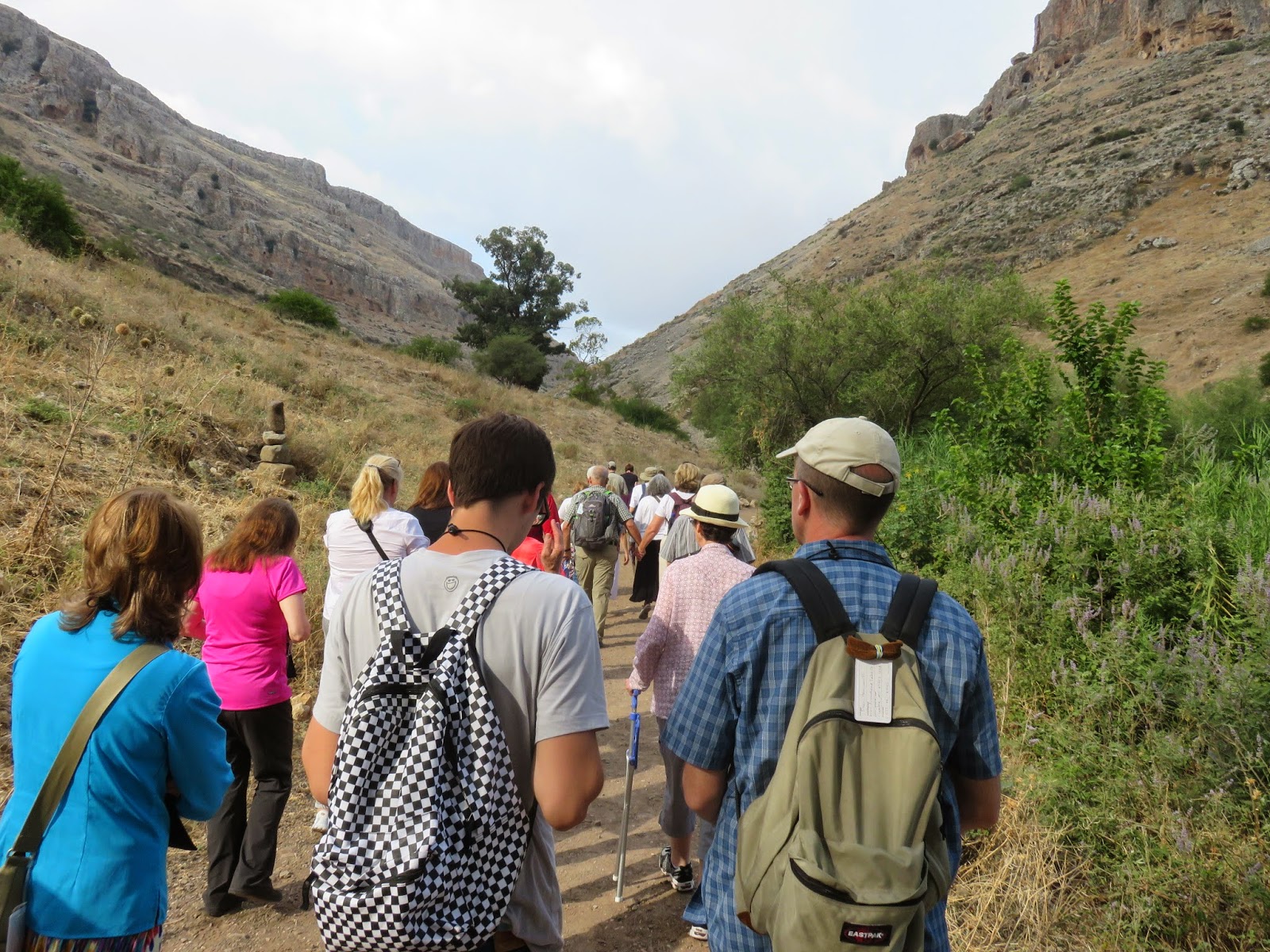 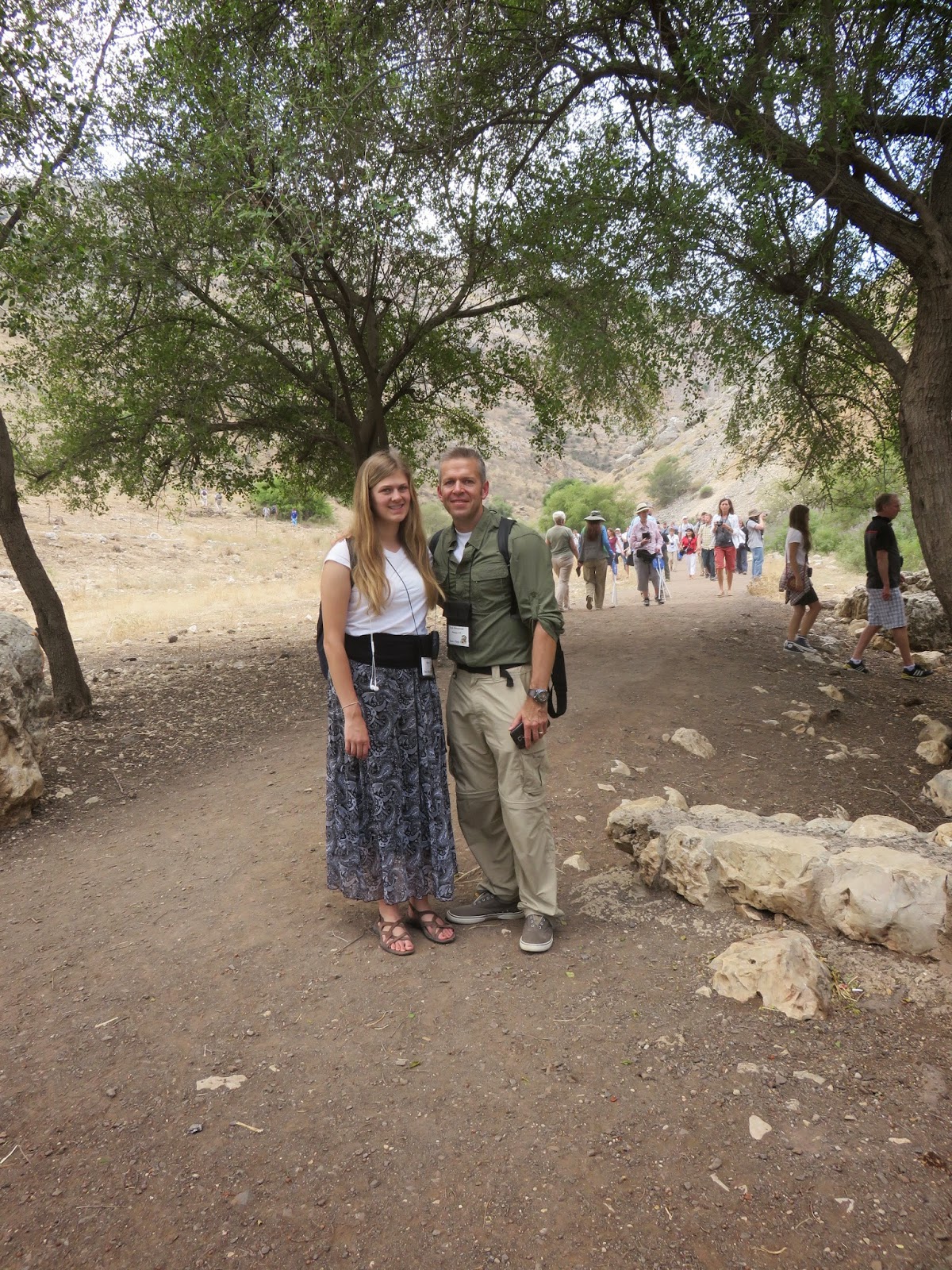 After singing "Come Follow Me," we walked in silence along the so-called Jesus Trail. It was a very moving experience, one that I had never done as part of the Jerusalem program. 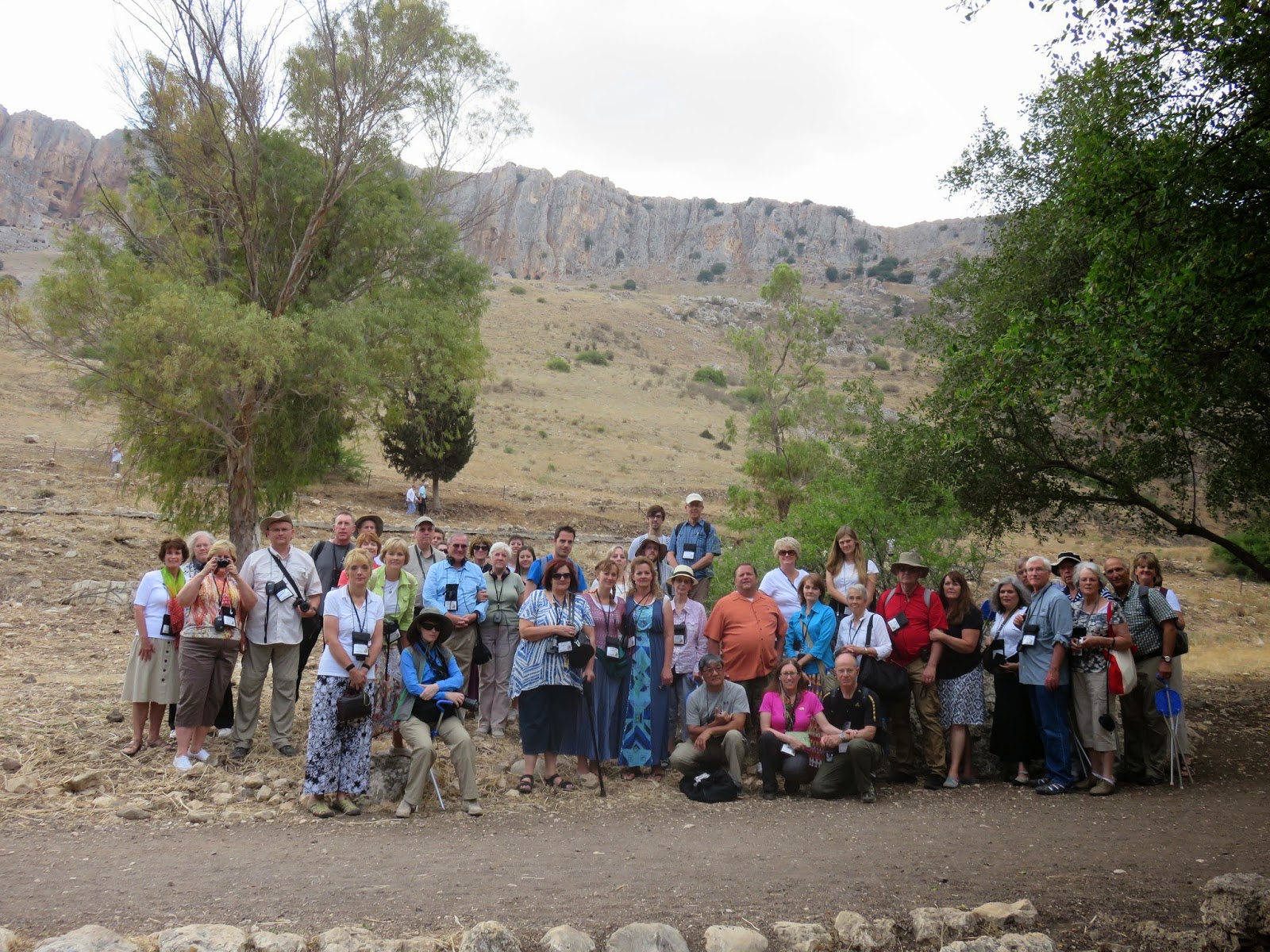 Our next stop was on the northwest coast of the Sea of Galilee.  At place called Tabgha in Arabic (a corruption of the Greek heptapegon for "seven springs"), early Christians identified the site of the miracle of the feeding of the 5,000 (Luke seems to place it near Bethsaida, but the other gospels speak of a "desert" or empty place, and this was the only site that fit the description well). 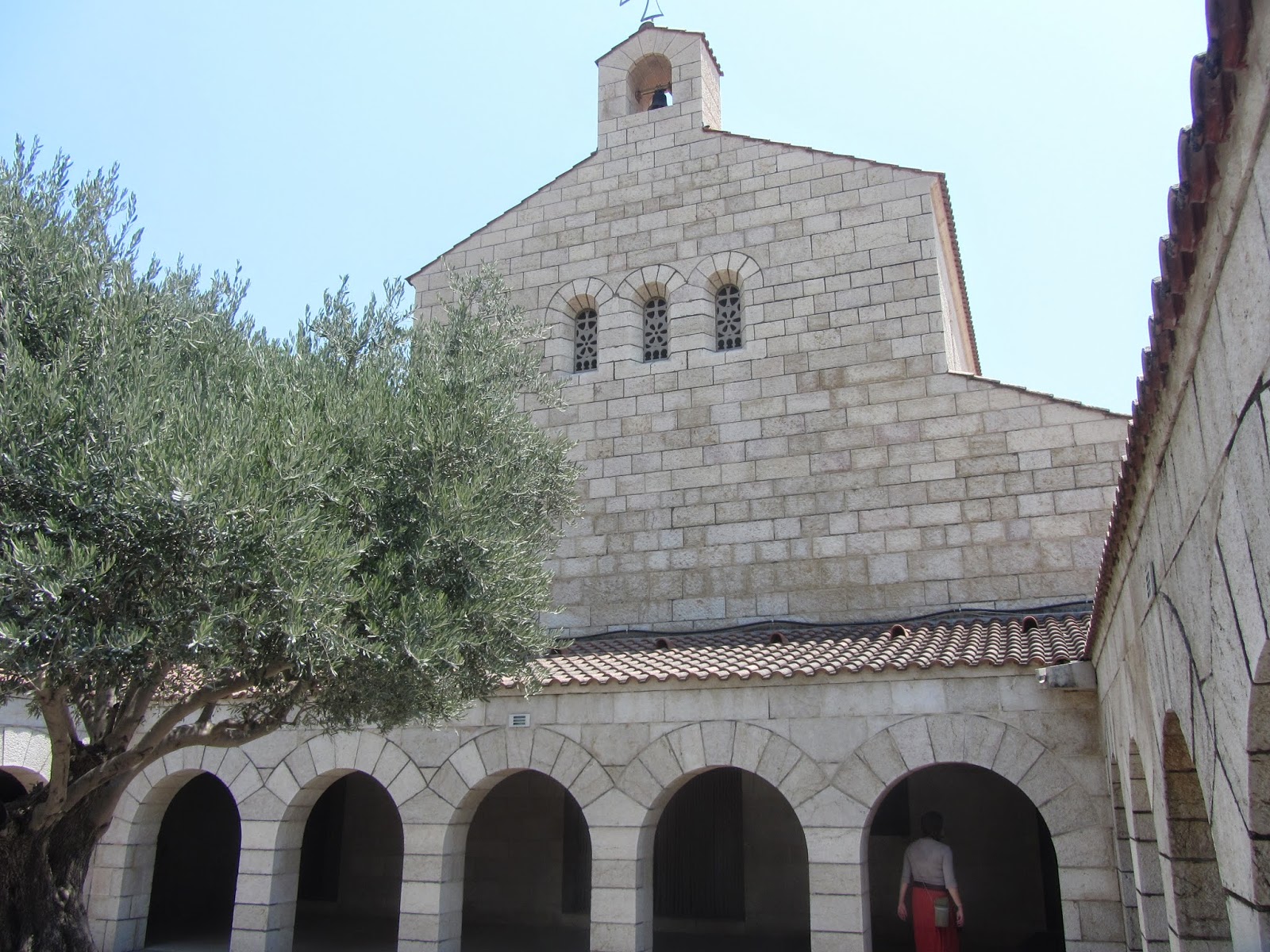 Before we went into the church that commemorates the multiplication of the loaves and the fishes, I taught from John 6 about Jesus being the Bread of Life. Then we sang "Come unto Jesus." We then went into the modern church, which was built to resemble the original early Christian basilica and features some mosaics from that period, including one of a basket of loaves and two fish before a large stone that was traditionally held to believe where Jesus worked the miracle. 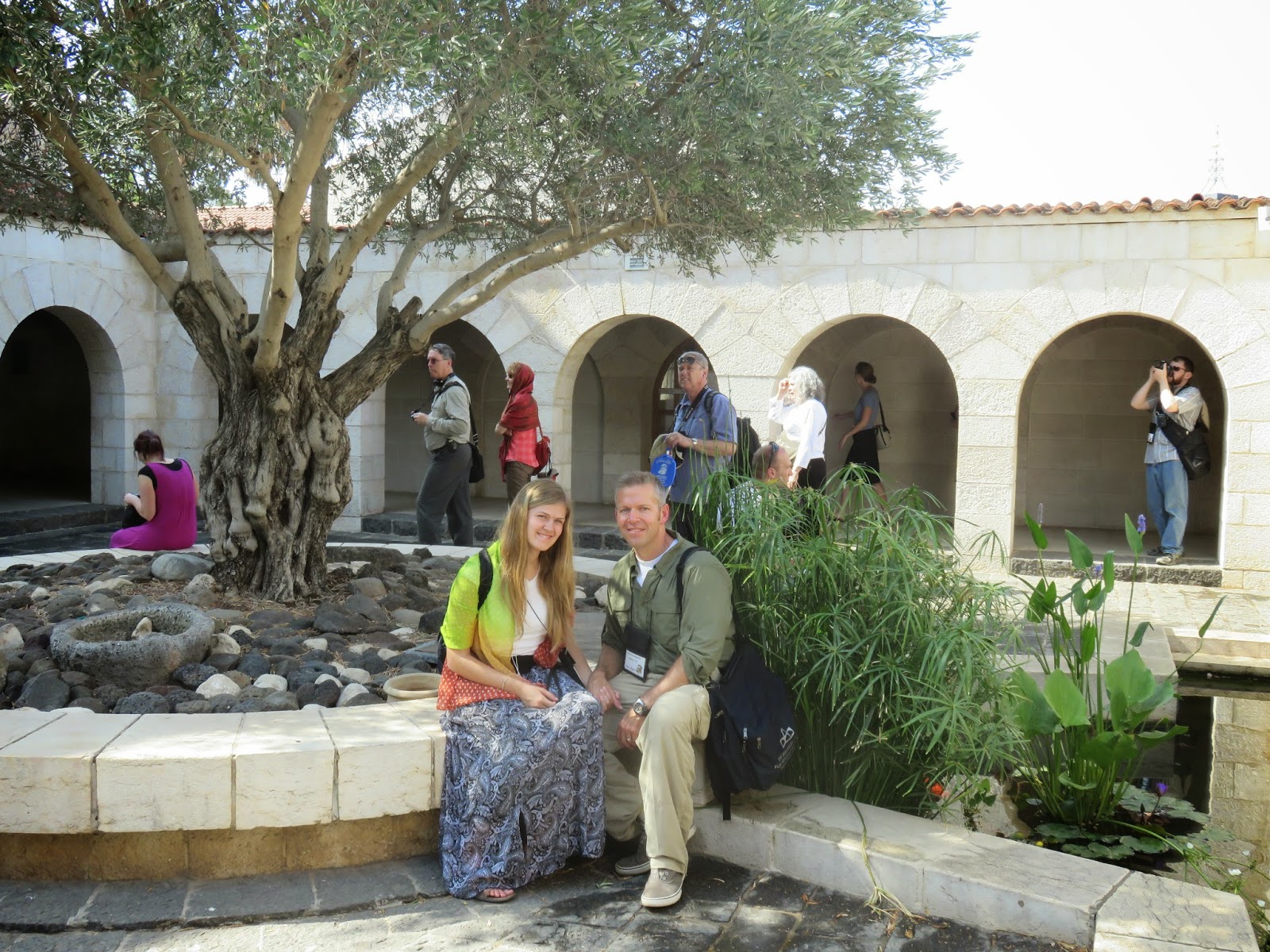 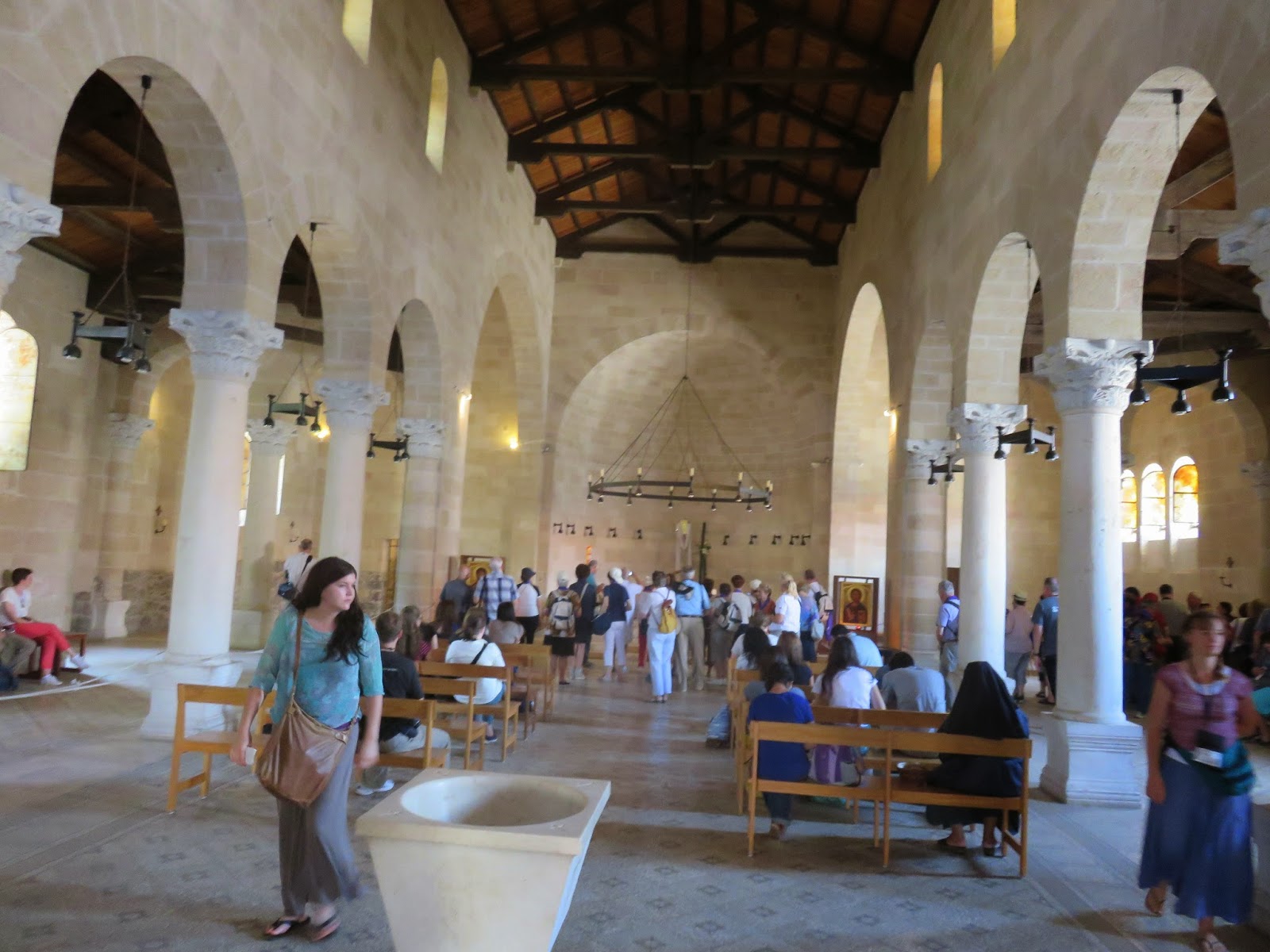 We then went up to the Mount of Beatitudes, which is a hill that slopes down towards the sea and where tradition holds Jesus delivered the Sermon on the Mount.  There is a lovely octagonal church there that commemorates the Beatitudes, but the great beauty of the site are the gardens contain small areas for teaching and pilgrimage. 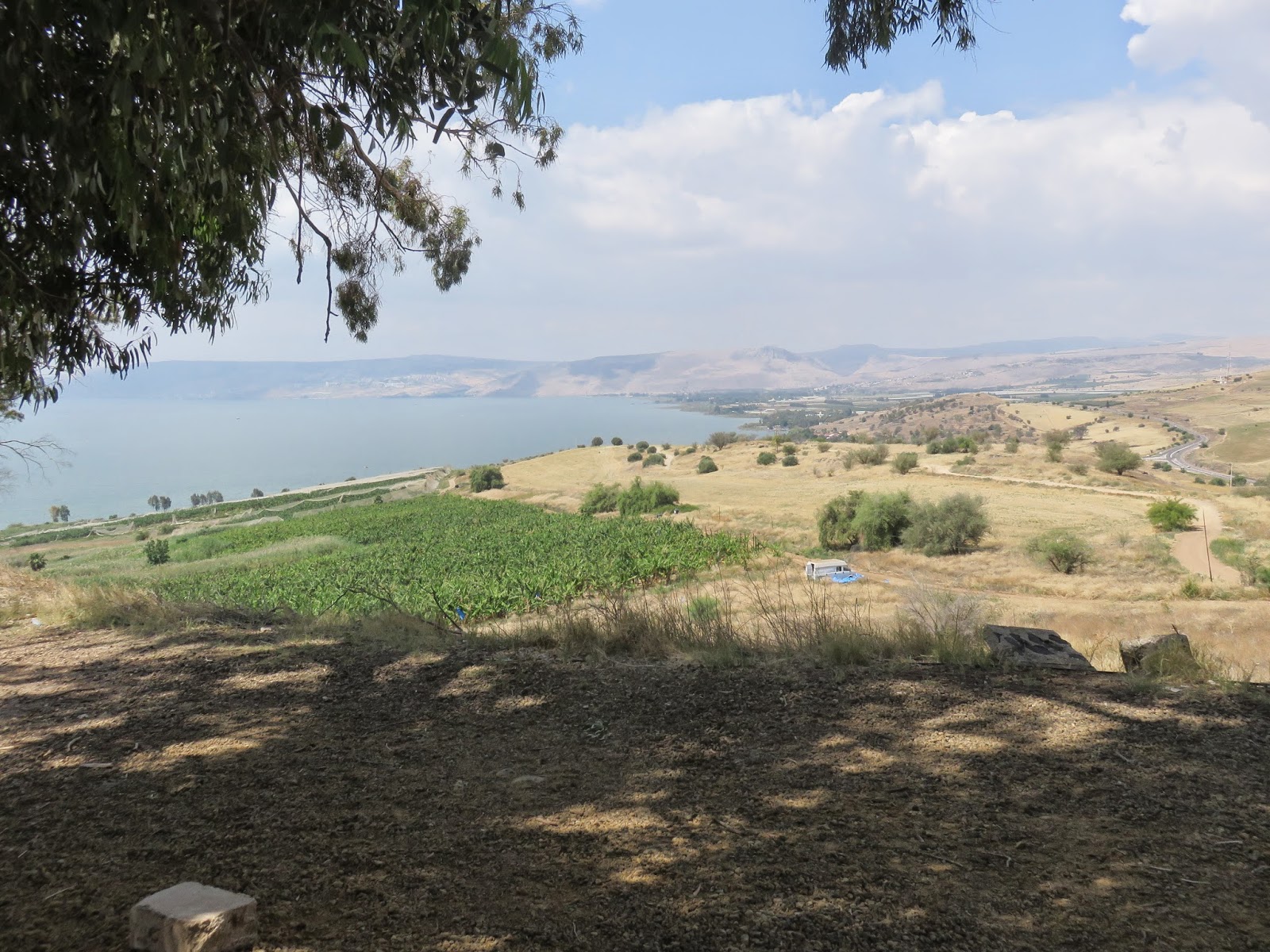 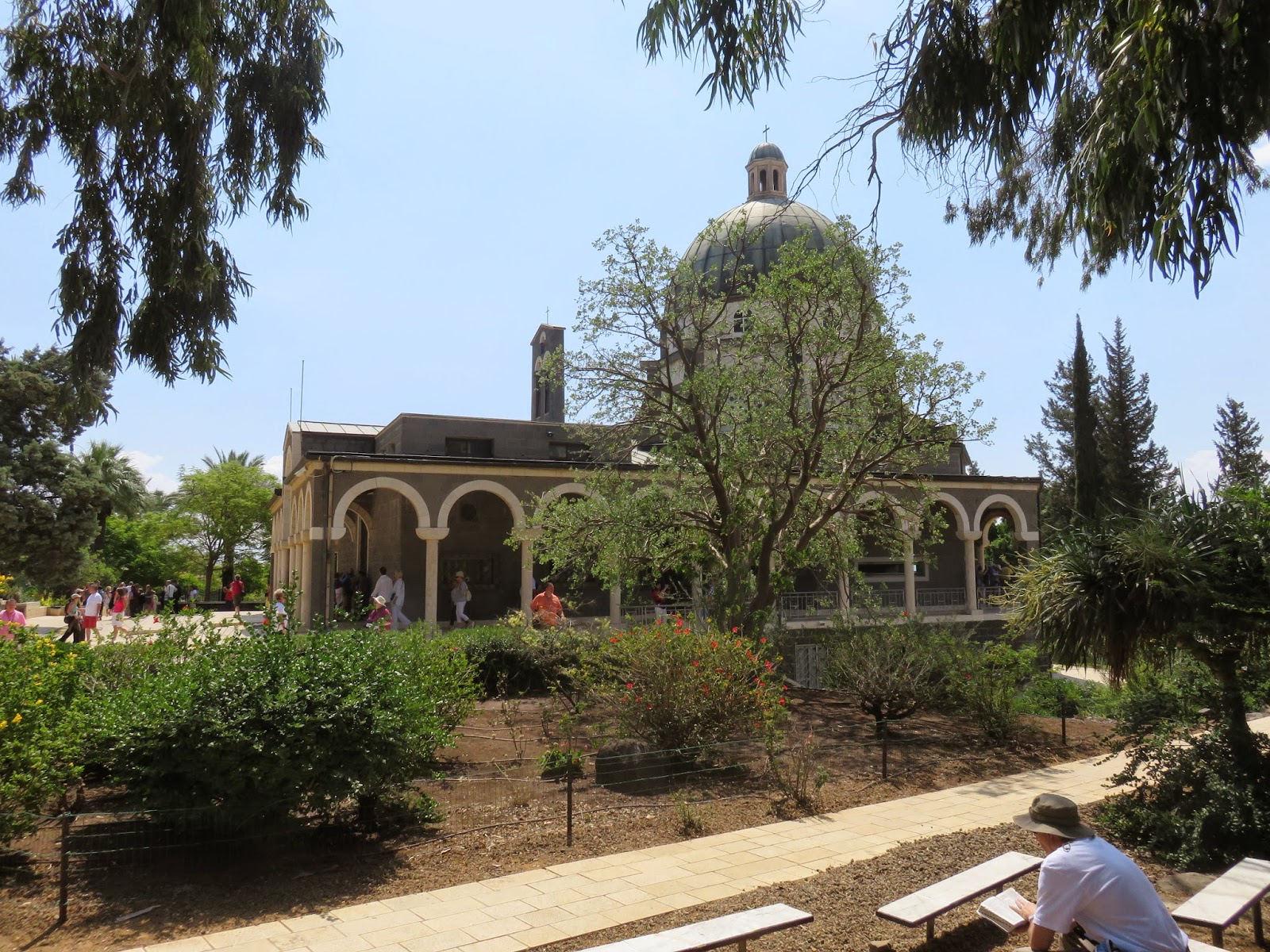 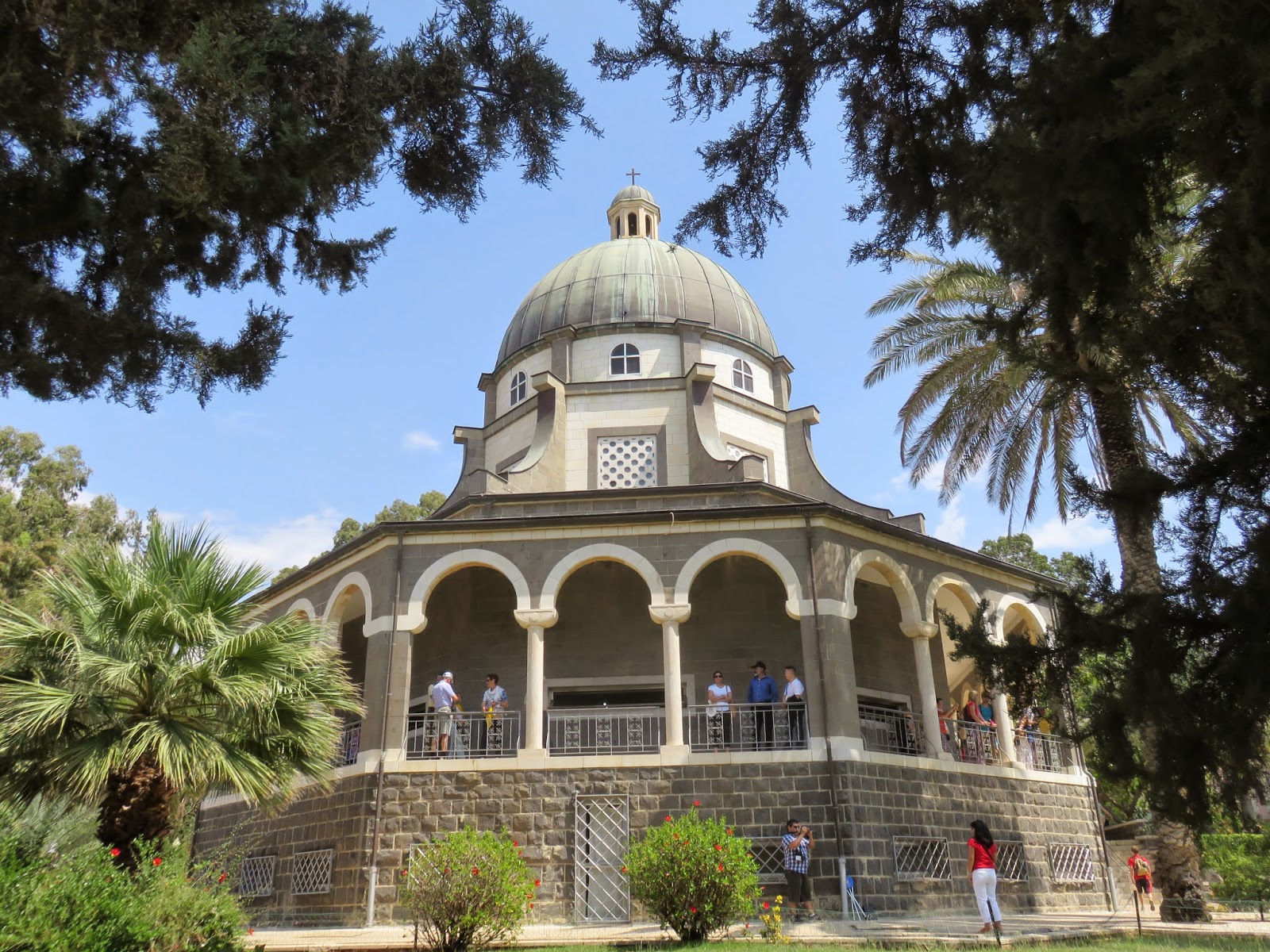 Together our group read from the Sermon on the Mount. Sang "Where Can I Turn for Peace" and "Be Thou Humble." Prayed. Dismissed the group for quiet private time. 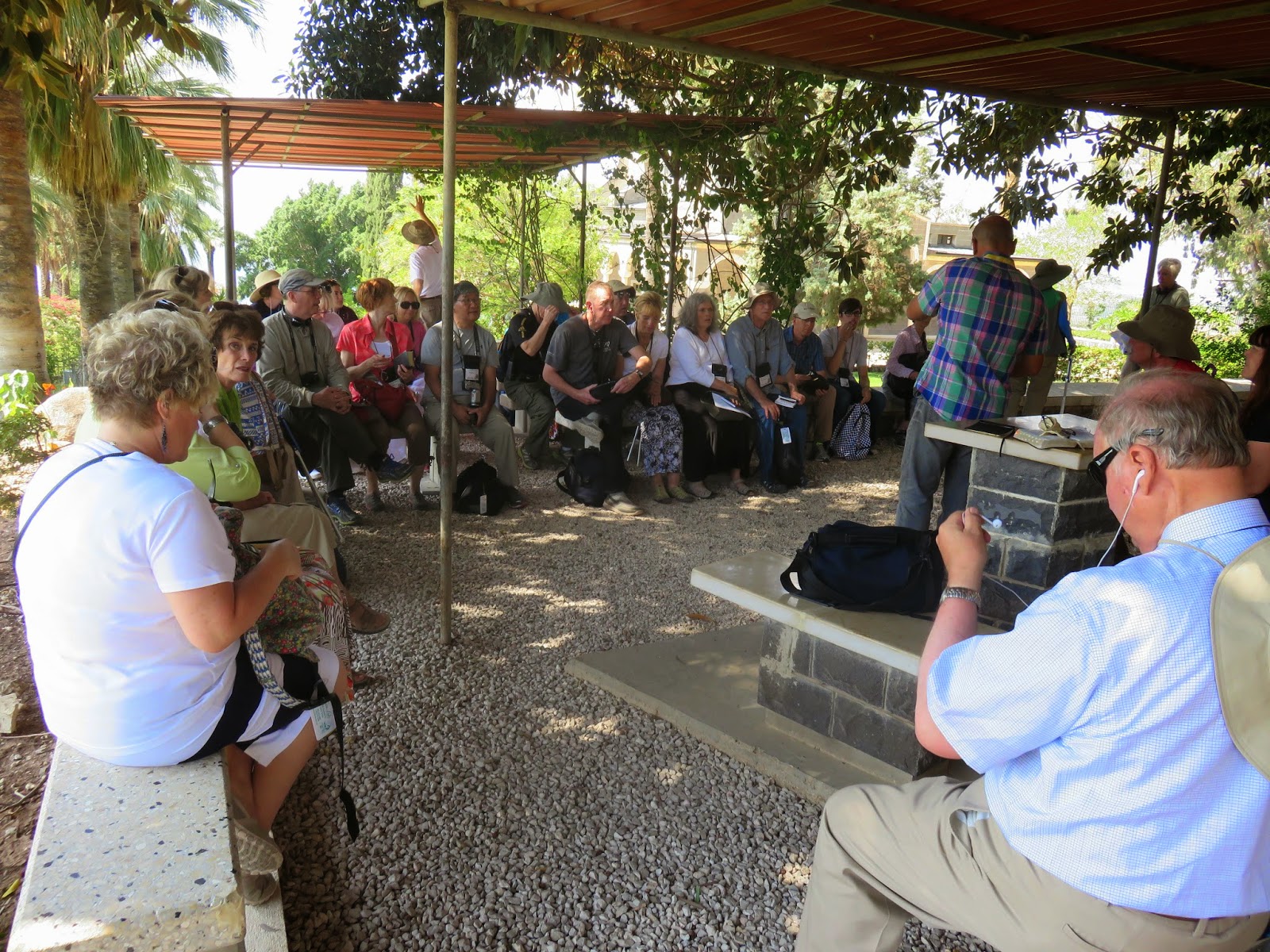 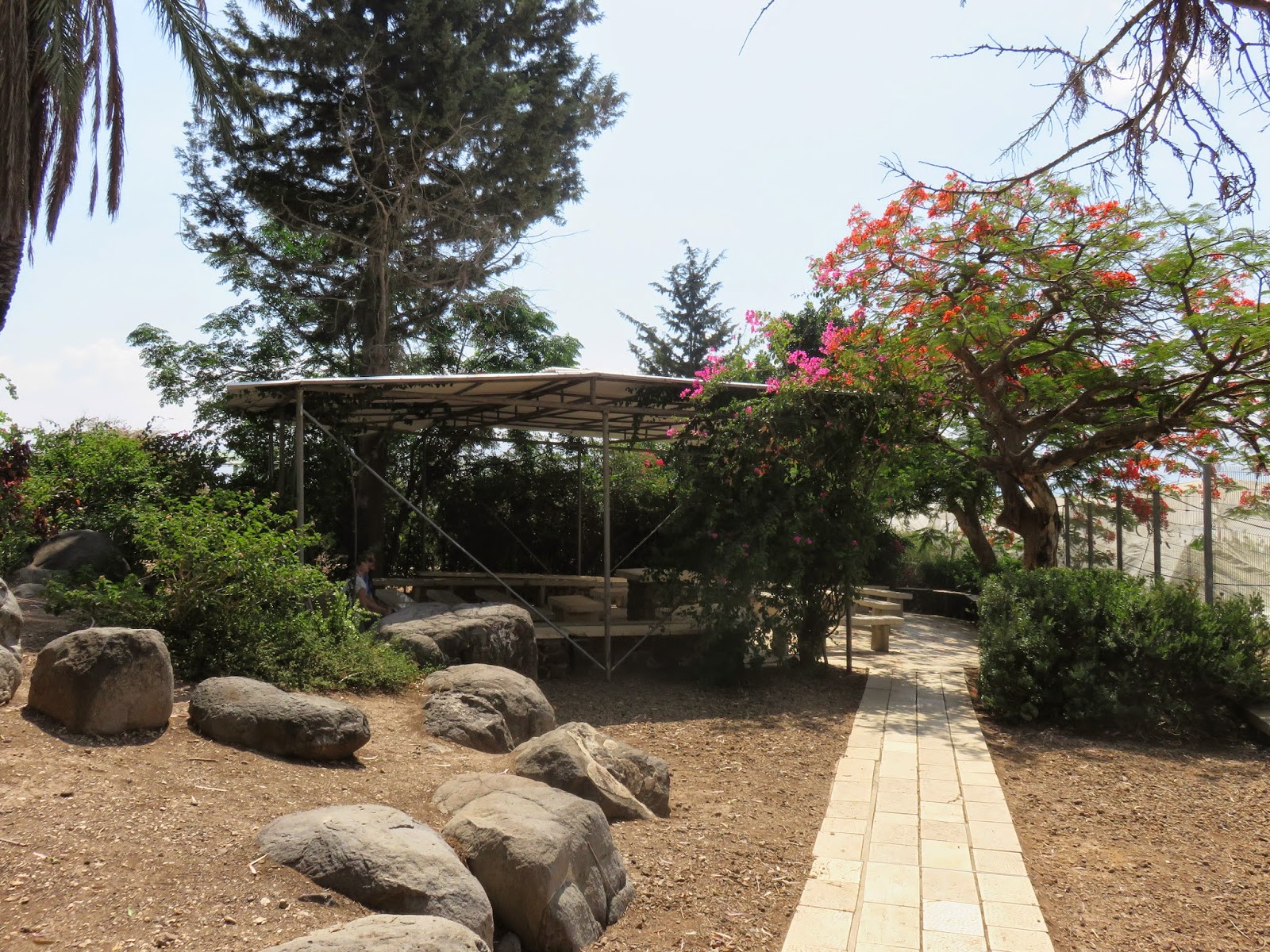 After The Mount of Beatitudes, we headed up into the northern Golan to one of the three headwaters of the Upper Jordan River, Banias.  First we went to Banias Falls and hiked down into a deep gorge to see where the water plummets powerfully in an unexpectedly temperate and moist valley. 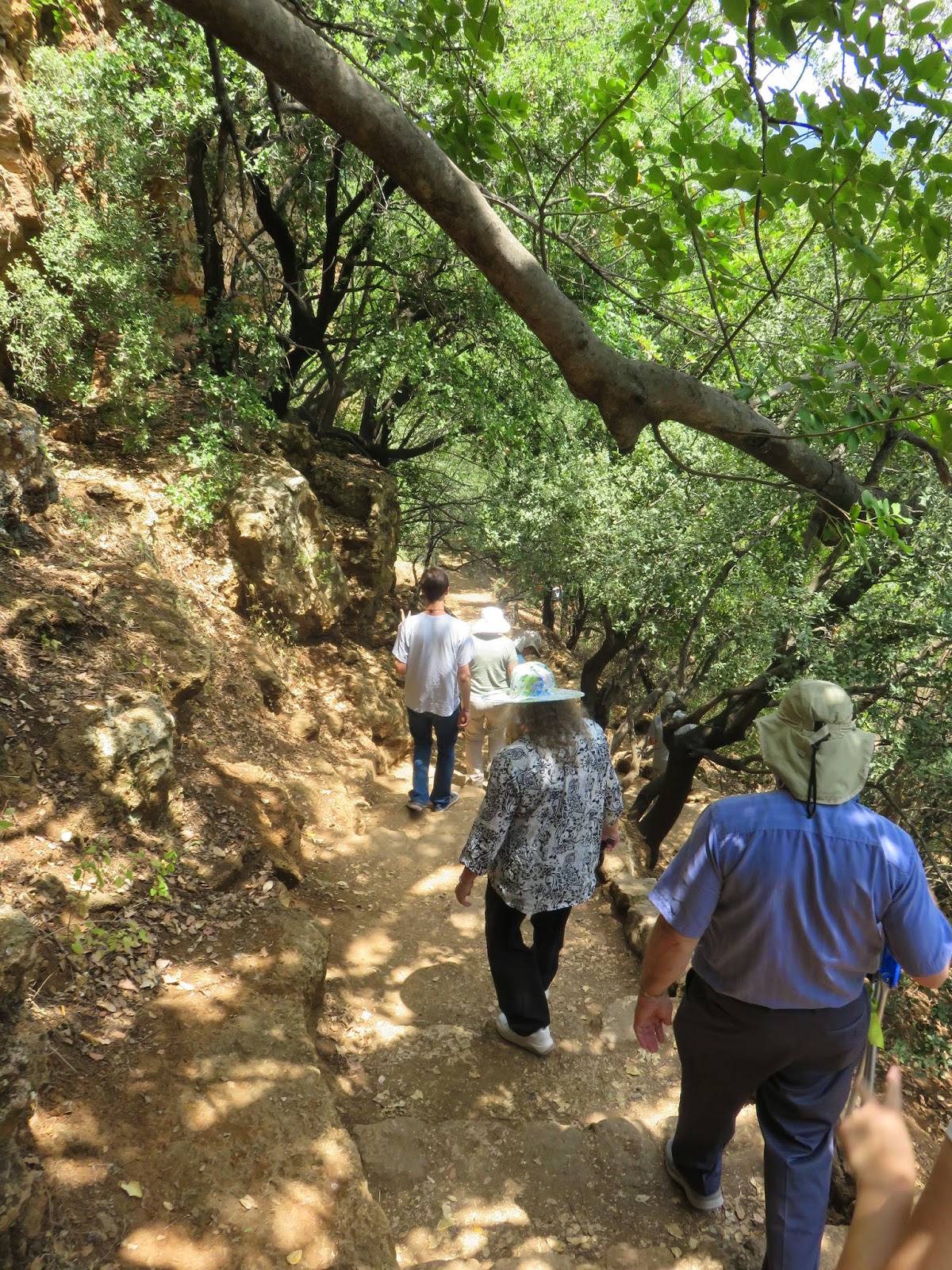 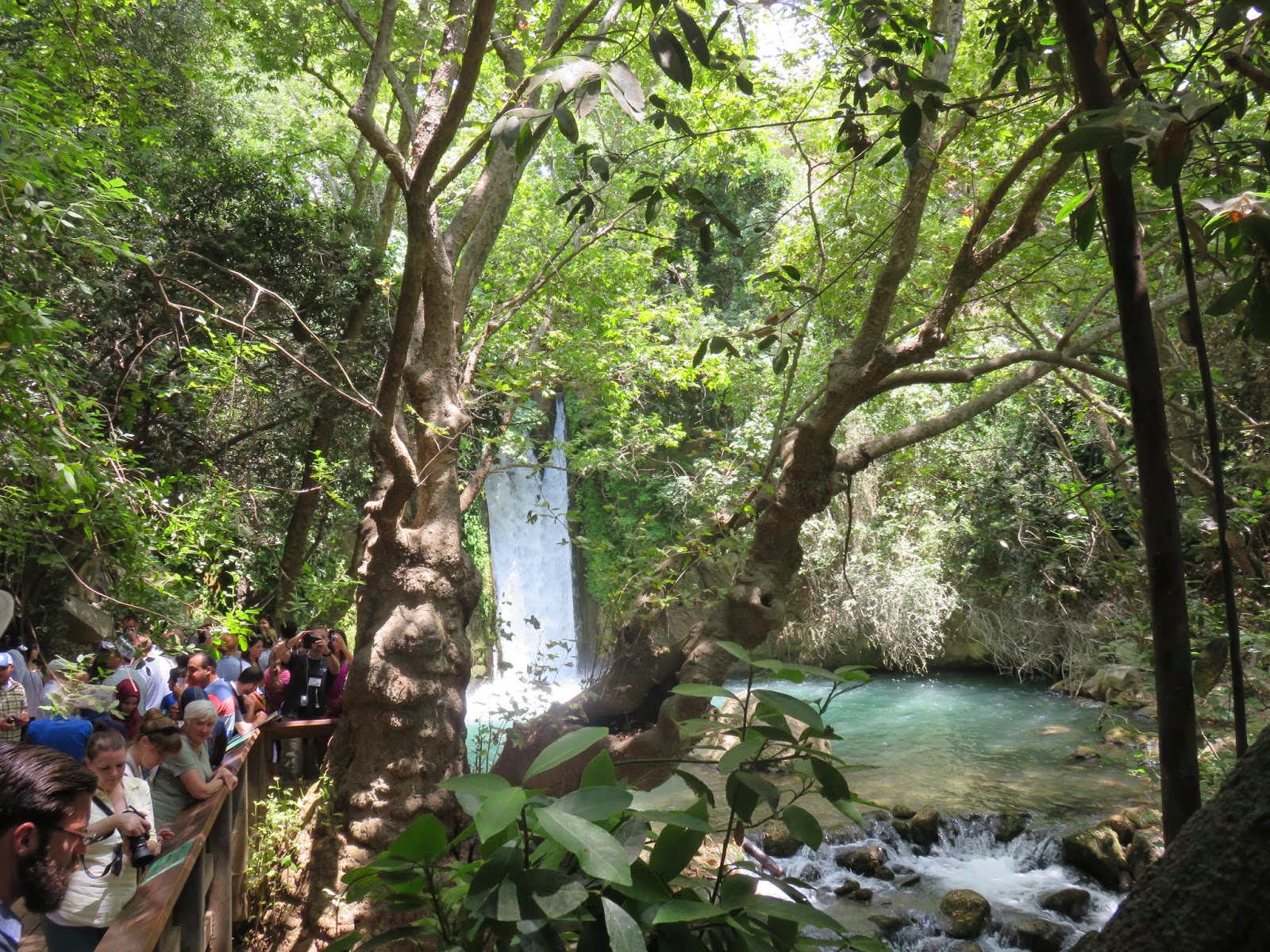 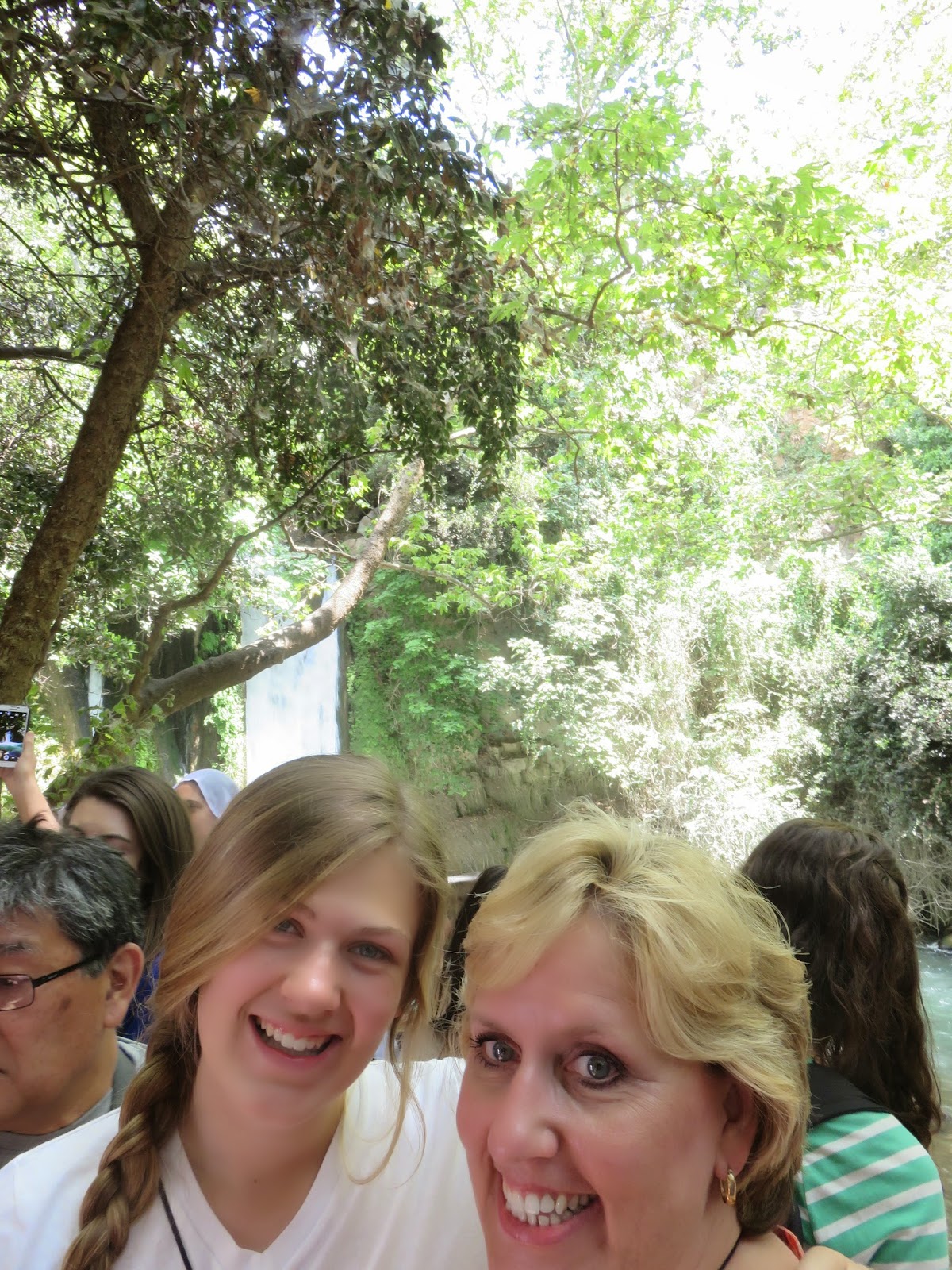 We then continued on to Banias proper, which was the site of the biblical Caesarea Philippi. Used the water flowing from rocks for a John 4 water of life discussion and the one of my favorites, "Rock of Ages." Then did the usual Matthew 16 material and sang "I Believe in Christ." 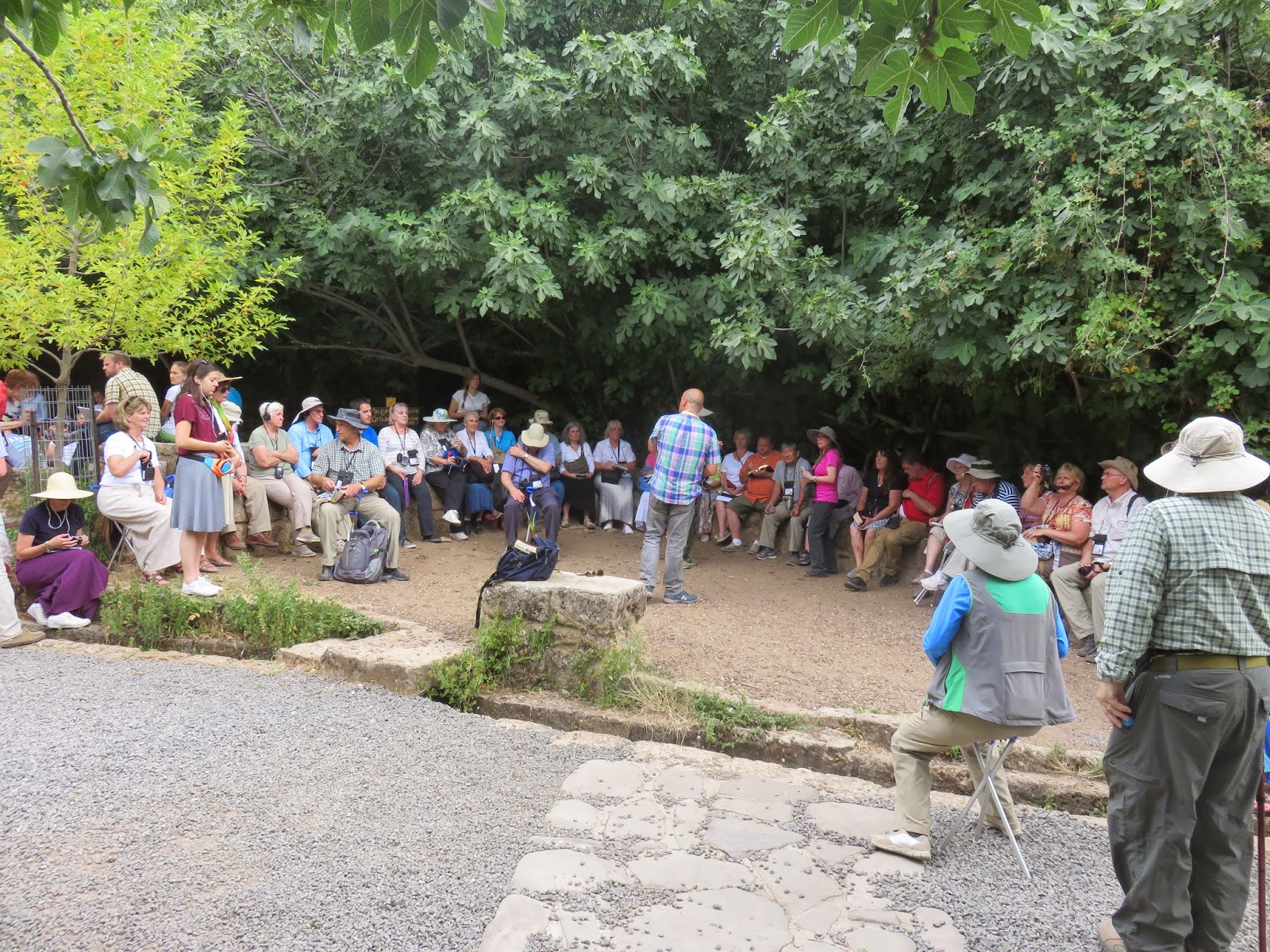 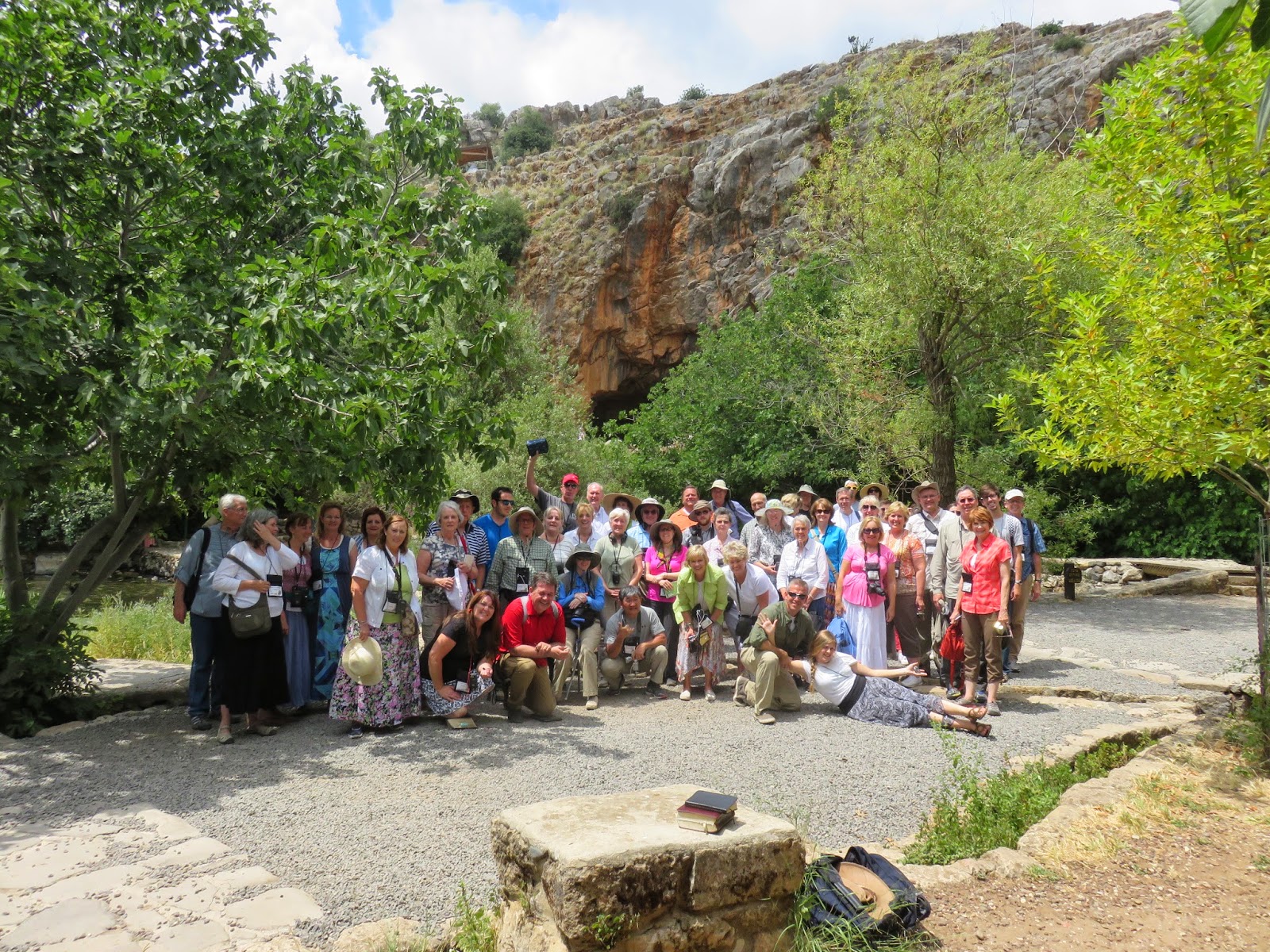 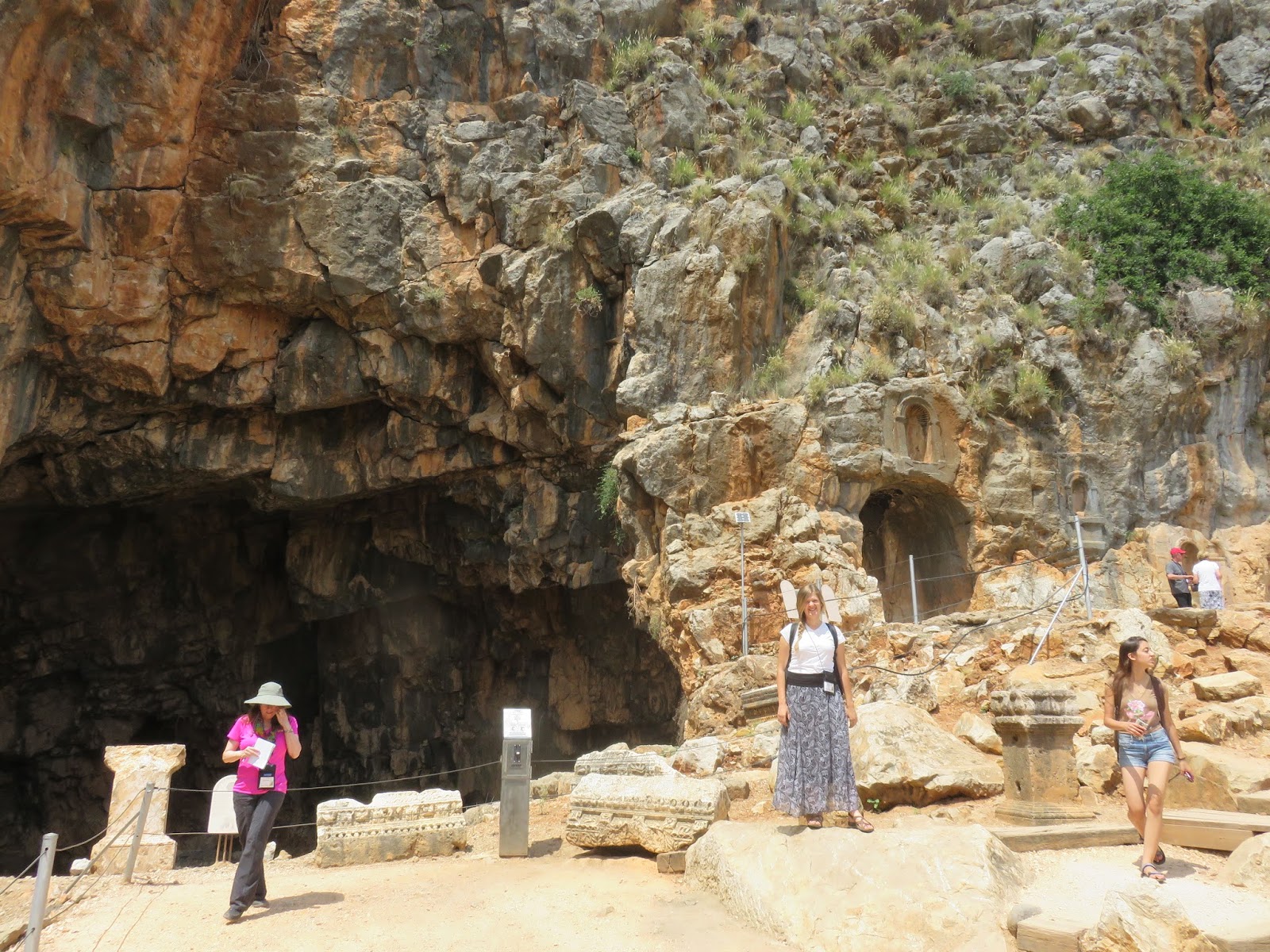 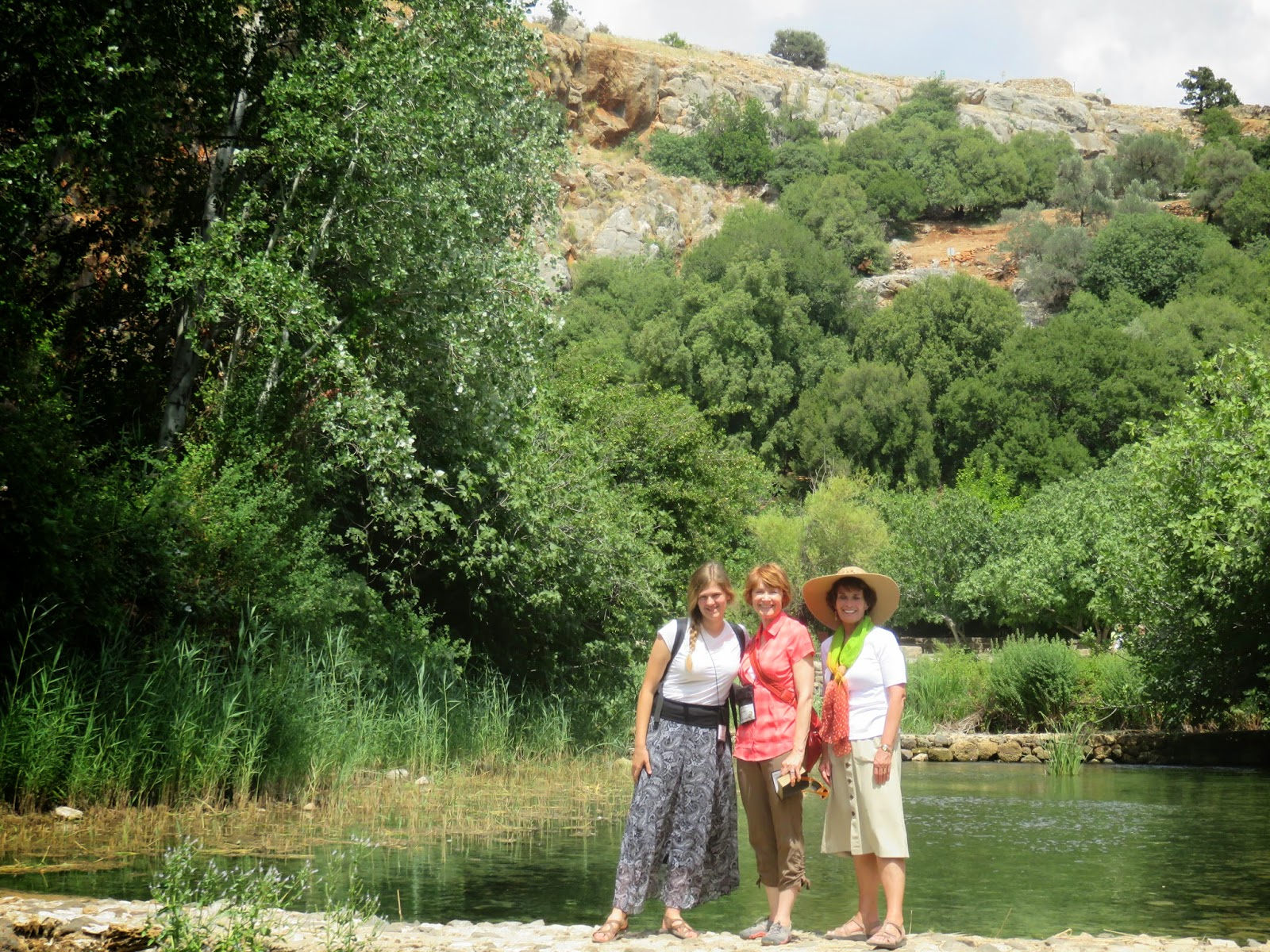 Last stop: Mount Bental, and Israeli outpost from the 1967 and 1873 wars,  in the Golan for a peak into Syria. 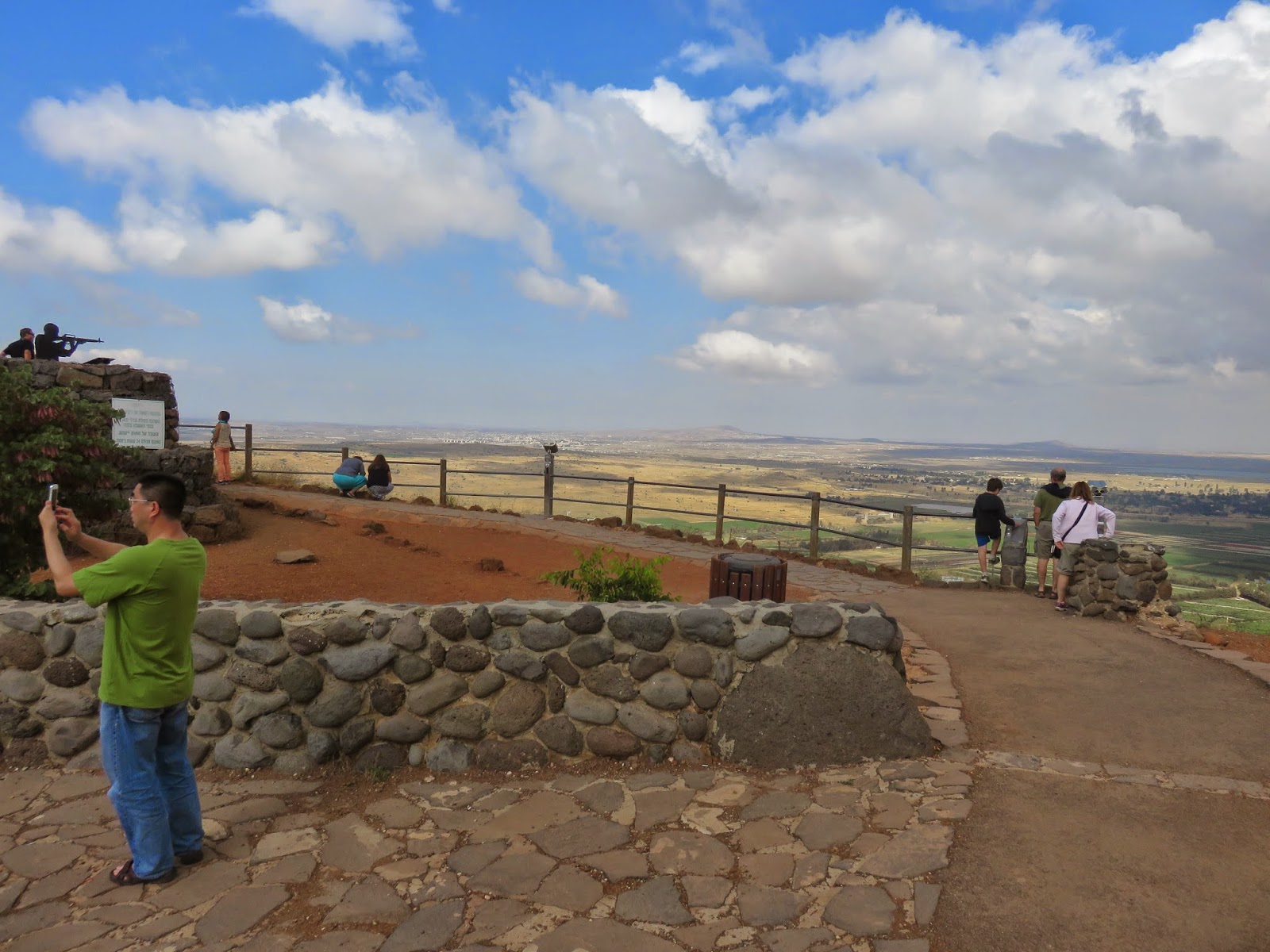 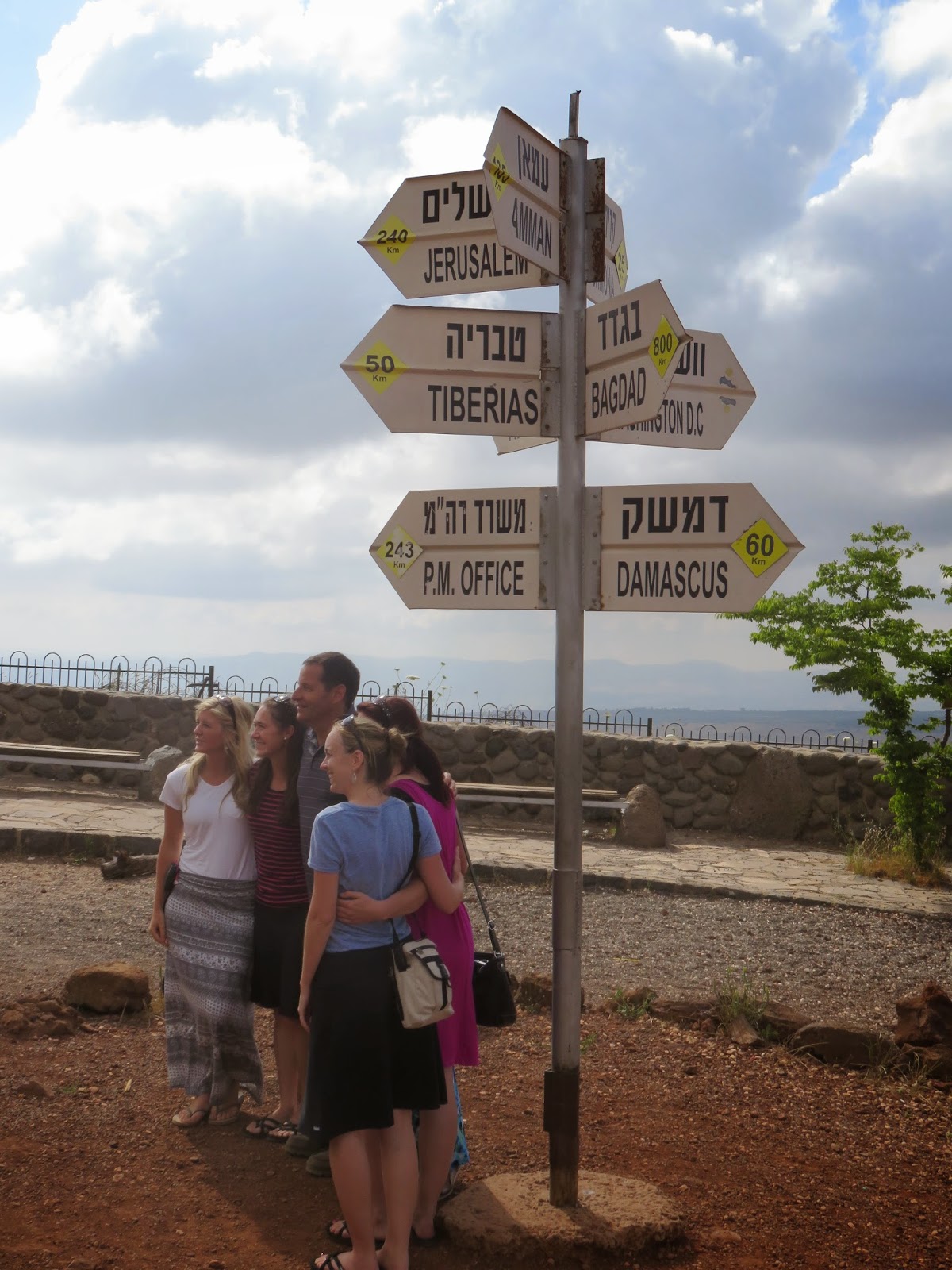 Had sacrament meeting in the basement of our hotel, in a room that I think was actually a bomb shelter. Elder Zaballos presided and spoke, as did Isaac Calvert, Brad Wilcox, and myself. Also got to sing "Jesus the Very Thought is Sweet" with Van Pilkington, Jim Shumway, Debra Ellis Smith, and Rachel Huntsman. 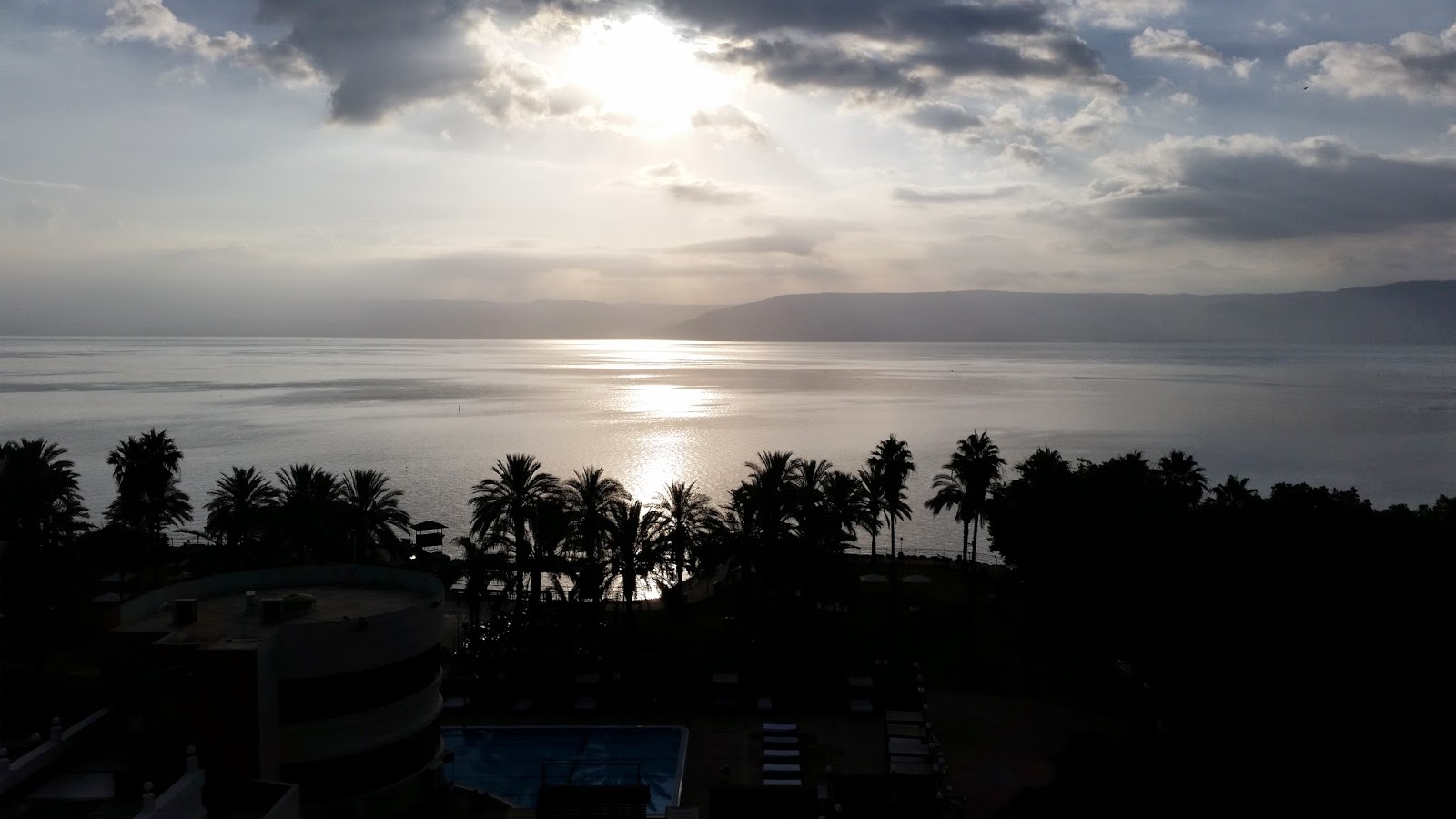