Our tour does not officially begin until tomorrow, but throughout some members of our group began to arrive.  So after breakfast we set out to see the antiquities, and some of the modern sites, of the capital of Jordan, Amman.

First it was Rabbath Ammon, the capital of the Ammonites, cousins of the Israelites (descended, with the Moabites, from Abraham's nephew, Lot).  Sometimes  the scourge of the Israelites (as in the Book of Judges), then conquered by King David, sometimes vassals of Israel, and similarly subjected by Assyrians, Babylonians, and Persians, the Ammonites maintained their identity and their name is still found in the city's modern name of Amman.  From Alexander the Great through the Roman and Byzantine periods, it was a Hellenistic city with the Greek name of Philadelphia.


The citadel, or acropolis, as a high, defensible point, was the first place settled in Amman.  On it are remains from virtually every period of the city's history.  Their are traces of caves from the Neolithic period and caves that were used for storage and burials from the early Bronze Age. 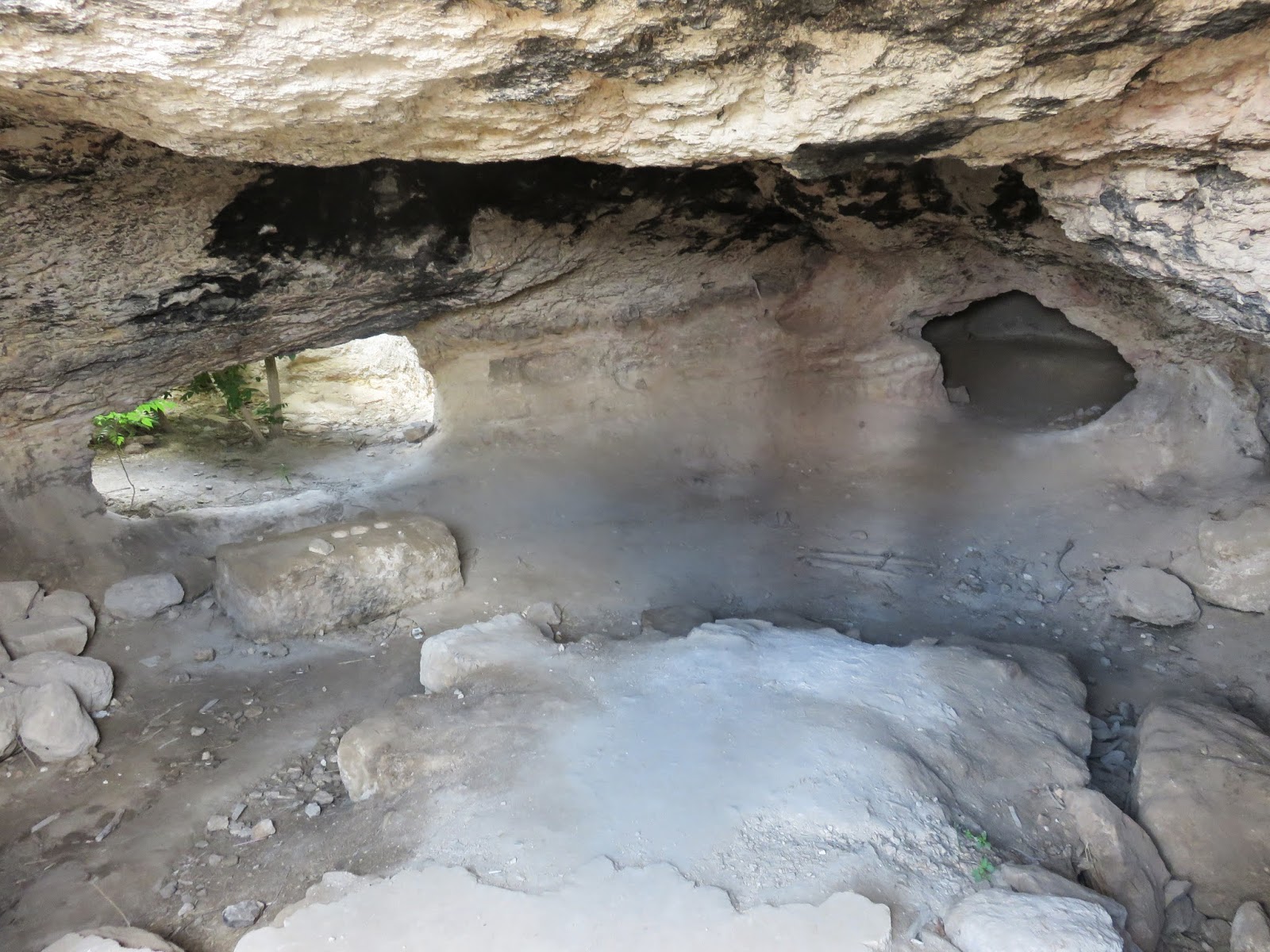 Perhaps the most imposing remains of a monument are the Greco-Roman temple of Hercules.  The national god of the Ammonites had been Milcom.  The Greeks syncretized him with their hero/god Herakles, who was of course the Roman god Hercules. He was worshiped here through the Roman period, until Christianity finally brought an end to his worship. 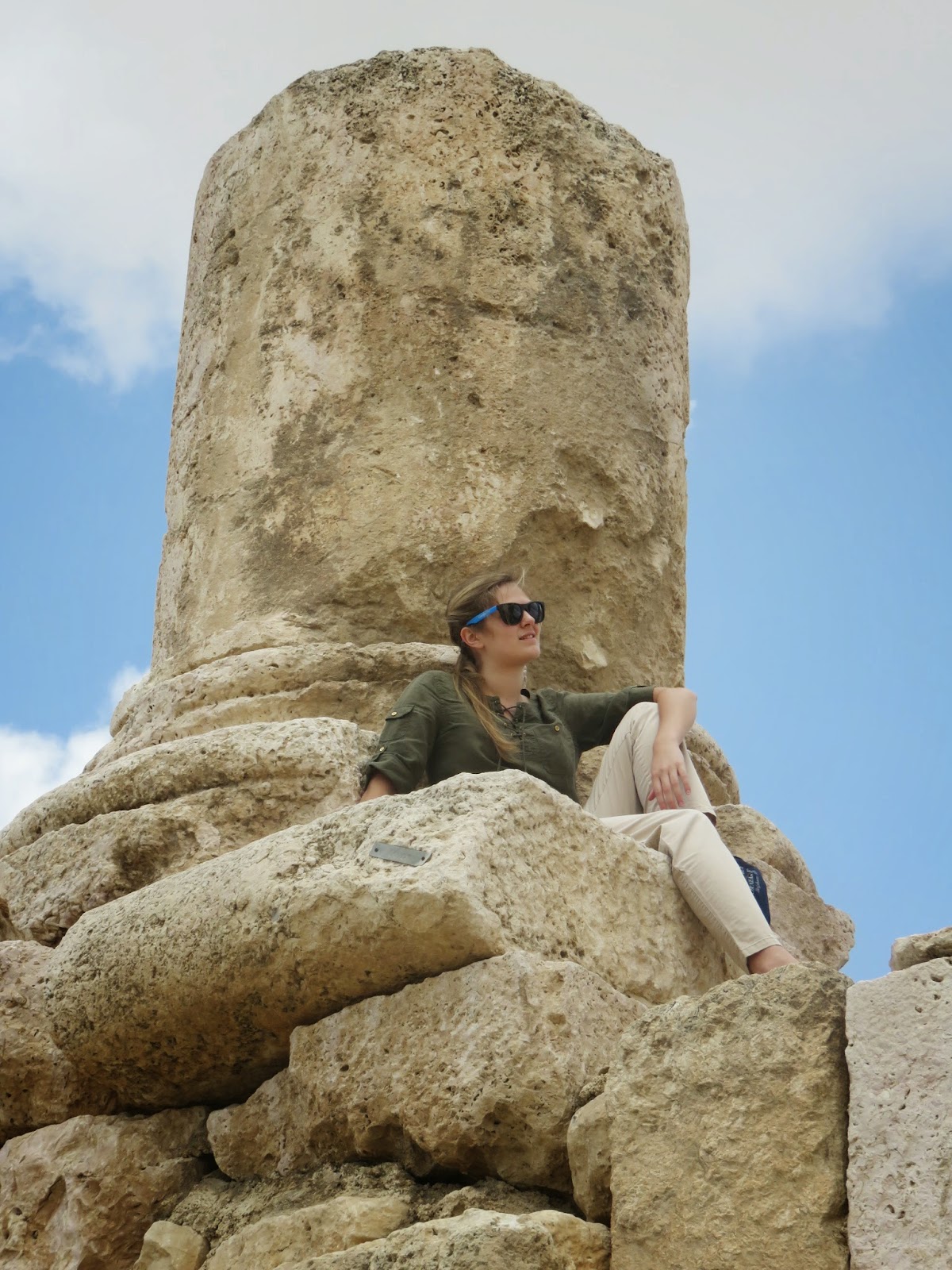 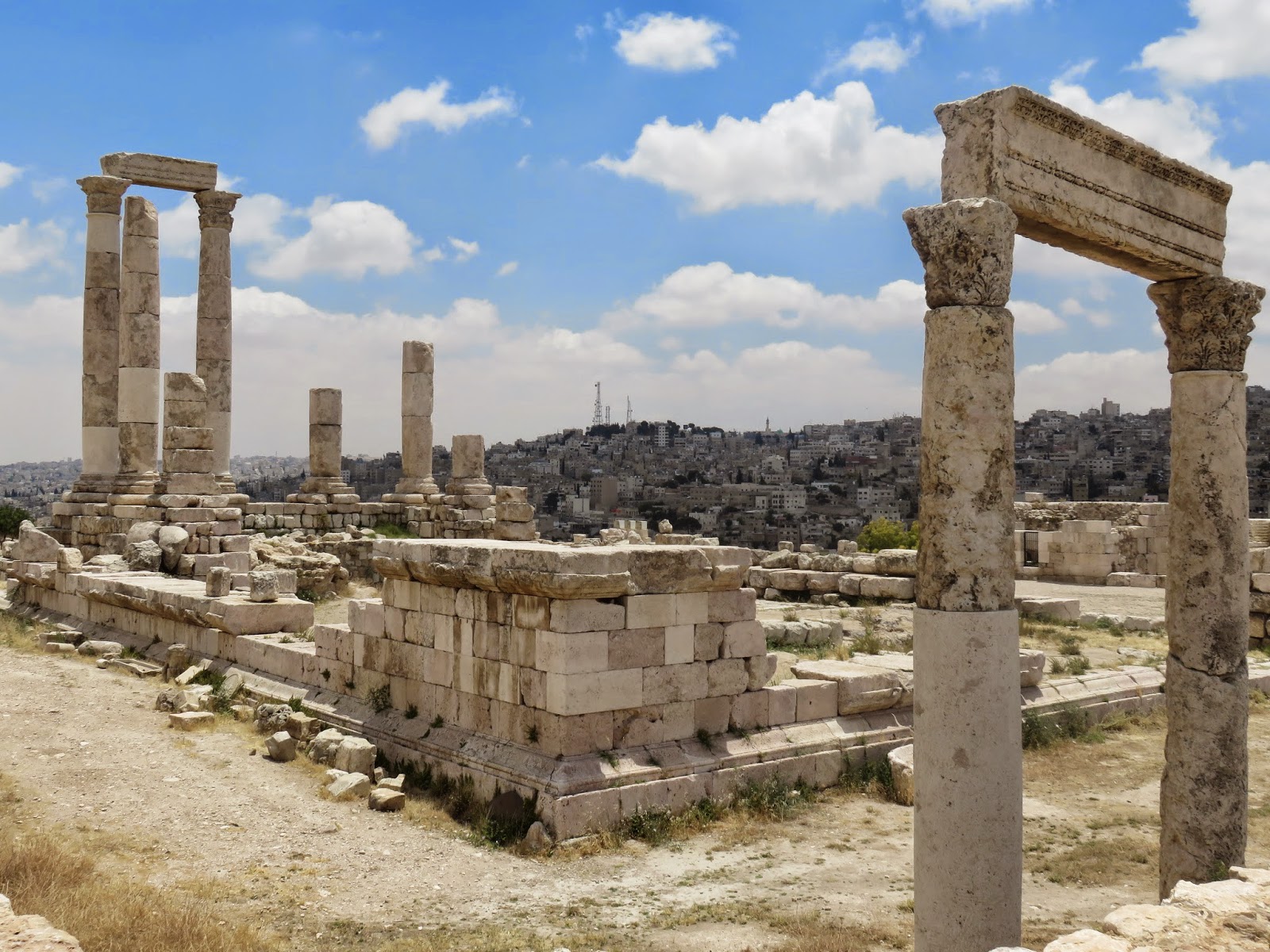 After that we spent a bit of time in the old, small museum at the citadel.  Despite its size, it has a good representation of artifacts from throughout the history of the site.  In front of it are a few pieces of the once colossal statue of Hercules from the temple. 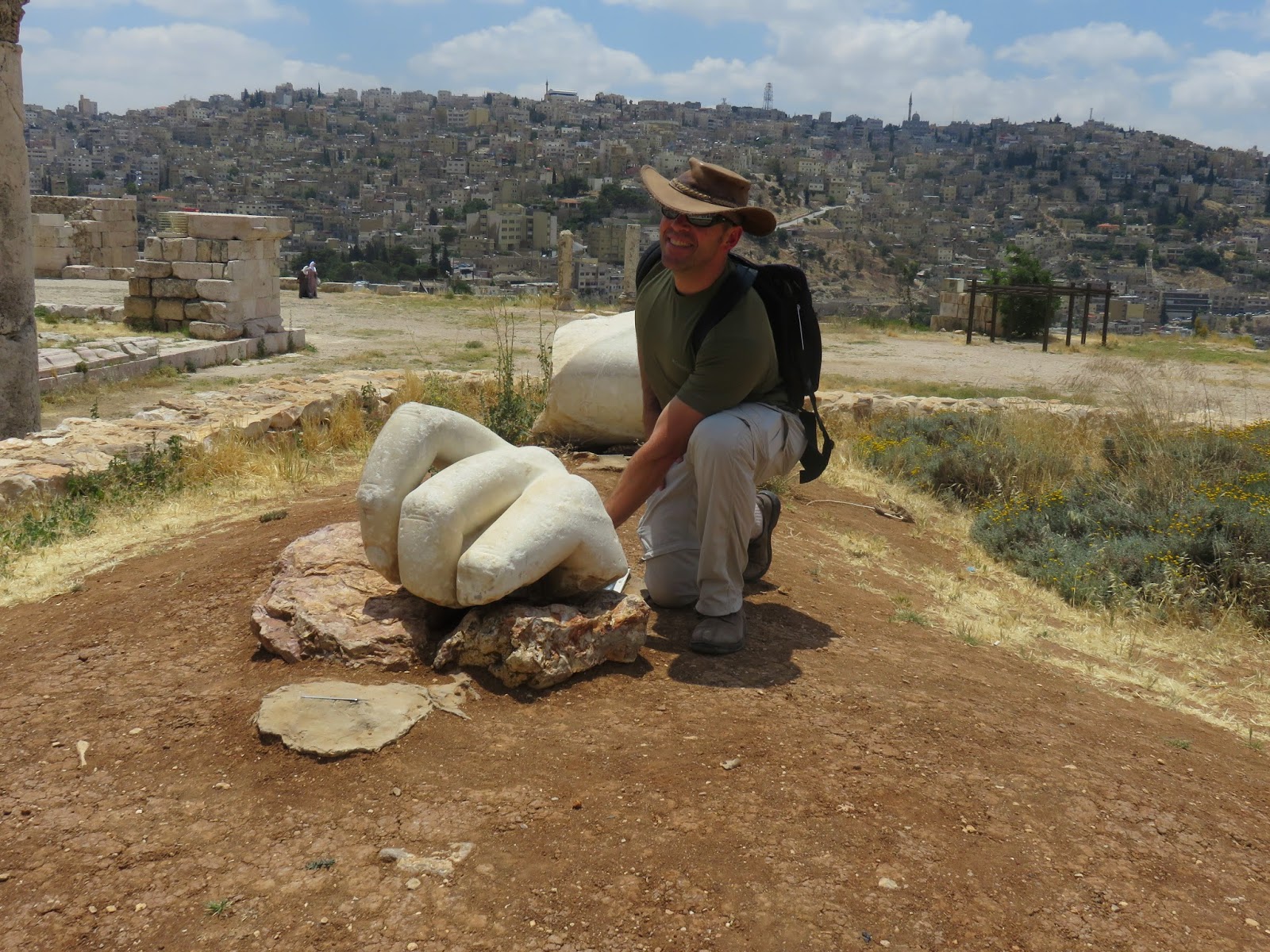 After the museum we walked around to the remains of the Byzantine-era Christian church.  I began to indoctrinate the few tour members with us with the mantra that all my JC alums will remember well: What's great about Byzantines?  "Greek-speaking, Christian, Romans!" 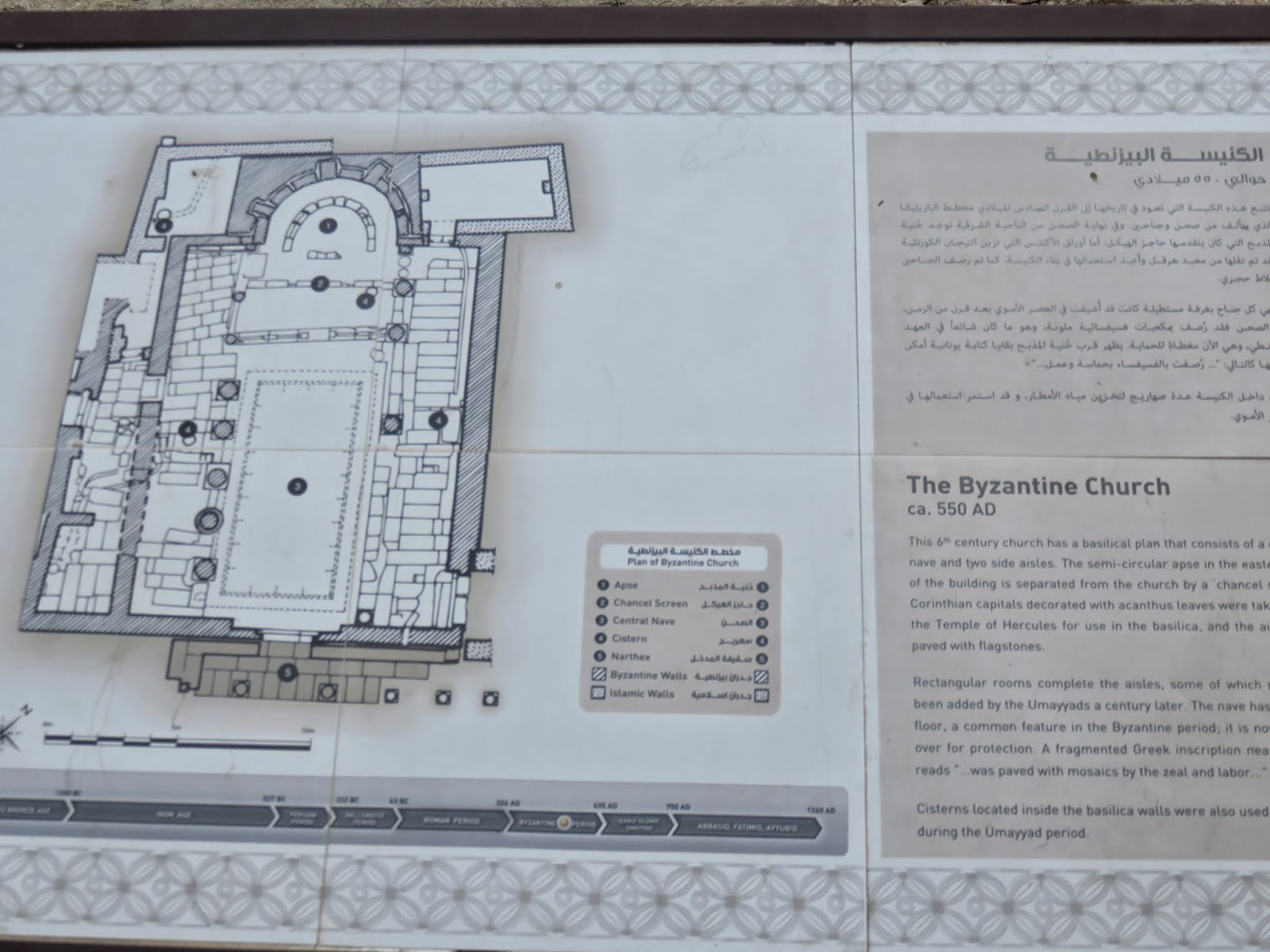 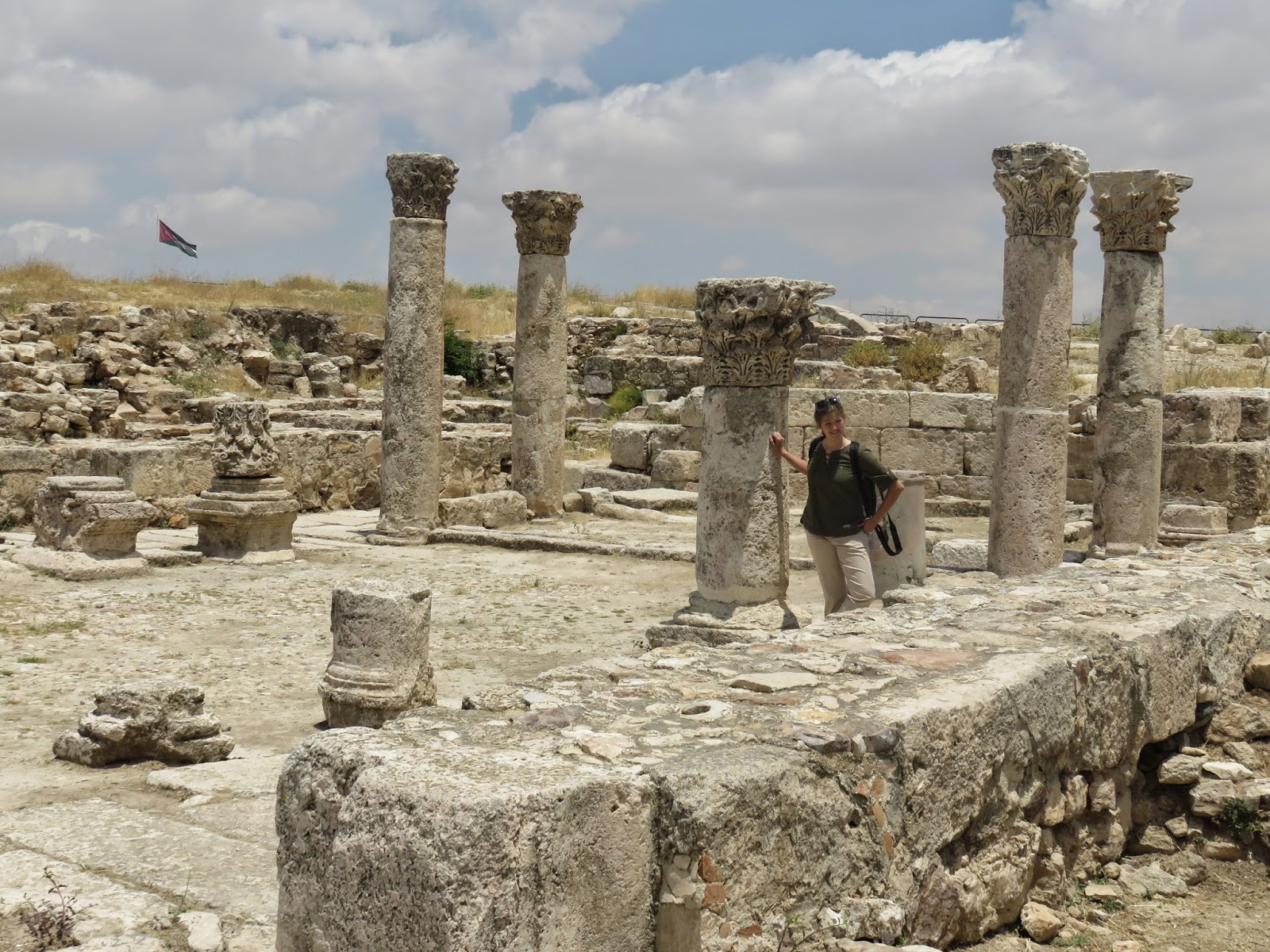 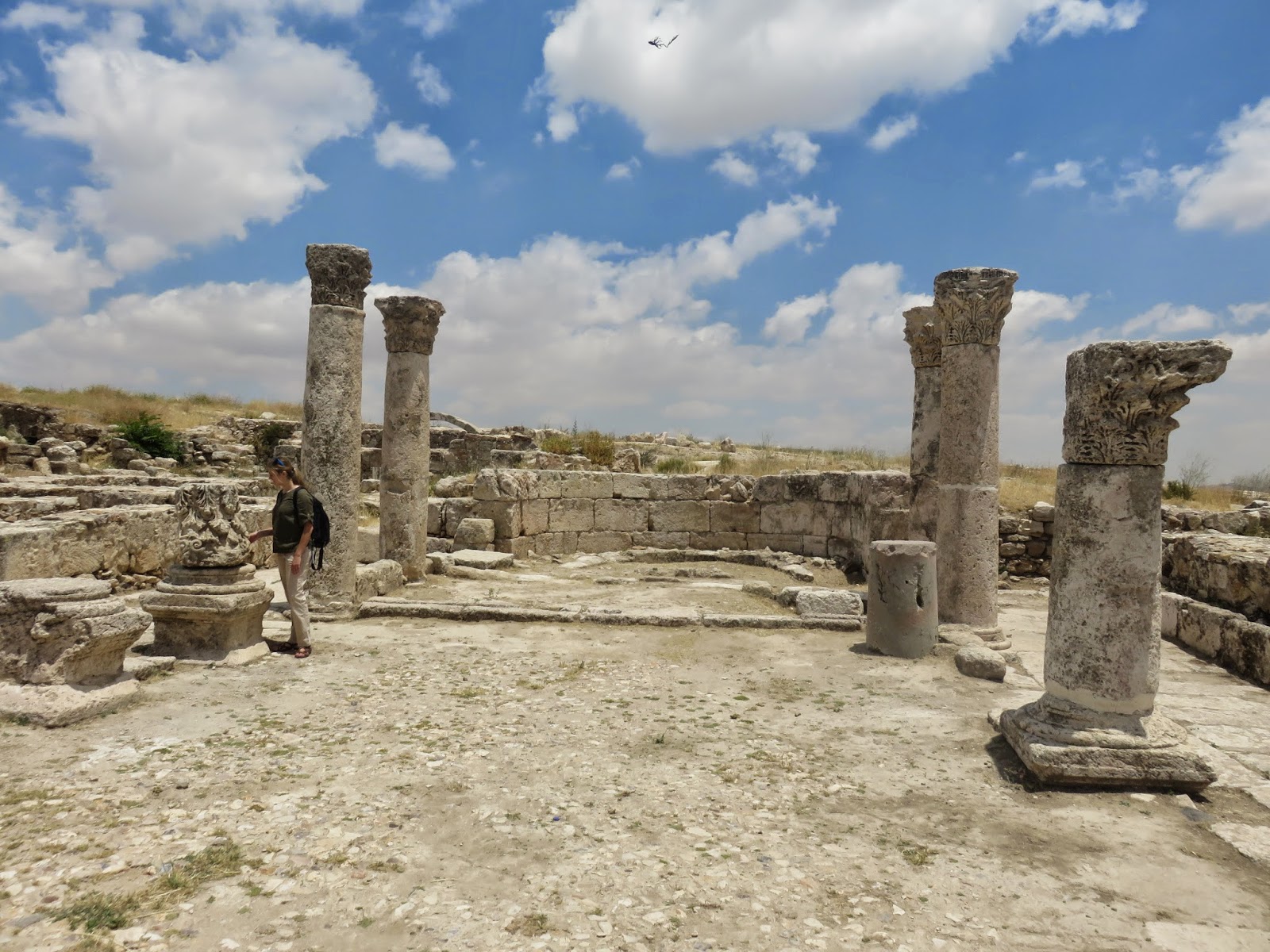 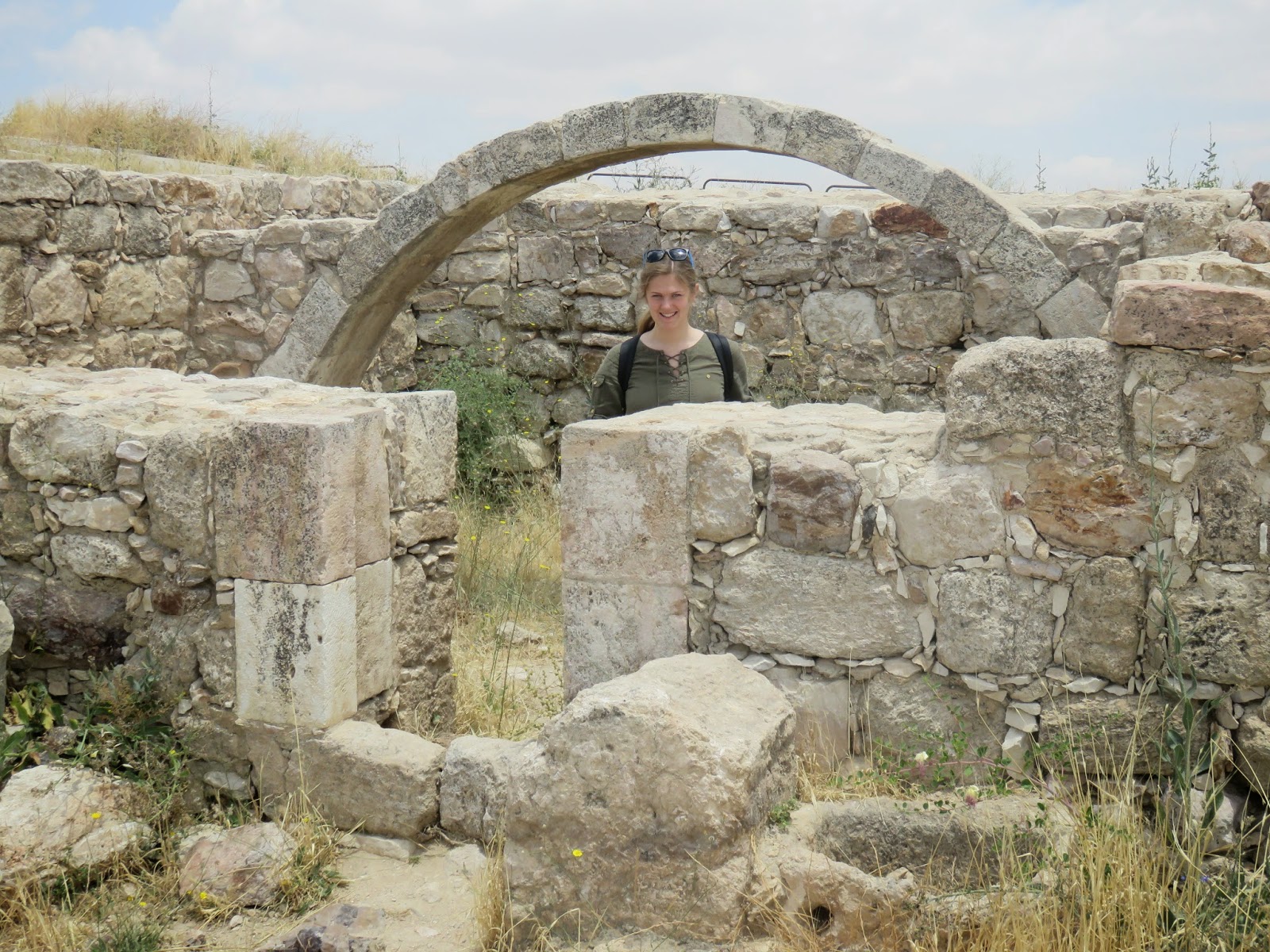 On the far side of the Citadel are two monuments from the Ummayad or early Islamic period.  One is an early mosque.  The other is an Ummayad palace, which has a reconstructed, wooden dome on top of it to give an idea what it would have been like. 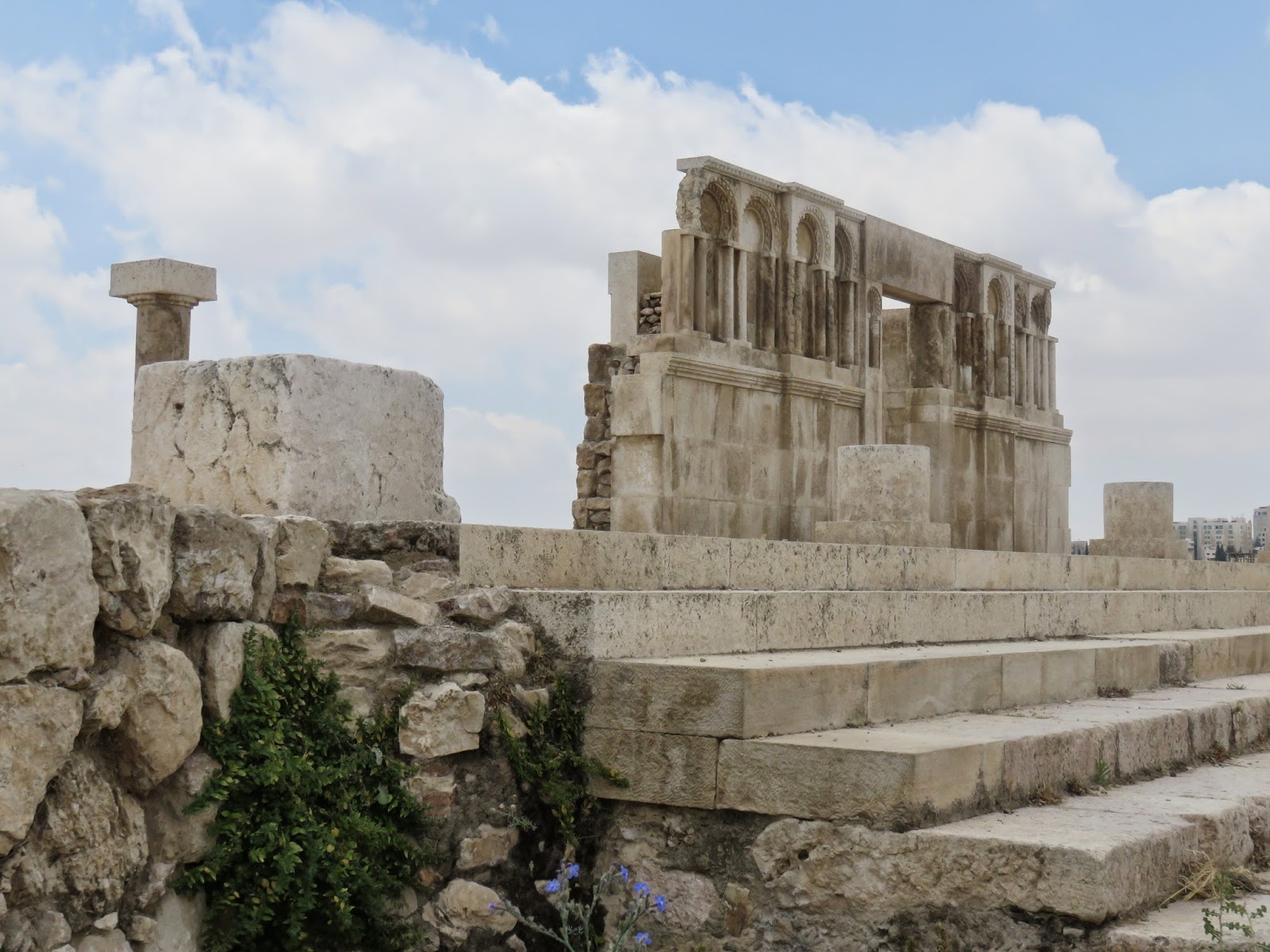 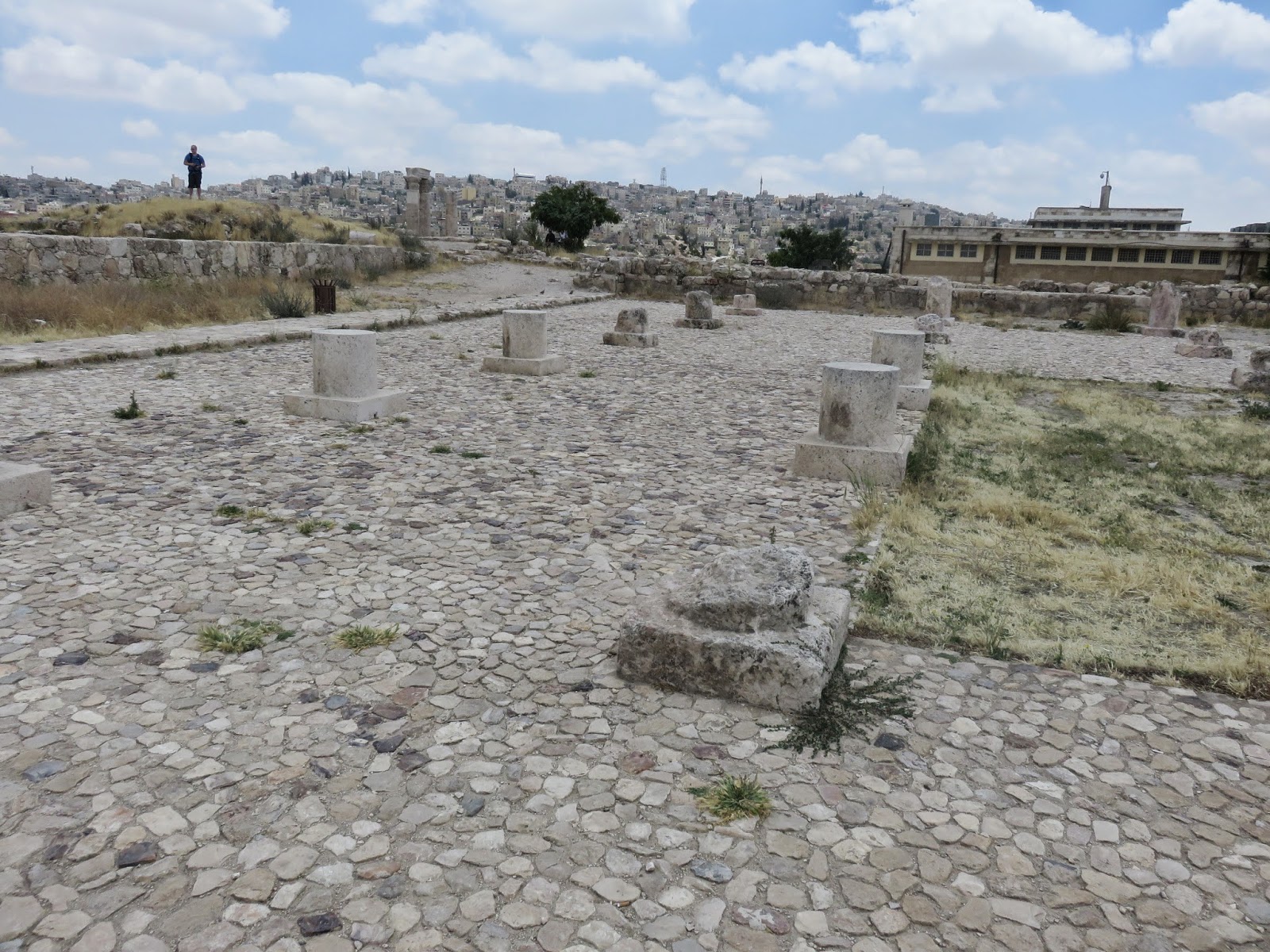 Appropriately enough, while we were there the Muslim call to prayer began, the first time we have heard that since we were here (our hotel is too well insulated for us to hear it last night or this morning).

Here are some shots of the Ummayad Palace. 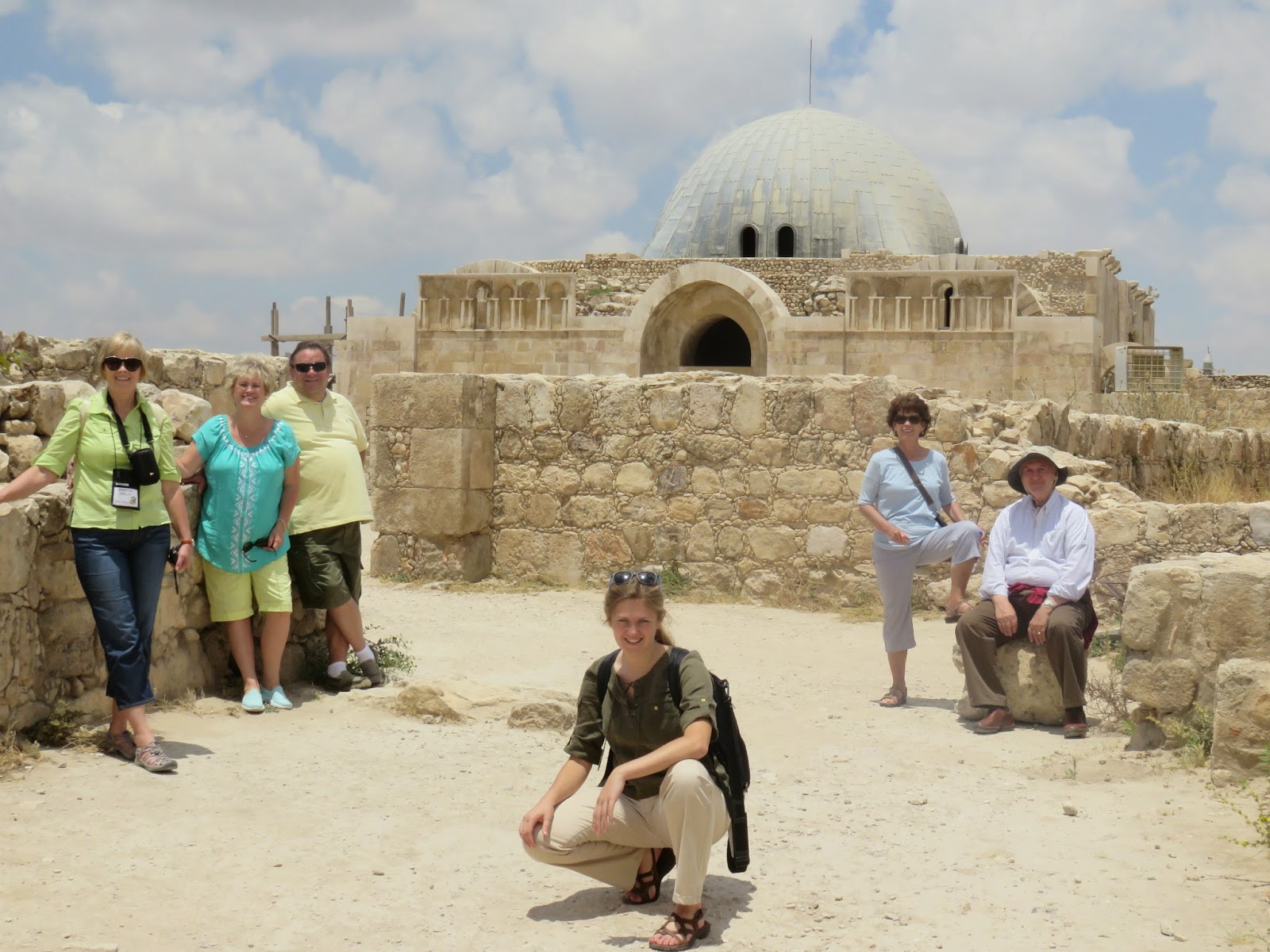 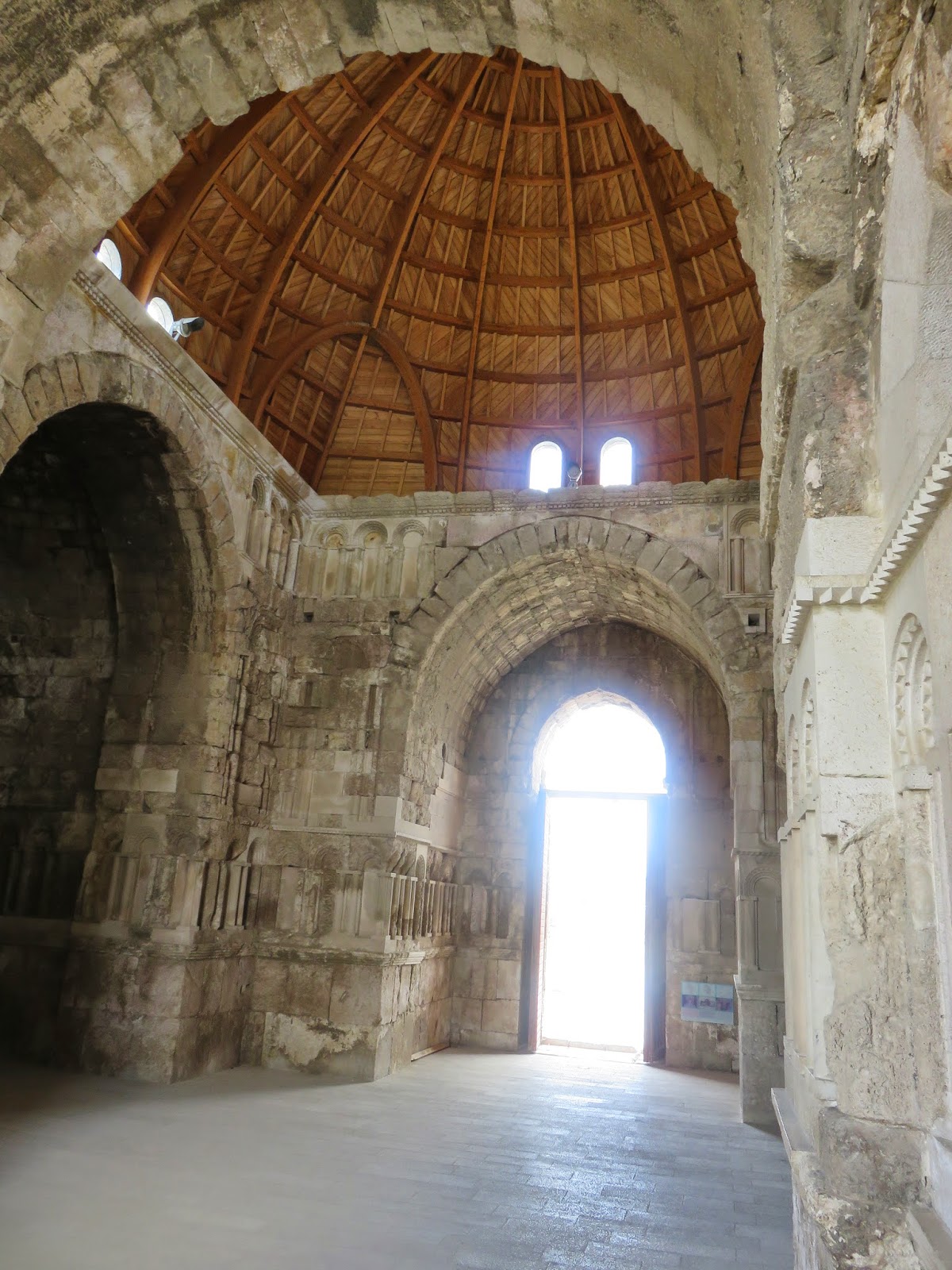 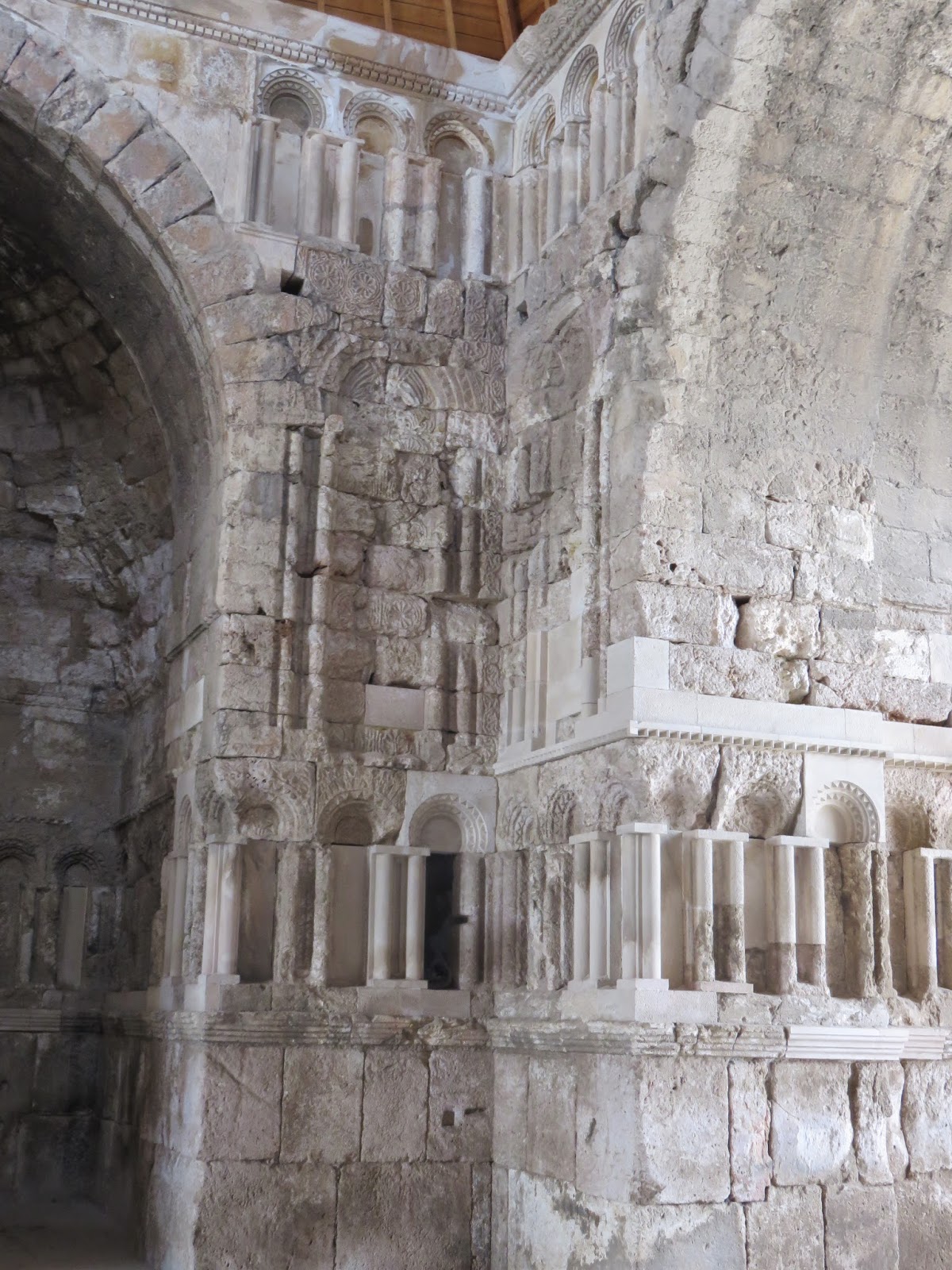 Watch the video of the Temple of Hercules and the Roman Theater.

After our exploration of the Citadel, we walked down the high hill and around to the the remains of the Roman theater below.  The center of the Hellenistic city had been here, below the acropolis, and the Romans later renovated and expanded the earlier Greek theater on the site.  Jim and I sang a verse of "High on the Mountain Top" here to test the acoustics, but we are waiting to save the real singing and 4-part harmony until Van Pilkington and Debra Smith join us in Israel!  :) 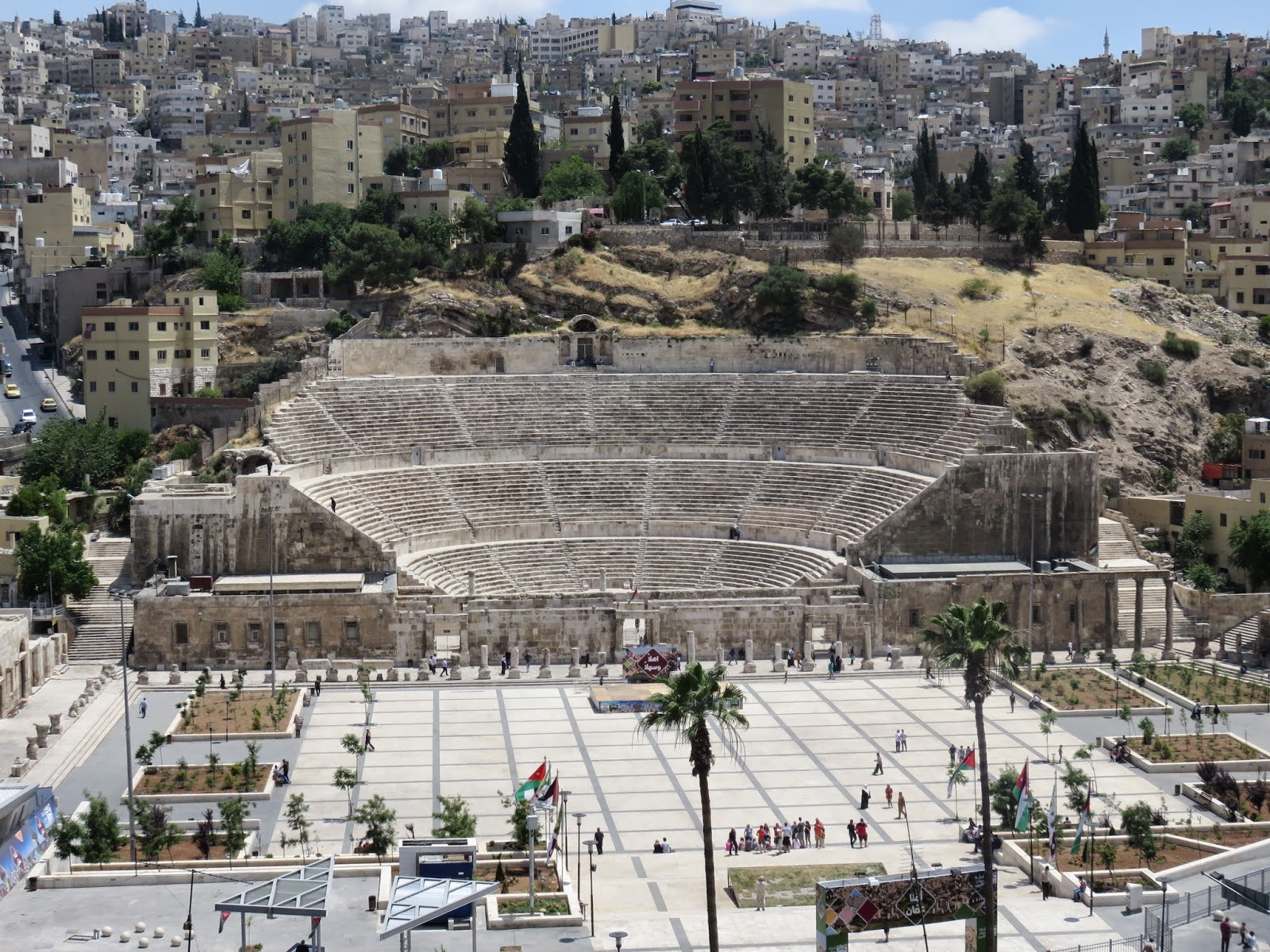 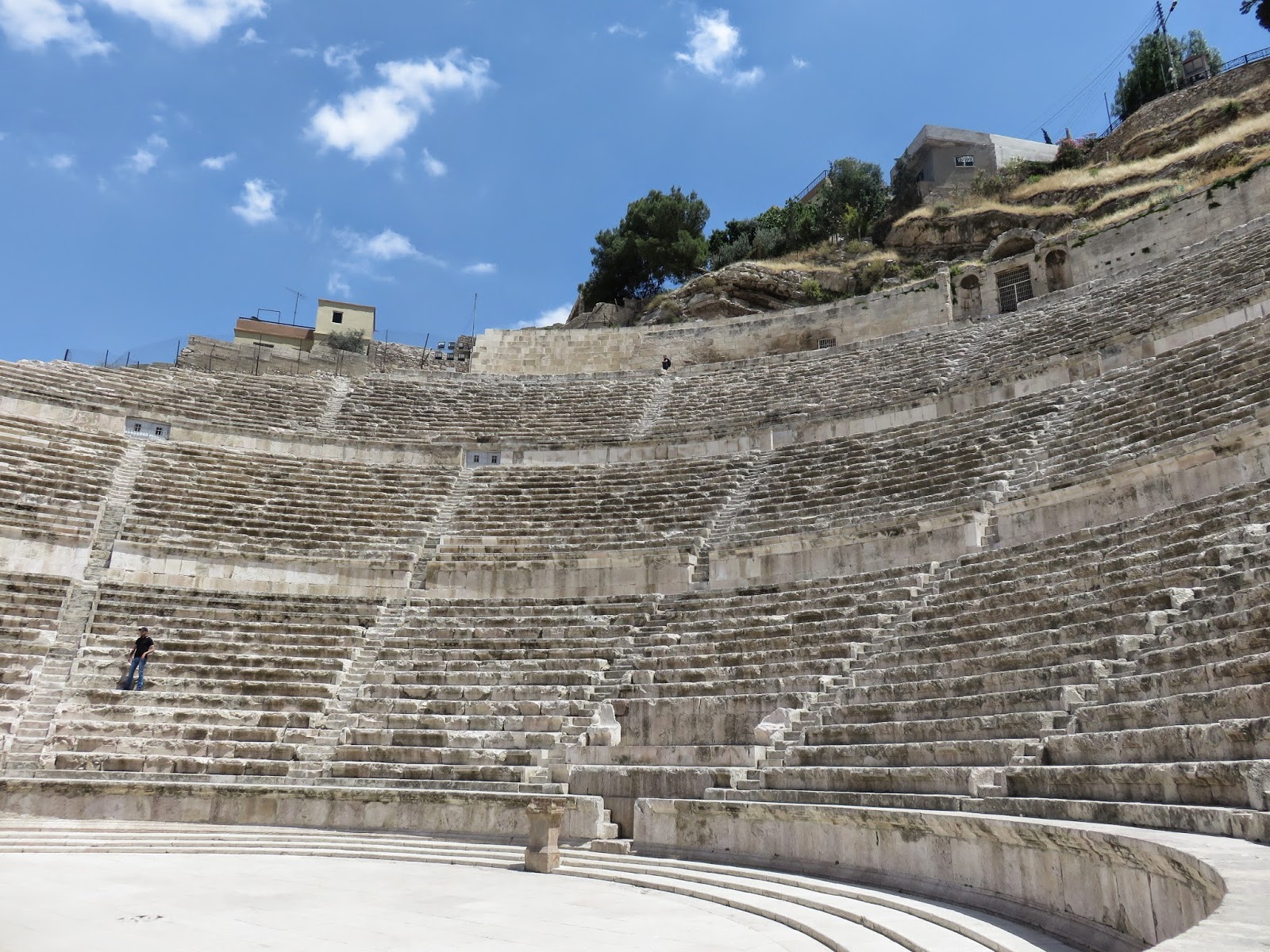 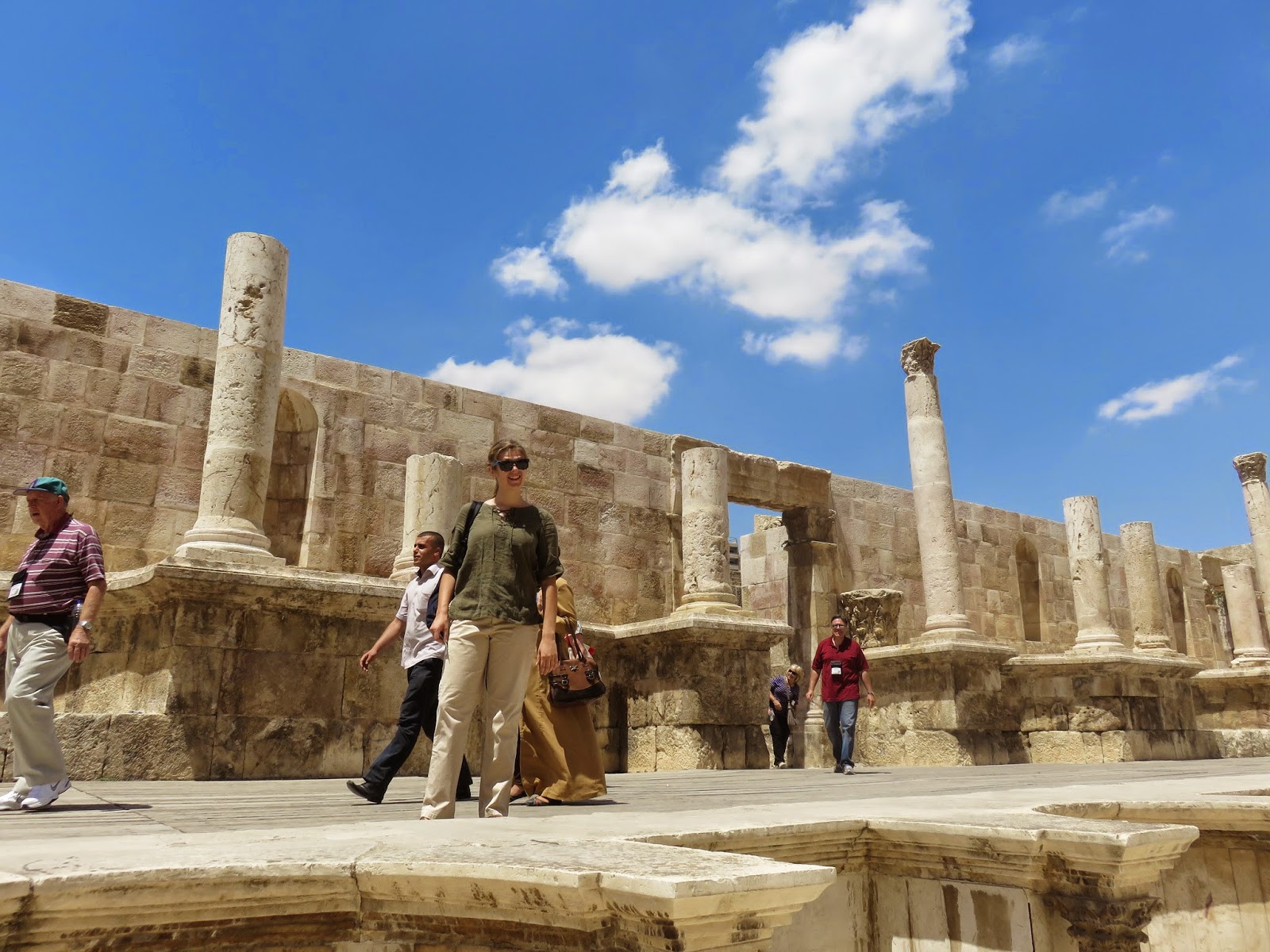 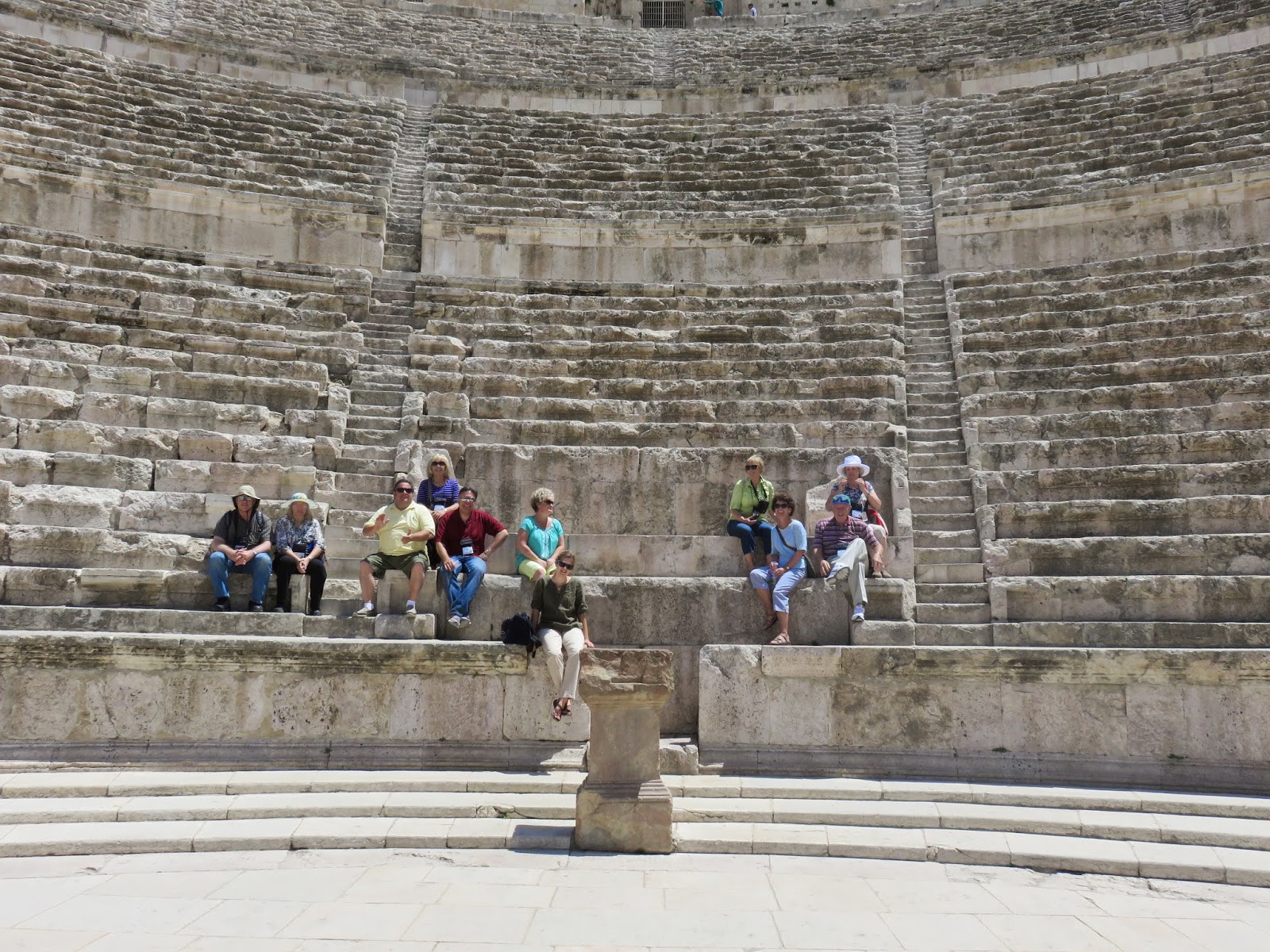 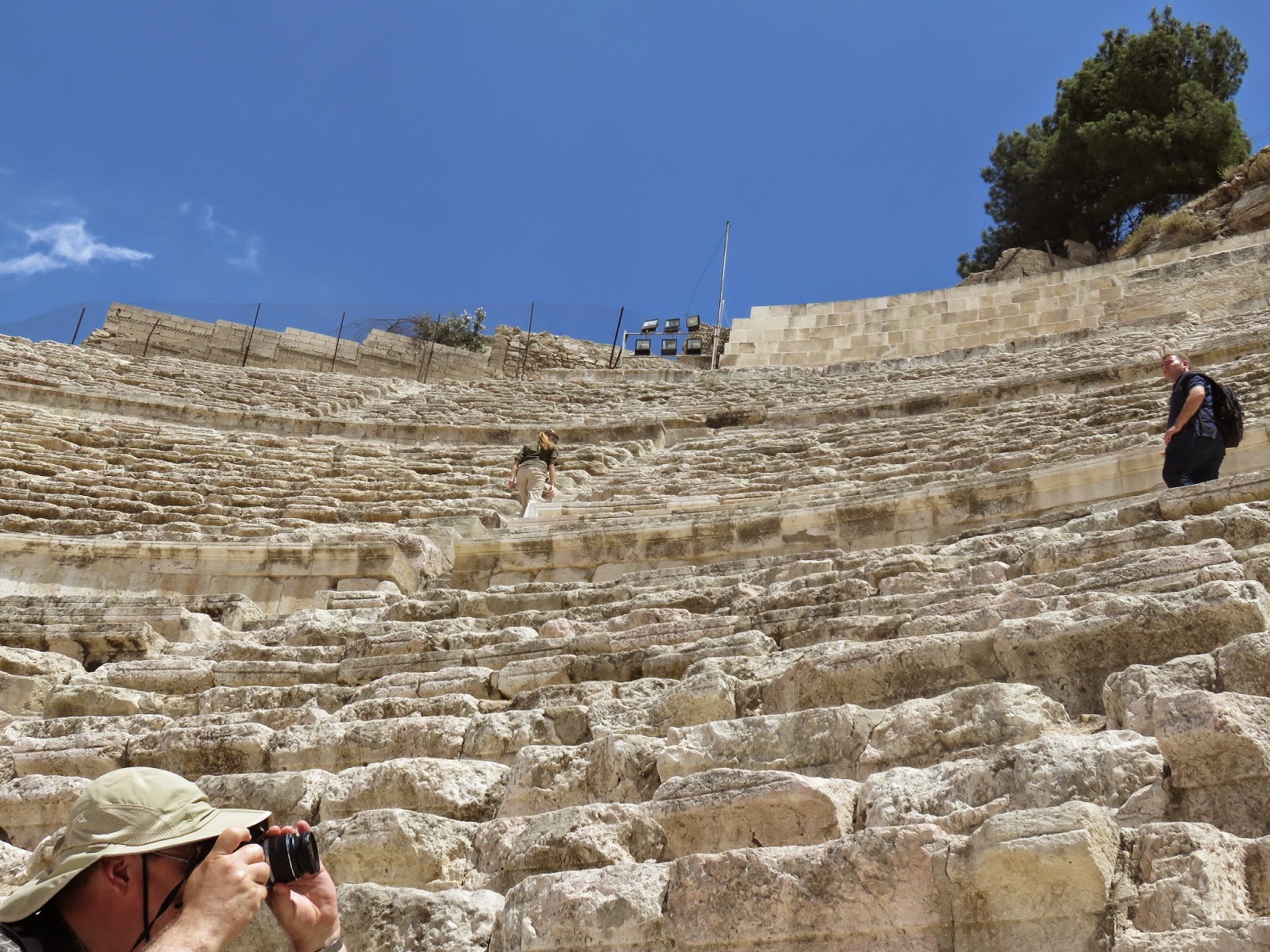 On the way to lunch, we stopped at the King Abdullah I Mosque, which is near the parliament and in that sense somewhat of a national mosque.  Because we were alone inside, I was able to talk to my friends a little about Islam, including the 5 pillars and its relationship to Judaism and Christianity. 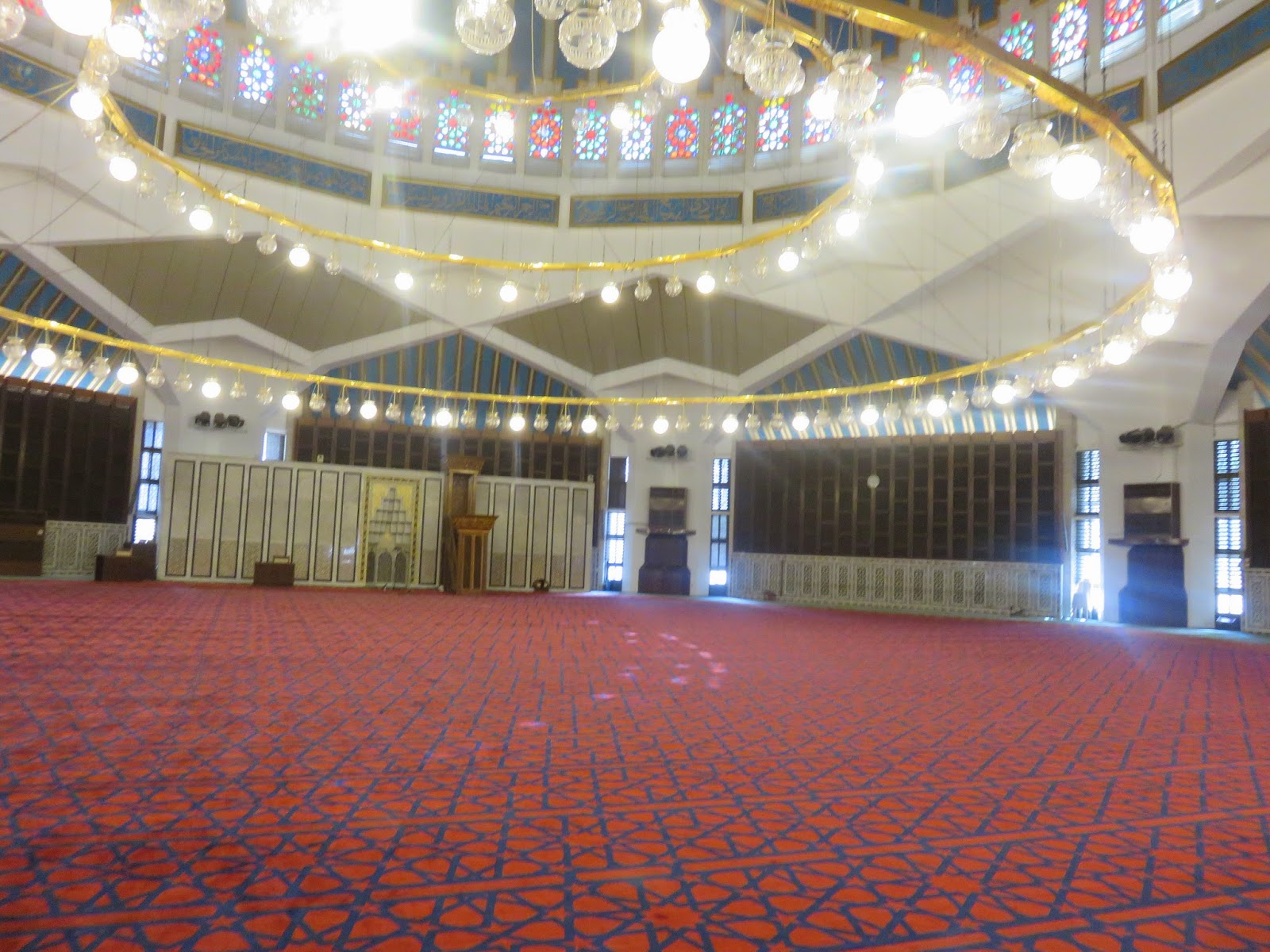 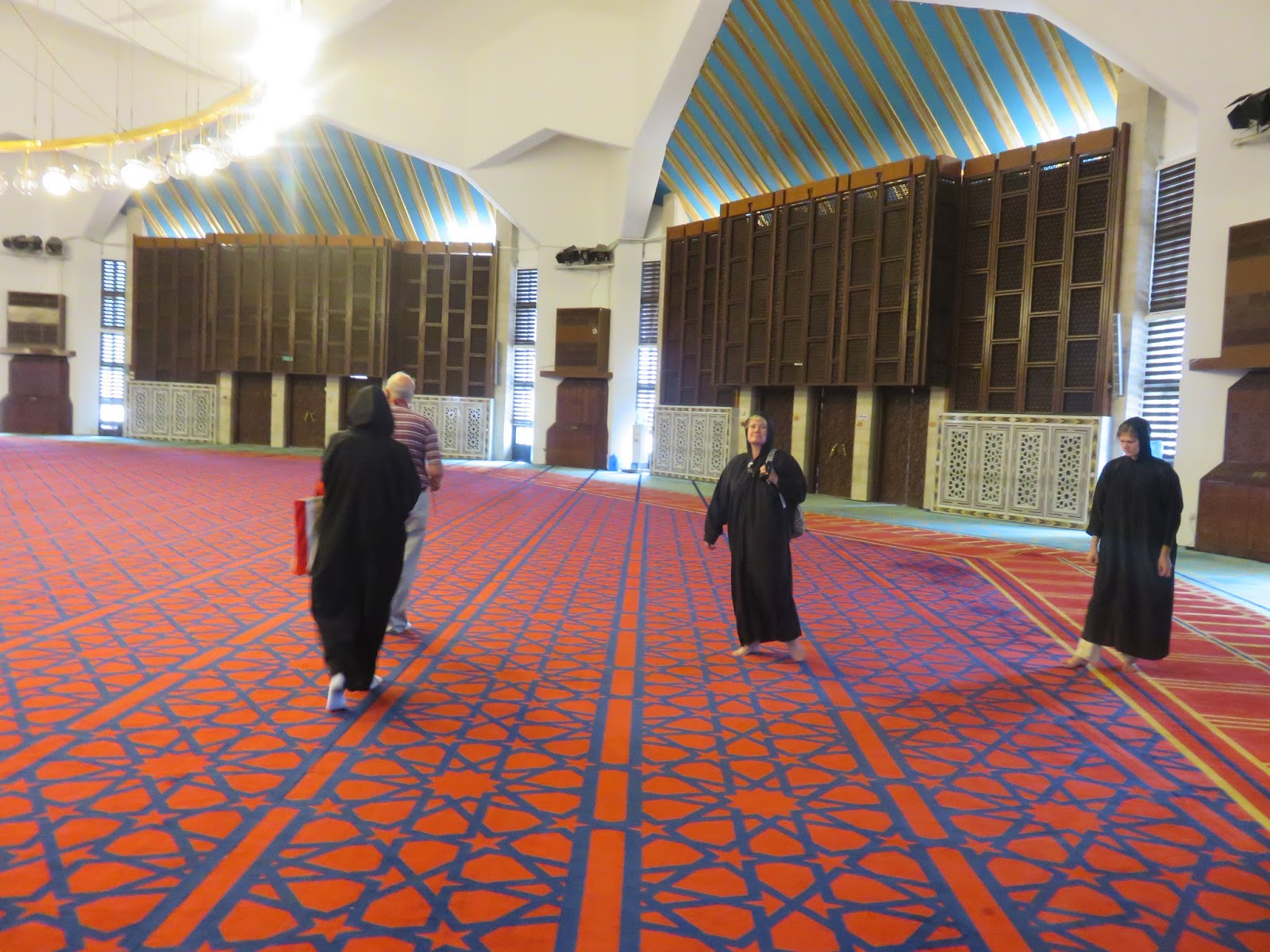 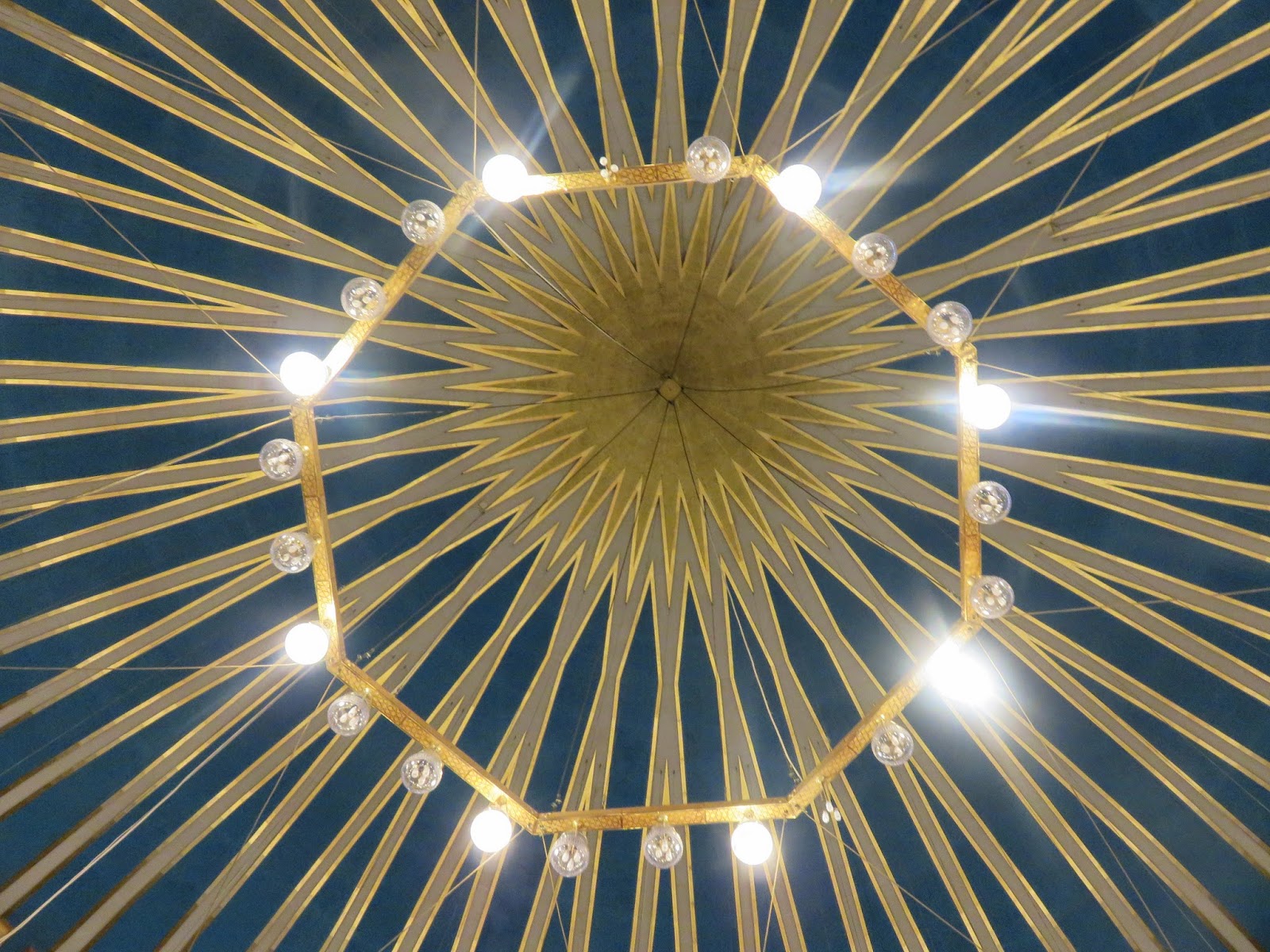 I know some of you have been just waiting for today's food pics.  The food blog continues today with a fulsome late lunch featuring, among other things, traditional Jordanian mansaf, a specialty consisting of yogurt stewed lamb eaten with rice with the right hand (watch the video as Rachel demonstrates!)