For various reasons, the LDS Church here holds its worship services on Saturdays.  I think that this is largely for pragmatic reasons, since all of its members always have Saturday off, though I have mixed feelings about this.  While early Jewish Christians may well have continued to keep the Jewish Sabbath and it is unclear how soon the Church generally began to observe Sunday as its actual sabbath, the fact remains that from the the Resurrection onward, Christians observed the first day of the week as "The Lord's Day," when they met to commemorate the resurrection of Jesus and observe the Lord's Supper.  There is also a small but very old indigenous Christian community in Israel and Palestine that observes a Sunday Sabbath (including a group of local Latter-day Saints in Arab Bethlehem), and part of me wishes that we could exhibit more solidarity with them.

Those feelings on my part notwithstanding, Sabbath (sc. Saturday) services are well-established at the Jerusalem branch of the Church that meets each week in the BYU Jerusalem Center, as well as in the branches in Tel Aviv and in Tiberias in the Galilee.  And there IS something special about meeting on Saturday, that does give us a feeling of connection with Old Testament Israel AND contemporary Israel.

Early yesterday evening, we met the branch president, Mike Ohman, who asked Elaine to speak at this morning's services.  Earlier he had already asked my colleague Jared Ludlow and his wife Margaret to speak as well.  That did not get me off the hook: he happily asked me to sing a solo for sacrament meeting.  My standard line that I "do not like to sing in groups smaller than 300" (an oblique reference to my erstwhile Tabernacle Choir membership) made no impact.  I sang this morning anyway.

Given that Elaine continues to labor under a serious chest cold, jet lag, general feelings of being overwhelmed at needing to manage a household in this foreign land, and suffered from a last-minute wardrobe malfunction, she gave one of the more moving talks I have heard.  After briefly introducing our family, she used as her text Isaiah 53:3-5, testifying of how Jesus had surely borne her griefs and carried her sorrows, and she ended with a reading and testimony of Moroni 7:41-48, talking powerfully about the need for hope in Christ, the pure love of Christ, and being filled with the pure love of Christ.  I am married to one of the most wonderful women I know.

The Jerusalem Center auditorium is an amazing place to have church.  Surrounded by gardens on two sides, the front windows look out over the old city.  At the beginning of his talk, Jared mentioned that last night he had talked to his parents, who have served at the Jerusalem Center several times.  His mother told him that it really did not matter how well he spoke, because everyone would be looking out the windows anyway! To the southeast is a view of the Temple Mount, but throughout the meeting my attention was drawn straight ahead, to the silver-gray domes of the Church of the Holy Sepulchre, the likely place of the crucifixion and resurrection of Jesus.  Though not really visible from where we sat, somewhat to the north of that site across from the Damascus Gate is the Garden Tomb, which many Latter-day Saints and some Protestants hold as the site of those sacred events.

I sang the hymn "God of Our Fathers, We Come Unto Thee."  I thought that would be appropriate with the Old City and the Temple Mount behind me.  I also was asked to be the chorister for the meeting, which made me smile.  Prior to my call to the Choir, I had never held a music calling.  I had always been entangled in priesthood administrative type roles, but it looks like I am now pegged for life as the musical guy.  Only Elaine knew me well enough to know how hard both the singing and conducting were for me.  I felt the spirit in both, but my release from the Tabernacle Choir has left an aching void in my life which my modest musical efforts today did little to fill. 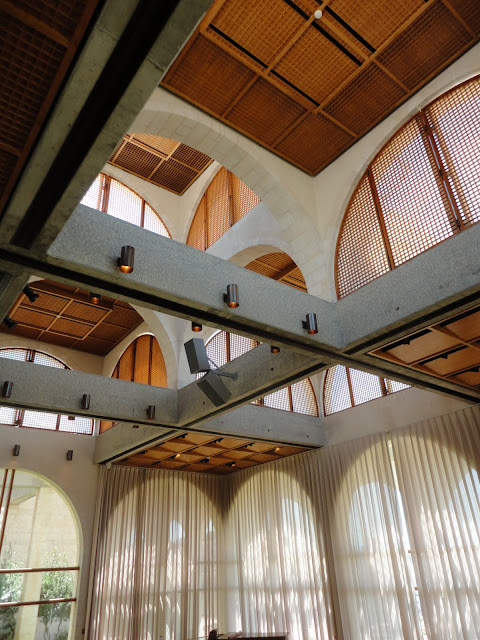 There were naps all around when we got back to our apartment.  While this is a rather typical Sabbath afternoon activity, it was rather ill-advised, because it did not help us any in our adjustment to the new time zone.  Then we had dinner: roast chicken, rice, and peas.  Close to a Sunday dinner at least.  There is even some cherry jello waiting for us later tonight, one of the valuable packages that Elaine sneaked into her luggage for occasions like this.

About 5:30 I took my family on our first walk into, or near, to the Old City.  We left the Center's lower gates and made the walk to Gethsemane, which was longer than I remembered.  I guess that in the past I have been myself or with other guys, and I did not take into account a still sick wife and little boy.  We had some good views of the Temple Mount, the Jewish cemeteries on the slopes of the Mount of Olives, and at last the Catholic and Orthodox traditional sites of the Garden of Gethsemane.


Do not think that the wonderful sites pictured above meant that our first walk along the Mount of Olives was without its challenges.  We started rather late, and we need to be out of Jerusalem by dark each night.  But neither Elaine nor Samuel could (or in his case, would) walk very fast.  And before we even got to Gethsemane, Samuel decided that he did not want to do this and wanted to go back to the apartment.  It was all I could do to contain my disappointment, because these sites and what they represent are so important to me, and I want them to mean as much to my family.  A nice Arab man at the Greek Orthodox tomb of the Virgin saw me trying to console, cajole, and encourage my son and came over and gave him a piece of candy.  He then pointed to me and said, "Good Papa!"

Darkness was falling and we needed to hurry, but the entire walk back up to the Center on Mt. Scopus was uphill.  So I ended up carrying my really big boy much of the way.  Ah, the things family memories are made of.  We now know that we will need to plan these outings differently, taking Samuel on only the shorter ones and checking a car out to drive rather than take long walks.

Along the way the call for evening prayer went out, and since it is still Ramadan, cannons boomed, letting our Muslim neighbors know that they could break their fasts.  It was neat to see many of them sitting on their roofs under Ramadan lights enjoying their festive meals.